Well I did it again.  Marti got me up at 6 am because he just couldn’t hold it any longer.  Once I got him back in I thought I would lay down for a few minutes.  A few minutes turned into 7:30 am.  Oh my!  I normally never sleep that late.  Could I be growing old?  Nah.

Breakfast was absolutely fantastic.  A nice egg, green pepper, cheese, and ham omelette on an onion roll.  Yum, yum.  My usual glass of juice and a couple cups of coffee and my tummy was full and I was ready to go.

First things first, time to vacuum from front to back.  Next, the bathroom.  Then the fun job and one I quickly found out I had let go too long.  The freezer needed to be defrosted.  Turn off the unit.  Place a big bowl of hot water in the freezer.  Wait thirty minutes and then begin scrapping out the ice.  Two hours later I was done.  Take a look, all defrosted. 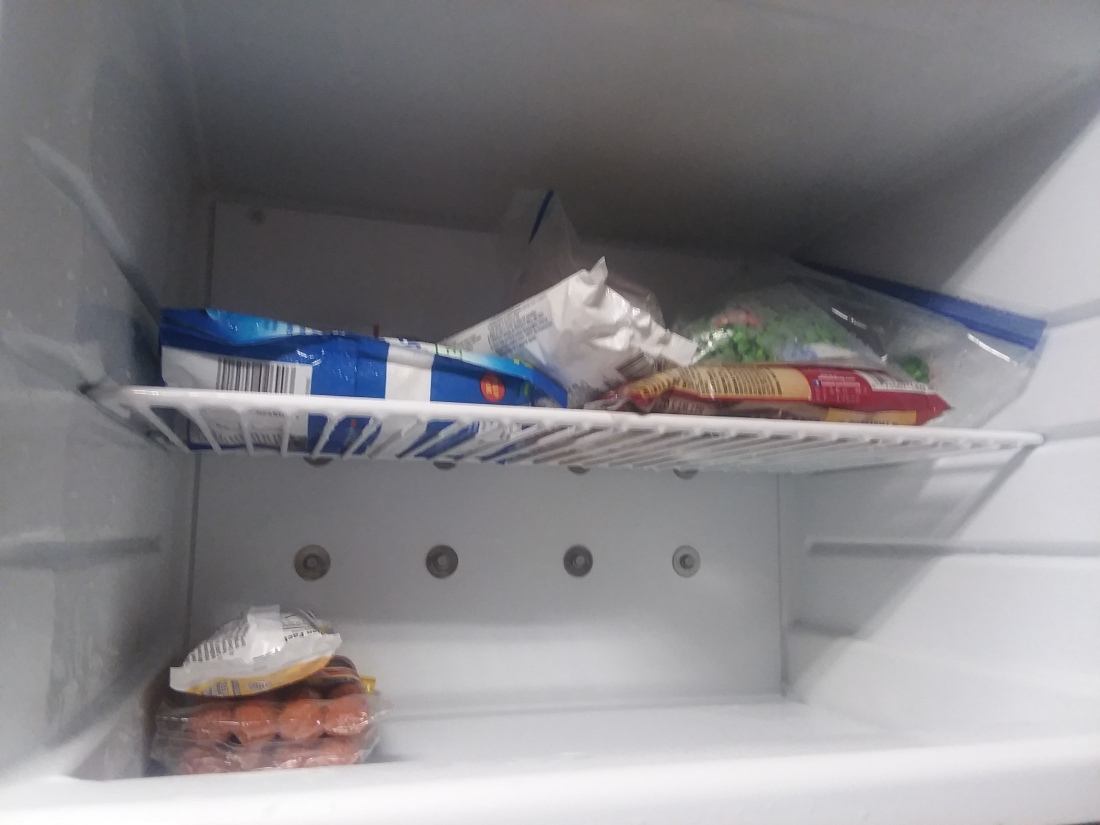 In the future I need to do this every thirty days instead of waiting a couple of months.

Take a look at this.  Just a simple picture but I found it so interesting.  It’s the light from the bathroom night light projected down into and out from the cup underneath.  Kind of

neat I thought and so I took a picture.  OK, maybe it’s just me but I like it.

We have new neighbors – Tom and Julia.  A couple with an older 40 foot Country Coach in a site best suited for a class B.  Believe me it is a tight squeeze.  A couple of us went out to

help get him backed in after he hit two trees on his first attempt.  Took a little bit of doing but as of now the rig is on the site, leveled and all hooked up.  I do hope they stay a bit.

Late afternoon Barbara had a doctor’s appointment in Brooksville so off we went.  She’s had a kidney stone for some time and they wanted to determine how large it is and whether something should be done now or a bit later on.We were in and out within an hour.  Now we wait for the results.

That was our day on The Road of Retirement.  Once again we traveled along, hand in hand, singing our song.  We enjoyed every minute of the day especially since we were together.  Thanks once again for joining us and being a part of our day.  Now, before I say goodnight a thought for each of us to think upon: