Oh yes a white Christmas.  The best kind one can have.  Outside the window.  Me inside

all snug and warm.  Best part, it can all be left behind in time. How did we pull this off? We spent this Christmas at my sister’s in Wellsboro, PA.  Ever the gracious host my sister opened her home to the family and so as many of us as could gather there for the Christmas Holiday.

My mom of course now lives in Wellsboro.  Barbara and I flew in from Florida.  Other members of the family drove from West Virginia and Maryland.  My mom of course had no idea that Barbara and I would be there.  We led her to believe that with my knee surgery being on Dec. 10th there would be no way that I would be fit to travel.  Ah, what a wonderful surprise.  When she saw us she grabbed Barbara in a big bear hug and I thought she would never let her go.  Then it was my turn.  All in all it was really great to be together as a family.  Here are some pictures of our holiday: the Christmas tree with a few of the early presents.  The pile would grow on Christmas eve.

The dining room table set and ready.  In the background is Mikey and Jarrett, two of our grandchildren.

The kitchen island always full of delicious food prepared by my sister.  Trust me, we never lacked for an endless variety of tasty dishes.

Of course there were presents to open.  Imagine getting all worked up over a saddle blanket.  But then again, if you love horses as much as Tori does it sure is possible.  In the background is Amanda’s husband, Charles with the festive hat on.

Jarrett also had his share of presents to open.  That’s his mom Alison off to his side with a puzzled look about what I have no idea!

A picture of Tori and her boyfriend Ryder.  You would be hard pressed to find a better looking couple anywhere.

Bottom line, it was a fantastic way to spend the Christmas holiday.  After all what can be better than time with family and friends.  Add to that the fantastic food my sister prepared.  Every day there was something new, delicious and tasty.  Time now to begin the new year diet.  Yea, sure I don’t think it is really going to happen.  This was in all ways one very special Christmas holiday.

Now, as to flying.  I hope I never have to do it again.  If I can’t get there in the future with Graybeard please count me out.  Ok, the flight out wasn’t so bad.  Except for the early morning departure.  Like 6:40 am meaning we had to leave for the airport at 2:30 am.  Yikes!  Way too early for those on the road of retirement.  Regarding the flight back.  In the seat behind me was an infant that started crying as soon he boarded with his parents and he never stopped until we landed 2 hours later.  I can understand a few minutes here and there but nonstop for 2 hours just put my nerves on edge.  In the future it’s travel by RV or no travel at all.  I hope.

Once home we settled in to what we hoped would be a normal routine.  Not to be.  On the way to physical therapy today Little Graybeard decided to throw another hissy fit.  In the midst of rush hour traffic on Route 75 the car went belly up.  Overheated.  Once again thought the good Lord stepped in.  We discovered George Nahas Chevrolet just 5 miles

away who would be able to take it in if we could get it there.  They also knew of a local towing service, Spencers Towing,  that should be able to help us.  That they did.  Within 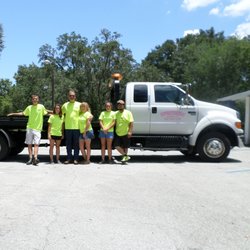 an hour the car was on the flatbed and on the way to the dealership.  What to do for a car in the interim?  Not one of the major rental car agencies had a car available.  Guess what?  When we got to the dealership they had one, just one, the last one, a loaner car available.  Now how lucky can one get?  An hour later they called and let us know what had gone wrong.  The electric fan and all of its components had failed.  How much?  Too much.  $700 for parts and labors.  It is what it is.  Yet, the amazing thing for us is, once again when in need, doors opened and problems were resolved.  Thanks God.

All in all the days past, even today, have been great ones on The Road of Retirement.  Sure, our wallet is a bit lighter but things are being taken care of in a timely fashion.  We could have been left stranded but once again we were not,  So we continue to travel along, hand in hand, singing our song giving thanks for the blessings that are ours.

Thanks for joining us today.  We hope you had a great Christmas holiday and that today as well was a great one for you.  Time now to wrap things up but before I go a thought for each of us to consider and ponder:

One thought on “December 27th, Thursday – A White Christmas; Only In An RV; Little Graybeard throws another Hissy Fit”