A Great Day With Great Friends

Yes, today was Sunday.  Yes, we were supposed to go to church.  No, we never made it.  Nothing wrong we just couldn’t get moving.  All I remember is saying I’m going to lay down for a few minutes and the next thing I knew church was long past!  It happens sometimes like that.

With nowhere to go and nothing really to do we just hunkered down and threw some blankets on to keep warm.  We’ve dropped over 30 degrees since yesterday and it just feels cold.  I know, nothing like those up north are putting up with.

Barbara and I decided lunch at Cracker Barrel would be her treat today.  We also decided

that it would be really nice if Steve and Patti could come with us.  I walked down to their rig and when I got there I was lucky enough to find that Steve had just made a fresh pot of coffee.  So I sat and had a cup of coffee and jawed for a bit.  I asked them to come with us to Cracker Barrel and they were more than willing.  Fantastic.

A few hours later we all gathered together and we were off to Cracker Barrel.  The wait at the restaurant was not long and so within a short period of time we were all sitting down to our afternoon meal.  This restaurant remains a favorite of ours.  You always get a great meal with super service.  So we filled our tummies and then decided there was only one thing left to do – go for ice cream!

Where to go?  We all had the same idea at the same time.  We were going to a Wisconsin original that is now in Florida, Culver’s.  Their story is simple.  In 1961, George and Ruth 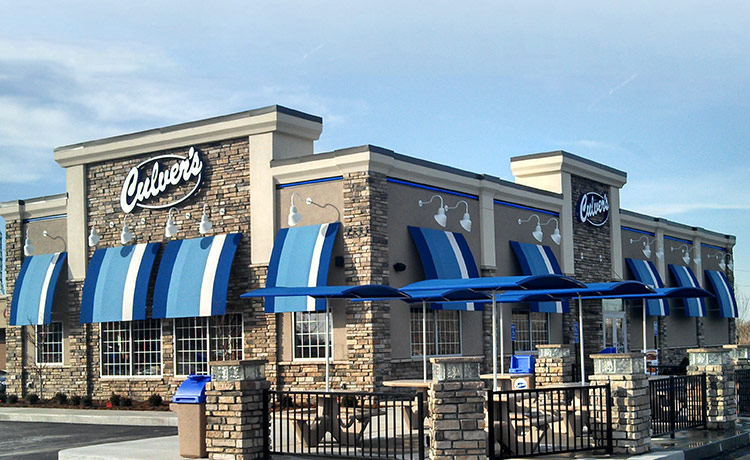 seized an opportunity to buy their first restaurant. With no formal training, only Ruth’s warm and gracious hospitality and George’s natural command of the kitchen, the two proved a great team. With their kids growing up serving guests and learning firsthand about hospitality and delicious food cooked to order, the Culver family’s team approach became the model of many successful restaurants and supper clubs to come.  Then, in 1984 came an idea for a restaurant no one could resist. Craig combined a love for his mom’s homemade hamburgers with his favorite childhood vacation treat, Fresh Frozen Custard.  The rest as they say is history.

Here we are at their new store in Brooksville.  This is just after we polished off our treats.  Do you think we enjoyed ourselves?  You better believe we did!

This store is so new it still has the new store smell.  It was a great choice to end our time out.

We came back home and settled in for a bit.  Tonight the NHRA finals would be aired on FS1 and I invited Steve down to watch with me.  We are both true gear-heads and big fans of drag racing.  At 7:30 pm we each grabbed a chair and sat back to enjoy the races.

That was our day on The Road of Retirement.  It was a great day with really great friends.  It’s days like this spent with great friends that make this RV lifestyle absolutely priceless.  The day is now done, the races are over and so it’s time to call it a night.  Thanks again for traveling with us we’ll see you again tomorrow.