Another work day, another cold day by Florida standards.  It was only 58 degrees and raining when we woke up this morning.  It was not what we had grown used to that’s for sure.  It was what it was though and nothing was going to change it so we dragged ourselves out of bed, had a quick breakfast, dressed and got out the door.

There wasn’t much on the list of projects today which meant the morning was going to drag.  Barbara was assigned a CS worker and she was able to find a few things for the two of them to do.  That meant, however, that I was now on my own and having to find things to do.  Well, I found a few, at least enough to pass the required three hours.  I was glad when 11 am finally came around.

After work it was off to the VA Benefits Center.  My counselor wanted me to file for benefits that might be due me.  She was optimistic and encouraged me to get the process moving.  Well, nothing ventured nothing gained.  So we completed the first step today.  The next will be appointments with several doctors and a hearing before the compensation board.  Hopefully this will all occur before we leave Florida at the end of April.

Done with the VA we were now off to the Villages for a concert at the Savannah Center.

The Savannah Center is a performance and exhibition theater with a large stage for musical performances and off Broadway shows and a large floor space for formal and casual dances.  This is a look at the lobby as you enter and the entrance to the theater. 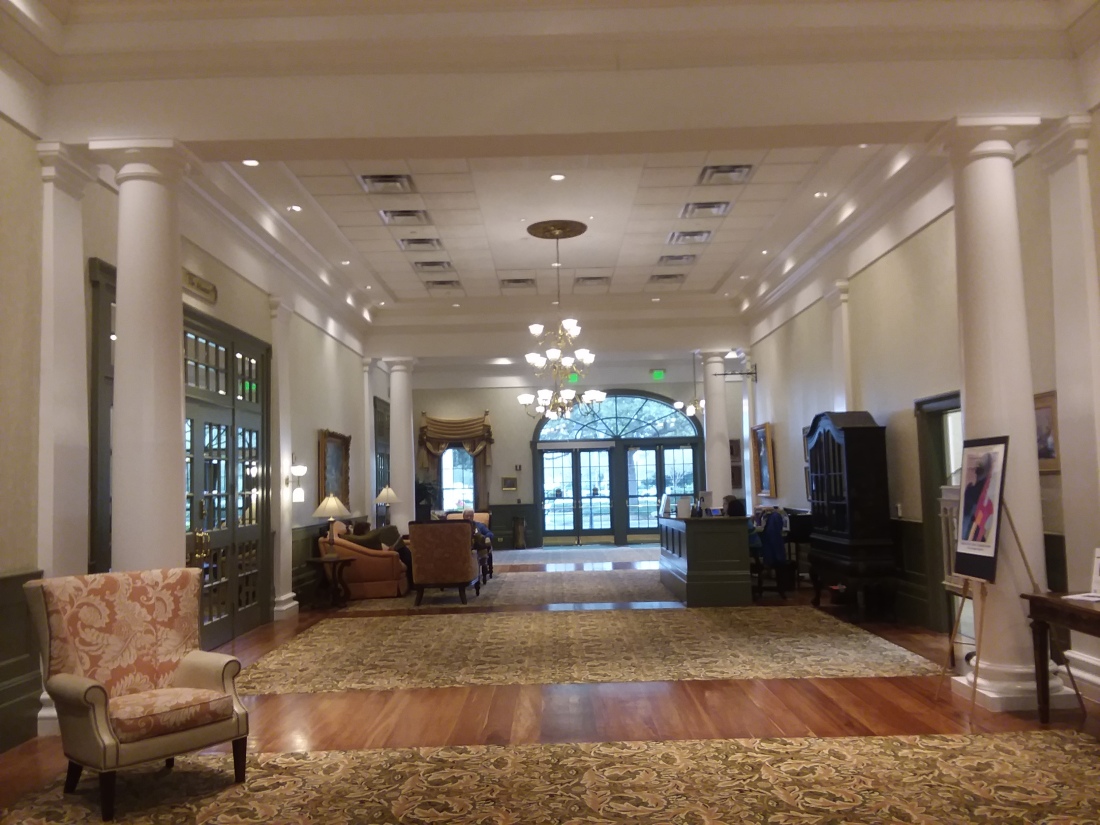 This is the empty theater before the afternoon performance.  There is also a huge ascending balcony at the rear of the theater.

This was the theater at show time.

This afternoon’s concert was by The Wisconsin Singers. 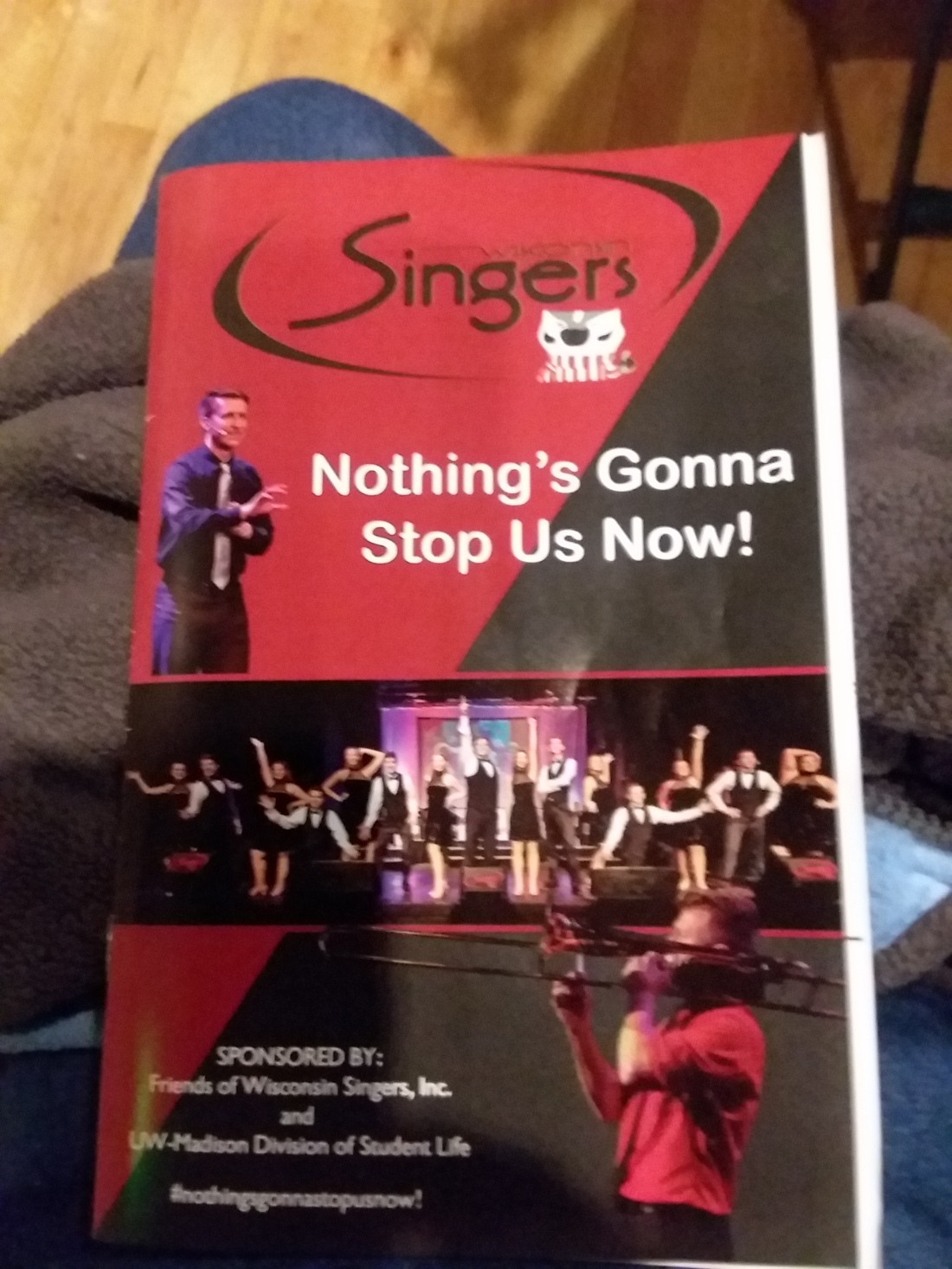 Featuring the top talents from the University of Wisconsin-Madison, Wisconsin Singers entertains more than 50,000 annually with stellar vocals, stunning choreography and spectacular big band sound from the past forty years.  Recognized as the very first collegiate pop music ensemble that features song, dance, and live instrumentals, Wisconsin Singers has been touring the country since 1967 with brand new shows each year, created to engage audience members of any age.

This afternoon’s performance featured a 9 piece band and 18 singers and dancers.  What we both found so absolutely amazing is the band never used a piece of sheet music, everything was played by rote.  The same for the singers and dancers.  We’re not talking about just a few songs either, take a look at the line up of songs they performed. 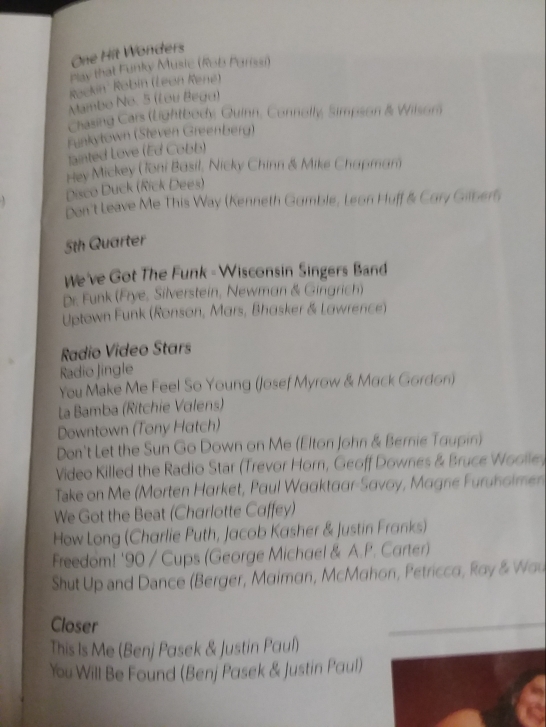 Two things we learned, though, up front.  The Village crowd is not a jeans and t-shirt crowd.  And when they asked those in the audience from Wisconsin to stand up we were probably the only two who did not!  After all, they were the Wisconsin singers.

That was our day on The Road of Retirement.  Once again we traveled the road our preferred way side by side, hand in hand, singing our song.  About that hand in hand we were sitting in the theater holding hands and a woman actually came up to us and said it’s so nice to see the two of you holding each other’s hand.  Now how about that.

Once again thank’s for traveling with us.  As always we enjoyed your company.  Hope to have you with us again tomorrow.  Till then, time to say goodnight.