Searching for the Gopher Tortoise

Yup, we were on the work schedule again today.  This morning was cold and foggy so much so that once again you just wanted to burrow deep under the covers.  But alas duty called so it was up and at it.  A quick cup of coffee, another to take with us, sweat shirts, ski caps and we were on our way.

Barbara already knew what she would be doing, and that was gate house duty.  There were two large groups coming into the park this morning.  Armed with a book for those idle moments between cars coming in she was prepared.  Thankfully, there is a small heater in the gate house so she managed to keep warm until the temperatures began to climb.

On the other hand I really didn’t have a thing to do.  But I got creative and managed to find a couple of things to keep me occupied.  I took the leaf blower and cleaned the last remaining parking lot that we had missed yesterday.  Then it was time to go on tortoise patrol.  Off to the nature trail I went to see if I could find a tortoise or two.  And I did!

What is a gopher tortoise anyway? Is it just a fancy way to say “turtle”? Well, actually, there’s a meaningful difference between tortoises and other turtles.  The most important thing to remember about tortoises is that they are exclusively land creatures. They live in a variety of habitats, from deserts to wet tropical forests. (Unlike most sea turtles, which take to land only when they are laying eggs, tortoises don’t have much to do with water other than drinking it and occasionally bathing in it.)

In Florida gopher tortoises are long-lived reptiles that occupy upland habitat including forests, pastures, and yards. They dig deep burrows for shelter and forage on low-growing plants.  They usually have more than one burrow, often times upwards of 30 or more.  They share these burrows with about 350 other species of animals.

Moving on, also out today was the bald eagle.  He was over the rig soaring through the air for several minutes.  Unfortunately, I was unable to get his picture.  But he was there.

Work over, more like fun really, it was back to Graybeard for me.  I walked Marti, changed and then started checking off items on the Countdown List.  Today I was able to wash the windshield and cabin windows inside and out.  I also washed the starboard side windows.  I was also able to vacuum inside from front to back.

Before I could go further we received an invite from Steve and Patti to come on down and finish our game of Mexican Train we started over a week ago.  They also invited us to stay for burgers plus for supper.  This is their rig which is only a year old.  That’s them in the doorway.  Barbara had just arrived.

Barbara and Patti at the table playing Mexican Train.

We finished our game of Mexican Train and moved on to burgers plus.  Steve once again came through with some excellent burgers.  We added baked beans, potato salad, chips and spiced dilly beans from The Richloam General Store.  An absolutely excellent meal! 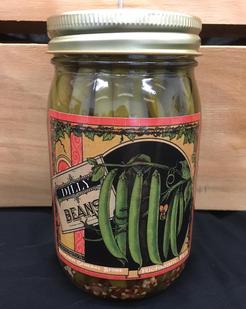 That was our day on The Road of Retirement.  It was a great day spent with great friends.  Laid back, relaxing and filled with great food.  It just doesn’t get much better than this.  These are the days that we will remember forever.  Truly, God has blessed us in ways more precious than gold and silver.   We’re really going to miss not being here with them next year.

Thanks again for joining us on our journey.  We enjoyed having your company.  Join us again tomorrow and we’ll take you along with us again.