Home Is Where We Park It:  Mike Roess Gold Head Branch State Park

This morning was a bit on the cool side, if you could call temperatures in the low 60’s cool.  The sky was clear, absolutely no whisper of a breeze, humidity was low and there was not a hint of rain anywhere.  The morning held the promise of another fantastic day and it would not disappoint.

Breakfast was in order and so I reached into the refrigerator and grabbed the other half of my Clyde omelette.   Into the microwave it went.  Once heated I found it to be as good today as it was yesterday.  A glass of orange juice and a couple of cups of coffee rounded things out.

Time to determine what was on the agenda today.  The Wishy Washy was a must as we were finally running low on clothes.  We also needed to pick up a few things at the grocery store.  I, myself, wanted to straighten out a bunch of files on my computer.  We needed to get a copy of our route for the year to our kids – they claim they just want to know just in case where we are.  Just in case, what’s that mean?  They’re bored and want to visit?  NOT!  I keep moving just so they can’t find us.  Only kidding.  The awning also needed to be taken down and cleaned.  In essence, we had a few things to do.

The first part of the morning and early afternoon this is where I parked myself.  This is

my computer station in the solarium.  I usually work here while Barbara works at the kitchen table.  In this way we each have our own individual space and don’t bump heads, or elbows, knees or toes!  I worked on cleaning out my email and rearranging a bunch of files from last year.  I still have a lot more work to do.  Barbara put together a Word document of our 2019 route for our kids.  Enough for now.

We headed into Keystone Heights to the Wish Washy.  The first one we stopped at was the pits.  It had all old machines, everything was dirty and there was an awful smell in the air.  We walked in, almost gagged, and immediately turned and left. On to the next one.  This was more like it.  New machines.  No smell.  And it was clean and neat.  This was it.

Even better there was a supermarket right next store.  A real supermarket called Hitchcock’s.  Hitchcock’s Supermarkets has been proudly servicing North Central Florida 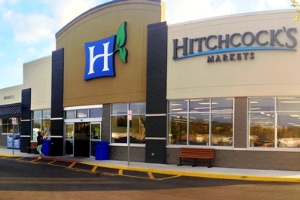 for 67 years. Right from the start, Bob Hitchcock saw the need for food stores in rural Florida. In 1945, he made his dream happen when he opened his very first store offering only the very finest quality foods money could buy with good old fashion service for his customers. The Hitchcock’s company continued to grow over the years to the 10 current store locations located across the central part of Florida.   We’ll vouch for the fact that it is a super store, clean, well stocked, friendly customer representatives and reasonable prices.

It was time to find some place to eat.  We were going in search of real, NY, thin crust pizza.  In Florida you ask?  Yup.  Once again we went with a local recommendation.

Brooklyn Boys we were told is where the locals go. The restaurant was originally established in Lake City, Florida in 2007.  Nick and his two brothers began the business but soon the two brothers moved on leaving Nick to build the business alone.  Nick eventually married and his every supportive wife persuaded him to move the restaurant

to Keystone Heights.  It has continued to grow and expand since it’s move here.   We were

here for the pizza, and why not some garlic knots.  They both were delicious.  The pizza was really a NY thin crust pizza which is what we both always look for.  Being able to find it here in Florida in this small little community was a fantastic find.  Once again it is always best to listen to the advice of the locals, especially when it comes to food.

What amazes both of us is how in reviews written by those who have been to this park before, they state there is nothing in the area to do.  There are no good places to eat.  No supermarkets.  Nothing.  Guess they never thought to ask and learn.

Once again we had a full day.  Of course a number of things didn’t get done today but there is always tomorrow.  There is also a number of places here in the park we want to scope out.  It’s amazing how much we missed our first visit here.  Not this time.  Just waiting for my new camera and then I’ll be out and about.  Count on it.

That was our day on The Road Of Retirement.  The day did not disappoint.  We got done what we could and will start again tomorrow.  After all when retired why rush into today what you can put off until tomorrow!.

Thanks once again for joining us and we hope you will join us again tomorrow.  We always appreciate your company.

One thought on “TOUR AMERICA 2019: NORTH CENTRAL RIDGE OF FLORIDA”