A River Runs Through Site #34

Happy Mother’s Day to all mothers and all those who are a mother to others, caring, loving and nurturing those around them.  A special shout out to my own mom who was always there to show me the way, there to support me, there to love me, there beside me to help make me the person I am today.  Love you mom.

This morning  started out rather calm, no wind, no rain, just overcast.  Then it started to get dark, I mean like nightfall had come.  The rain began, just a gentle drizzle at first.  Then just like that it all changed.  Total darkness.  Sheets of rain coming almost horizontal.  Thunder and lightening.  We had it all.  In no time we had a river running under Graybeard.  It was like this for close to an hour.  Then just as quick as it started it stopped.  If this is what people in the southeast are going through my heart definitely goes out to them.  One good thing, due to the fact that our site is all sand the water disappeared as quickly as it came.

It’s Mother’s Day so I decided to treat my sweetheart to breakfast out.  Where to go?  Since we were new to the area I had no idea of what was around.  Let’s try Yelp.  Several possibilities popped up in Fairhope.  Time to go exploring.  The first place we stopped at was The Cereal Killer that was housed in The Mill.  With only four items on the menu and

none of them even recognizable to either of us we decided to pass on this place.  We pulled up Yelp again and discovered The Broken Egg that was right around the block.  Off we went.  They had a 90 minute wait time which was not for us.  Two down.  Would the third be the charm?  It was just down the block from where we had parked so we decided to walk.  Fairhope we discovered is a neat little town.  It appears alive and well with all kinds of local downtown shops.  Here’s our third choice, Julwin’s.

According to the front window

As soon as we walked in we knew we were at the right place.  It had that old southern down home feel.  Everyone was polite and oh so gracious and helpful.  Even better only a ten minute wait.  Of course while waiting I struck up a conversation with a gentleman who shared with me that this is the place that he and his wife come to every Sunday after church.  Trust me he said  you will not be disappointed.

Oh how right he was!  I had the meat lovers omelette and it was big. 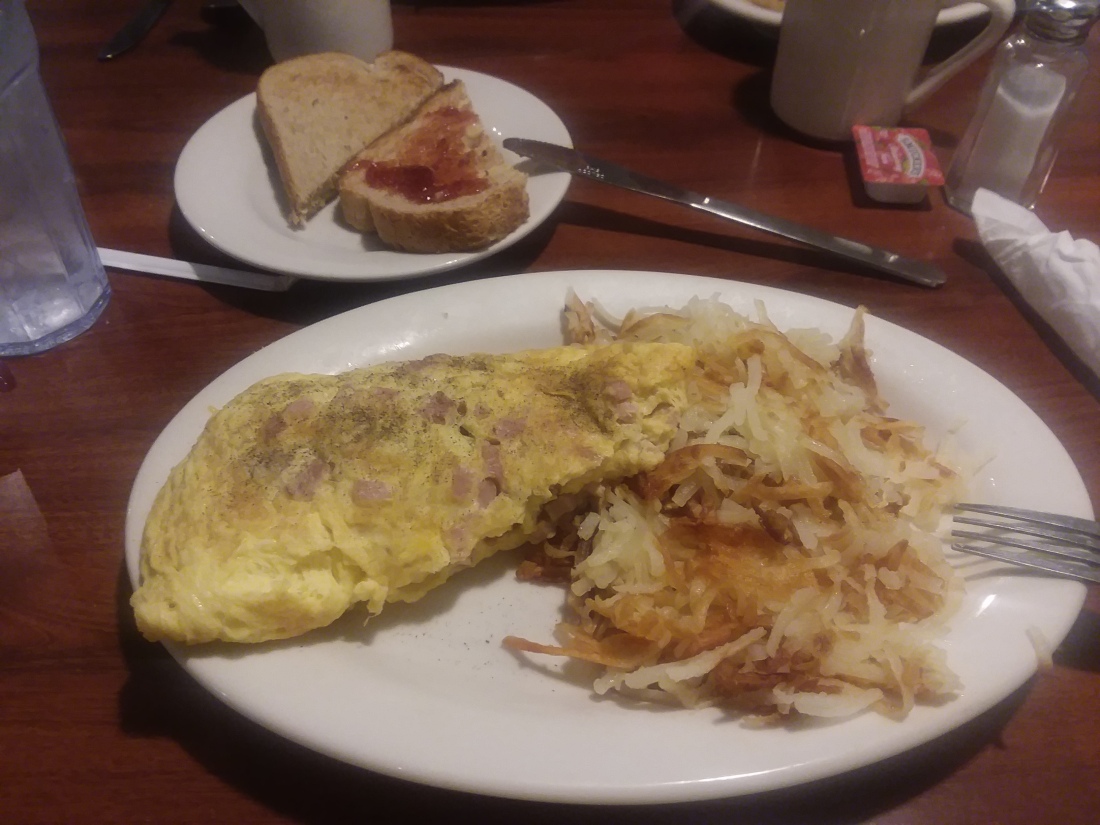 Big and delicious right down to the last bite.  Oh yea, I finished it all. 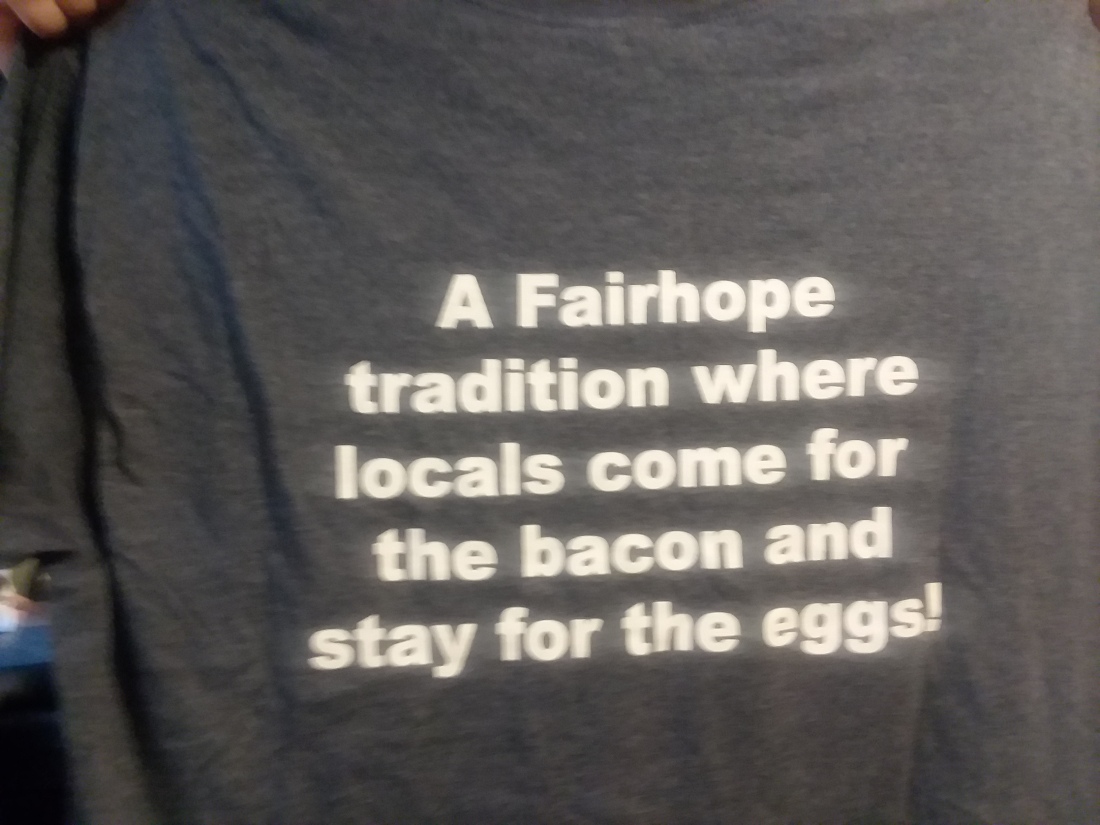 Let’s go back now to the National Naval Aviation Museum and another specific exhibit.

The first thing we discovered was the difference between nonrigid and rigid airships.  Nonrigid airships are kept inflated by internal air pressure.  They are basically large controllable balloons  that have an engine for propulsion, rudders and elevators for directional control, and a car suspended underneath to carry crew and passengers

A rigid airship as their name implies have an internal framework.   The framework holds up and supports the shape of the ship.  In general rigid airships are only practical when longer than 360 feet.  This is because of the weight of the internal frame which would be to heavy for anything smaller.

An inside look at a rigid airship.

One of the first and most successful airships to operate with the Navy was the U.S. Los Angeles also known as ZR 3.  Constructed in Germany in 1924 it was then flown to the United states.  Of the five rigid airships originally in the Navy’s fleet it is the only one whose service did not end in an accident.  It flew a total of 331 missions and was taken out of service in 1932.  The Shenandoah was not so lucky.  Its career ended in 1925 when caught in a storm over Ohio.  It plunged to the ground with the lost of fourteen of its crew members.

During WW I airships patrolled the shipping lanes in search of German U Boats and mine fields.   No U-Boats were ever sunk by an airship but their service was deemed a success.  All in all, the lighter than air operations during this time provided the foundation for the development of more efficient airship designs in the future.

During WW II airships were viewed as one of the most dependable forms of aircraft in the Navy’s service. 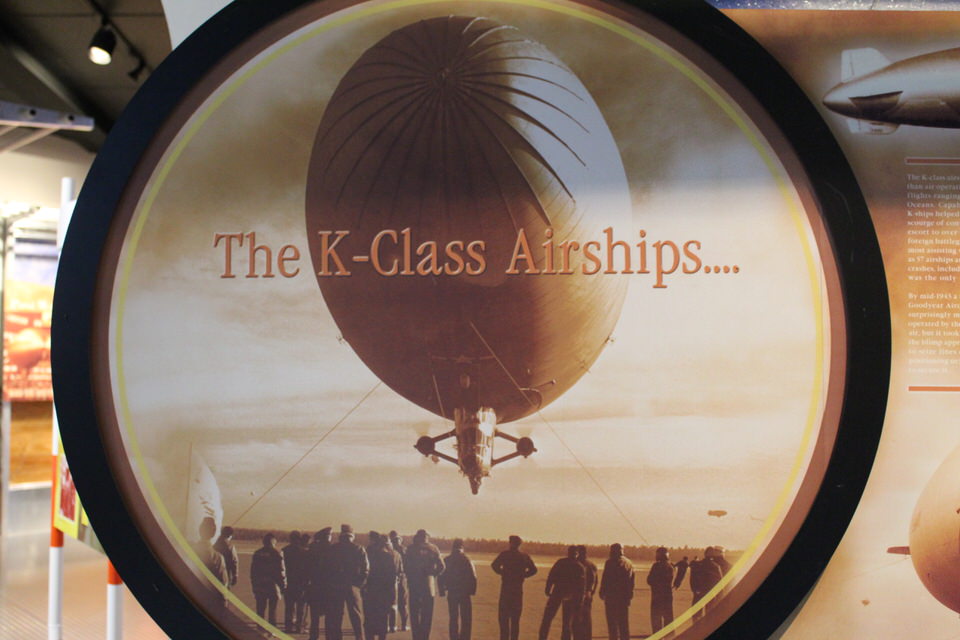 By mid 1943 eleven K class airships were rolling off the assembly line each month.  More K ships were produced by the Navy than any other airship.

It typically carried a crew of 10 but  it needed a crew of 40 to successfully attach it to its mooring mast.

Their crews made more than 57,000 flights over the Atlantic and Pacific oceans.  Capable of staying in the air for up to 26 hours they help stymie the German Wolf Pack attacks by providing safe escort to more than 80,000 Allied ships carrying men and material to foreign battlefields.  They also logged some 320 rescue missions.  During the war 37 airships were lost along with 72 crew members.

This is the control car of K-47 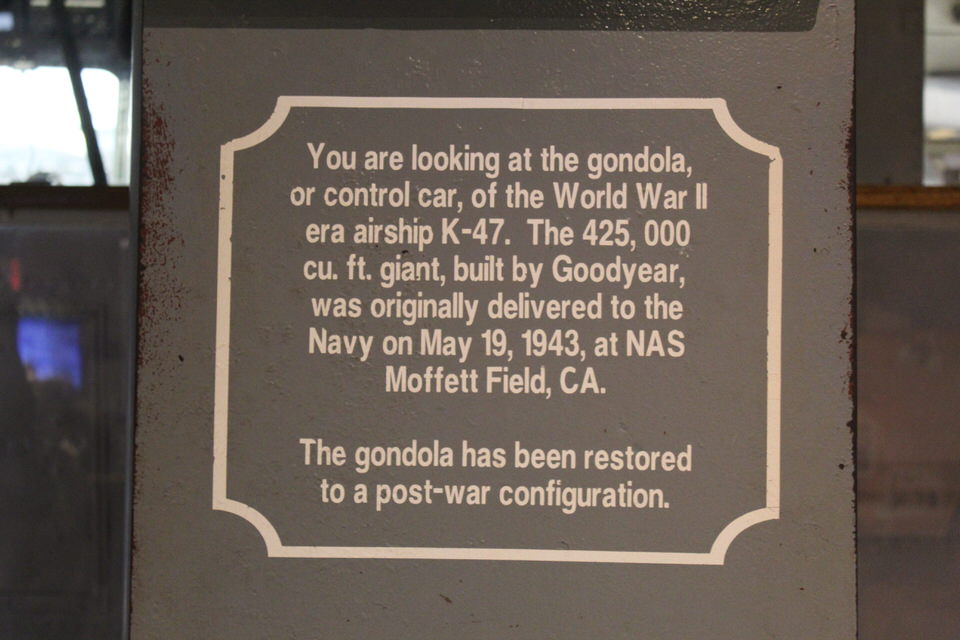 The cockpit in this photo is to the right.  Crew’s lounge is to the far left. 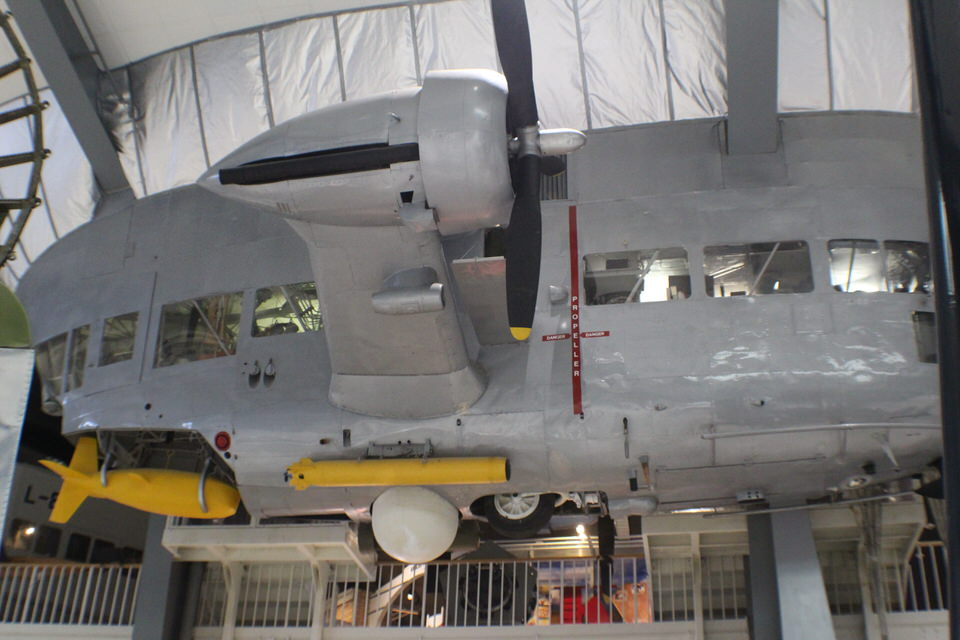 A better view of the cockpit. 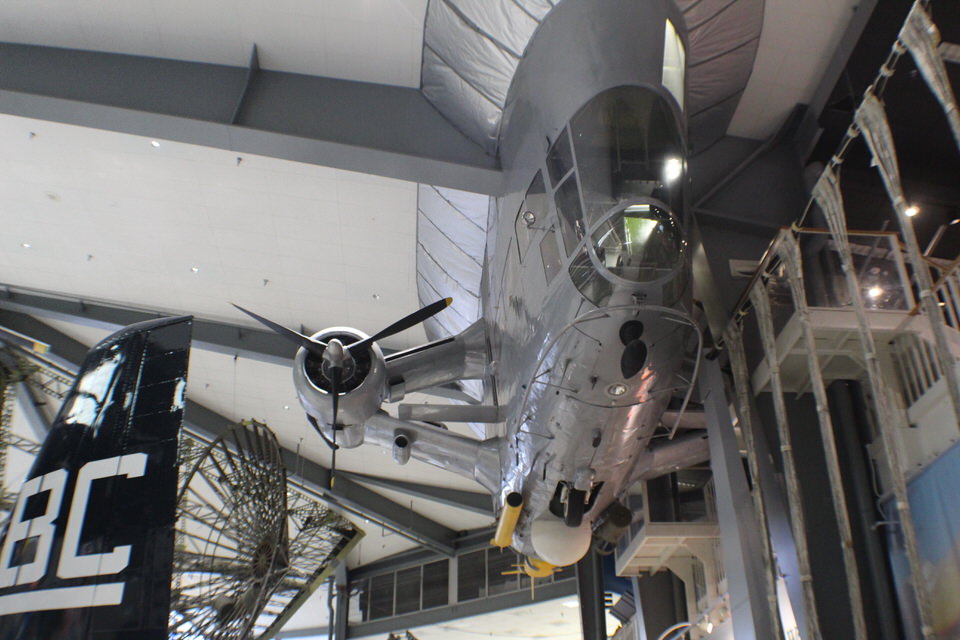 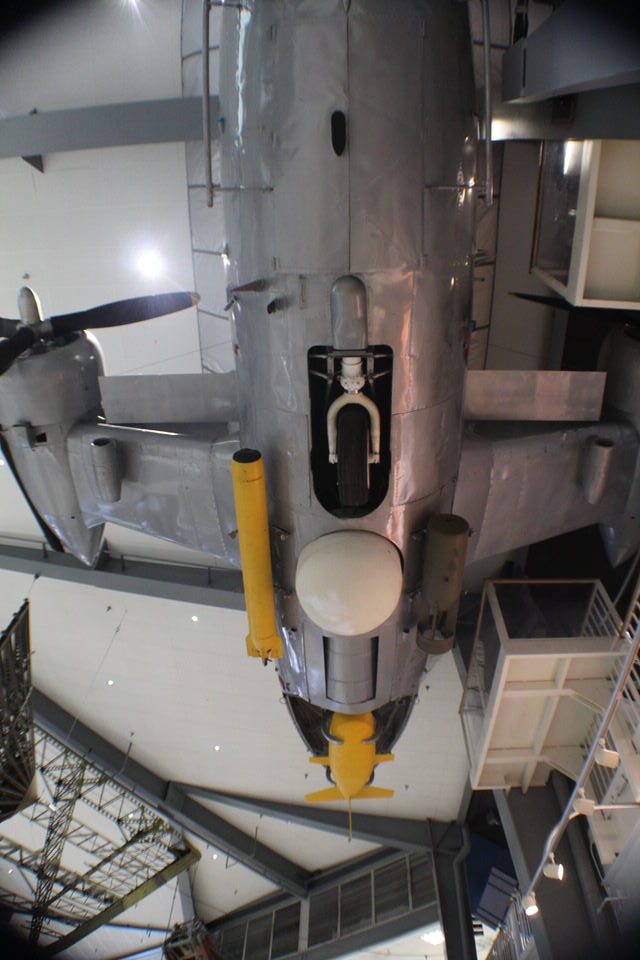 From the outside to the inside.  First the cockpit.  What a view, especially when compared to the cockpit of a plane.

Navigation, communication and bombadier.   Someone it appears liked coffee.

Come on now, do you really think they might forget how to fly the airship.

The Galley.  Do you see the hand mixer?

In 1961 the Navy announced plans to end the lighter than air service.    In August of 1962 a Navy airship took to the air for the last time from Naval Air Station, Lakehurst, NJ. 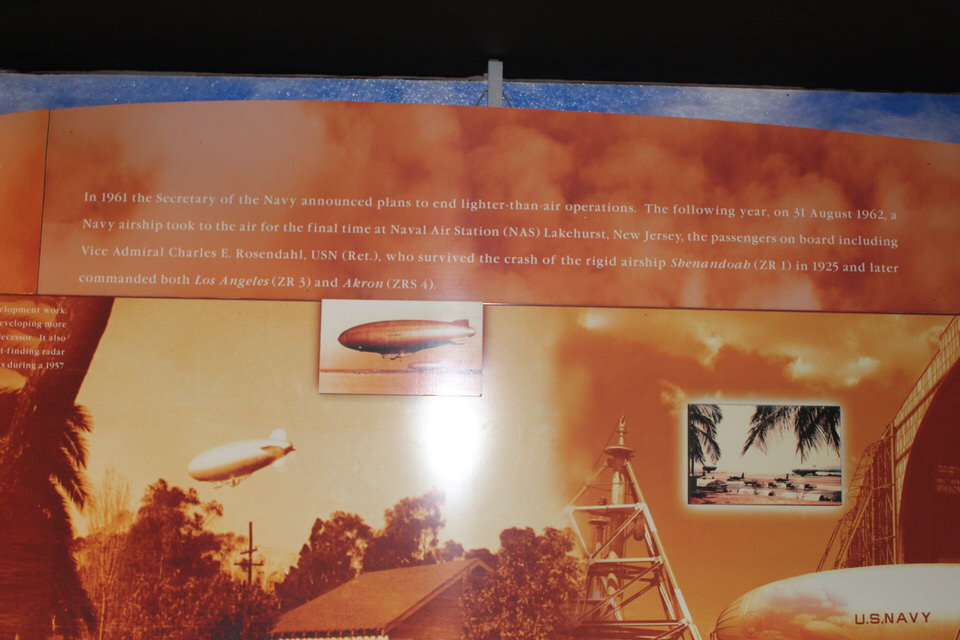 Finally, we end with what even today remains a mystery.  On the morning of August 16, 1942 airship L-8 took off on a routine flight.  On board were the pilot and copilot.  They set a course out over the vast Pacific.  After reaching their station they reported that they were investigating a suspicious oil slick.  A little while later L-8 was observed slowly descending and finally snagging on a light pole in a suburb of San Francisco.  Investigation revealed that the classified documents usually carried on board were still behind the pilot’s seat.  All controls were properly set for a routine flight.  But no one was on board.  To this day the two men have never been found nor is there any idea what happened to them. 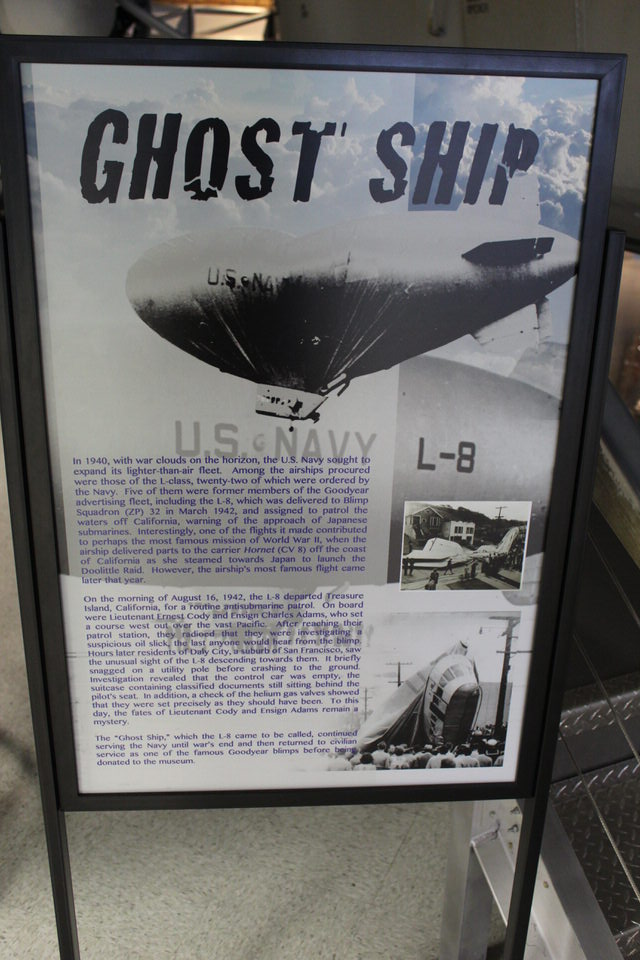 That brings to an end our day on The Road of Retirement.  A rocky and wet start that ended with a beautiful blue sky.  One can’t ask for more than that.  Oh, remember we went out to breakfast this morning?  My conversation with the gentleman while waiting?  I shared with him that we lived full time in an RV and traveled the country.  Just after we were seated his wife approached us and said in so many words  I just want to tell the two of you I believe what you are doing is fantastic.  If only more people would dare to follow their dreams.  Continued safe travels and have the time of your life.  Now how about that!

Thanks again for travelling with us.  Come join us tomorrow as we venture out again.