Time to move on.  So we were up and at it early this morning.  Barbara had an early morning chiropractor appointment so she had to get up and out.  She would be doing her thing when she returned.  While she was gone I continued to pack up outside and get things in order.

The night before I decided to conduct a bit of an experiment.  I was never really sure if the sensors on the black tank actually worked.  Only one way to find out.  I dumped the tank.  Then I put in Tank Blaster which is supposed to be a super duper tank cleaner, put the flow gauge on the input for the rinser and began to fill the tank with water.  Lo and behold 56 gallons later and the gauge inside indicated. that the tank was full.  Since it is supposed to have a capacity of 65 gallons I now know that even when the inside gauge says it is full, I still have a few more gallons to go.  I then dumped the tank again this morning and can now say in the immortal words of the Charmin commercial It’s clean.

Barbara returned by the time I was done fooling around and we both went to and in no time at all we were packed, slides in, jacks up, car hooked up and ready to rock and roll.  The big question now was What kind of traffic would we run into?

Once on I 10 we found traffic light and moving at the speed limit.  By and large the ride was rather boring.  Almost.  During our three hours on the road I was probably cut off more than I have in the last 18 months.  Twice someone tried to get in between the rig and the car.  Several times cars came flying from the far left lane across the front to make an exit.  It was a rough ride.  Only in New Orleans did we encounter any measurable traffic.  That was only for the last mile before we got off at our exit. My fears about Memorial Day traffic, thus, were unfounded.  Dumb drivers are out there every day.

Then even more fun.  I had read many reports about how bad France Road was.  This is the road that leads to the RV park.  You only have to go a mile but oh my goodness I dread having to go back out that way, but it is the only way out.  I found 5 mph was even too fast for this road.  It is just that bad.  The good news is they are currently in the process of redoing the whole road and it will be finished by this November.  Great for those who come after us but not going to do us any good.

Soon enough we saw the sign for the RV park.  I was never so happy to get off a road. 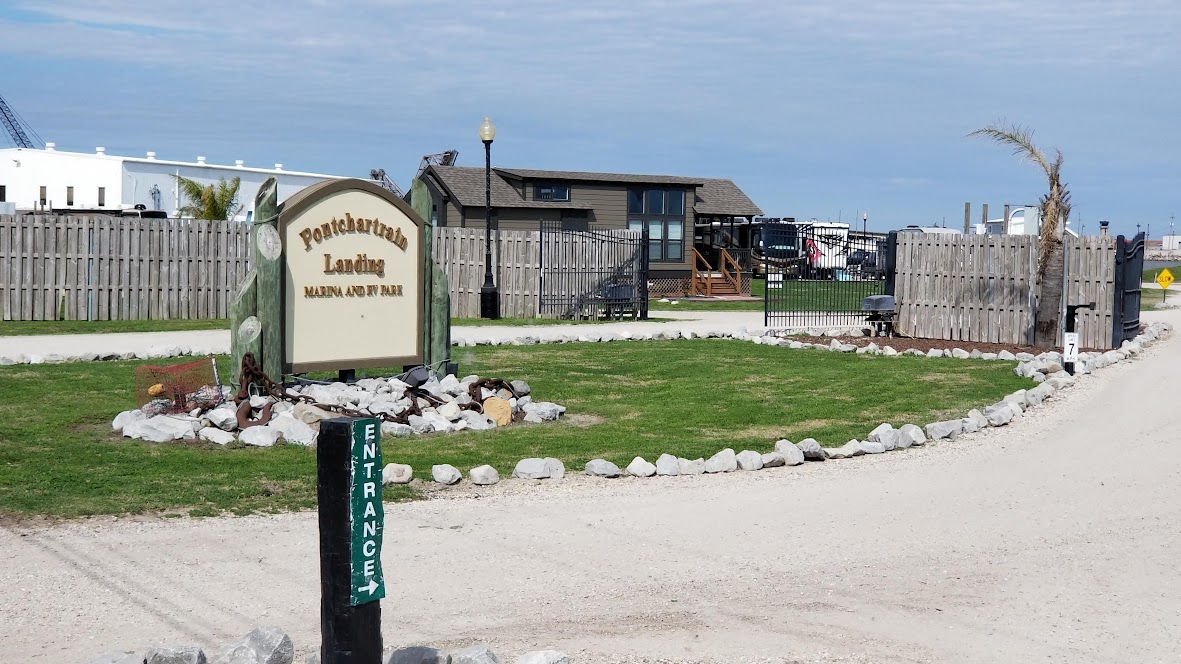 Here is our home for the next week.

Our site as is the whole park is gravel.  With the wind blowing even lightly it gets dusty real quick.  Our site is narrow, and just long enough for Graybeard and Little Graybeard.  It is spot on level, all utilities are convenient to the wet bay.  Site separation is minimal, nothing like the Escapees Park, but it is ok.  The park is spotless, no trash lying around, and lots of neat little colorful trees – like the one next to our rig – have been planted throughout the park.  Even better Gertrude has a clear view of the southern sky so, yes, we were able to watch Jeopardy tonight – James finally hit 2 million.  Overall, first impression this is a nice place to call home.

We’re now going through all kinds of things to see and do trying to decide which ones we’re going to try and get to.  There is the French Quarter, the WW II Museum, a River Boat cruise, and lots of jazz music.  Stay tuned and we’ll let you know.

Our day on The Road of Retirement has come to a close.  By and large we are settled in and comfortable.  There a few things left to do but according to the rules of retirement one should never do today what they can put off until tomorrow.

Thanks for coming along again, as always we enjoy your company.  See you tomorrow.