Home is Where We Park It:  Natchez State Park, Mississippi

Now How About That

It was, I believe, Thursday, maybe Friday when I received a phone call from the VA Center in Pensacola.  After three weeks someone finally got around to readying the Xray of my finger.  They told me it was still fractured and I should see an orthopedic specialist as soon as possible.  Now how about that.  I’ve had the splint off for weeks now and have been using the finger ever since.  Now you want me to seek out a doctor?  Really?  Don’t think it’s going to happen.  Hey, it will eventually heal.  Maybe a bit crooked but so what.

One more thing, there is all this talk about overcrowding in RV parks across the country.  We must be in the wrong part of the country.  Since St Augustine we haven’t encountered an over crowded park.  Don’t get me wrong, I’m not complaining.  I’m just wondering what is going on where.  This beautiful state park, for instance, is empty.  It has forty plus sites and I would say there are no more than four sites occupied, including ours.   I just hope the trend continues.

Time to do some more sight-seeing.  We’re going back into Natchez to take an Open Air Tour of the city.  It really is an open air tour because we’ll be riding around in a specially modified golf cart.

Yes, Barbara’s on board and ready to go.

This is Julia our driver and guide.  She, like us, is also from New Jersey.  Small world indeed.

Come on, hop on board and we’ll get going.  Our first stop is the Canal Street Station.

There are actually two terminals here, the one visible to the left above is where the passenger terminal was, the tracks where in the middle where the planter is now located and the cargo terminal was to the right.   This is the cargo terminal as seen from the street.  The large windows were once doors where wagons, trucks, whatever backed up to them, unloaded, and the goods were taken through the building to waiting trains.

This is the William Johnson house. William Johnson was a free man of color in Natchez. He acquired several building in Natchez, approximately 2,000 acres of land south of town and he owned several slaves. He gained the respect of leading citizens of the time, some of whom he loaned money to – including the governor of Mississippi who had signed his emancipation papers.  His house continued to be owned by the family until they sold it to the Ellicott Hill Preservation Society in 1976. The house was then donated to the city who in turn donated it to the National Park Service in 1990. After an extensive restoration process, the National Park Service opened the house as a museum detailing William Johnson’s life in 2005.  I’ll have a complete blog later about William Johnson.

This is the home of the mayor of Natchez during the Civil War.  When Union forces gathered on the river off of Natchez he decided to surrender rather than take a chance that they would sack the city.  Held by the Union for the duration of the war, the city escaped the damage and devastation seen by many other southern ports.  It is said that the Mayor died the next day of a broken heart, or was he poisoned?  No one really knows.

This is a one-and-a-half story Greek Revival townhouse built for Samuel and Jane Newman around 1840. They purchased the property for $1,000.  Over the years ownership changed several times. In 1884, the property was sold to Bettie Jacobs, and in 1900, Bettie Jacobs sold the property to the Natchez Elks Lodge for an undisclosed amount.  Not long after acquiring the property, the Natchez Lodge a local builder to enlarge the building. During the 1902-1903 renovation, the builder added a full second floor to the original half story. This explains why the windows differ on the second floor from those on the first. Since the 1902 renovation occurred during the Victorian Era, many architectural features were changed. Fireplace mantels and door moldings were “modernized” into the Victorian style and the front pediment and four massive columns added.

What happens when you want to join the Elks but they refuse to accept you as a member?  You build a bigger house next to their lodge!

This is the first jail built in Natchez.  The story is when a criminal was to be hanged, they did so with him in full view in the third floor window.  Town citizens would gather to observe and picnic.  The door on the gallows would open and the criminal would drop to the second story and be visible in the second story window.  Honestly, not my idea of where to go for a picnic but times were different back then.

This is the First Presbyterian Church, located at the corner of South Pearl and State Streets  It is one of the finest examples of a Federal-style church in Mississippi. Constructed in 1828-1829 on the site of an earlier church, it is home to a congregation organized early in the 19th century.

This is St Mary Basilica.  St. Mary Basilica is a minor basilica, once the cathedral for the state diocese.  In a minor basilica, all the liturgical roles for congregation members are to be promoted, liturgical music is to be prayerfully developed, and special feasts days and devotional practices are to be observed.  The oldest Catholic building still in use in Mississippi, the church received its first blessing in 1843. The church, a landmark in the city, is an exquisite example of Gothic Revival architecture. 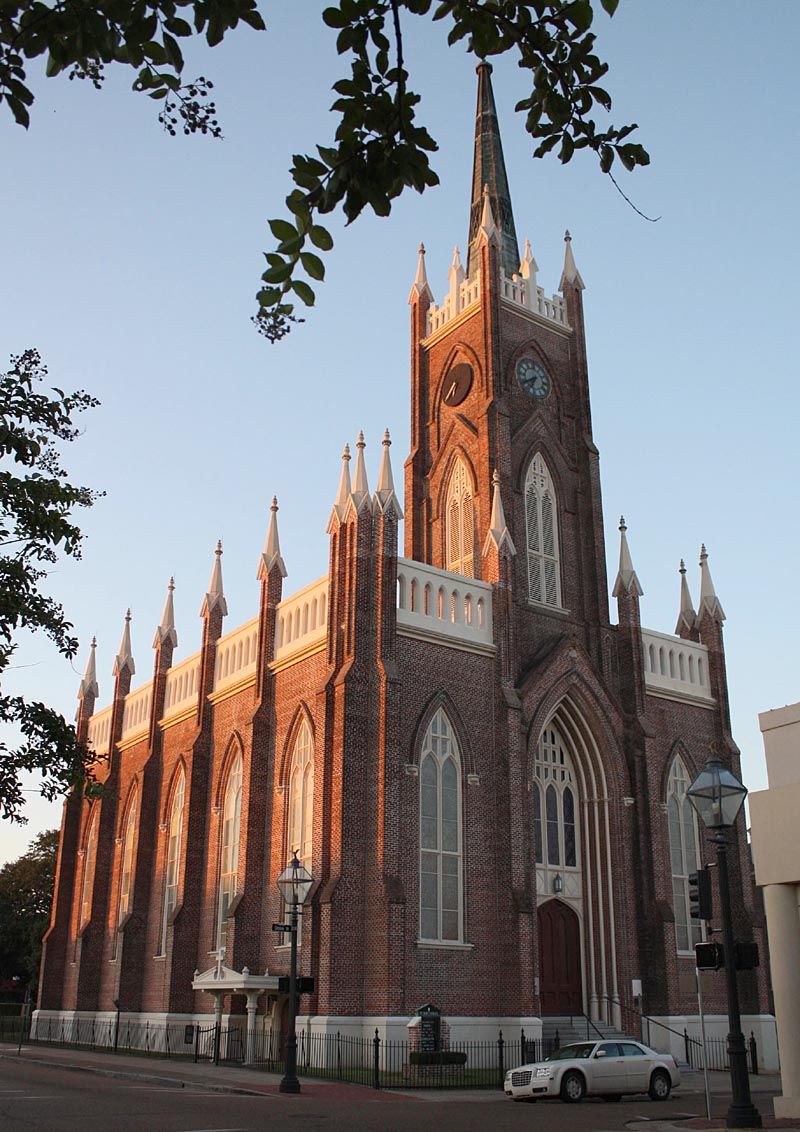 The next stop has to be the saddest place in one of the saddest times in our nations history.  I just stood with a heavy heart for a long time in silence here.  This is Forks of the Road.  At the Forks of the Road market, which by one historian’s account probably looked like “a sprawling prison camp,” salves would be haggled over and sold to cotton plantation owners who came from across the Deep South.  At its peak, as many as 500 slaves could be found at the market on any given day. It’s believed to have been the second-largest slave market in the South; the biggest was farther down the Mississippi in New Orleans.

Based in Alexandria, Virginia, Isaac Franklin and John Armfield were the largest traders of enslaved African Americans in the nation between 1828 and 1836. The men bought enslaved people at low prices in the Upper South and sold them at much higher prices in the Lower South. While Armfield remained in Alexandria to purchase bondsmen for shipment south, Franklin handled sales in New Orleans and Natchez.

This is the Stanton House.  In 1858, Frederick Stanton built the home of his dreams for his family on his new property – an entire city block of Natchez, Mississippi. The city block cost about $1,550. The house cost over $83,000 before it was even furnished. Carrera Marble, mahogany doors 2 1/2 inches thick, chandeliers from France, and Italian statuary appointed the interior. Huge Corinthian columns and granite steps adorned the facade.  Ironically, Stanton lived only one month after his dream home was finished.  Stanton Hall housed a college for young ladies for a short time, then fell into disarray to some extent before the Pilgrimage Garden Club renewed the antebellum mansion to much of its former glory. 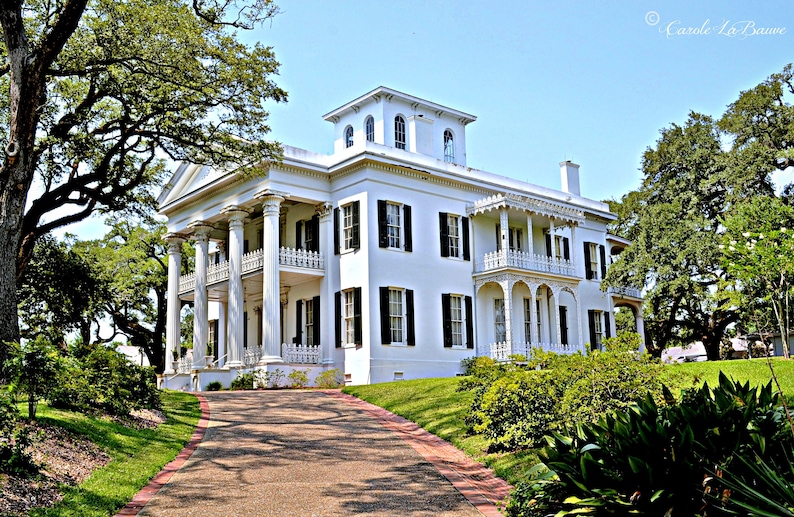 This is Natchez Memorial Park.  At it’s entrance is a monument of an unnamed Confederate solider facing north, keeping watch for the soon to come Union Forces.

Within the park proper is one of the largest wrought iron fountains in the south.

This is the home of Greg Iles who is the writer of many New York Times best-sellers since 1992.  This nationally-acclaimed Mississippi writer not only spends his time writing novels here at his house that are full of suspense from to cover to cover, but he is also a screenwriter and a talented musician.

A bright red door in Natchez – what do you think it means?  Not that.  It means your mortgage has been paid off.  Want to start a new trend in your neighborhood! 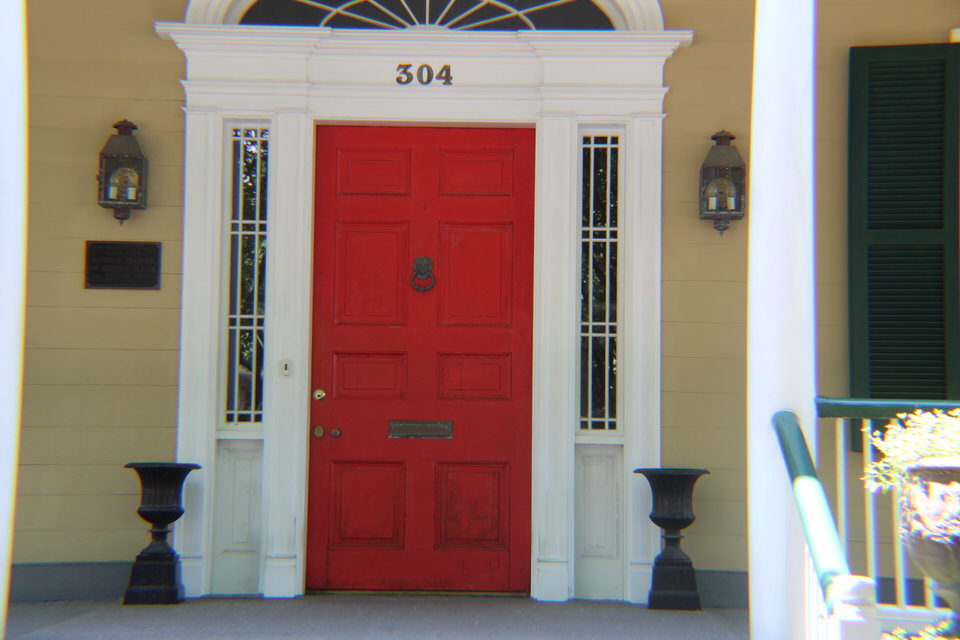 Even the man hole covers are unique.

Back at the Visitor Reception Center I discovered this display entitle Bowie’s Sandbar Fight.  James Bowie, lying on the ground is approached by Norris Wright who intends to finish him off by stabbing him with his cane sword.  Bowie instead pulls him down unto his knife killing him. 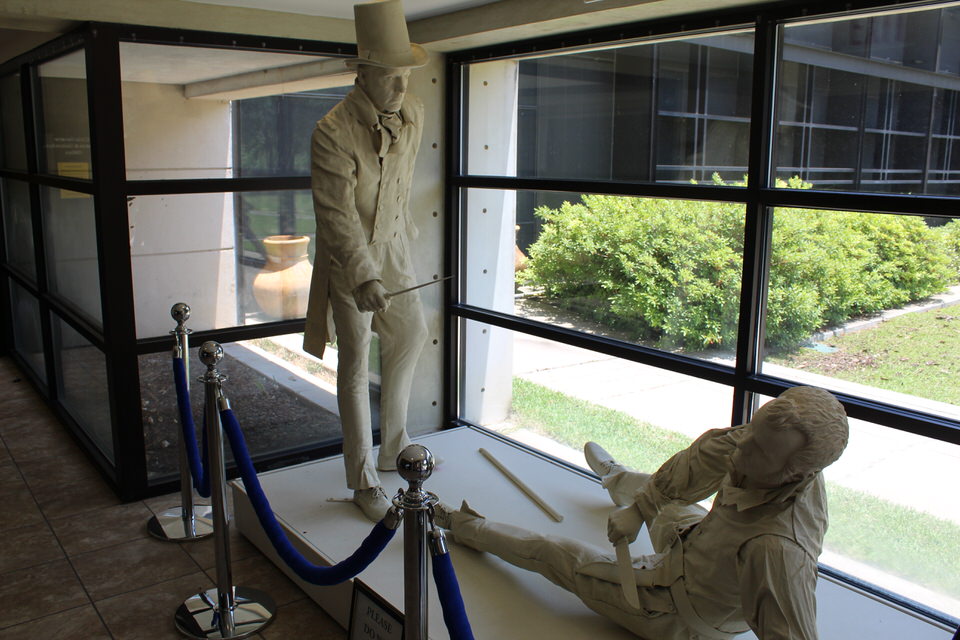 Barbara discovered this game.  It was about one’s journey to Natchez and back home again.  It was fun and informative at the same time.

That ends another day for us in Natchez.  We’ll take Monday off, go back in on Tuesday, and move out on Wednesday.

That brings to an end another day on The Road of Retirement.  We’ve learned a lot about this part of the country and a lot about Natchez.  Overall it’s been a good time and we’re not done yet.  So stayed tuned.  We’ll bring you more of our travels as the Internet allows – sometimes we can get connected and upload pictures, other times you can forget it.

Thanks again for sticking with us.  We enjoy your company.  Till tomorrow.