Home Is Where We Park It:  Timberlake Campground

Wind:  Gusting to 20 mph with rain and Thunderstorms

The First Time The Reviews Were Wrong

First things first, as the world celebrates this 75th anniversary of D-Day, I encourage all everywhere to pause for a moment of silence sometime during the day to give thanks and remember those who on that day fought and in some cases gave their all to ensure the freedoms we enjoy today.

I guess I should know by now, never trust the weather forecast.   The forecast for our travel day was rain starting at around 10:30 am.  OK, that would give me time in the morning to pack up and get us on the road.  Well, the rain actually started at 4:30 am and never let up until mid afternoon.  Then only briefly.  So be it.

We got on the road around 10:30 am in heavy rain.  The first stop was for fuel.  Now we had a decision to make, take the Trace or major highways?  Given the weather we chose the major highways.  A big mistake.  This route not only took us out of our way but the roads were terrible.  I probably lost a few fillings in my teeth and goodness knows what shook loose in Graybeard.  I’ll spend the next day checking things out and making repairs as needed.

We slogged our way north and did alright until the very end.  Following the GPS we ended up not at the campground but in a church parking lot.  That was a new one.  OK, let’s figure this out.  We pulled out our phones, brought up the campground on Google Maps, asked for directions, bingo, we were only a mile away.  Off we went again.  This time we made it there with no further antics.  There being our new home for a few days.

Arriving at the campground we pulled in to register and that went without a hitch.  Now on to our site.  I had chosen this campground and our site in particular because of many positive reviews I had read on the web.  All of them gave it high marks, especially the site I had chosen.  Well, like the weather forecast reviews too can be wrong.

Don’t get me wrong, the campground is neat, well groomed, and well taken care of.  What never was mentioned, though, in any of the reviews is the big flock of geese that rooms the place and of course you know what they leave behind.  You really have to watch where you walk.  We also have to keep the curtains drawn because Marti goes absolutely nuts whenever he sees them out the window.

On to our site.  I saw it from the distance and it looked absolutely fantastic.  A big, pull through concrete pad with more than enough length and width.  It was fantastic, until I got there.  It had a major down hill slope that left Graybeard way out of level.  It took two leveling blocks under each front wheel and the jacks to finally get us level enough to run the refrigerator properly.  Even still we’re not perfectly level but close enough.    The rest 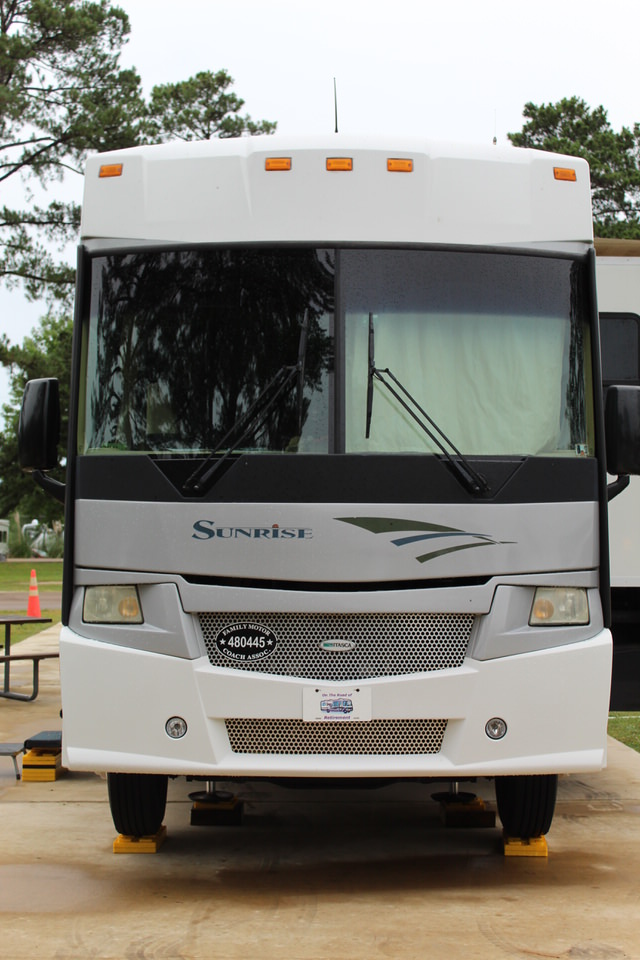 of the site is great.  Like I said concrete pad, all utilities are convenient to the wet bay, good water pressure, 50 amp.  Here’s a look at the section of the park we are in.  You can’t see it in the pictures but very few sites are level.  I mean it’s really weird, you go to all the trouble of putting in concrete pads but don’t ensure when you pour the concrete that they are level.  Oh well such is life.  It’s OK for the next few days 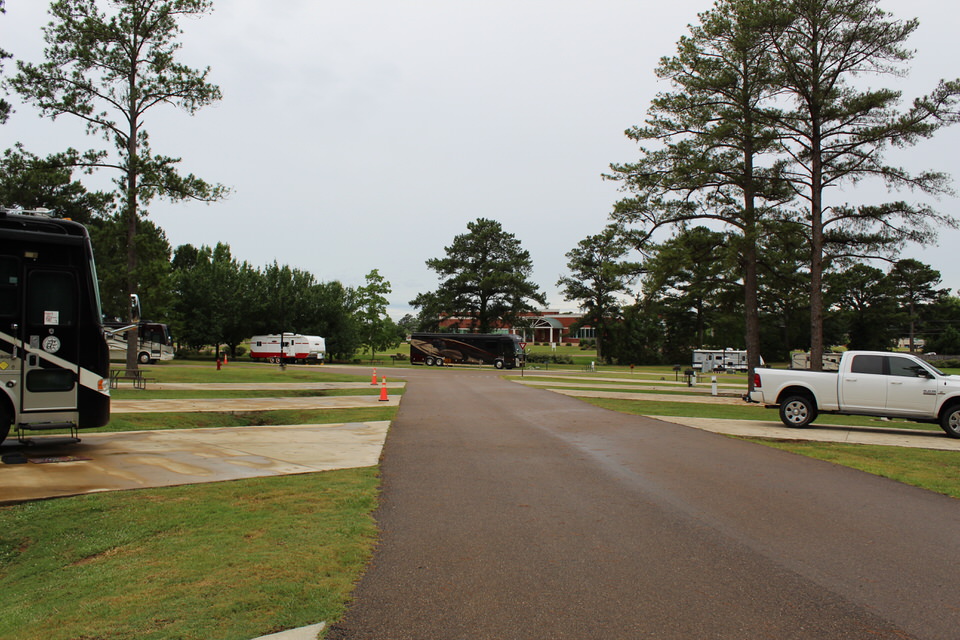 Well, I got us all set up, everything hooked up and then decided since rain was on the way I’d put out the main patio awning.  This makes it easier when Marti has to go out.  That finished I came inside to relax for a minute or two.  But that’s when the sky began to get really dark, I mean like night time dark.  Suddenly the wind began to pick up.  Woe, I decided the patio awning had better come in like right now.  I’m so glad I did.  A storm came through, the rig across from us had left their patio awning out and before you knew it, it was on the roof of their rig.  Dodged a bullet this time.

It’s now Thursday and as I type this it looks like we are in for a repeat of yesterday’s storm.  Wind is picking up, sky is growing dark, rain is beginning to fall.  Here we go again.  This pattern according to the weather forecast is supposed to continue for another two to three days.  I hope they’re wrong again with their forecast.

Today we’re going to run to Camping World for some needed supplies, we’ll go drive the part of the Trace we missed coming up, we’ll do some shopping, and we’ll probably get caught up on the laundry.

That’s it for now on The Road of Retirement.  Rain, rain go away come again another day, a day real far off in the future.  Till later, have a good day wherever you might be. Thanks again for traveling with us.  We’ll catch you later.