My goodness I didn’t realize it’s been so long since I last did a blog.  Time to get caught up.

Last Friday while we were still at Shawnee State Park our daughter Amanda came to visit us.  She came with the equivalent of a steamer trunk and enough odds and ends to fill up half of the couch.  This was just for two days!

Of course the long journey was exhausting so she managed to clean off the couch and take a nap.

We always love her visits and this time was no different.  She is one of the reasons we also haven’t replaced the couch with two theater chairs.  One never knows when she is going to pop in for a visit.

While she was here she decided that Marti was long over due for a grooming.  She took him outside, put him on the picnic table and went to work.

Speaking about our Marti he has gone to his retirement home.  When Amanda left she took him home with her.  He was getting worse and worse about traveling.  Any time I started the engine or moved a slide he would freak out and begin shaking and barking and carrying on.  It had been getting progressively worse over the last several months.  So we made the difficult decision to end his traveling days.  We know Amanda will shower him with love.  The only question is Will he adjust?  Amanda says he has been sitting by the front window and just howls.  We know he is looking for us and it breaks our hearts but we believe we made the right decision.

While Amanda was with us, Saturday we went to the Flight 93 National Memorial.  The Memorial Site starts with a turn-off from a busy highway onto an approach road that passes reforestation projects to reclaim land that was once a strip mine.  The healing of the scarred mining landscape is meant to prepare visitors for the emotional healing of the Memorial Site itself.

As you enter the Memorial site the first thing you come to is The Tower of Voices.  The Tower is 95 feet high and when completed it will have 40 wind chimes representing the 40 who were on-board flight 93.  The tower is set apart from the actual visitor’s center and is meant to serve as a welcoming beacon to all who enter the memorial site.

It is illuminated at night.

Currently only 8 chimes have been installed and as of now they hang silently.  The 8 were hung for the dedication of the tower so that family and friends could see what they would look like.  The chimes each have an internal striker that is activated by a sail panel that hangs below the chime.  When the wind moves the sail panel the striker comes in contact with the chime.  Until further testing and the remainder of the chimes are installed the current 8 will remain silent.

Looking down the hill from the Tower.

Leaving here we next made our way toward the Visitor’s Center.  But before you actually arrive there you find yourself on a black granite walkway that lays out the final flight path of Flight 93.  This is looking back at the direction from which Flight 93 came.

Along the walkway are time lines of when the other planes struck their targets.

The walk way terminates in an overlook from which you can see off in the distance the Wall of Names and a Sandstone Boulder that marks the approximate location where Flight 93 impacted the ground.

Moving down to Memorial Plaza you discover that the depiction of the flight path continues and is represented by a black granite walkway that aligns with the flight path walkway at the Visitor’s Center above.  Along the walkway, 40 marble panels are aligned in a row each with a name of one of the 40 passengers on Flight 93.

This is a closer look at the sandstone boulder which sits behind a locked Ceremonial Gate which is made of eight hemlock beams and steel framing.  The gate is opened each year on September 11th to allow family and friends of the 40 passengers to walk through the final resting place of their loved ones. 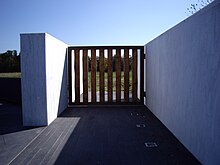 To the left of the Sandstone Boulder is the actual debris field and the final resting place of all 40 of the passengers on Flight 93.  A four foot high sloped black wall separates the walkway from the field which surrounds the crash site.

The wall contains a space for visitors to leave their tributes.

Back at the Visitor’s Center are many displays and exhibits.

A reminder of the type of day it was

For many it was

All of this changed as America comes under attack.

There was a number of displays regarding Flight 93.  The type of plane and the seating.

There was an exhibit that allowed you to listen to actual calls made from those onboard to loved ones.  Listening to the conversations was heartbreaking and extremely difficult to do.

A time line of events

The passengers decide to fight back.

The resulting crater was 15 wide and 30 feet deep.

There was a display dedicated to the passengers and crew of Flight 93.

The investigation to determine those responsible.

Identification of the remains until everyone is identified.

Almost immediately residents of the surrounding area constructed a memorial of their own,.

The care takers of this memorial banded together in a group called the Ambassadors.  Day after day there was always someone at the fence even during the worse days of winter weather.

On September 24, 2002 the bill was signed by then President George W Bush to create a permanent memorial to Flight 93. 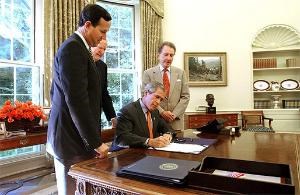 In closing let me say, if you’ve never been to the Memorial put it on your bucket list of must see places.  We’re grateful that we had the opportunity to visit this memorial site.

That was Saturday.  Sunday was travel day.  We left Shawnee State park for Ives Run COE in Tioga.  It felt so strange to be just the two of us traveling.  It’s going to take some adjustment before we’re used to not having Marti with us that’s for sure.

It was a beautiful day, traffic was light and within 4 hours we were there.  Oh but the mountains we had to climb.  More and more I’m impressed with the performance of Ford’s V10.  It may not be the first or the fastest over the mountains but it gets the job done.  We are here to visit with family and friends and so will be here for the next two weeks.

That brings us up to date on The Road of Retirement.  We had a wonderful visit with our daughter Amanda.  We crossed another site off our bucket list.  We moved again and have another wonderful new home.  Thank you again Lord for the wonders of this world you created and for granting us safe passage once again.

Thanks for joining us on our journey, catch you again tomorrow.

These are the voyages of  Graybeard and it’s occupants.  Our continuing mission: to explore as many new states as possible, to seek out new acquaintances and make new friends, to boldly go where we have not been before