Home Is Where We Park It:  Pin Oak Creek Campground, Union, Missouri

Just another great day.  We awoke this morning to clear blue skies and comfortable temperatures.  There was no need to rush to get up since nothing was on the docket for today.

Later during the morning as we were taking a walk around the park Mike who is a resident workcamper stopped to invite us to the Customer Appreciation Barbecue later that day.  He explained that the owner Chris does this every year at least once for all campers.  The only requirement, bring a side dish.  Everything else including the main course – which this time would be barbecued brisket – would be provided.

Barbra got busy when we got back and made corn bread and a lemon cake to take as our contribution.  In due time we were off for the barbecue.

When we entered the hall the first thing that caught my eye was the ceiling.  They give kids the opportunity to paint a ceiling title.  Here are some of them.

Come time for the food to be brought out the hall was full.

What a spread it was.  Food aplenty for all!

I had more than enough to satisfy my hunger.

There was also a table full of desserts but I forgot to take a picture of that.  Suffice to say it was loaded and I made a visit or two to it.

While at the barbecue we were fortunate enough to sit next to Jim and Glenda.  We had a wonderful time talking to them and sharing stores of RV experiences.  Like us they are only here for a few days and then will be returning to their home in south Texas.  They shared with us another volunteer Christian organization that assists churches who have building or remolding needs.  When we returned home we Googled it, then signed up for further information,.  Will we get involved?  Time will tell.

Time now to go back to the Studebaker National Museum.

In 1915 Robert Erskine became the president of Studebaker.  Under his leadership Studebaker experienced record sales but also experienced near collapse.

In 1920 the horse drawn business was sold.  Out of 5,000 wagon makers in the U.S only Studebaker successfully made the transition from building horse drawn equipment to manufacturing automobiles.

Then came the Great Depression of 1928 which hit Studebaker especially hard.

In 1935 Studebaker came out of Receivership and a dinner was held to celebrate.

Those chosen to lead the emerging company were

At first sales were lackluster.  For example,

Shortly after things would change.  In a bold move that payed big dividends Robert Lowery was hired in 1936 to head Studebaker’s design studios.

The little engine that could.

This is another first from the Lowery team.

Then came WW II and all production of automobiles ceased.

This was the last car Studebaker built before it retooled for the war effort.  No new automobiles were built after January 31, 1942.

Second, the B-17 Bomber Engine 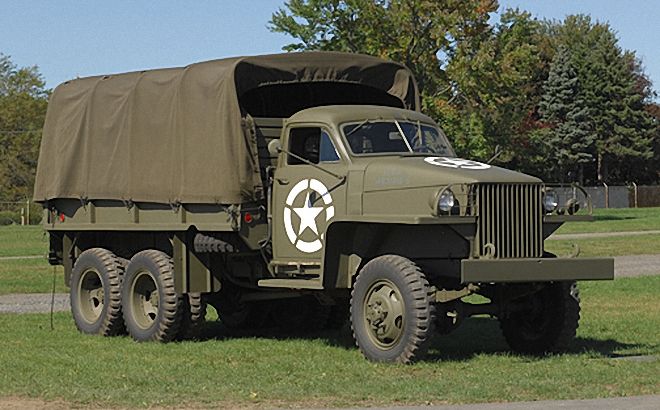 After the war ended it was a seller’s market.  Studebaker introduced all new styling in 1947 and entered its most profitable era ever.

This 1947 Studebaker Woody Wagon is the only one known to exist today.

This Studebaker was offered in a wide variety of models from the standard pickup to a heavy duty 2 ton unit.  This was Studebaker’s best selling truck series.

From trucks back to cars.  This car was made in the peak year of production for Studebaker.  This car featured a new for 1950 automatic transmission.

The Bullet Nose look was the work of the Lowery design team.  I will admit I was always partial to this look and wished that someday I could own one of these.  Alas, it was never meant to be.

Unfortunately, early on in the 50’s Studebaker was in serious trouble as a company.

In 1957 hoping to revive sales the all new Hawk was introduced.  But sales still continued to decline.

There was a glimmer of hope in 1959 when the new Lark was introduced.  It proved to be a rousing success.  This was the first year that Studebaker recorded a profit since 1953.

Yet the success was only short lived.  Struggling to survive Studebaker offered the all new Avanti in 1961.  Though demand was strong it suffered production delays and could not fulfill its promise.

Here is one very special Avanti.

That cooler is not for cold drinks, it is actually a part of the intercooler system for the engine’s supercharger!

This is the last car to come out of South Bend.

After production ceased in South Bend Studebaker consolidated all production in their Hamilton, Ontario plant.

Unfortunately, Studebaker was not to be.  On March 17, 1966 Studebaker of Canada closed it’s doors.

This was the last Studebaker to roll off the Canada assembly line.

Today, though Studebakers are no longer produced their legacy lives on.  The Studebaker spirit is alive and well in The Studebaker Drivers Club, The Antique Studebaker Club and the Avanti Owners International Association.

And its presence in South Bend remains strong.  Clement Studebaker’s house is now a restaurant, a golf club and a school.  The proving grounds are now a county park and the pine trees that spelled out Studebaker are a popular picnic destination.

Quickly now, one more stop.  Jump on the elevator with me and lets go down to the Visible Storage System.  This is a collection of odds and ends of all kinds.

Down here we found the Studebaker that Barbara’s family once owned.

Next we have.  Note how the actual driver watched the road from the trunk – with a video monitor in the nose.

Then this car that shows that the engineers at Studebaker were always thinking of new possible new cars.

There was lots more down here, come see for yourself one day.

Our tour of the Studebaker National Museum is finished.  But pictures really do not do justice to these fantastic automobiles.  Put it on your bucket list and someday come view them for yourself.  You will not be disappointed.

Our day on The Road of Retirement has come to an end.  It’s been another wonderful day in every way.  We’ve traveled it together, hand in hand, singing our song.  We met two wonderful people who hopefully we’ll keep in touch with from this point on.  We had one whale of a meal courtesy of the campground’s owner, Chris.  Chris, by the way, has been the owner of the campground for the last 17 years.  It has been in his family even longer than that.  The pride he has in it is evident everywhere.

One thought on “TOUR AMERICA 2019: UNION, MISSOURI -THE SHOW-ME STATE”