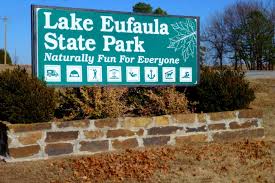 It all began last night in the parking lot of the museum.  As we were getting ready to go to bed I decided to flip the frig to propane.  I then walked away and came back to our game of Mexican Train.  A bit later Barbara opened the door and said Any idea why the light is not on?  Checking, I noticed the error code No Flame.  Interesting.  The generator was still running so I flipped it back to electric.  No problem.  Then I flipped it back to propane.  Same thing.  No matter how many times I tried I could not get it to work on propane.  The only solution was to let the generator run so that the frig could run on electric.  Ok, something to figure out and solve when we get to our new home tomorrow.

The rest of the night wasn’t so bad.  Between the charter planes taking off to our right and the occasional train to our left and the generator running under our bedroom I’m surprised we got any sleep.  But sleep I did.  One of the best nights ever.  You figure that one out.

We were both up early this morning and ready to roll.  By 9 am we were on the road and rolling south and then west.  We only had a couple of hours to drive and for the most part the roads were not bad.  Up hill and down as usual but not as bad as a couple of weeks ago.  One stop for gas, wow, running the generator for 12 hours really messes with your gas mileage!

Soon enough we were at our new home – or so we thought.

Before backing in I walked our site.  Checked the utilities and discovered that we only had 30 amp.  What!  Several months ago when I booked the site I paid in full for 50 amp.  Normally this would not be an issue.  However, I still couldn’t get the frig to work on propane.  Between the frig on electric and the AC we max out at around 27 to 29 amps.  No good.  We need 50 amp.

We locked up and went to the office to get the site we had paid for.  That’s when the rest of the fun began.  Sorry, holiday weekend we don’t have an empty 50 amp site.  Like I don’t care I want what I paid for months ago.  I even asked if I could run the generator for a bit to cool the rig down.  No.   Mind you there is as of now no one around us.  The ranger simply refused to work with us.  His attitude was take it or leave it.    We did find out later that he tried to switch our box to 50 amp but couldn’t.  Sorry, a day late and a dollar short.  Tomorrow we leave for a private park, a pull through with FHU and 50 amp.   Bonus, they are giving us a discount that makes it cost less than this state park.   I really would have liked to stay put, this park is beautiful.  But it is what it is.

So, I decided since I didn’t have to hook anything up I would try to fix the frig.  Took the burner box off and made sure there was nothing obstructing the burner; made sure the igniter was clean, then flipped from electric to propane.  It’s been running fine now for over 5 hours.  I guess Harvey our friendly ghost is back and determined to have some fun at my expense.

That my friends was our day on The Road of Retirement.  What’s that saying into every life a little rain must fall.  Guess it was our turn to get rained on.  Really not all that bad, though, when you consider the bucket full of positive days and experiences we have had so far this year.  I need to try and keep that in perspective.  Now that I’m cool and calm maybe I can, I know I can.

Thanks for coming along with us again today.  We always appreciate your company and comments.  Catch you tomorrow.

One thought on “TOUR AMERICA 2019: CHECOTAH, OKLAHOMA – THE SOONER STATE”