What a difference a day makes.  Today was overcast and cool.  A perfect day to go sight-seeing since there would be no sun beating down on us.  We had a quick breakfast of pancakes, juice and coffee, and then we were off.

This was our destination for the day.

as well as, The Columbus Museum.

We knew little about Columbus, even less about Pancho Villa’s raid on this small New Mexico town on the US-Mexican border.  That is why we went.  We wanted to discover and learn.

In 1891 the Village of Columbus was established near the Mexican border.  It was originally supposed to be called Columbia but the request was denied because of the numerous amount of requests for that name due to the Columbia Exposition.  However, Mr. Bailey who had originally applied for the post office of that name reapplied under the name of Columbus, after his home town of Columbus, Ohio.  That name was accepted at the Post Office Dept and on June 18, 1891 the new post office was opened and Columbus, New Mexico was established.

In 1902 the railroad came to town.  Due to the homestead act many came by railroad to Columbus eager to set up new homes.  Those who settled here used the railroad as it was their vital form of transportation.

By early 1916, Columbus was a flourishing frontier town.  There was a 12 grade school, three hotels, one bank, two general stores, one grocery store, two drugstores, one hardware, two churches, a lumber yard, a blacksmith shop, restaurants, a Ford automobile dealership, a newspaper, and a Coca-Cola bottling plant.

By 1912 the army established camps  along the border because of the unrest in Mexico.  Their Army Camp at Columbus was just south of the depot and was later renamed Camp Furlong.  With the establishment of the camp railroad traffic increased to ten trains a day. 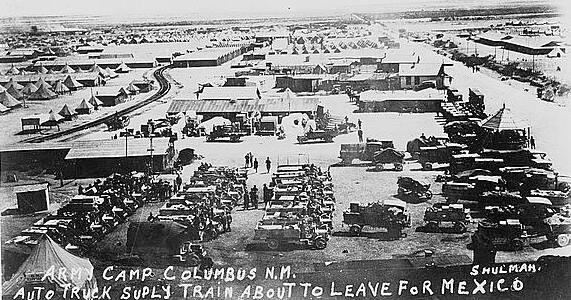 The peaceful life of this small frontier town was changed forever on March 9, 1916.  On that date at 4:12 am , Pancho Villa’s six hundred bandits raided Columbus and the Army”s Camp at Columbus.

They came from several directions and the fight centered around the business district, the army camp, and the stables.

The Army and the townspeople were caught by surprise.  One of the first to sound the alarm was

During the raid some were able to flee.

Practically every business was broken into and looted.

One of their major targets was the Ravel Brothers general store.  Though it could never be proved, they believed that they had cheated them in an arms deal.  The store was looted but not burned and the Ravel Brothers escaped unharmed.

By 7:30 am it was over.  The raiders had retreated back over the border with American troops in pursuit.

But the damage had been done.

And lives had been lost.

The American response was swift.

Today there is still much debate as to why?

There were others who thought that there was much more to the raid.

That concludes our day of learning and discovery.  We were thrilled to have this opportunity to again immerse ourselves in yet another piece of American history.  We hope you enjoyed learning along with us.

That was our day on The Road of Retirement.  It was a perfect day from sunrise to sunset.  Once again we got to do it our way, hand in hand, traveling along, singing our song.

Thanks again for coming along with us.  We always enjoy your company and your comments.  Catch your tomorrow.