To The Top Of A Mountain

Friday morning and we weren’t moving.  Absolutely not.  We tried.  Honestly.  But we were just too tired to move a muscle.  So we decided to take the day off and postpone sightseeing to the following day.

Now that Friday is out of the way, let’s jump to Saturday.  We were feeling human again and decided it was time to do some more sightseeing.  We’ll cover one of our ventures today and the other two in the following days.

First, there was the matter of breakfast.  We both agreed it had to be

This visit we met with success, they had a full tray of Everything Bagels.  Yippee!  Yet it was close, we ordered ours, no more than 10 minutes later the tray was empty.

Tummies taken care of we were off to do some sightseeing.  One of the trips we had in mind was to go to the top of A mountain.

Remember this one?   The big A originated in 1914.  The A is 70 feet wide, 160 feet long and about 5 feet thick from its base.  It was created by the students at The University of Arizona.  The work began in 1914. It took almost two years to complete.  First the site was cleared of cactus and shrubs; next the students dug trenches by hand for the foundation.  The letter was built using black basalt rock quarried from the hillside. The rocks were cemented together using mortar and water that was hauled by six-horse teams.  Over the years it has been painted many different colors:  green; red, white and blue, and today white.

This peak was originally called Sentinel Peak because in early Tucson a sentinel station was erected and someone stationed there to give warning whenever enemies approached. It was used as a sentry station in the Civil War.

So today we were going to the top of Sentinel Peak.  Yes, the warning is correct.  It is an interesting drive to the top to say the least. 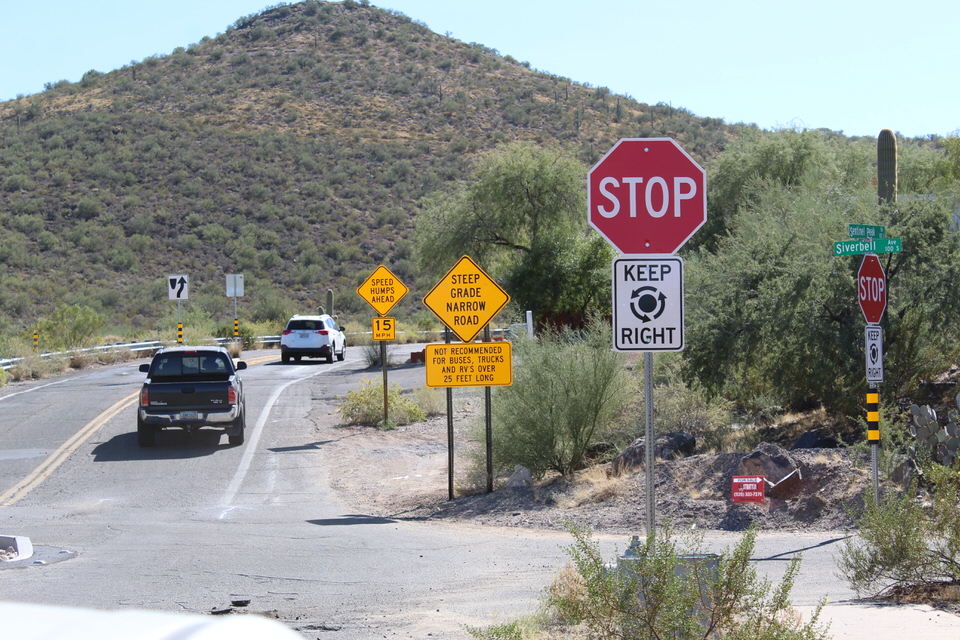 For a brief moment we thought we were back in Saguaro National Park.  The mountain was covered with Saguaro Cacti.

The entrance to Sentinel Peak Park. 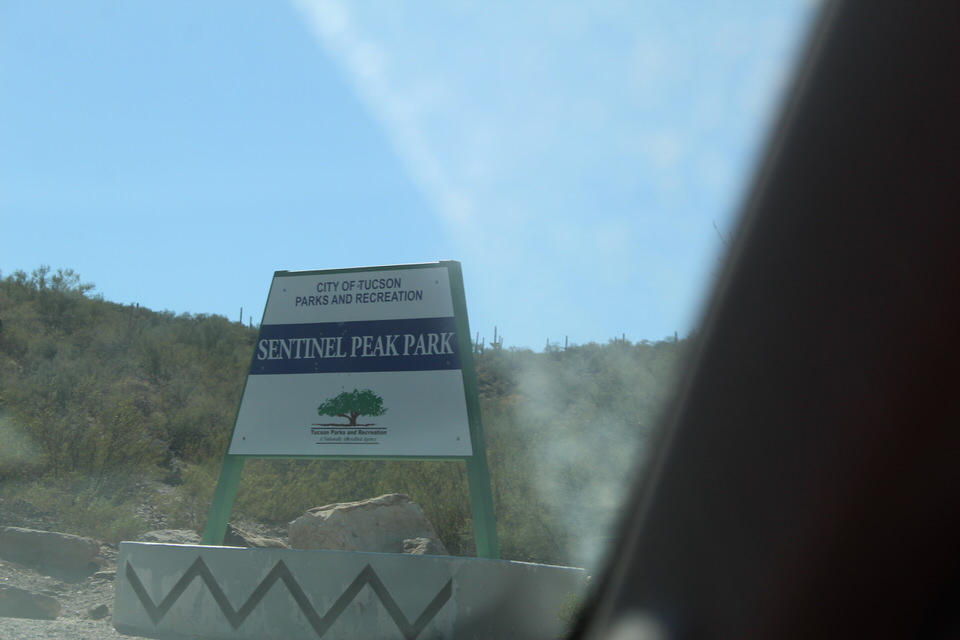 Up at the top 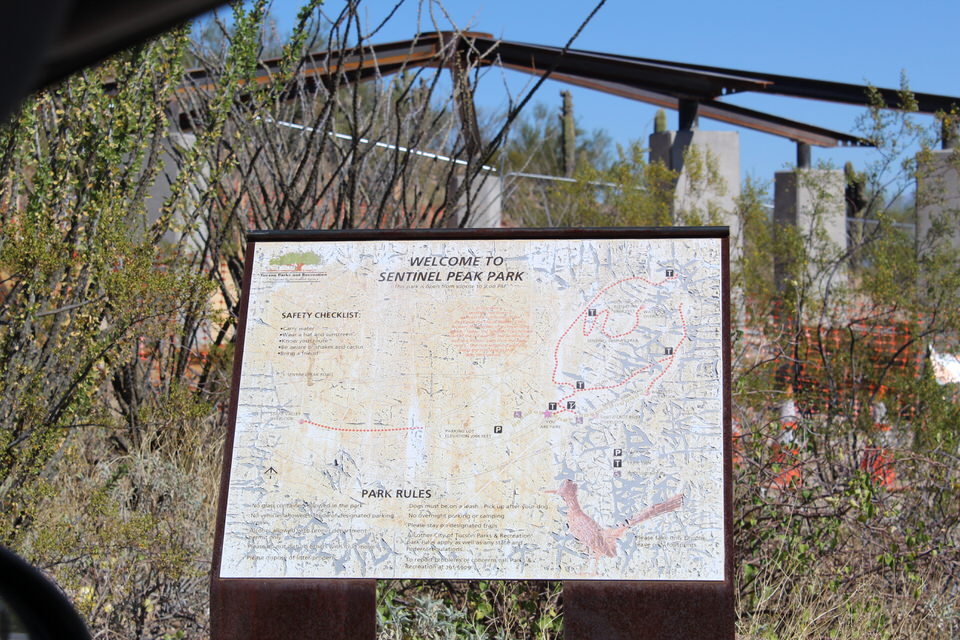 the city of Tucson spread out at your feet. 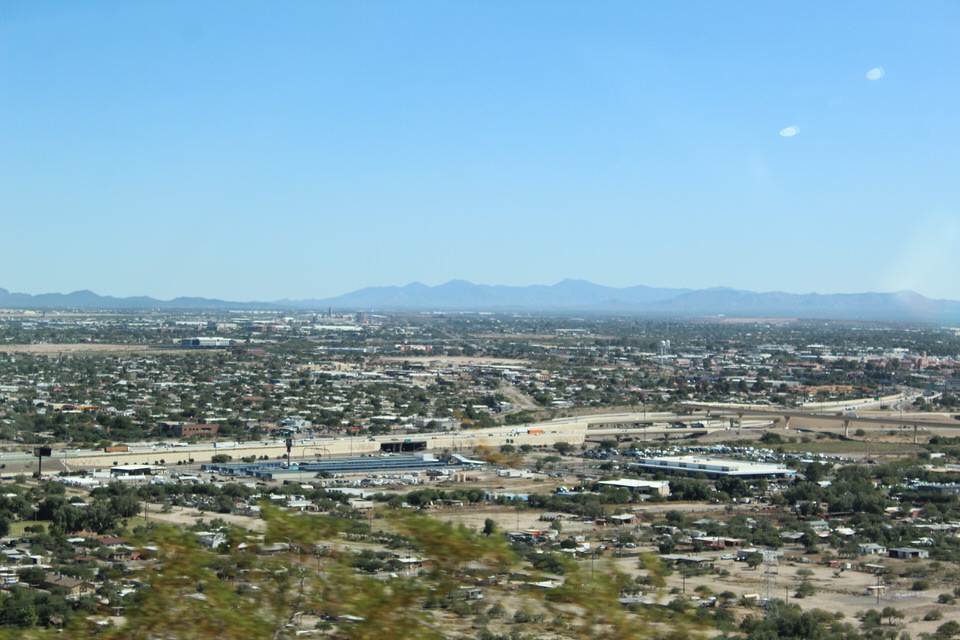 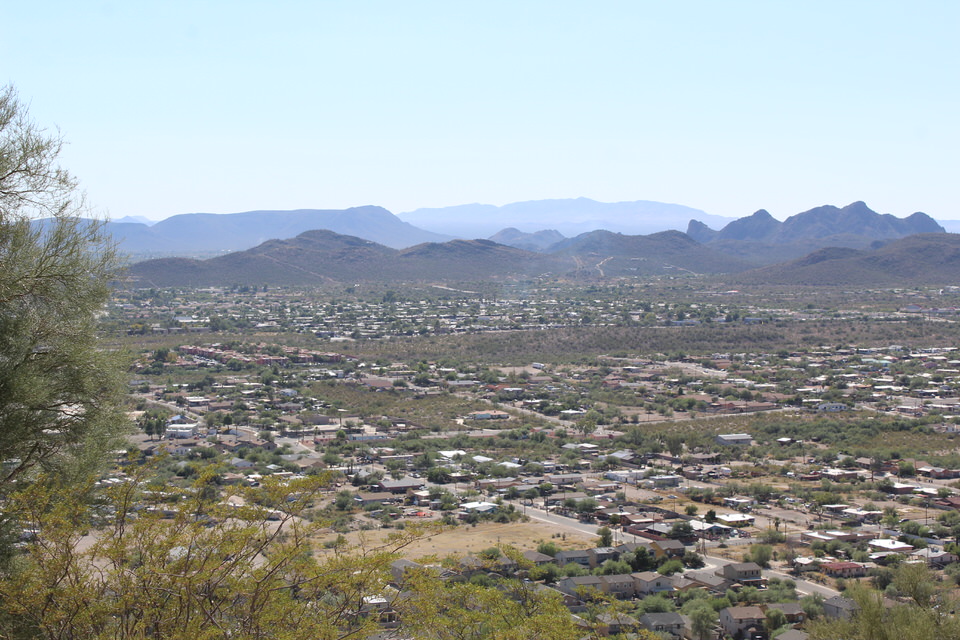 The one thing we missed though believe it or not was the giant A on the mountain.  Only after we were back down did we realize were we went wrong.  OK, it’s only 15 minutes from the rig so another trip is definitely in order before we leave.

We also went to two museums today – the Franklin Auto Museum and the Southern Arizona Transportation Museum – we’ll share them with you in the coming days.

Once back home Barbara went off to the Wishy Washy.  We have clean clothes again.

We ended the night with a team pizza party and movie night.  I don’t know where they purchased the pizza but it was really good.  Not true thin crust NY pizza but really good pizza none-the-less.  A big thank you to our team leaders who hosted the party.

We would also ask for continued prayers for my mom, and my sister and her husband as they continue to care for her.  Mom is still in the hospital and things, unfortunately, still look really bad.  Not all the tests are back but the ones that are paint a rather bleak picture.

That was our day on The Road of Retirement.  We have church tomorrow and a team activity in the afternoon so it’s time for some sleep.  It’s been a wonderful day, another day of discovery and learning new things.  Our kind of day.

Thanks for checking in with us.  We always appreciate your company and your comments.  Catch you tomorrow.