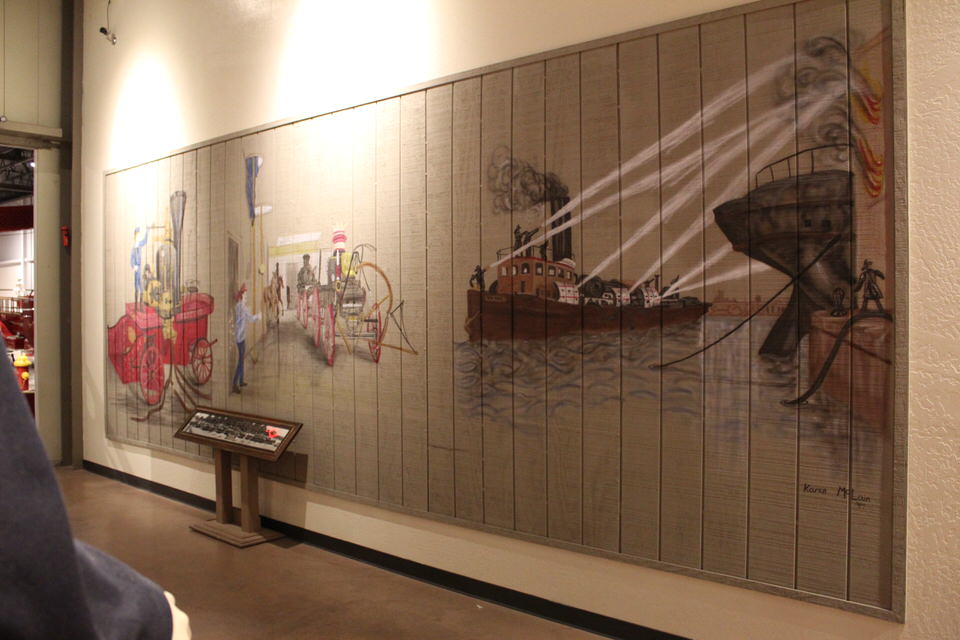 We’ve been here since Friday and we’re slowly settling into a routine.  We’re checking out places to visit.   We’re attending to monthly maintenance issues.  Setting up medical appointments.  In essence, the stuff of everyday life.

This being Sunday we started the day by listening to a message from our Pastor at our home church in Florida.  It, as always, provided a lot of good food for thought for the coming week.  After that it was time to settle back in the recliner and prepare for a day of football.

OK, I don’t know how far we will get with this blog since our internet is so poor.  I have to stop every three or four words to let the page catch up with my typing.

New day and the temperature is still in the 40’s but the big difference today is there is no sun due to total cloud cover.  It will be a day in which we’ll have to run the heat pump most of the day.  Our electrical bill at the end of our four week stay should be interesting.

Time to step back a couple of weeks to a fascinating place we visited in Phoenix.

This is a little known but absolutely interesting museum that we discovered and visited.

Barbara at the front counter purchasing our tickets.

What prompted him to found the museum.  The main takeaway for me was . . .in 1961 he established the National Historical Foundation to promote fire safety and to preserve the objects that tell the story of firefighting through the Hall of Flame’s programs and exhibits. 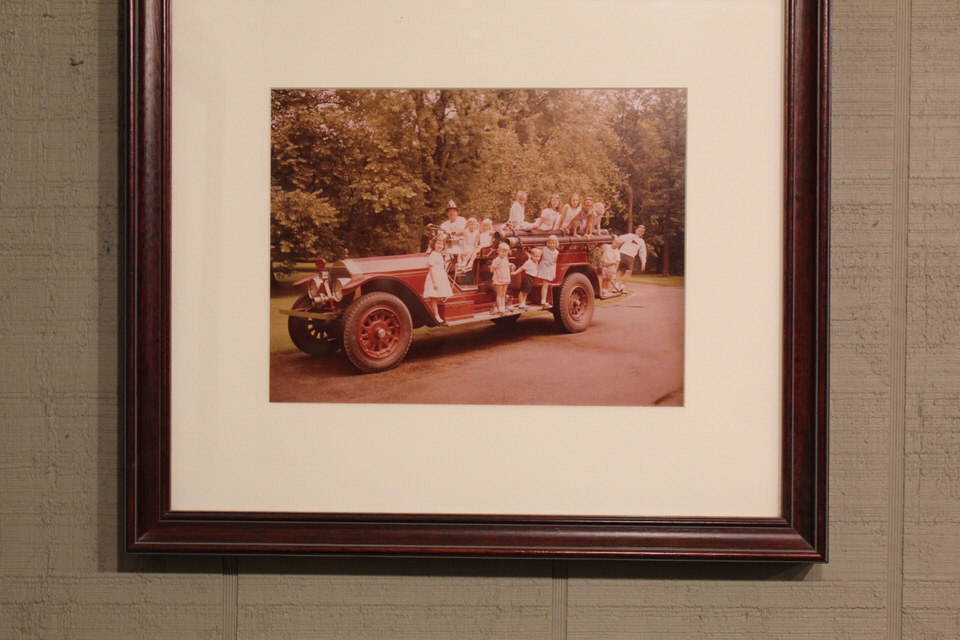 Following are some overview pictures of the museum’s exhibits. 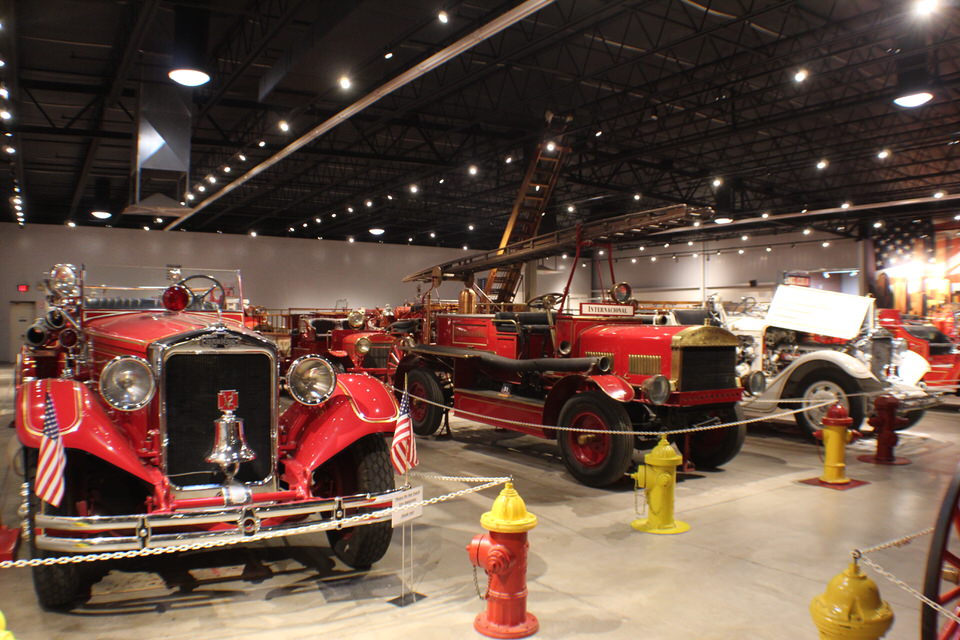 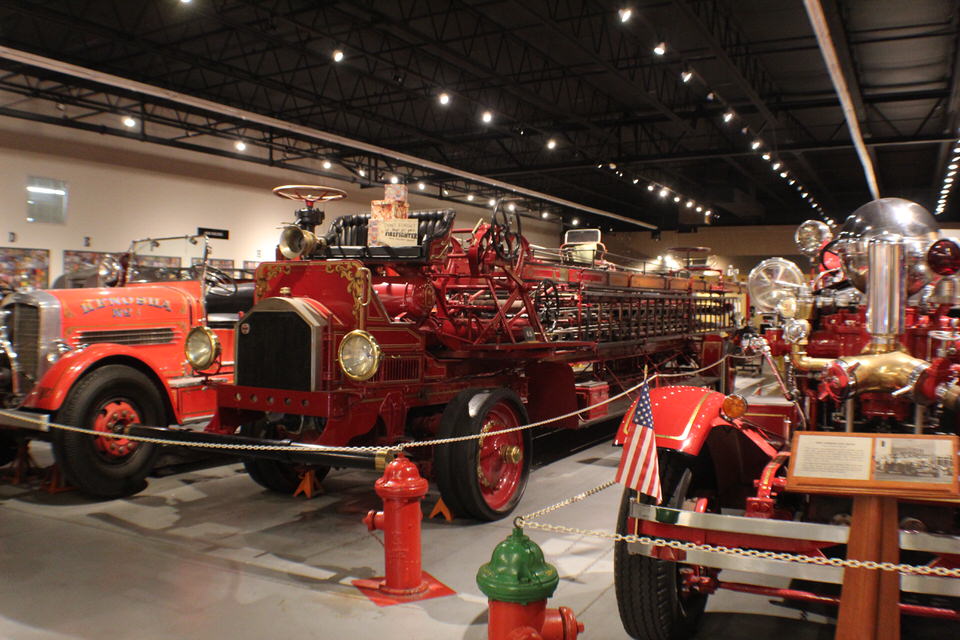 Time now for a closer look at some of the exhibits.

A unique chess set to say the least.  Take a closer look, the boys in blue have their pistols pointed at their counterparts who in turn have their hoses pointed back at them. 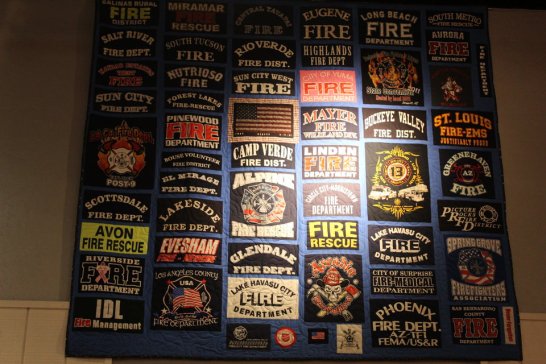 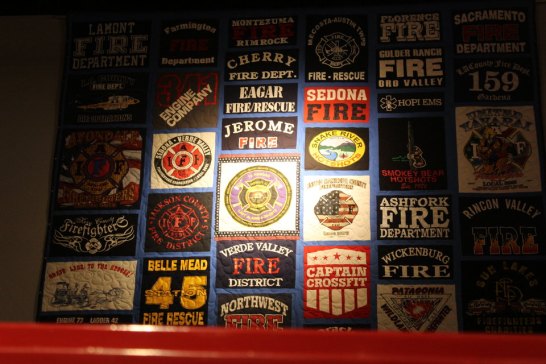 The Hall of Flame’s collection of graphic materials includes lithographs, prints, engravings, paintings, and photographs of a wide variety of subject material. 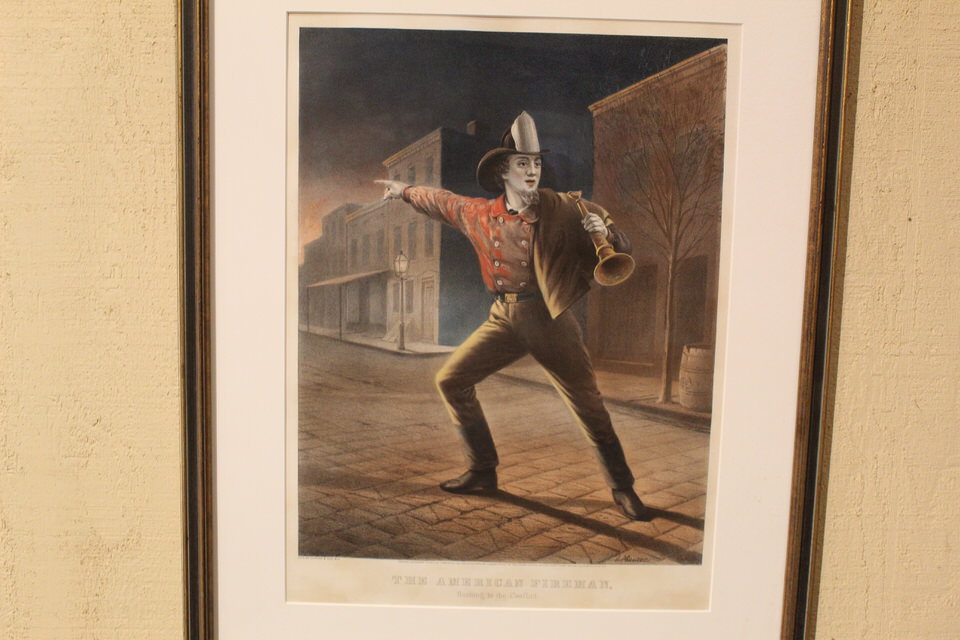 Nathan Currier, a long time member of the New York Volunteer Fire Department.  He wears a red shirt and a leather helmet which were the two constant uniform items of the 19th century volunteer. 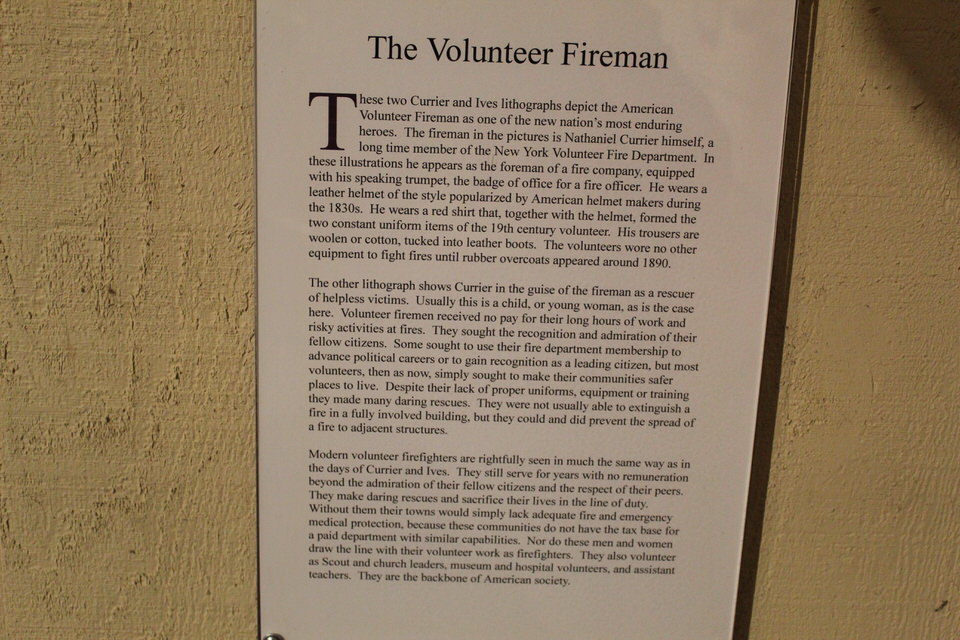 Nathan Currier this time in the role of a rescuer of helpless victims.  Usually this is a young child, or as in this case a helpless woman. 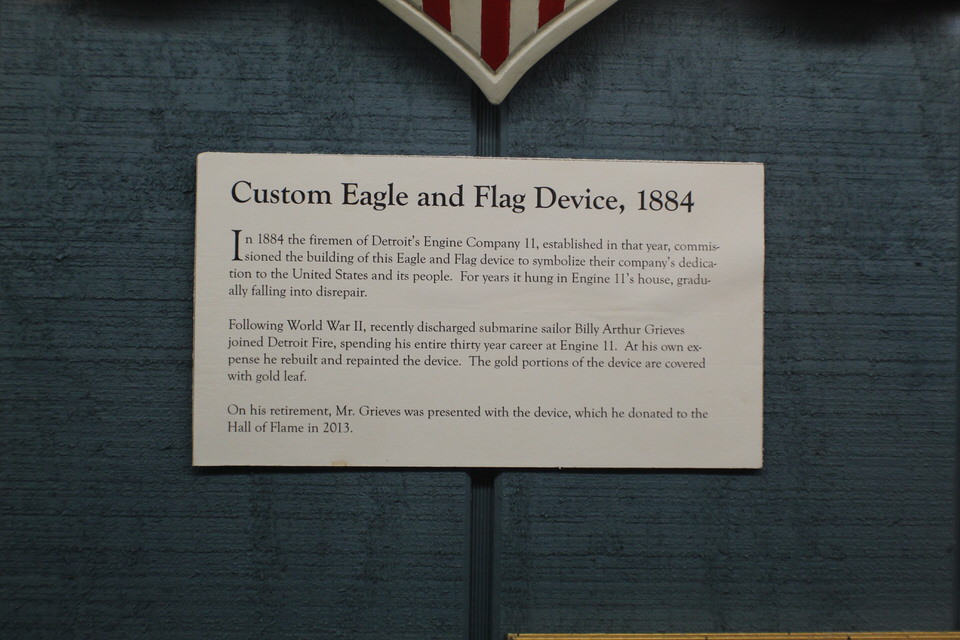 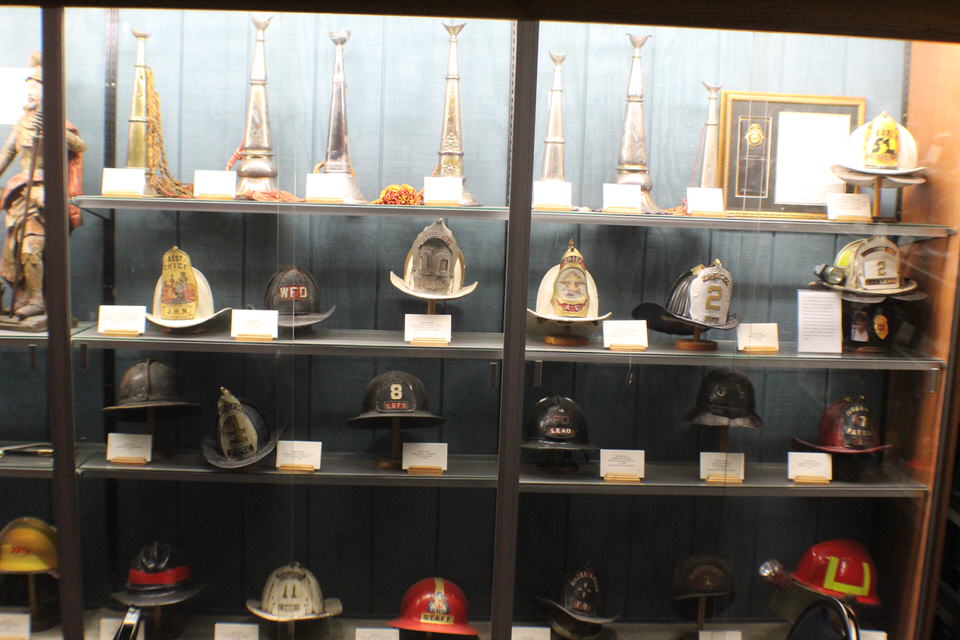 Hall of Flame has over 400 helmets from all over the world in the collection of fire helmets. Most of them are from the United States, Great Britain, Germany and France.  I, for one, never knew there were so many different varieties. 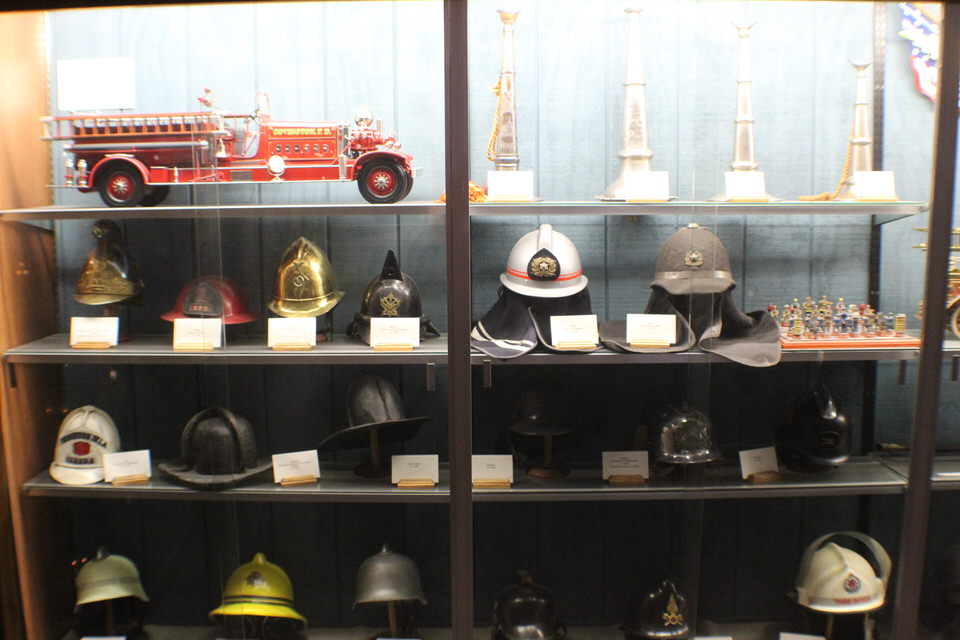 The 9/11 Memorial Pony was created by the director of an arts project in Sante Fe, New Mexico.  It is a memorial to all those police, firefighters and emergency personal who died in the collapse of the World Trade Center.  The horse was felt to be an appropriate symbol because of its wide use in the American fire and police service since the nineteenth century.  The saddle faces the rear symbolizing the death of an important person.  A special paint was applied that changes in shade from fire engine red to flame yellow.  Beneath the pony is a coffin like base that contains a FDNY helmet,  together with a cap of a New York Police Officer and a cap of a New York and New Jersey Port Authority Officer.

The entire crew of Recuse Four died in the collapse of the World Trade Center.  The truck was repaired and placed back in service.  It was retired in 2011, purchased by a Chicago based organization that restored it and exhibited it around the country.  In 2017 it went on exhibit at the museum and in 2018 it became a permanent addition to the Museum’s exhibits.

That’s it for now.  I’ve pushed my luck with my internet connection.  I’ll try and add more later in another blog.

We continue to travel hand in hand down The Road of Retirement.  Our new home is a great one, but with one little problem – we have a bird that likes to dance on the roof and from the sounds of it breaking open some type of shell.  He’s been driving us nuts – literally.

Thanks for checking in with us.  We always enjoy your company and your comments.  Till another blog, take care.