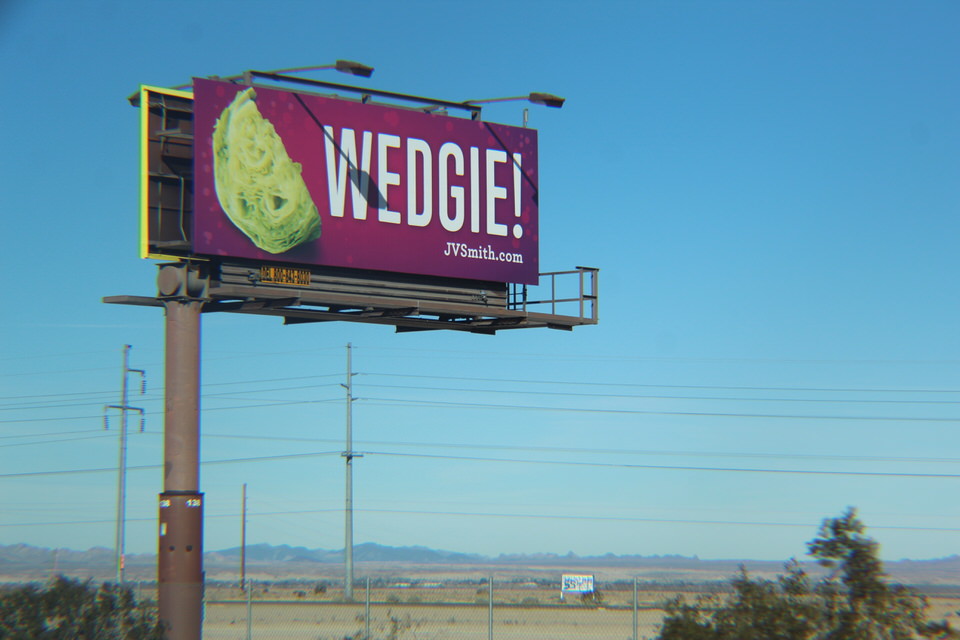 Yuma Crossing and its Importance

How about that sign!  I just think it is so neat.

We keep passing this sign and I finally remembered to snap a picture of it.  It is an advertisement for JVSmith.  A little digging on the internet reveals the following:  JV Farms started in 1988, is an agricultural company that grows lettuce, broccoli, and other intensively farmed vegetable crops. It was formed by John and Vic Smith to grow crops in the vibrant and growing agricultural community of Yuma, AZ. The diversified ground base for the farming operations includes Yuma Valley, Gila Valley, Wellton-Mohawk, and Bard, CA.

Now to today.  Unfortunately, you are not allowed to wash your rig in this park.   Graybeard, though, was definitely in need of a bath.  Especially after sitting just the other side of the scrap yard in the UMOM parking lot.   What to do?  Walking around the park last week I spotted this van

at another site.  Could this be the answer?  I made a call, arranged for an 8 am appointment for today – yeah, what was I thinking, 8 am – and figured they would be late.  Guess who was knocking at the door this morning at 7:45 am?  So much for being late.

They are totally self-contained bringing their own purified water and a small pump that feeds a pressure washer.

They wasted no time, starting with the roof.

They then started on the passenger side.  They spray on a cleaner/wax mixture first.

Then they scrub with a soft bristle brush.  Whatever they use, it removed all of the dirt and many of the streaks that I had been unable to remove before.

I really appreciated their attention to detail.  They made sure to clean all the nooks and crannies. 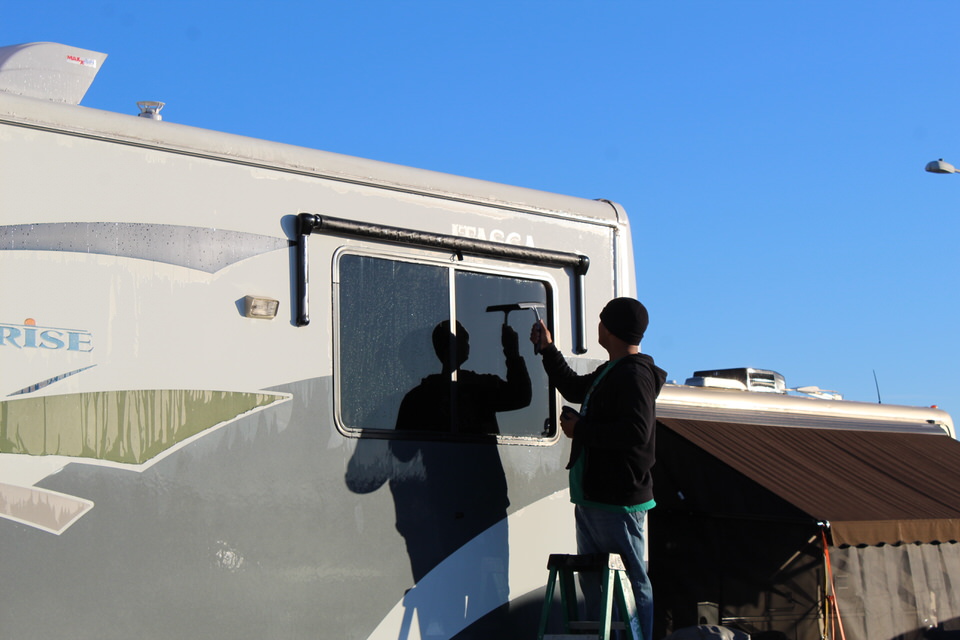 They made sure to squeegee each window.

The driver’s side from the slide back is done and looking spiffy.  Within an hour they had Graybeard looking better than he has in a long time. In my opinion it was well worth the $100 spent.  An additional benefit?  It confirmed that there are no leaks anywhere.

Once they were done I became so inspired at how good Graybeard looked outside, I went inside and started cleaning.  I washed all the windows, dusted and vacuumed.  Now we are spiffy inside and out.  Yipee!

OK, let’s talk a bit tonight about the city of Yuma itself.  Where does the name come from?  What role in history did this Southwestern city play?

Yuma in 1854 was originally called Colorado City.  It was renamed Arizona City in 1862 and finally became Yuma in 1873.  It is believed that the name probably came from the Spanish word humo, meaning smoke, because of the local Quechan Indian practice of creating smoke clouds to induce rain.

What place in history does it play? 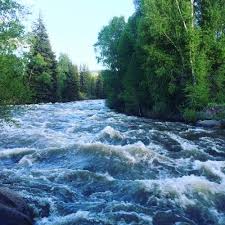 To understand its significance in history one first needs to understand that the Colorado River was once a sometimes free-flowing, often raging, uncontrolled river that was extremely difficult to cross.

So the question back then was always the same, How to get across?  And Where?

Yuma became The Gateway of the West.

All trails led to Yuma. 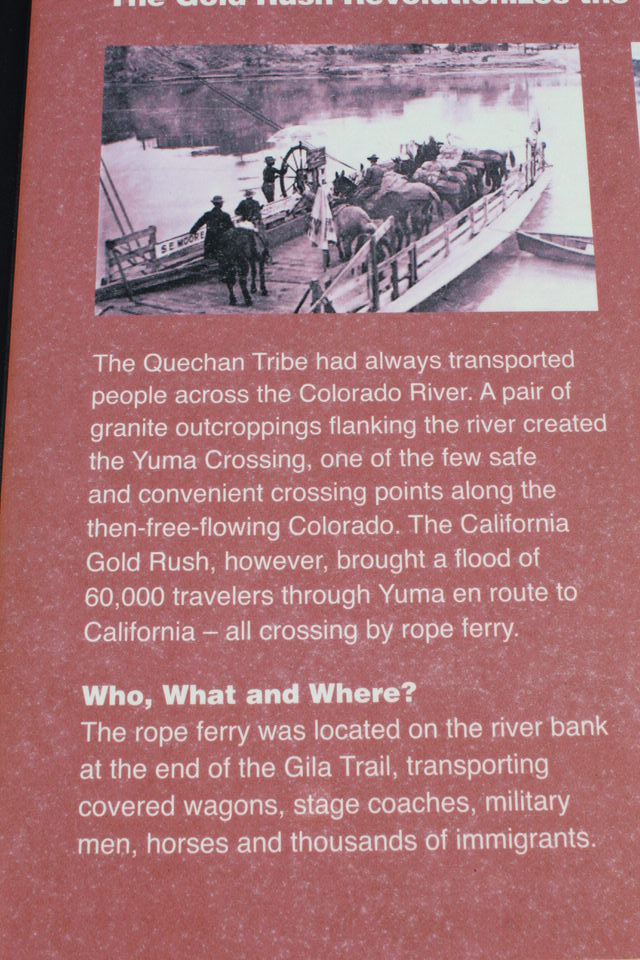 In the beginning the way across was by rope ferry.  The traffic was steady but never really that significant.  Until . . 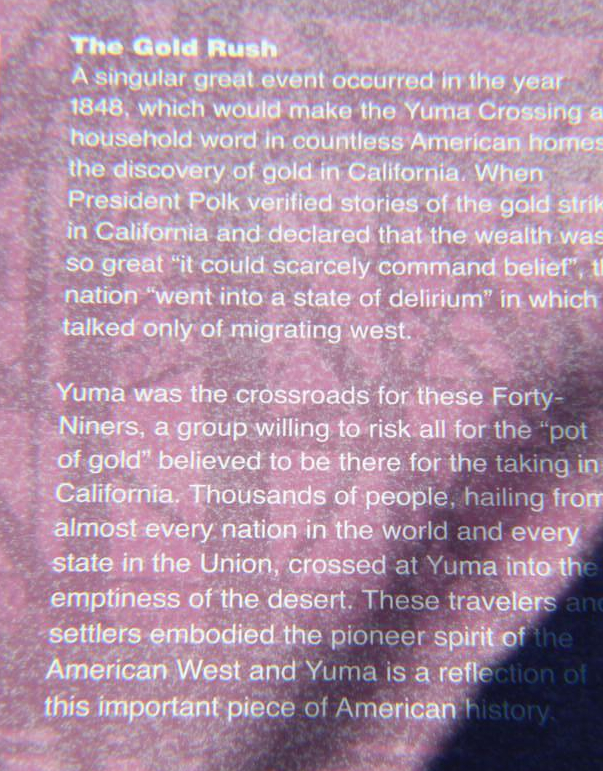 Then came the Gold Rush. 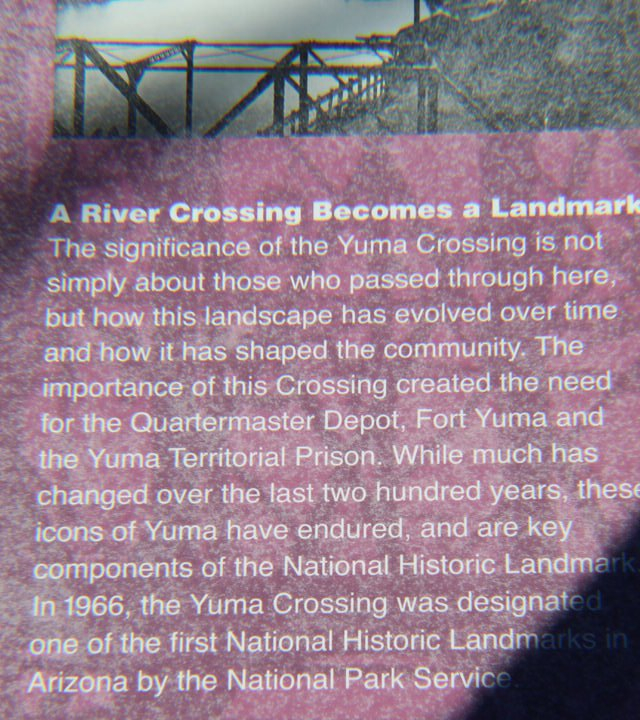 Yuma and its crossing became a National Historic Landmark.

Now, we come to today.

The picture above is of the river back then.

The river at the Yuma crossing today. 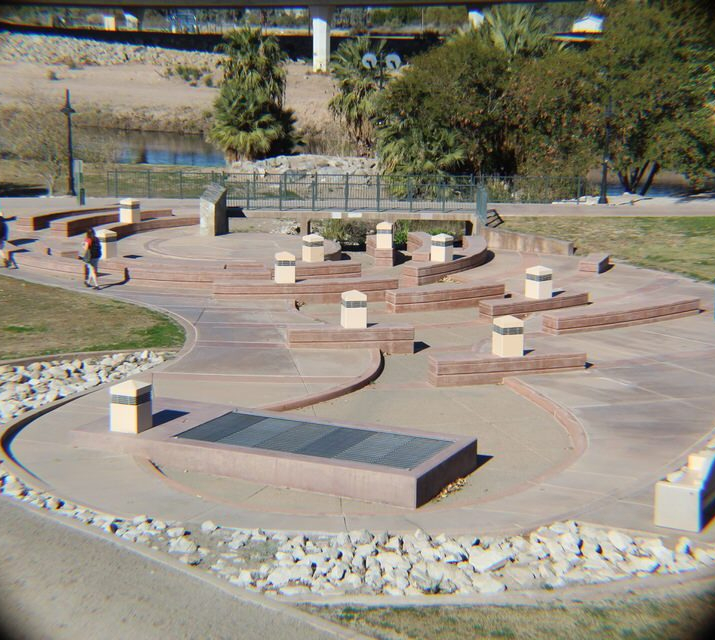 All of what you see here would have been underwater.  The sad fact is the Colorado is nothing like it used to be.  It no longer flows the 70 miles from Yuma to the Gulf of California.  Also, due to several past lean snow years at the headwaters of the river it continues to drop.  Both Lake Mead and Lake Powell also continue to drop at an alarming rate.

That is the beginning of the story of Yuma.  There is more to tell and hopefully in the coming days I’ll be able to share what other factors fashioned this unique city known today as the sunniest spot in the whole United States.

Another day is in the books for the two of us traveling along on The Road of Retirement.  The day started with Graybeard getting a needed cleaning.  The day ended with me at the dentist – to whom I return again tomorrow.  Yuck.  So be it.

Thanks for coming along with us today.  As always we appreciate your company and your comments.  Till tomorrow.