My Turn to Clean The Loo

RED FLAG WARNING REMAINS IN EFFECT UNTIL 8 PM MST THIS EVENING FOR STRONG WINDS AND LOW RH… SOUTHWEST WINDS 25 TO 30 MPH GUSTING 35 TO 40 MPH. * HUMIDITY…FALLING TO 10 TO 15 PERCENT IN THE AFTERNOON. . A RED FLAG WARNING MEANS THAT CRITICAL FIRE WEATHER CONDITIONS ARE EITHER OCCURRING NOW….OR WILL SHORTLY. A COMBINATION OF STRONG WINDS…LOW RELATIVE HUMIDITY…AND WARM TEMPERATURES CAN CONTRIBUTE TO EXTREME FIRE BEHAVIOR.

I would be having a ball now if I still had my sailboat.  Winds like that mentioned above would have the sails reefed down, rail in the water, and we would be flying along.  It’s a different story, though, in an RV.  I’m just glad we are parked and not on the road.  I’ve driven only once in winds like this and it was no picnic.

This was my morning project.  I’ve had a persistent drip behind the valve body for the outside shower.  Hey, it’s a wet locker so I didn’t see any need to rush into finding out what was wrong and fixing it.  But, the time had come and today was the day.  I found one fitting that was loose and was able to tighten it so hopefully the drip is resolved.  I’ll keep an eye on it over the next couple of days. 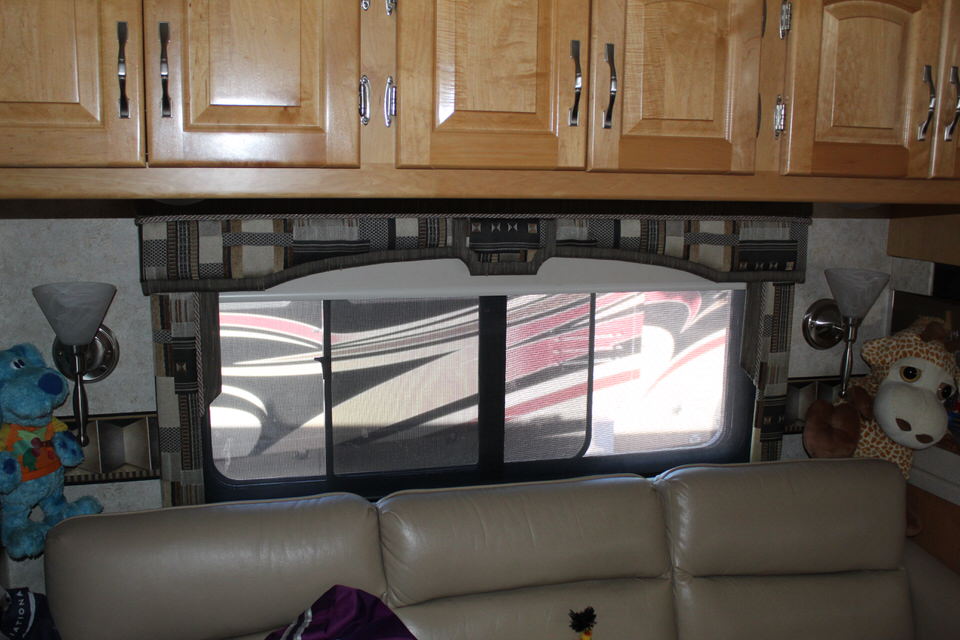 Next project was the day shade in our living room on the passenger side.  All of a sudden it doesn’t want to stay down.  I found a few possible fixes on the internet so today I removed the valance and the shade, and attempted to resolve the issue.  No luck.  I’ve fired off an email to MCD for some advice.  Hopefully, they will have a solution that doesn’t involve replacing the whole shade.

My turn to clean the loo or as we so fondly refer to it as the bathroom.  Here’s some trivia for you:  Toilet rooms often include a sink (basin) with soap for handwashing, as this is important for personal hygiene. This room is commonly known as a “bathroom” in American English, a “loo” in British English, a “washroom” in Canadian English, and by many other names across the English-speaking world.  Now we know.

Time again to fire up the grill.  Today I made a couple of steaks that we bought just before we left Congress.  They were delicious and along with them Barbara made a special concoction of cabbage, onions, spinach, and . . .well I can’t quite remember.  But I do know it was tasty and I finished my portion without a problem.

Look what I discovered.  It’s called Scan Gauge.  It plugs in the diagnostic port under the dash and allows one to track, among many things, such vital statistics as:

I’ve been looking for something like this ever since we purchased Elvira.  To say that the stock gauge package with this rig is a bit lacking is putting it a bit mildly.  I’m going to purchase this gauge before we leave here so I can accurately monitor what’s going on with the engine going forward.

That was our day on The Road of Retirement.  It was just the kind of day we like.  I resolved some issues.  Barbara made a fantastic supper.  In addition she was able to get a couple loads of laundry done.  Not a bad day at all.

Thanks for your company today.  We trust that you had as great a day as we did.  Always appreciate your comments.  Keep safe.  Wear your mask – if not for yourself then for someone else.  Remember, six feet apart or you could end up six feet under. Wash your hands often.  Catch you tomorrow.