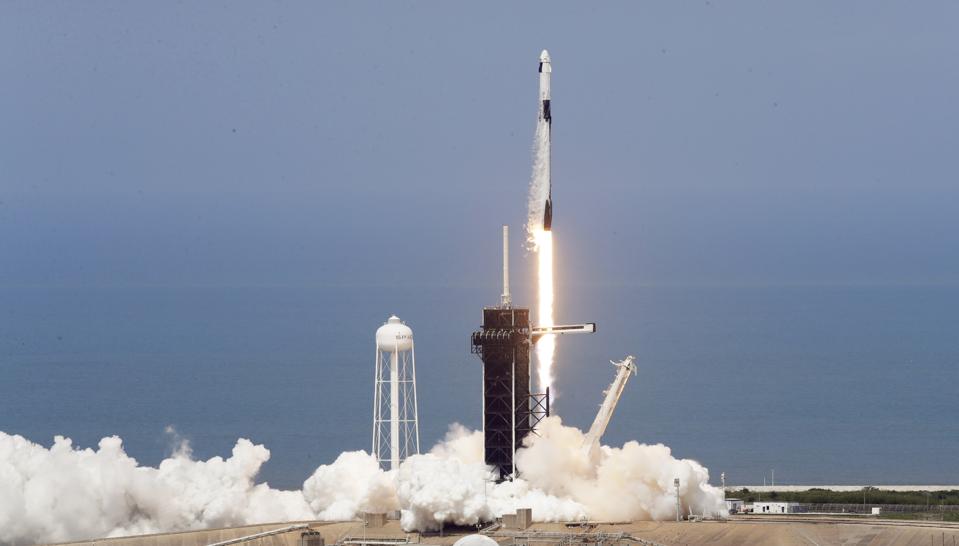 Did you see that rocket go!  What an accomplishment for our country.  It was so thrilling to see that rocket lift off, to watch on a live feed the astronauts in the cockpit, then to see that first stage return to earth and stick the landing.   The astronauts are now in orbit and preparing to dock with the International Space Station.  God speed to both of you, Bob Behnken and Doug Hurley.

Despite the heat we both knew we needed to get out.  After all it was only 104 degrees so not a problem.  Especially since there was a strong breeze blowing all day.  More about our escapades in the coming days but first we’re going back to the Mohave Museum to finish our tour.

This is the last major hall of discovery.  Oh, about those outside exhibits, they were temporarily closed so we didn’t get to see them.

A time line regarding mining in this area.  As we were soon to discover, along with ranching, mining played a huge role in the development of this area.

Thank you very much but I’ll stick to Elvira.

I’d love to know what led to the enactment of the City Ordinance on the left!

Cordella Kay.  Talk about one tough lady.  She, literally, did it all and became a very successful and shrewd business woman.

The first silver mine in the area.

Seems someone didn’t think far enough ahead before beginning the development of the town.

Well, at least something survived when the mine went bust!

So much for the mines.  They, indeed, played a pivotal and important role in the overall development of this area.  Without them, well, I believe I can honestly say we probably would not be sitting here in Fort Beale RV Park because there would be no Kingman, AZ.

Kingman Army Airfield.  This is where many miners went to work because of better wages.

A bit of research regarding the airfield revealed the following:

The Army Air Force Flexible Gunnery School, Kingman, Arizona, was built at the start of World War II as an aerial gunnery training base, located on approximately 4,145 acres in Mohave County next to U.S. Route 66. Arizona was an ideal location due to its sparse low population and miles of wide open spaces.  It offered its first classes in January of 1943, and was renamed Kingman Army Air Field (KAAF) later that year with the primary mission of training gunners for the B-17 Flying Fortress.  The air field became one of the Army Air Corps’ largest, training 35,000 individuals. Its facilities included housing for 3,200 enlisted men, 3,070 cadets and 430 officers. “Bugs Bunny” became the base’s official mascot because of the large number of rabbits that inhabited in the area. The base newspaper was known as the “Cactus”. With the end of the war, additional training bases were not needed, and Kingman was ordered to close.

Active duty military personnel typically flew the aircraft into Kingman, and civilian employees would handle parking and classification. To accommodate the large numbers of employees, tent cities were erected on site. In subsequent months, brand new aircraft directly from assembly lines were even disposed of at Kingman.

Once at the storage depot fuel was drained from the aircraft and sold. Aircraft engines were then removed and placed in rows on the desert floor.  Interior items of the aircraft such as radios, oxygen equipment, handguns, manuals, life rafts, fire extinguishers and instruments were removed.  The main aircraft airframe was then sliced into major pieces using a guillotine. Some hand cutting of smaller parts was also done.  The final step was placing parts into the smelter, or furnace, for melting. Three furnaces were operated at Kingman for melting about 70% of an airplane’s metal components into ingots. The furnaces were run 24 hours a day, and could consume up to 35 aircraft a day.  A total of 85 reconnaissance aircraft, 615 fighters, 54 light bombers, 266 medium bombers and 4,463 heavy bombers were disposed of. These 5,483 aircraft scrapped at Kingman generated $7.5 million in gross income.

By July of 1948, less than three years since the end of WWII hostilities, the job was done. A huge part of the American airpower fleet had been reduced to ingots. Storage Depot 41 was returned to the county as a municipal airport. Today, the Kingman Airport & Industrial Park is located five miles north of Interstate 40 in Kingman, Arizona, and spans 4,000 acres. The industrial park is a vibrant commercial community, and home to more than 70 businesses in diverse fields, including the temporary storage of airliners.

But not everything was melted down.  Take a look.

Just who, and why did someone cut this piece out and hide it?  No doubt it holds special meaning for someone, but to date the museum has been unable to find that one special person.

Our tour of the Mohave Museum is now finished.  If you are ever in the vicinity of Kingman I encourage you to take time to visit it.  It is absolutely fascinating and so informative.

Day is over and night is here and we’ve come to the end of another day on The Road of Retirement.  We had a delightful couple of hours out and about today in the town of Kingman and the surrounding area.  More about that in a coming blog.  As of now it is time to sit back and relax and enjoy a glass of wine.  Hope your day was as great as ours was.

Thank you for taking the time to read our blog.  We’re grateful for each and everyone of our readers and their comments.  See you tomorrow.