Get Your Kicks On Route 66 – Traveling Arizona Route 66, Moving On Down the Road

I say we begin with a bit of humor today. 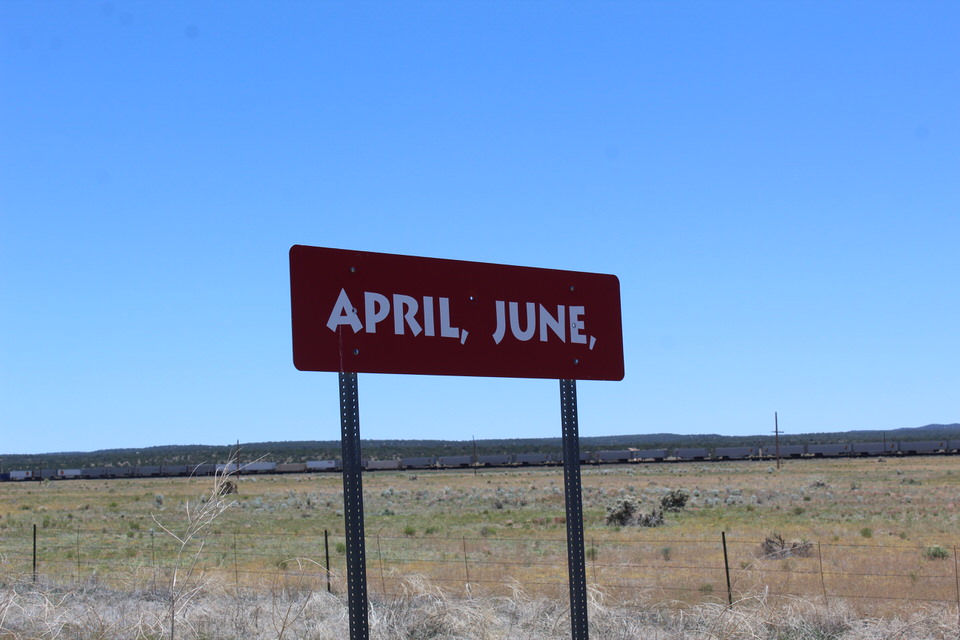 This is just one of many pithy Burma-Shave sayings we encountered on our journey along Route 66.

Time for our next stop on our road trip on Route 66.

Our next stop is the town of Truxton.  The town was a hub of activity until 1979 when the Interstate past it by.  Mildred and Ray Barker operated the Frontier Motel and Restaurant starting in 1957. He died in 1990 and she operated the place until 2012.

Needless to say, there are definitely vacancies today.

Truxton Cafe sits idle along Route 66 after decades of serving travelers along the Mother Road between Seligman and Kingman.

Truxton Station is the one filling station that’s still selling gas in the town.

A bit of trivia:  The town was named for Lt. Edward Fitzgerald Beale’s son Truxtun (note the spelling). Lt. Beale surveyed a wagon road from Fort Smith, Ark., to California in 1882-83. Beale found a spring at Truxtun and the Atlantic & Pacific Railroad later built a pump house and water tank to supply its trains. The A&P changed the name to Truxton.

Moving on down the road.

We come now to the town of Peach Springs.  Yes, it gets it’s name from the Springs discovered in the area.  The springs were reliable water sources that were used by Native Americans for centuries. Euro-Americans became aware of the springs during explorations in the eighteenth and nineteenth centuries. Beginning in 1858, travelers along the Beale Wagon Road increasingly used Peach Springs as a rest stop and watering place.

In 1866, the U.S. government granted the Atlantic and Pacific Railroad  a right-of-way to build a transcontinental railroad, and construction through northern Arizona was completed in 1883. With its abundant water, Peach Springs became a water stop for the old steam locomotives and a major train yard for the railroad.

A lively railroad town sprouted along the tracks at Peach Springs.  A railroad spur line  to the Grand Canyon via Peach Springs led to the construction of a Harvey House restaurant and hotel for tourists. .

But then came the beginning of the end.  At the turn of the century, the  Grand Canyon Railway moved it’s southern terminus to the Grand Canyon to Williams The decline in tourist traffic was almost immediate.  Then In 1907, the railroad moved its train yard to Seligman, leaving Peach Springs as only a minor stop along the tracks.

Peach Spring is the Hualapai Nation’s Tribal capital, and is home to the majority of the Hualapai people whose ancestors can be traced in the area for more than 1,000 years. The Hualapai Tribal Nation is a federally recognized Tribe with a Reservation that encompasses one million acres of land with 108 miles of land running along the Colorado River and the Grand Canyon.

When we first entered the town we couldn’t figure out what was going on.  Every turnoff to tribal land was blocked off with concrete barriers and a police presence.  Then I did a bit of research when I returned home and I discovered that the tribal land is under a lockdown to visitors.  They are trying to prevent any new cases of the virus among their people.

The Hualapai Lodge sits right on Route 66 at the heart of Peach Springs and has the best accommodation for those wanting to experience the  the Hualapai Cultural Center which is just a few steps away.  Unfortunately, both are temporarily closed.

Time to get back in the car since we have miles to go.

When you spot this guy you know you have reached

The caverns were first discovered in 1927.  They were first called Coconino Caverns, which later changed to Dinosaur Caverns before becoming known as the the Grand Canyon Caverns.

This is the miniature golf course – unfortunately, you’ll be playing in the rough for your entire game.

Did you catch a bit of the above?

Swim in our pool?  Forgot your suit?  Go naked!

Purchase gift for someone you love back home.  If you loved them, why did you leave them?

Don’t be fooled, the tanks are empty. 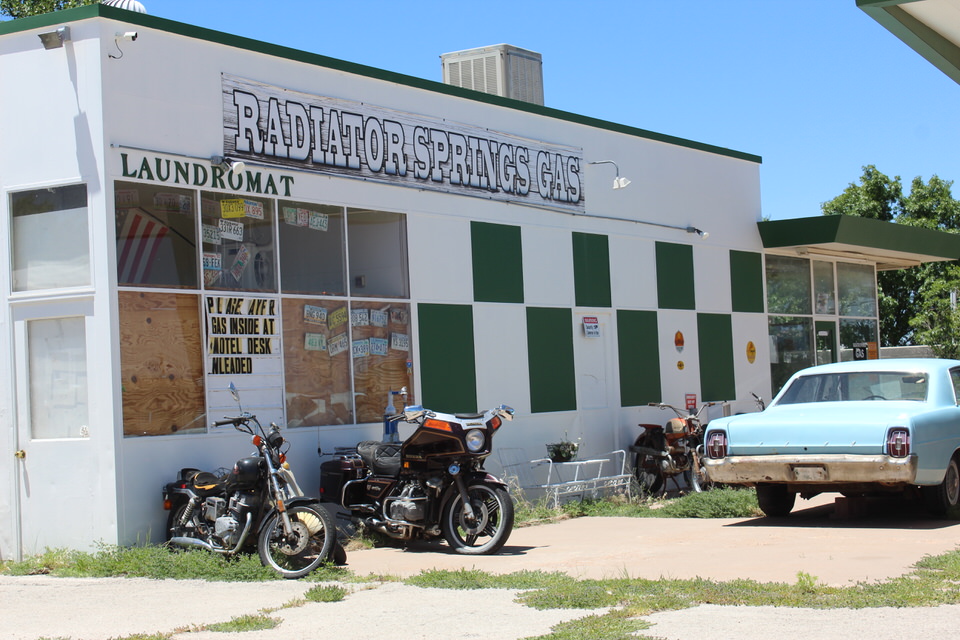 The bikes are for sale. 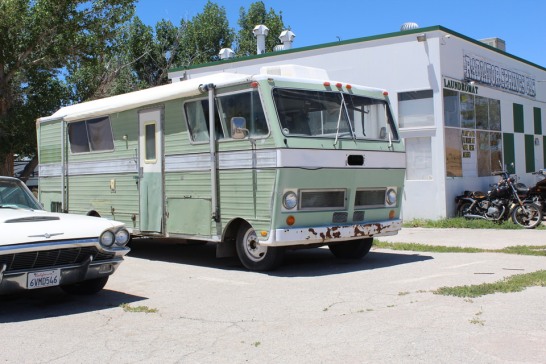 So is the motorhome and most of the cars.

On the way back to the RV Park and the Caverns tour office. 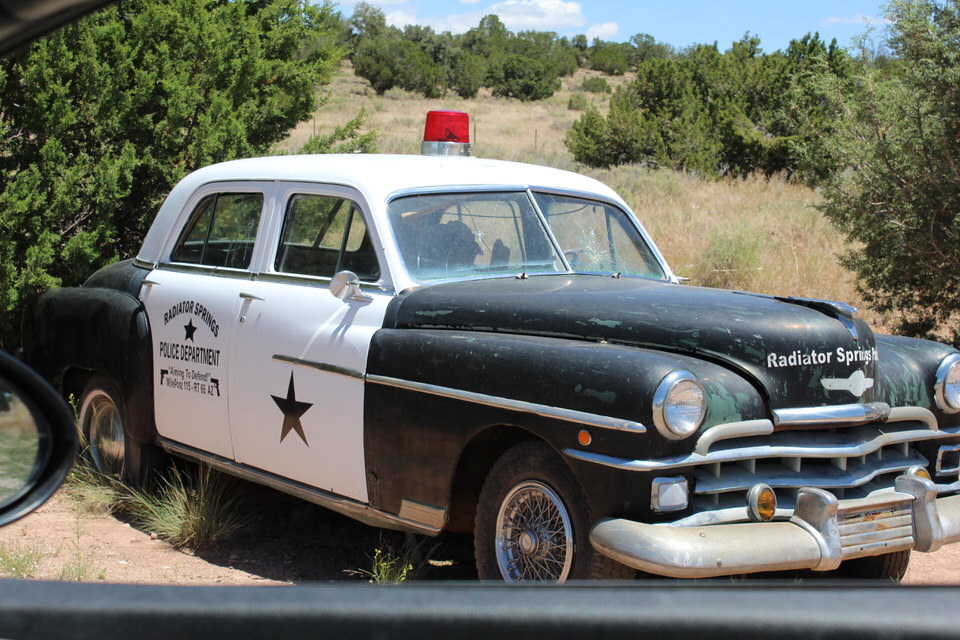 Radar trap!  Hidden behind a large bush you don’t even see the Sheriffs car until you pass it.

This is the entrance to the largest dry cavern in America.  The cavern is 200 feet below ground and is filled with a labyrinth of limestone passageways and beautiful rock formations.

Need a room for the night?  You can either check into the Caverns Inn above ground, or for a really different experience try the underground Cave Motel Room. Imagine, if you can, spending the night in the oldest, darkest, deepest, quietest, and largest suite room in the world. Imagine, 21 stories below ground, in a cavern that took 65 million years to form, in a room that is 200 feet wide, 400 feet long with a 70 foot ceiling.

There is also the Cavern Grotto Restaurant.  To get to this restaurant, you’ll need to take an elevator. You’ll be taking it down—21 stories down—into a 345-million-year-old cave network that stretches 60 miles to the Grand Canyon.

Unfortunately, neither the cave tour or the restaurant fit into our schedule during our visit here.  Hopefully, another day.

About that RV Park?  Can you say a bunch of uneven, rutted dirt sites with water and electric.  No way would I ever want to stay there.

Really?  I guess someone has a weird sense of humor. 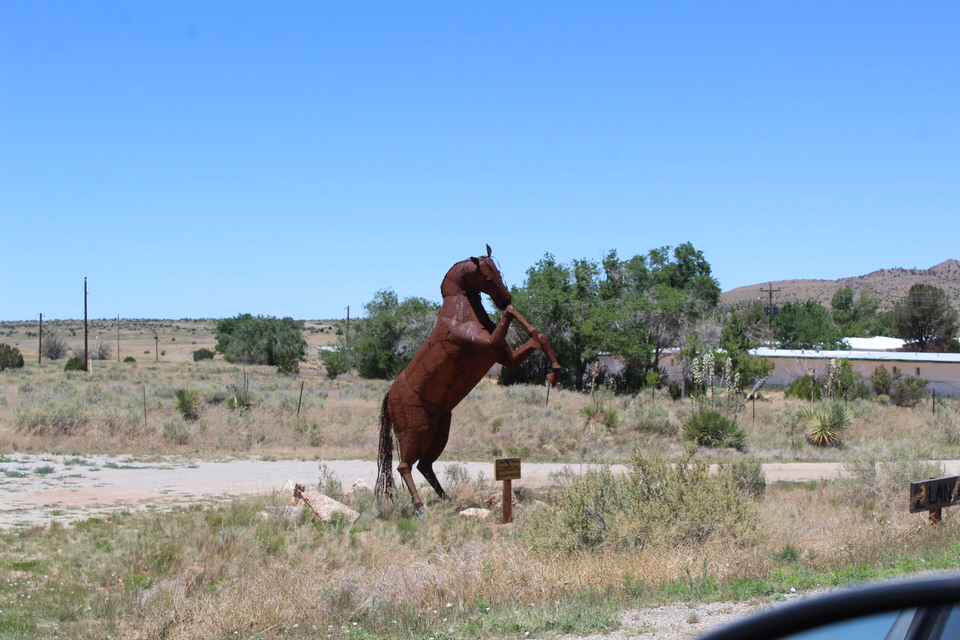 On the way out.

Time is a’wastin and we have miles to go.  On to our last stop. 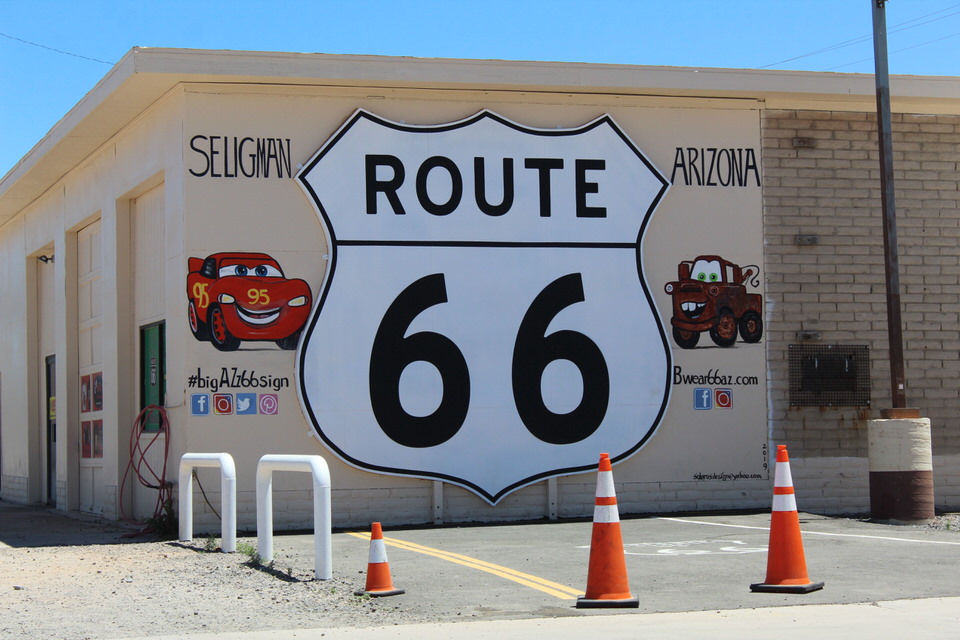 Seligman best keeps the history and past of Route 66 alive in this area with a collection of restored buildings and its charming main street.

Outside the General Store.

Find it on the side of the road and they will cook it – only kidding!  But they do indeed have some unusual meals. 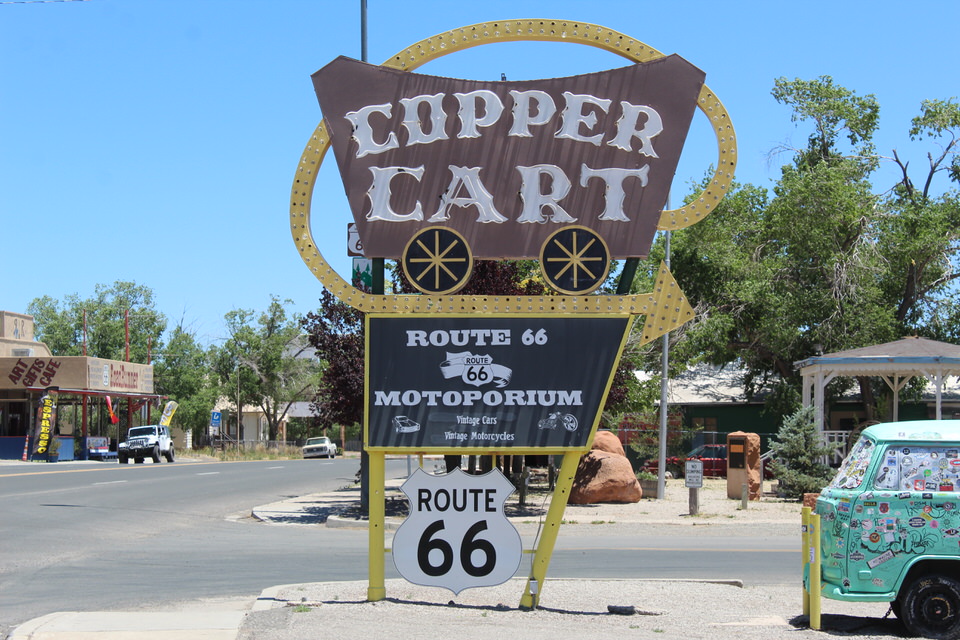 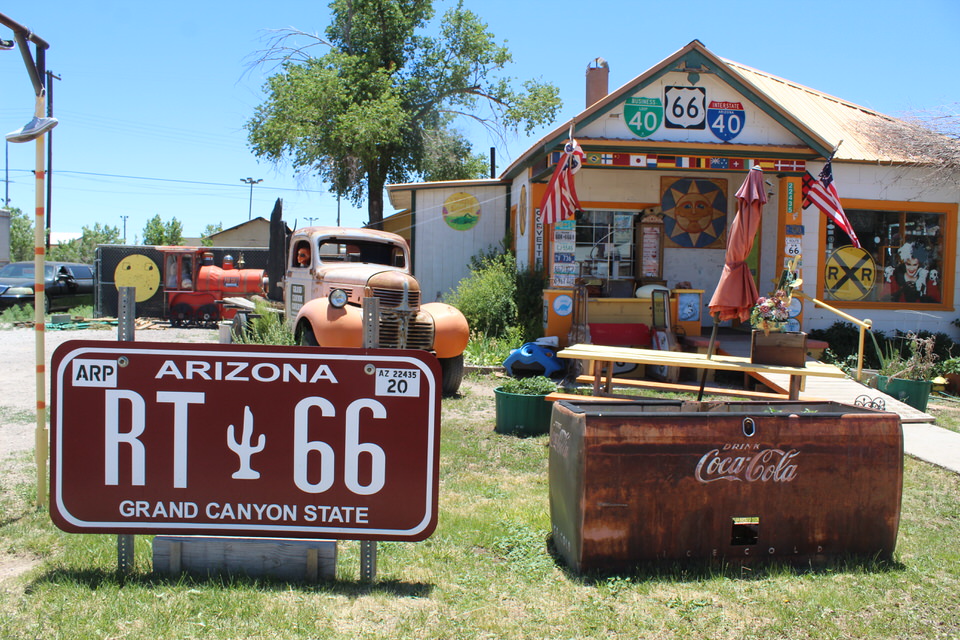 Now, time to go to the holy mecca of Route 66.  The birthplace of Historic Route 66 and the reason the road is still alive in Arizona today. 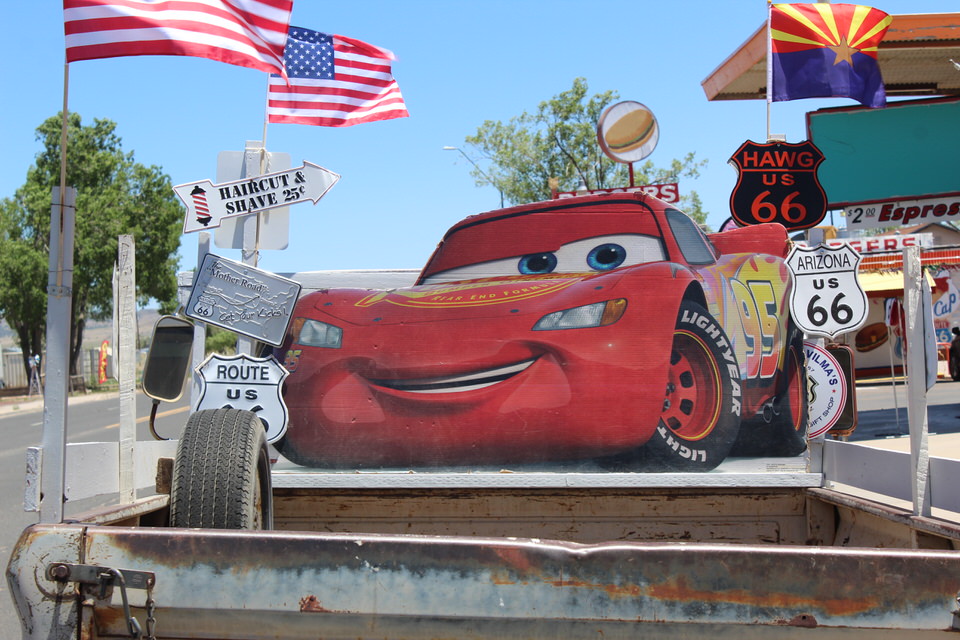 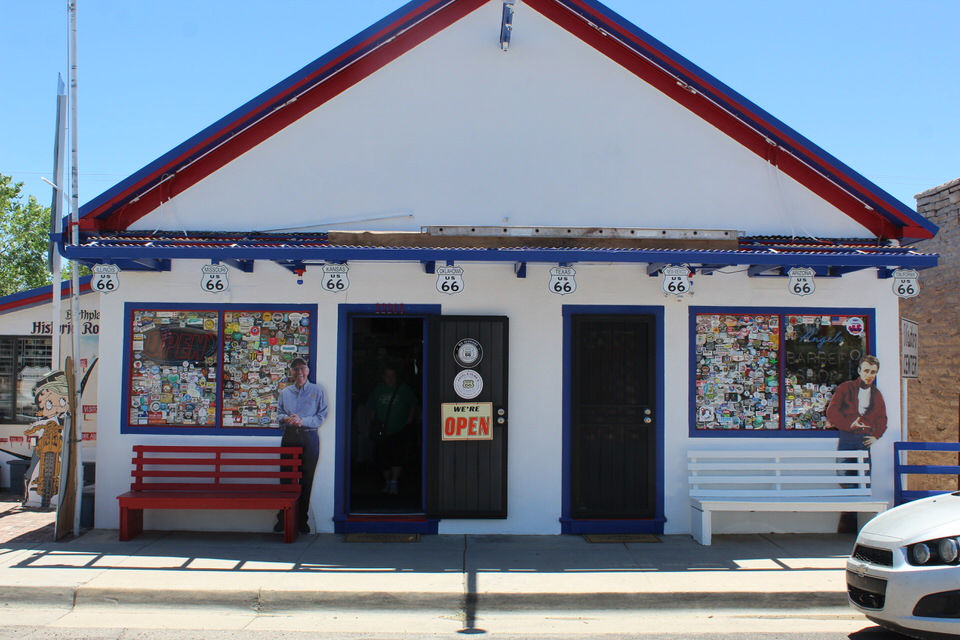 This is a must see for those who love Route 66. 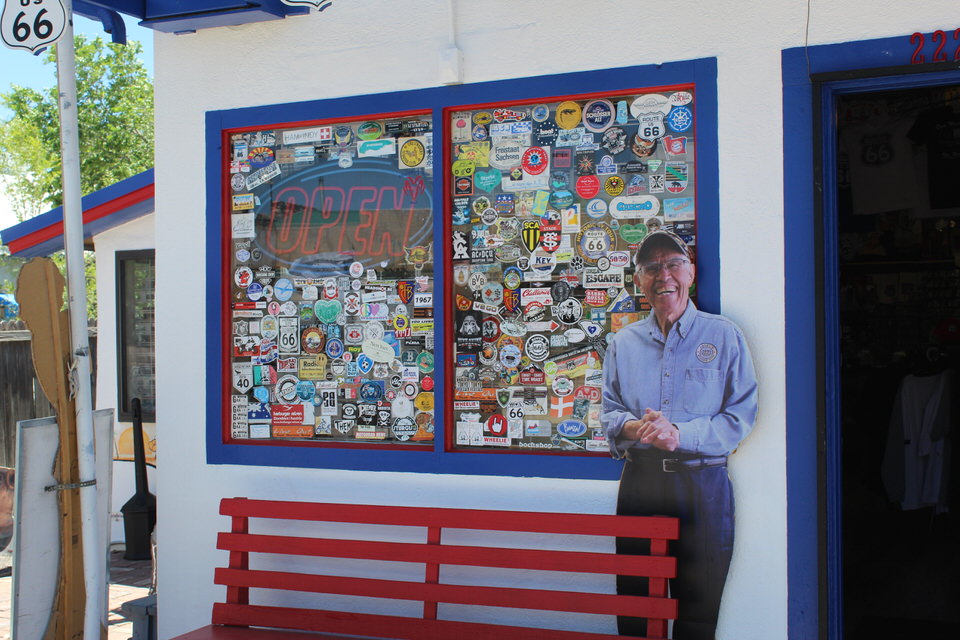 Born and raised in Seligman he witnessed first hand the devastating effect that Interstate 40 had on his home town; businesses closed, buildings were abandoned, and people moved away.

But rather than just sit back and watch his hometown become nothing more than a distant memory he went to work.  He rallied local residents to petition the State of Arizona to designate Route 66 as a Historic Highway.  It didn’t happen over night but finally in 1987, Seligman became known as the Birthplace of Historic Route 66 and the Historic Route 66 Association of Arizona was formed, inspiring other Route 66 towns to follow the example of Seligman.  A full-throttle Route 66 revival was born.

He was once a barber and we had heard that he – at the age of 93 – usually rode his bike to the gift store at least once a day.  Sometimes, he even gave a customer a haircut.  But alas, his daughter said that because of the virus she and her sister would not allow him near the store for the foreseeable future.  Understandable, but disappointing.

This is as close as I could get to getting a haircut from Angel.

Items in his barber shop and the gift shop. 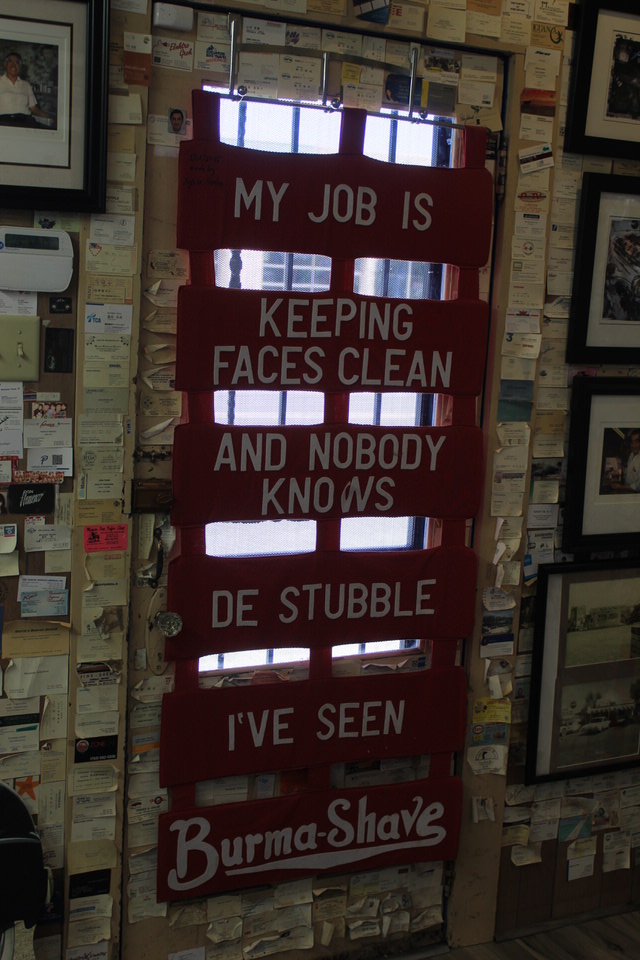 For a mere 10 cents you could have a tooth pulled!

Though the virus has slowed the flow of visitors to the shop, adoring fans from around the globe still flock to the gift shop for a brief glimpse if possible, or maybe one of the stories, from the man who inspired a community, the nation, and the world to preserve a piece of America’s motoring history.

One more stop to make. 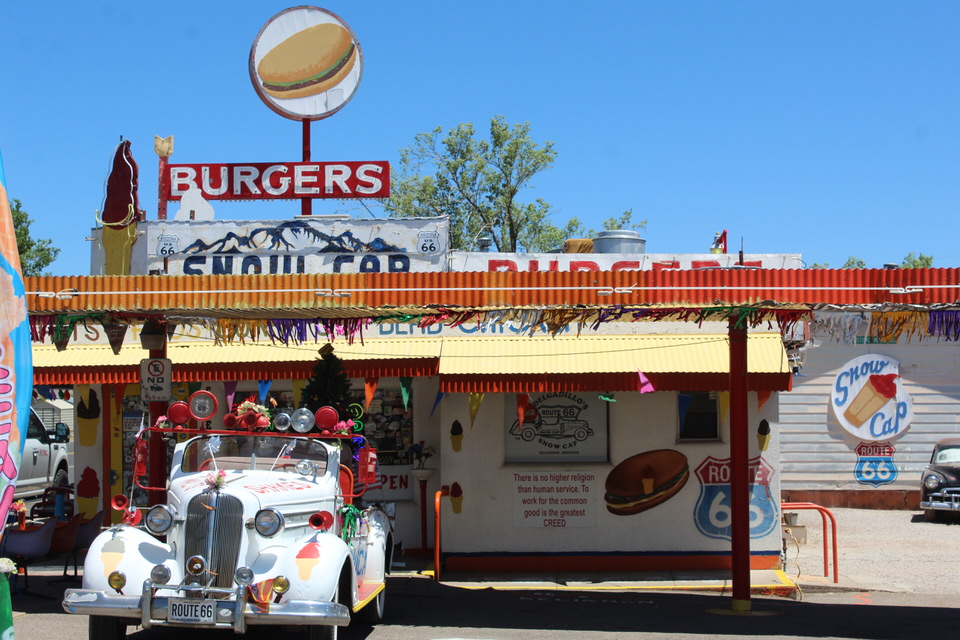 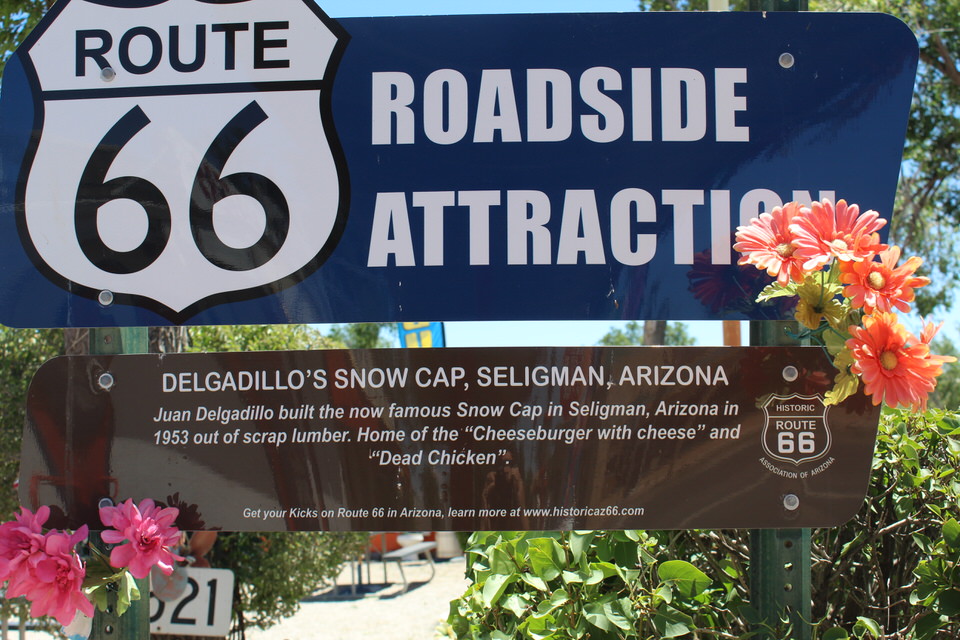 This was built and run by Angel’s brother until his passing last year.  His children have stepped up and now run the establishment. 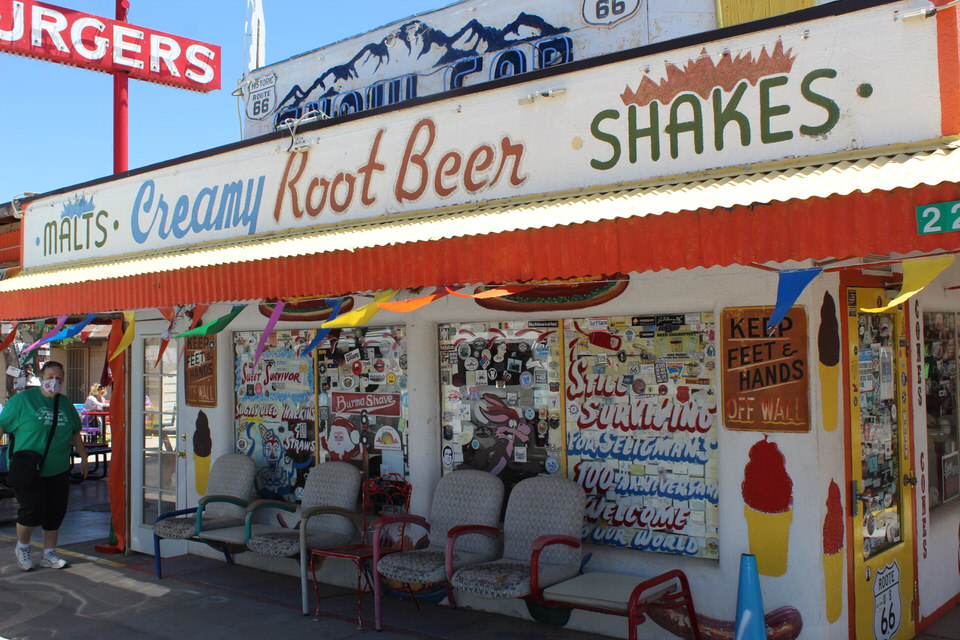 Oh yea, this is the bathroom.  Don’t fret, modern facilities inside. 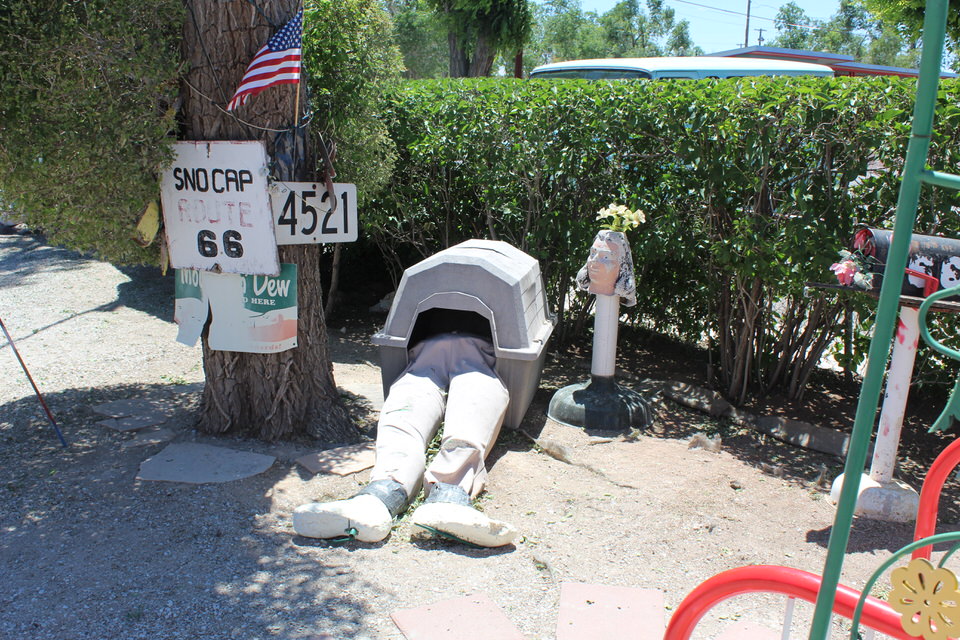 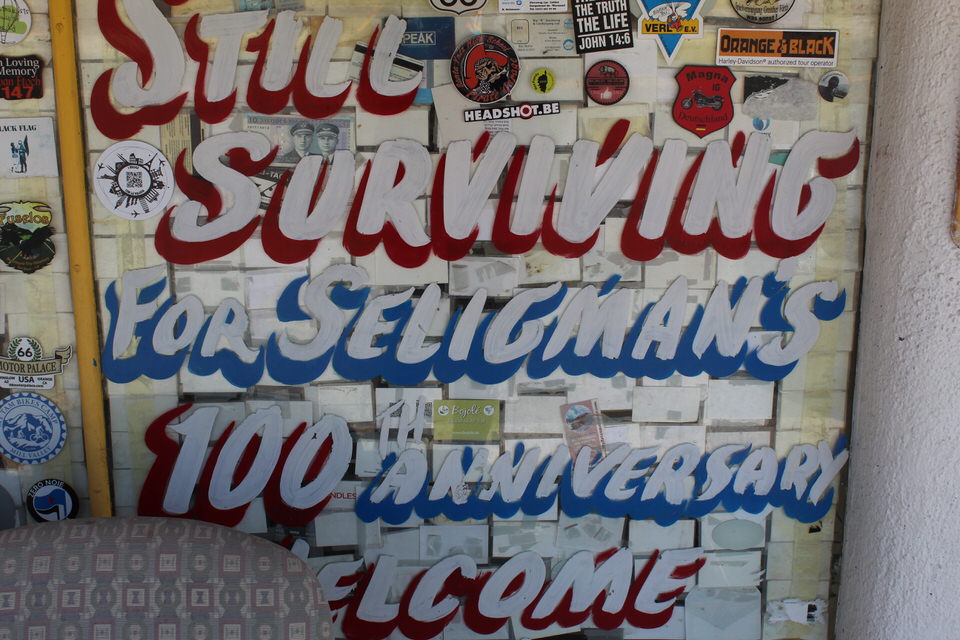 This has to be one of the funniest food stops we’ve made in a long, long time.

Barbara asked about the size of the burgers they serve, they offered this!

I asked for a little ice with my drink! 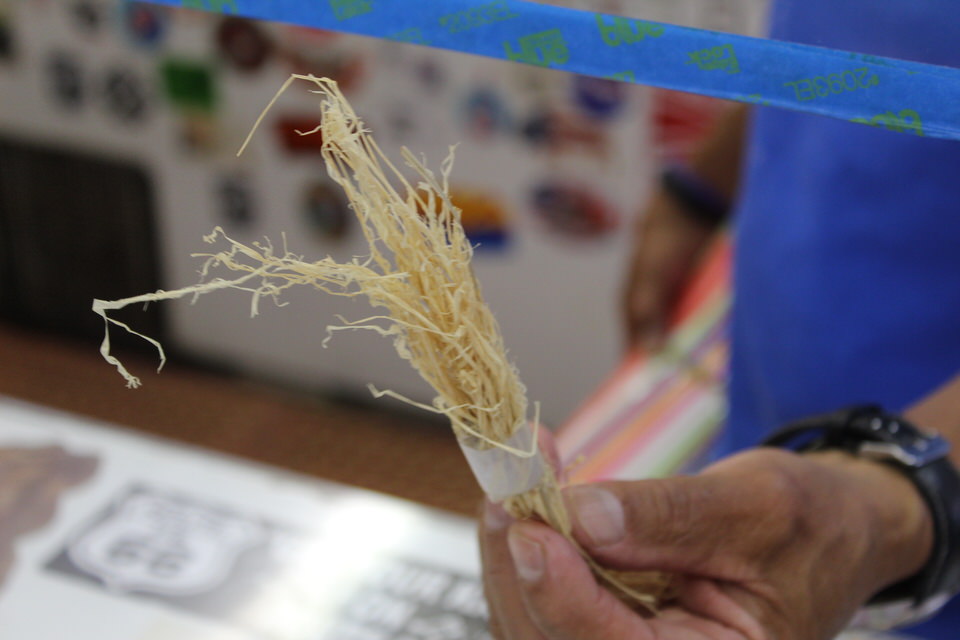 We both asked for a straw with our drinks.  By now we should have known. 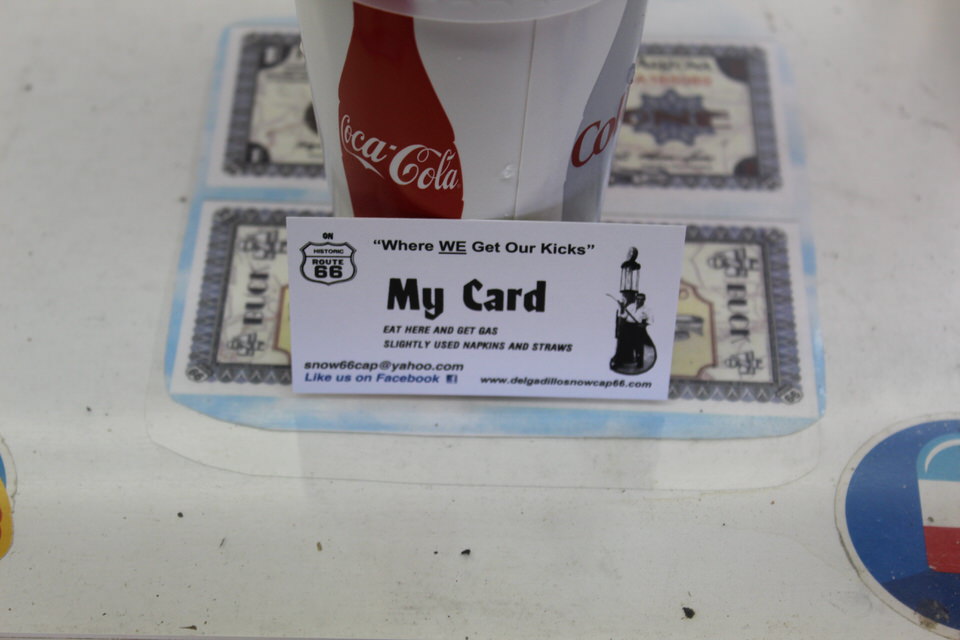 The gentleman serving us said Before you go take my card. 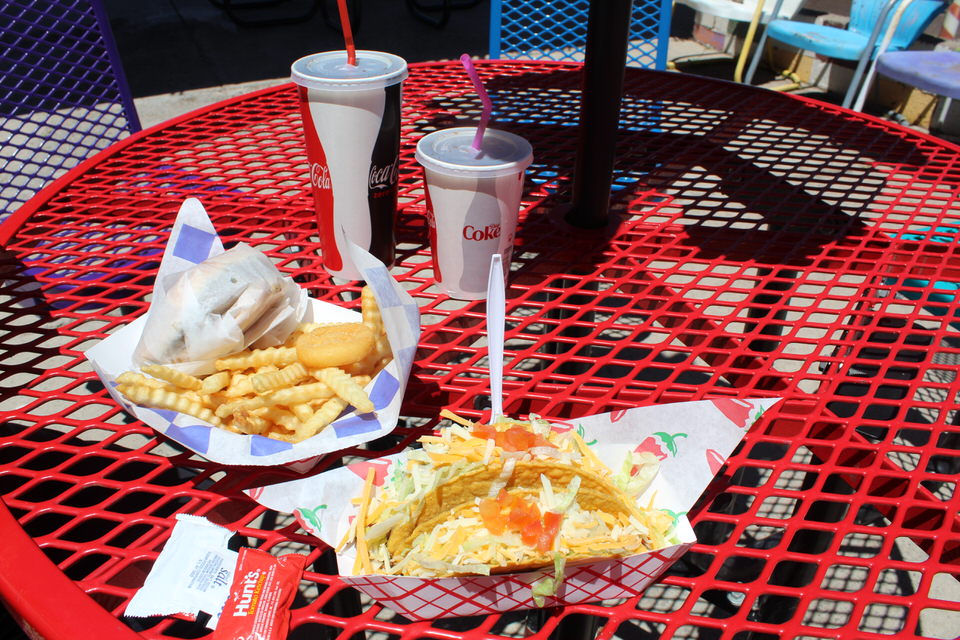 Ah yes, lunch was  tacos and a burger.  Not bad, but nothing to write home about.  But it filled the tummy and that was enough for both of us.

That brings to an end the first of our Route 66 road trips.  I hope you enjoyed it as much as we did.  I’m so thrilled we had a chance to drive this piece of American history and discover its history along the way.  If you’re ever in this area, let me encourage you, hop off the Interstate and put some miles in on Historic Route 66.

I came home with not one, but two new T-shirts.  And a new coffee cup!

Time now to call it a day on The Road of Retirement.  It’s take me a little bit of time to put a blog like this together and the hour is now late.  So off I go to get my beauty sleep.  We’re off on another road trip tomorrow so I definitely need to get some shut eye.