Home Is Where We Park It:  Red Barn RV Park & Horse Motel

Travel Day – What An Adventure

We knew that in order to get settled in at Roswell before the afternoon heat set in we would need to get there by noon which meant an unusually early start for us.  Therefore, though totally out of character for us we were up at 7 am and actually on the road by 7:30 am.  A new record for us. 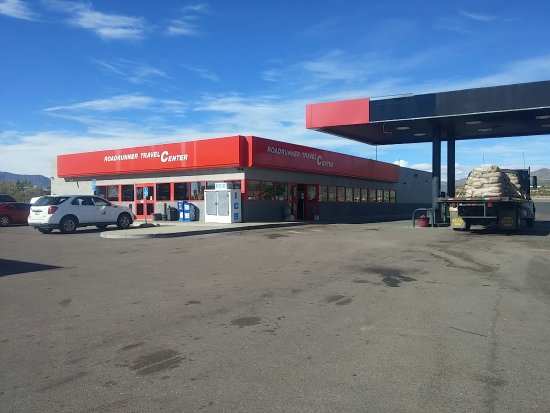 Our first stop was for fuel at The RoadRunner Travel Center.  This is the first time we actually had an opportunity  to check what fuel mileage Evira is getting.  I was delighted to discover that with the generator constantly running we were still getting a respectable 7.5 mpg.

After our fuel stop it was only about 30 minutes to 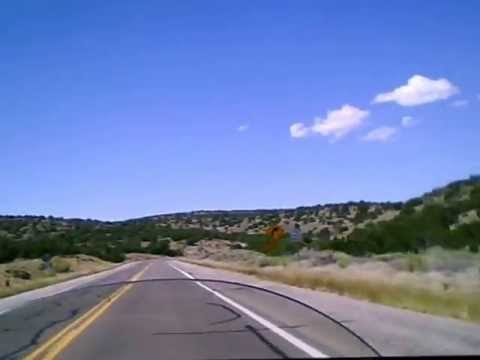 the turn off for New Mexico 380.  This would take us all the way into Roswell and directly to our overnight stop.

The first and gravest mistake I made regarding this route was to assume that since it was a truck route it would be a four lane divided highway.  Oh no, no, no!

It turned out to be

a route with some serious straight up hills to climb in the 100 degree heat.

a route with some really, really long hills that went on for several miles to climb in the 100 degree heat

later a washboard road that could shake your fillings out

a road with some serious twists and turns both up and down that made for some white knuckle driving.

How did we make out?

It was tense at times that is for sure.  I was fighting the road and at the same time trying to keep Elvira from overheating.  On some of the worse of the mountain climbs I had to gear down to third to bring the RPM’s up to 2000 just to keep the water temperature between 200 to 205 degrees and the transmission temperature under 205 degrees.  The old girl has never run that hot before but I guess given the outside temperatures and the severity of some of the mountain climbs I was lucky the temperatures did not go any higher.  The important thing is, we made it!

Just about noon time we arrived at our overnight stop.  We’ve been here before and absolutely love this little gem of an RV park.  Lee, who owns the park makes you feel like one of the family.  She is a remarkable woman who runs a first class park.

This is about the extent of the park.  Notice anything familiar?  Yup, sitting off in the back, just right of the flag pole is Graybeard our first rig.  Today, we’re in one of the two pull through sites.  That way we can make an easy escape in the morning.  Tomorrow we’re on to the great state of Texas.

That was our day on The Road of Retirement.  It’s been a day neither of us will forget for some time to come.  Hopefully, going forward they’ll be no more roads – at least for some time – like we traveled today.  I’ve had enough for now that is for sure.

Thanks for making the trip with us today.  We always enjoy your company and appreciate your comments.  Be safe out there.