Home Is Where We Park It:  Mike Roess Gold Head Branch State Park

Back in Business – It Only Took A 30 Minute Ride

Yes, we found a Verizon signal and were able to download our photos from yesterday.  It only took a 30 minute ride to Green Cove Springs.  Since we were going in that direction today it was really no big problem.  But before we get to today, let’s get caught up on what we did yesterday.

We had heard of a wonderful military museum in this area that we had missed when we were last here.  This time we were bound and determined to find it and visit it.  Since it only opened at noon time there was no big rush to get up and out yesterday.  Finally, though,  we got our act together and hit the road.

A right, then a left and we discovered what we were looking for.  First, Camp Blanding 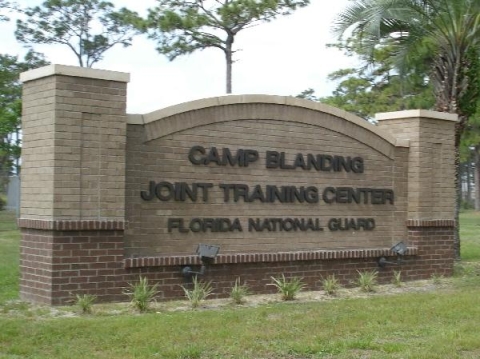 and right there at the entrance to the base we found our sought after museum building.

The Museum is housed in an old WWII 2 story barracks building.  It’s goal is simple: to

keep alive the legacy of Camp Blanding and to remind everyone today of the soldiers of yesterday who through their service and sacrifice made our present and future possible.

The museum details the history of Camp Blanding and is full of uniforms, medals, weapons, equipment and historical artifacts from WWII to Desert Storm.  That is what is inside.  Outside there is the History Trail which we’ll get to in a bit.

Camp Blanding has had an interesting history. It was originally designated as a Naval Air Station in the later part of the 1930’s because it is located on Lake Kingsley. The site the Navy really wanted was on the St. James River in Jacksonville, but the land was already designated for the Florida National Guard use. The two forces engaged in talks and a land-swap was arranged.  The Navy obtained its site of the St. James River and the National Guard was given 30,000 acres on Lake Kingsley in Clay County, Florida.

At that time the National Guard Officers Association of Florida recommended the camp be named in honor of Lieutenant General Albert H. Blanding.  Blanding was a Florida native who commanded the 2nd Florida Brigade during the Mexican Border War in 1916-17.

In 1940 with the winds of war blowing the regular Army leased Camp Blanding as a training center.  Construction began immediately to enlarge the facility.

It became an induction center for soldiers and an infantry replacement training center.

I’ll be honest with you, standing and looking at these pictures sure brought back

memories.  Flashbacks of my basic training in Fort Benning, Georgia flooded through my mind.  For several minutes I just could not move.  You knew from the moment you stepped off the bus that life was going to be REAL different.  They started yelling in your face from the moment you arrived.  Then there was the HAIRCUT when it all went.  Oh yea, your old life was completely gone.  What in the world had I volunteered for!

During the early 40’s dozens and dozens of army formations comprising hundreds of thousands of troops trained at Camp Blanding. Included were formations of Infantry, Cavalry, Tank Destroyer, Field Artillery, Engineer, Medical and other specialist troops.

The Camp was also a German prisoner of war detainee camp that held 2000 Germans.

This is a model of the prisoner of war camp.

During World War II Camp Blanding had grown so much it was equal in size to the fourth largest city in Florida and was one of the largest training centers in the United States. The original 30,000 acres was now 170.000.  There were 10,000 buildings and 125 miles of paved roads.  It operated a bus transportation system, railroad dept, equipment and supply storage facilities, housing, water, sewer and electric utility operations, military police, service clubs, theaters, guest housing, post exchanges, and mess halls for feeding almost 1 million people.  In addition it had the largest hospital in the state and operated numerous health clinics.

This is typical billet on base.

Each barracks had central heating, a pot belly stove in the middle of the building!

Each recruit was issued a rifle to train with.  Of course it was fake, make of wood, and they had to pretend to fire it by shouting BANG!

There were so many other displays, too numerous to list and show but here are a few.

In honor of Medics who served during the WW II

Cartoons created during the WW II

In honor of those who received the Medal of Honor.

Moving outside, we walked the History Trail and discovered numerous monuments

Medal of Honor and the list of those of Camp Blandings nine divisions who received our countries highest honor.

On display also were Jeeps, cannon, armored trucks, and an ambulance to name just a few vehicles

Then there was this, one of only four known to exist in the US today.  This is an original mile marker that once lined the road leading inland from Normandy Beach.

There is of course so much more but time and space does not permit including it all.  Perhaps military history is not your cup of tea but I believe everyone at one time or another should visit a museum such as this.  Why?  To see, learn, and remember that our freedom is not really free.  This museum helps us to remember that the lives of freedom we live today are due to the service and sacrifice of so many who have gone before us.

That was our day yesterday on The Road of Retirement.  It was a fascinating day full of new discoveries.  A day that helped us to remember that we are free to live the lifestyle we do, we are free to roam this great country because of the service and sacrifice of so many who have gone before us.  We will never forget them.

Thanks for joining us.  We hoped you enjoyed the tour and perhaps even learned something new along the way.  Join us again tomorrow as we hopefully will get caught up with what we did today.  Till then, have a great night.

One thought on “TOUR AMERICA 2019: NORTH CENTRAL RIDGE OF FLORIDA”