Home Is Where We Park It:  Stagecoach RV Park

One down, two more to go.  Days in Saint Augustine that is.  We had a full day yesterday and today promised to be just like yesterday.  The nice thing, though, there was no need to rush into the day.  Nothing in the city was likely to disappear if we didn’t get there exactly at 9 am.  Thus we took our time getting up and having breakfast.  This approach set the tone for the rest of the day, slow and steady wins the race, or in this case makes for a much more enjoyable day of sight-seeing.

In due time we went to the office and had them place a call for the shuttle bus to come and pick us up.  I’m really enjoying this.  I don’t have to worry about driving, finding my way around, not even a place to park.  As the old Greyhound ad used to say leave the driving to us and so we left the driving to the Old Trolley Shuttle bus drivers.

Let’s get going.  We’re going to back to yesterday’s travels and we’re going to share with you another place we visited.  It is The Oldest Store Museum Experience. 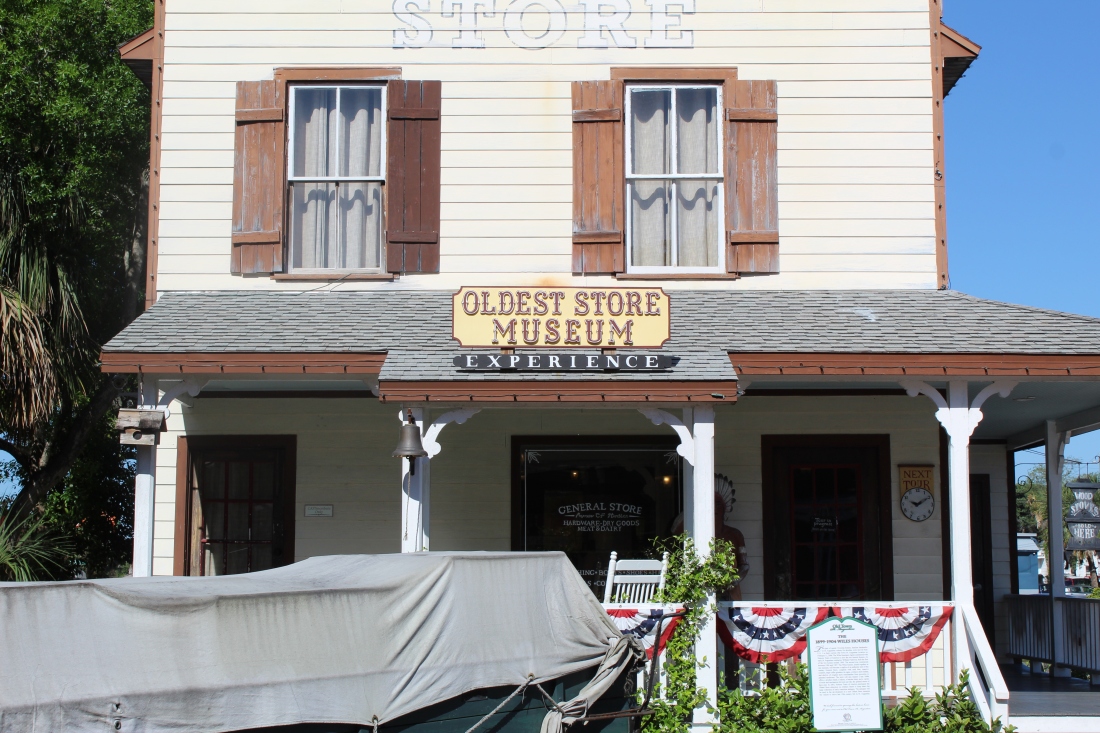 This store is arranged to look and feel like it did in the late 1800’s when C.F. Hamblen first opened this popular business.  Exploring the extensive collection of authentic products within these four walls is like stepping into a Sears and Roebuck catalog from the early 20th century.

Live actors acting as clerks and Snake Oil Salesman will try to sell you just about everything and anything.  For instance, this fine clerk began our tour by trying to sell us the elixir of life, this small bottle was guaranteed to fix all that bothers you for a small price of just $20! 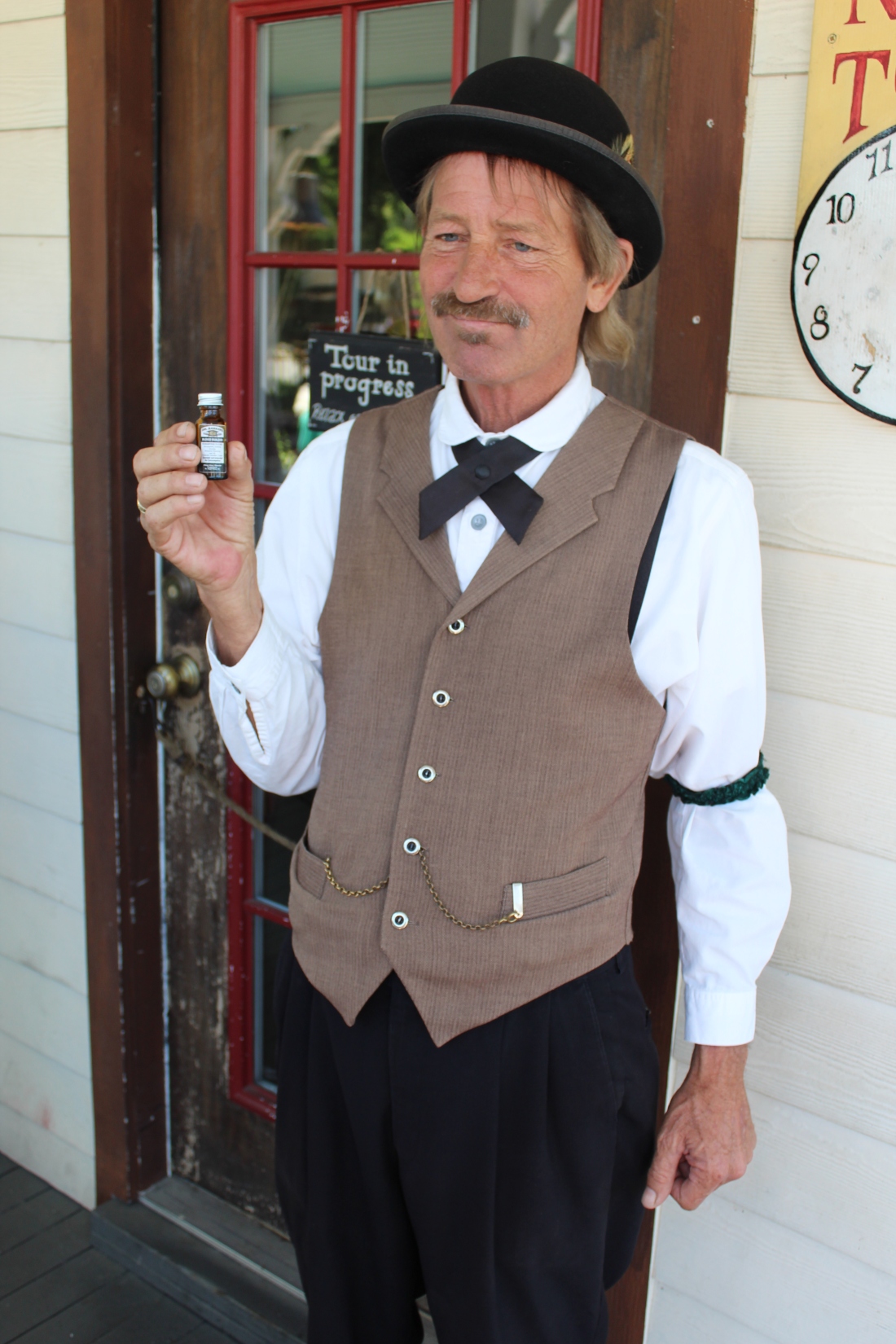 Let’s go inside and have a look around.  This is the sales counter with products behind.  How about that talking machine.

Here’s a better picture of it.  Trying putting this into the dash of your RV!

Down below the counter where containers of all kinds of beans.

I never could get a straight answer as to what Turtle Beans, or Zipper Cream Southern Peas, or Kentucky Wonder Beans were or what they would be used in.

Here’s another display case with all kinds of wonder-working elixirs.  Take a look at that cute little baby’s face on the Chill Tonic.  That face alone sent chills down my spine! This tonic was for the relief of malaria and resulting chills and fever.  One individual said of this elixir:  Somehow I got to remembering patented medicines my siblings and I had to take as children. Chill Tonic was one and we had to take it for about a week in the spring. It had little gray flecks of something floating around in a thin gray liquid. I could tolerate it but my poor brother would almost faint when it was his turn to down the big spoonful

Then in the upper right corner is Milk of Magnesia Tooth Paste.  In the lower left is Wamp Root whatever that is.  Finally,  in the middle check out the Worm Syrup.

Look closely and you’ll note that you have to buy all three bottles of the Worm Syrup just to get a full set of instructions on how to use it.  Now what exactly is Worm Syrup?  Worm syrup was a patent medicine sold in glass bottles. The concoctions were intended to get rid of parasitic worms. Kids used to get a dose of it before the beginning of each school year. 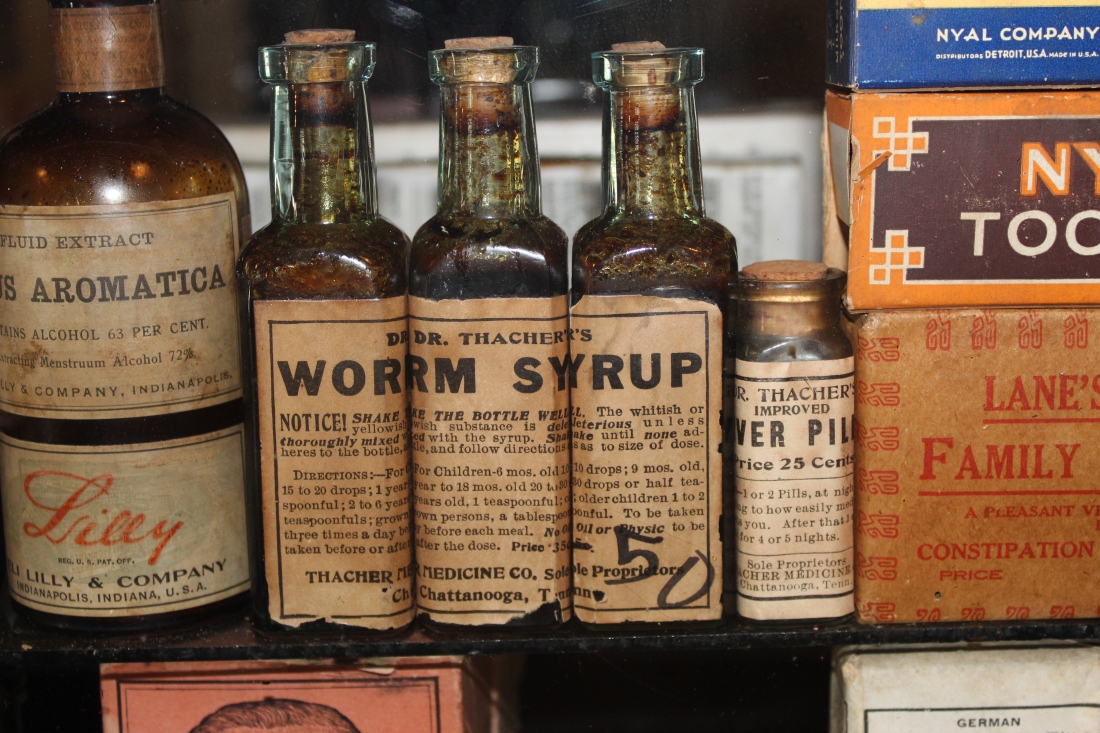 Want a cup of coffee?  First, you’ll have to grind your own beans.  Here’s just the ticket, guaranteed to give you enough ground coffee for more than one cup.

Having trouble eating corn on the cob?  Maybe you want to can some corn.  This is just what you want to buy. 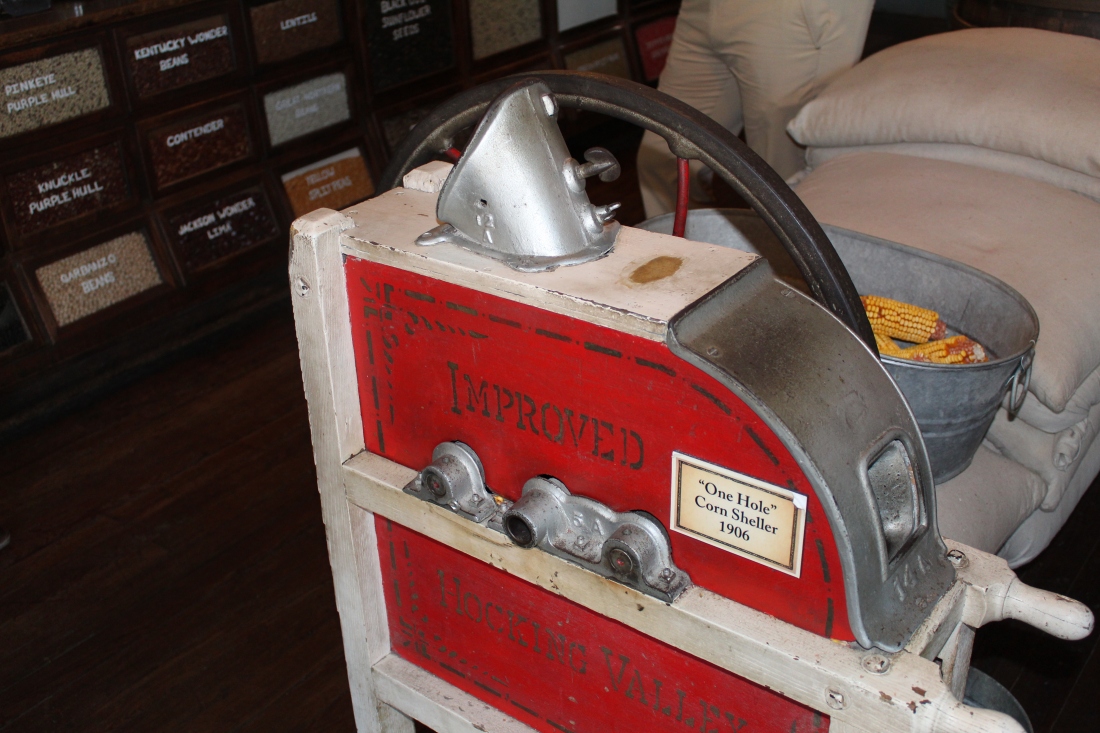 Moving on through the rest of the store can anyone remember when meat went for these prices?  I sure can’t.

An early vacuum machine.  One problem, it only picked up dirt when pushed forward but not when you pulled it back.  Guess it needs a bit of refinement. 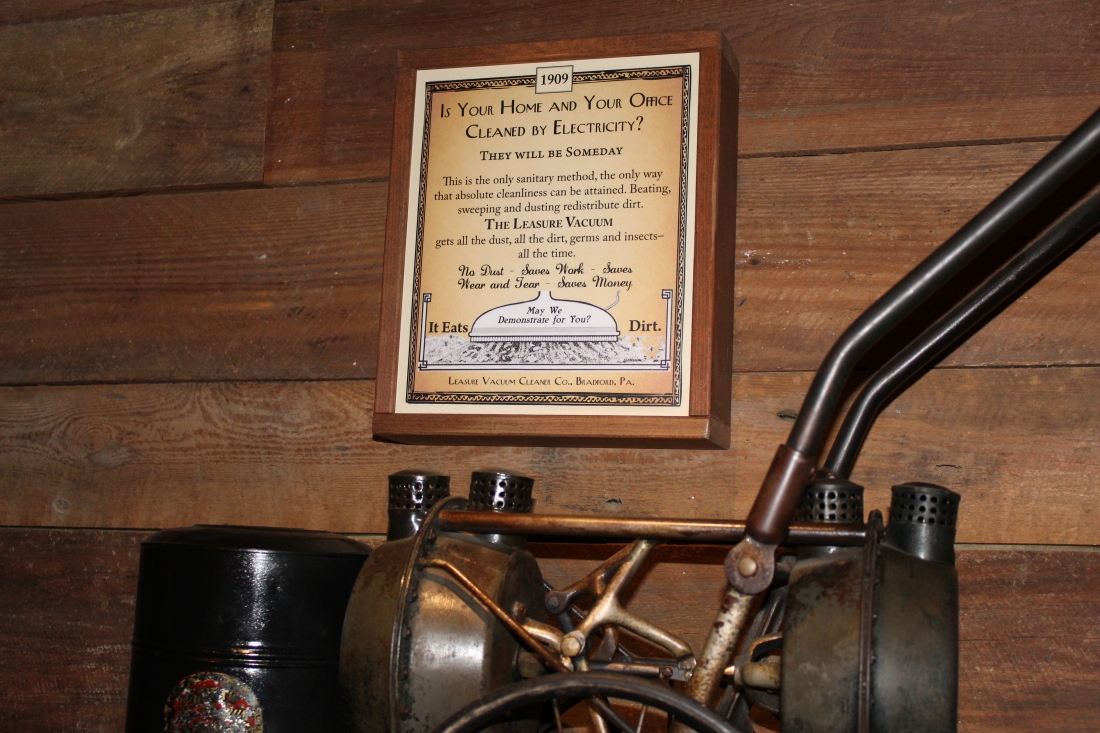 Here’s an early Maytag washing machine.  No electric where you live?  Not an issue it was powered by a one cylinder gas engine.  Didn’t last long because the fumes tended to make the woman using it sick.  Oh well, seemed like a good idea at first.

Trust me this place was full of just about everything from tonics and elixirs to vintage early sewing machines,

and a horse powered grain thresher.

Then there was this, a bike that I have no idea how anyone could ride.  Yes, the small wheel is in the front.  Yes, more people broke bones riding this contraption.  No, this is definitely not the kind of bike that I am looking for. 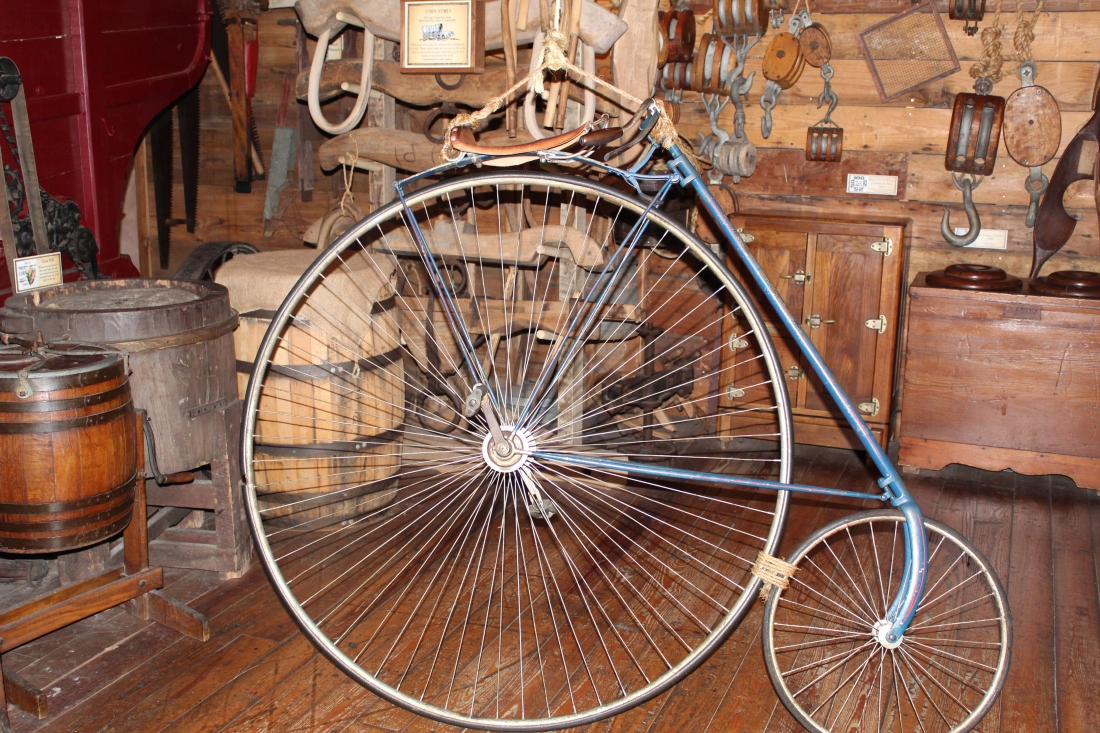 When we first considered going through this museum it looked like a silly tourist trap, but we were impressed by the antiques of old and how they worked to improved lives- and the fun, dramatic explanations of the docents who were dressed in costumes of the day made it that much better.  There’s so much more in this museum but I just don’t have room to include all the pictures I took.  Trust me it was a fascinating place to visit and we’re glad we had the chance to do so.

We visited a number of other attractions yesterday but after two days of sightseeing I’m bushed and just not up to typing anymore.  Trust me, I’ll get caught up in the next couple of days and let you see all that we saw.  We’ll visit the Fountain of Youth, the Pirate Museum, Ripley’s Believe It or Not, The Distillery, and The Castillo.

That was our day on The Road of Retirement.  Another full day, another day we did it our way, traveling along, hand in hand, singing our song.  Oh, and climbing once again up and down all kinds of stairs.  We’re tired, but it’s a good tired.   Most of all we are so thankful to the good Lord that we are able to do all that we do.  A year ago neither of us could have walked this much.  Does it hurt?  Yup, but so what as they say a few aches and pains  let you know that you are alive.  Tonight, we can attest to the fact that we are very much alive!

Thanks for coming along again.  Join us again tomorrow as we go at it again.  Till then have a good night.