Home Is Where We Park It:  Stagecoach RV Park

About that pool.  And lunch.  And the piano.  All in due time.  Let me begin by saying we have had three absolutely fantastic days in Saint Augustine.  The weather has been picture perfect.  The temperature was always in the high 70’s and the low 80’s.  There was always a light breeze blowing.  Brilliant sunshine.  What more could one ask for?

Well, how about the people we met.  We’ve met and talked with people from all walks of life.  There was the couple from Canada that spoke only a bit of English.  If you spoke real slow they were alright.  Barbara jumped in and helped them out.  Went with them to the ticket office to sort of interpret.  Shared a bit about the trolley tour.  Even escorted them to one of the attractions at the trolley depot.  Then there was the woman from Wisconsin whose husband was in Saint Augustine working.  She was left to see the sights on her own.  We had a delightful conversation with her.  There were so many others from all walks of life.  Every one open and willing to take a few minutes to just strike up a conversation.  Including this young man who we bumped into today.  He is a freshman at Falgler college looking to major in Graphic Design.  We discovered him sketching the fort 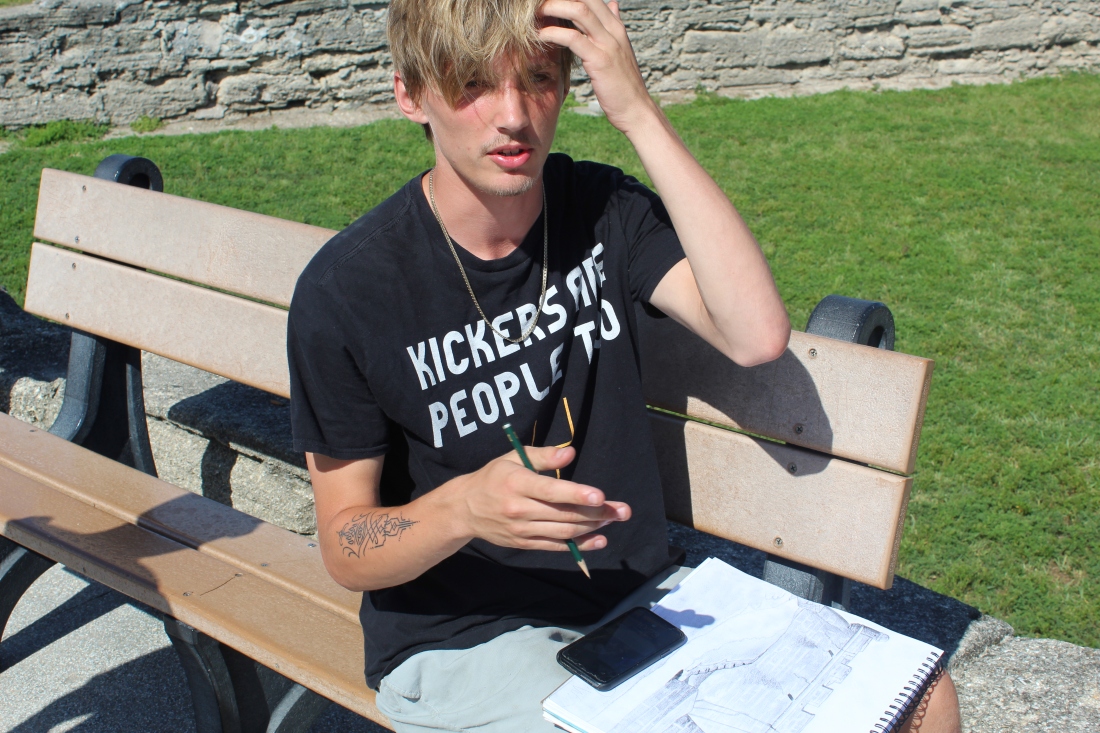 and the harbor and the draw bridge across it.

We spent several minutes with him then wished him well in his studies and moved on.

Let’s not forget the employees of the Old Town Trolley Company.  Like Tony.

There were others – Bud, Bill, Linda, JP, Davey Jones, Greg and so many more. Wow, what

a wonderful bunch.  They couldn’t do enough for you.  Every one to a person spoke highly of the company and we’re quick to add how proud they were to be working for them.  Asking questions and digging a bit I discovered that a Trolley Tour Bus driver is required to know a script that covers 100 points regarding Saint Augustine.

They are also tested on a regular basis regarding the script and must obtain a passing grade of 96 to be certified as a tour guide.  Failing to do so puts them back in training.  If they go away on vacation and come back they must be re-certified again before they can again serve in a tour capacity.  You can be sure when in Nashville we’ll take their tour.

This property was once home to the Timucuan Indians.

This is a reconstruction of a typical Timucuan hut that would have provided shelter for two to four individuals. 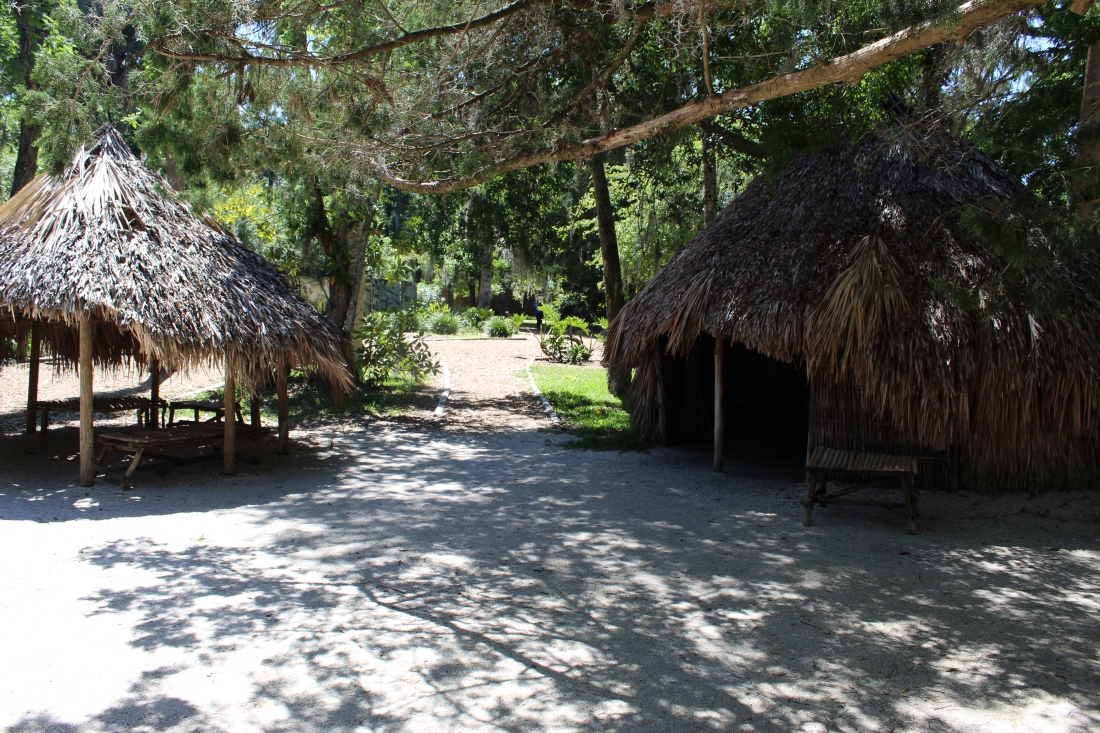 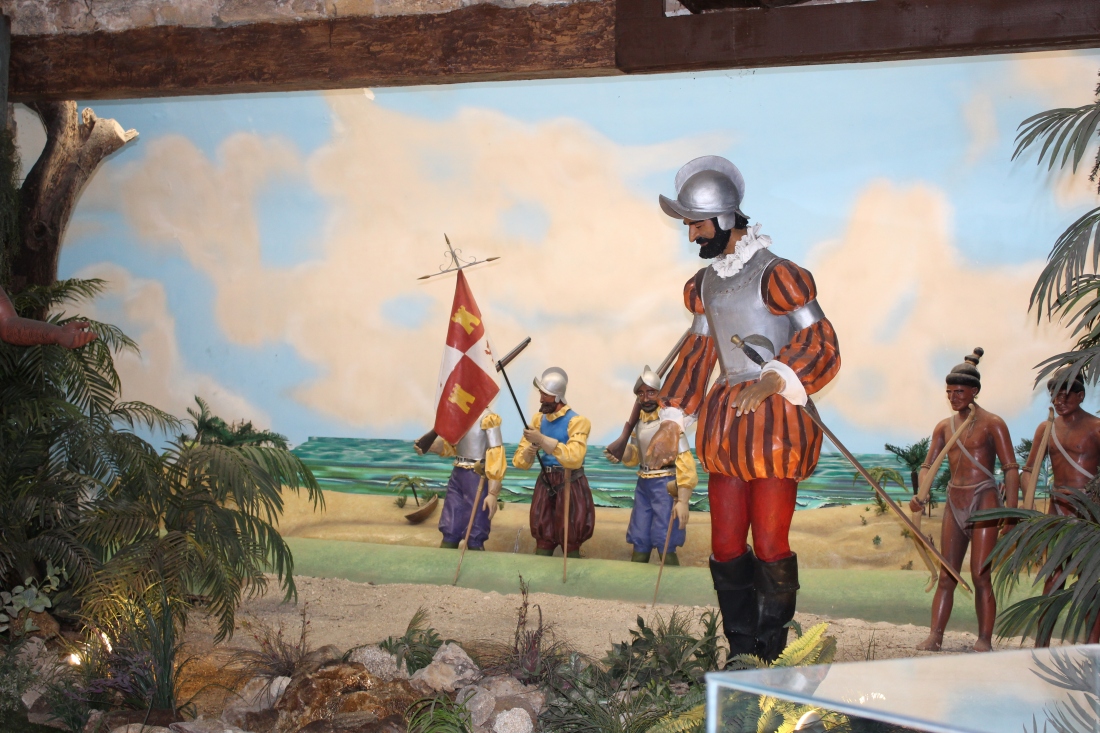 arrived in Florida.  Natives had told him of a fountain to the north that had the ability to grant eternal youth.

He had his turn now it was mine!  I told Barbara to stand back because after a sip I was sure I would be doing cartwheels.  No such luck.  I wondered why and that’s when I discovered that if sipping doesn’t work then you are supposed to strip and bath in its waters.  Like that was going to happen.  So I’m still the same old guy with two creaky knees.  Oh well I tried.

Saint Augustine in this field, establishing what was to become the oldest continuously inhabited European settlement in the United States.  The first settlement is in the process of being recreated on this field. 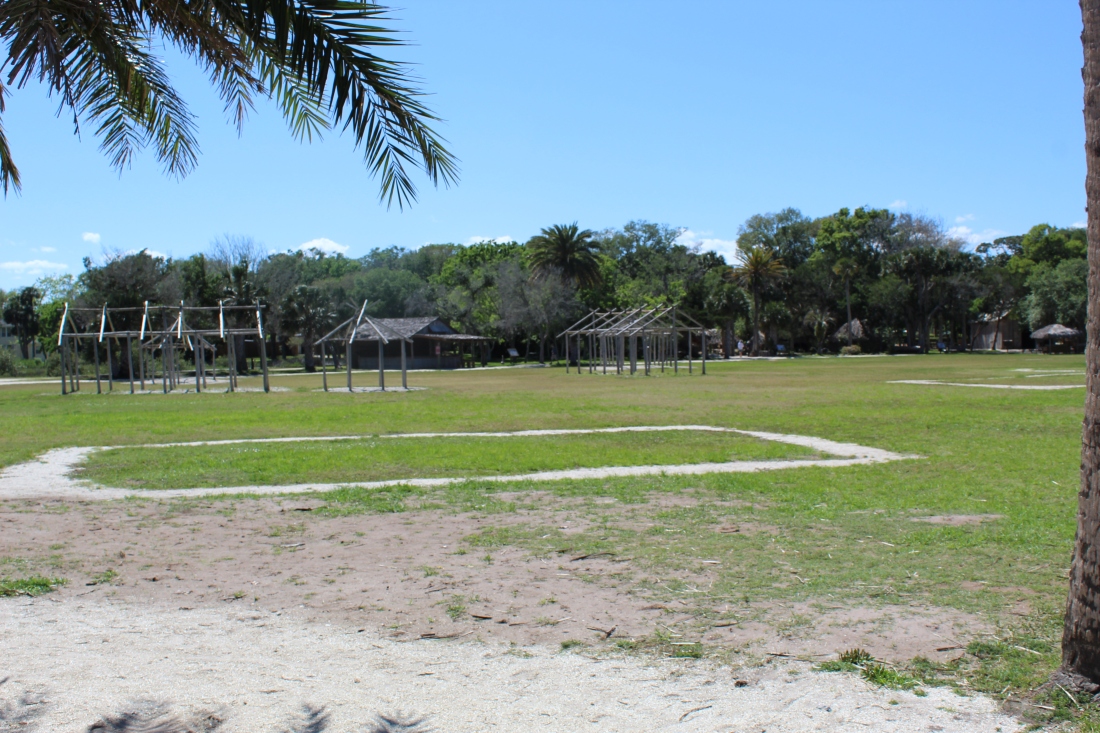 There is so much more to see here, we spent over two hours roaming the grounds.  My advice, make the time to visit this fantastic piece of history.  Before we leave, though, here are some pictures of some of God’s beautiful birds that roam the grounds. 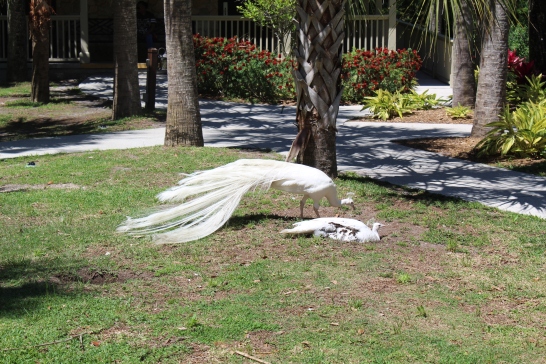 We discovered that they will lose their tail feathers by June but within a month or two they will grow back.  As to why they are lying on the ground, they dig holes in order to find a cool spot in the dirt.

Now about that pool.  Leaving here we are going to the Alcazar Hotel which was built by

Henry Flagler shortly after he built the Ponce de Leon (in a future blog).  It remained the center of social life until it’s closing in 1931.  The two hotels were directly across the street from each other.

The courtyard in front.

Flagler built this hotel to provide informal entertainment to the guests who were staying in his other hotel across the street.  He built Turkish and Russian baths, a bowling alley, 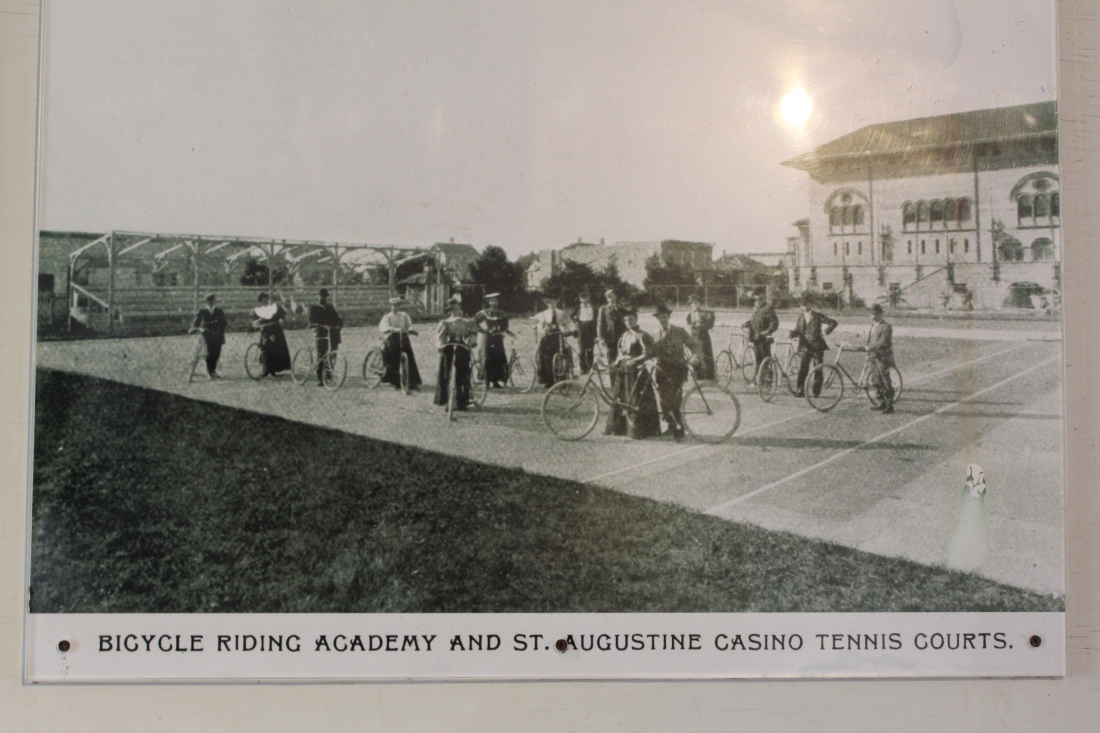 and then there was this 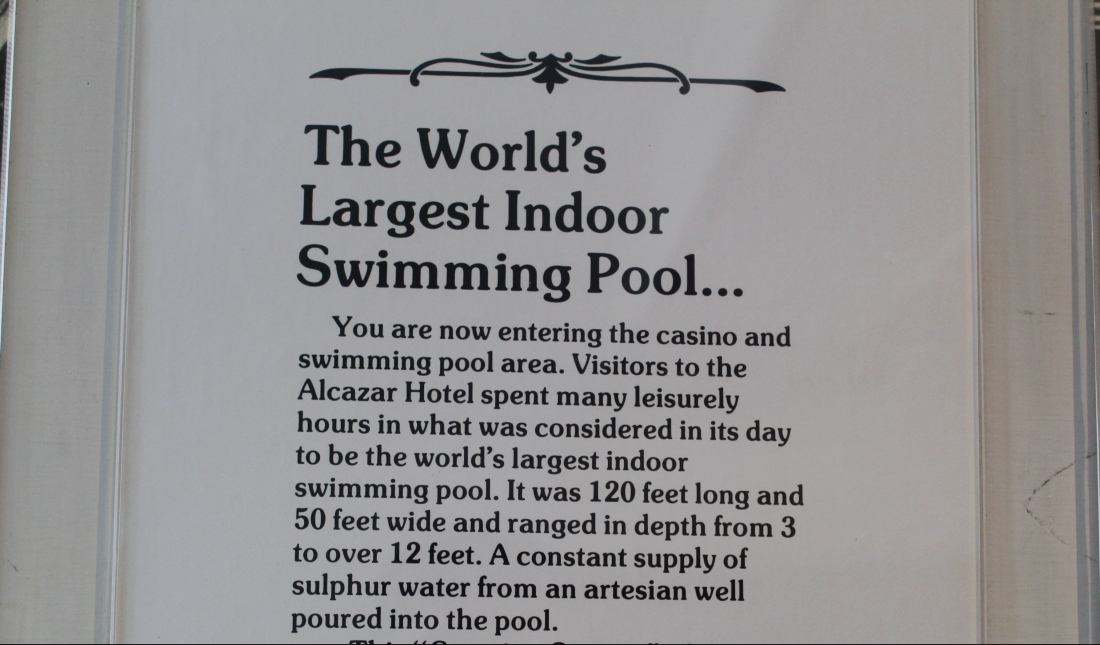 With two floors above it, the third floor being the location of the ballroom band and the center open top to bottom, guests could go for a swim while listening to the waltz. 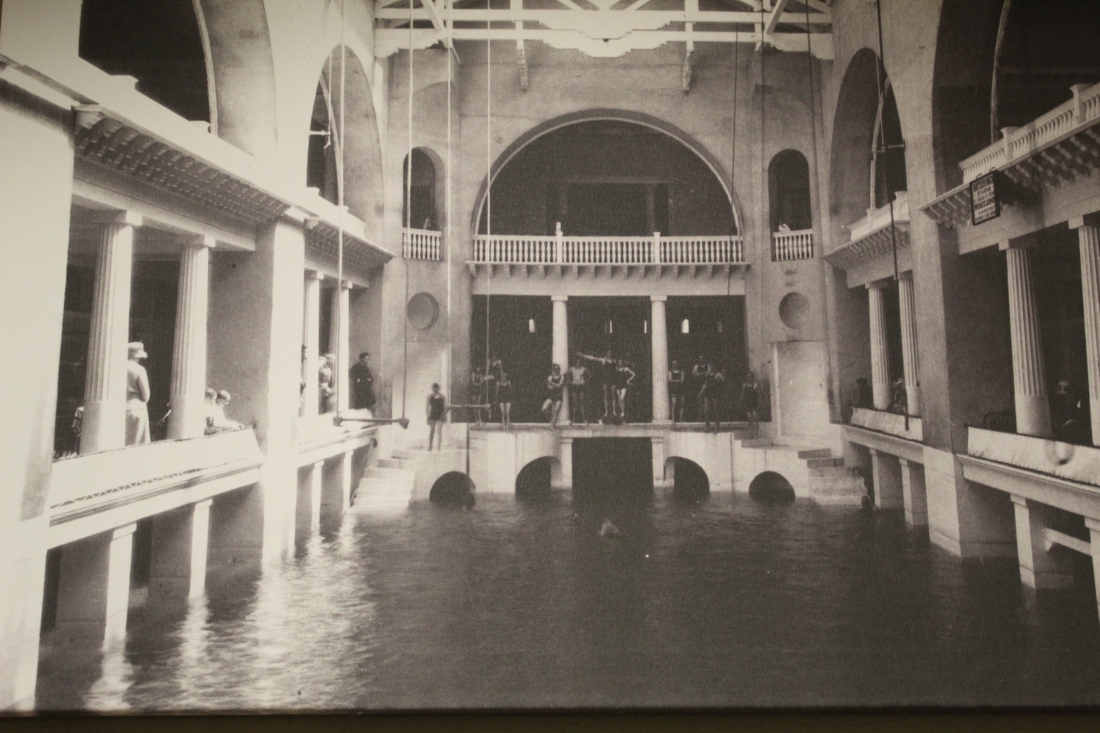 Today the pool is  empty and it has been converted into

which is set up in the former deep end of the pool (wave Hi to Barbara, she is to the right in the green shirt) 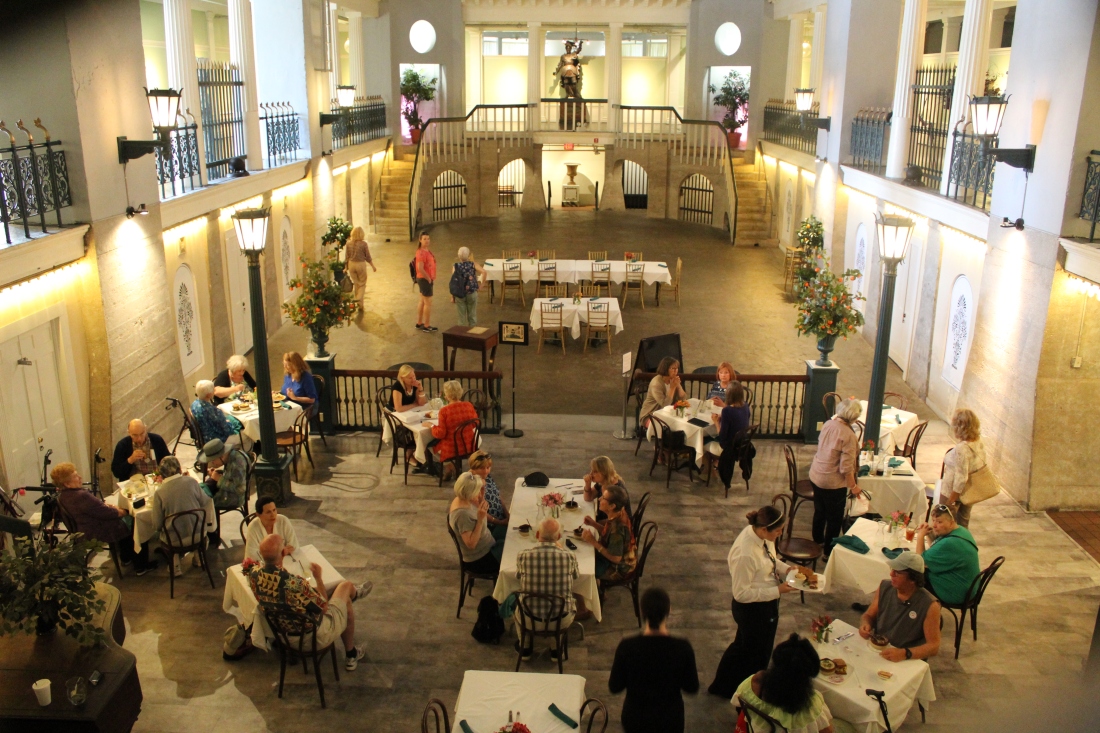 Yes, there is even a piano player who provides music during lunch!  How about that window to the left. 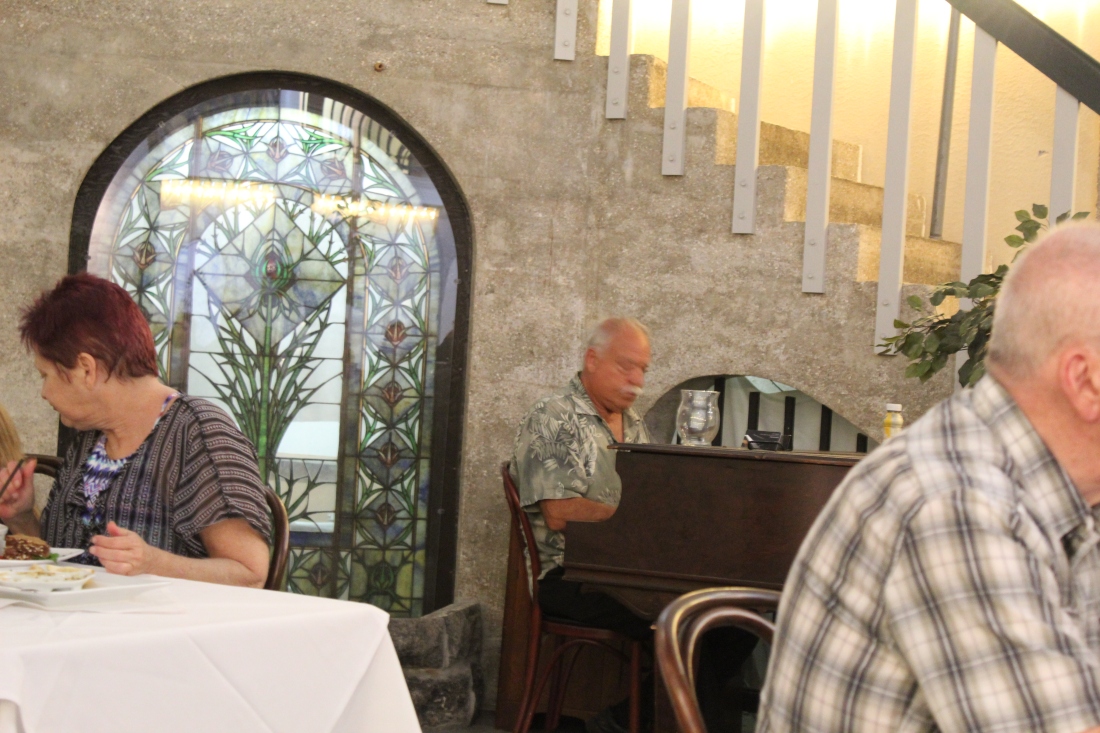 As for lunch, a delicious Cuban sandwich for each of us with unlimited drinks.

It sure wasn’t McDonald’s and probably stretched the budget a bit, but how often do you get to have lunch in a swimming pool while listening to the beautiful notes of a piano.

We’ve still got a long way to go to get caught up in terms of all that we’ve done and seen during the last three days.  However, it’s getting late and I’m dead tired after three days of walking and climbing all kinds of stairs.  Funny, we always seem to be able to find places that have lots of stairs.  I wonder why that is.

That was our day today on The Day of Retirement.  Once again it was a full day.  Funny about that, we left around 9 am saying to each other Oh we’ll be home no later than noon maybe 1 pm.  We finally got home at 4:30 pm.  No complaints.  We absolutely enjoyed every minute of the day.  Thank you good Lord for giving these two old duffers three wonderful days and the strength to see each through.

Once again thanks for joining us on our travels.  Stay tuned we have a lot more to see and show.  Time now to catch some shut-eye.  Tomorrow we’re home – I think especially since the weather is supposed to be so bad.