Well once again I awoke with the words of a song playing over and over again in my mind.  This time it was a simple song which we used to sing in church many years ago.  the words went like this:

Each day such a precious gift given to us to live to the fullest.  Today was no different.  A beautiful day that made one glad to be alive.  Abundant sunshine.  My friend, my wife, the one I love at my side.  What more could one ask for.  Thank you Lord for this day you’ve given us.

Time for breakfast.  Barbara as always is the gourmet breakfast chef.  Today it was scrambled egg, cheese, and ham on an onion roll.  Add a glass of orange juice and a couple of cups of coffee and breakfast was complete.  Complete, and very, very good.

Breakfast over and time to get going.  Today we’re going to finish our tour of the Battleship Alabama.  We’re going to do all three tours so I hope you have your walking 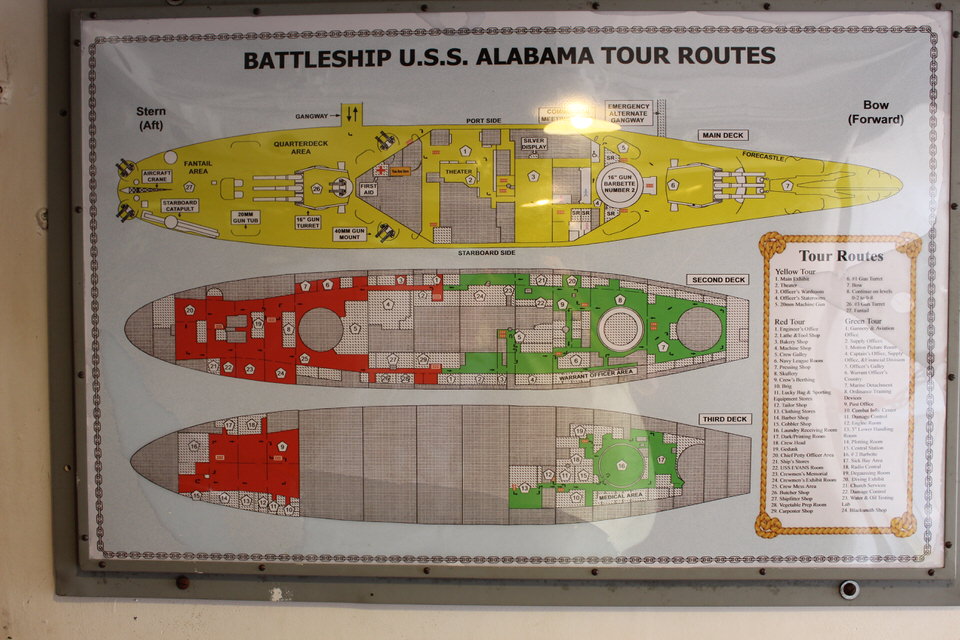 shoes on and you’re ready to go climbing up and down a whole bunch of ladders.  We’re going to start with the main deck, go up four decks, back down to the main deck, and then down five decks into the belly of the ship.  Lets’s go onboard.

First stop and we’re looking back into the Captain’s Cabin.  This served as more of a ceremonial and entertainment space rather than as actual living quarters.

This is the Captain’s Sea Cabin.  At sea the Captain seldom if ever left the bridge.  Here he was immediately available day and night.  He rarely had more than a few hours of sleep without a call.

This is an officer’s stateroom.  Unlike the enlisted men who slept in one big area, officers enjoyed private or semi-private rooms.

In contrast this is where the enlisted men berthed.  No privacy at all.   Everyone just crammed into one big area.  Count me out I’ll keep my bed in Graybeard! 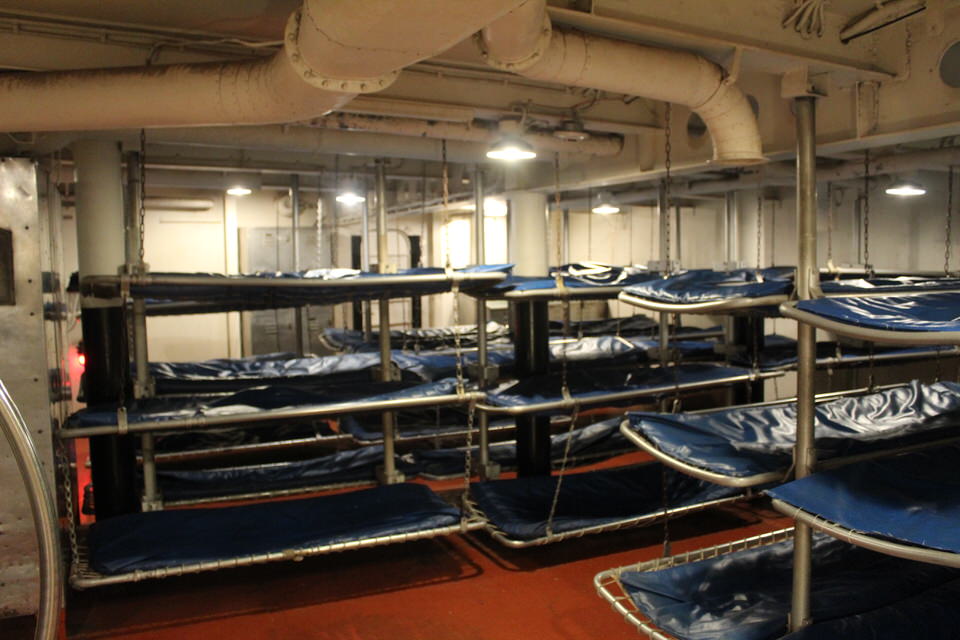 This is the Officers Galley.  Officers meals were served at 7 am. 12 noon and 5 pm.  In addition officers could request meals at any time so the galley was always abuzz 24 hours a day.  Furthermore, if an officer wanted a special meal and the supplies were available for it, it would be prepared. 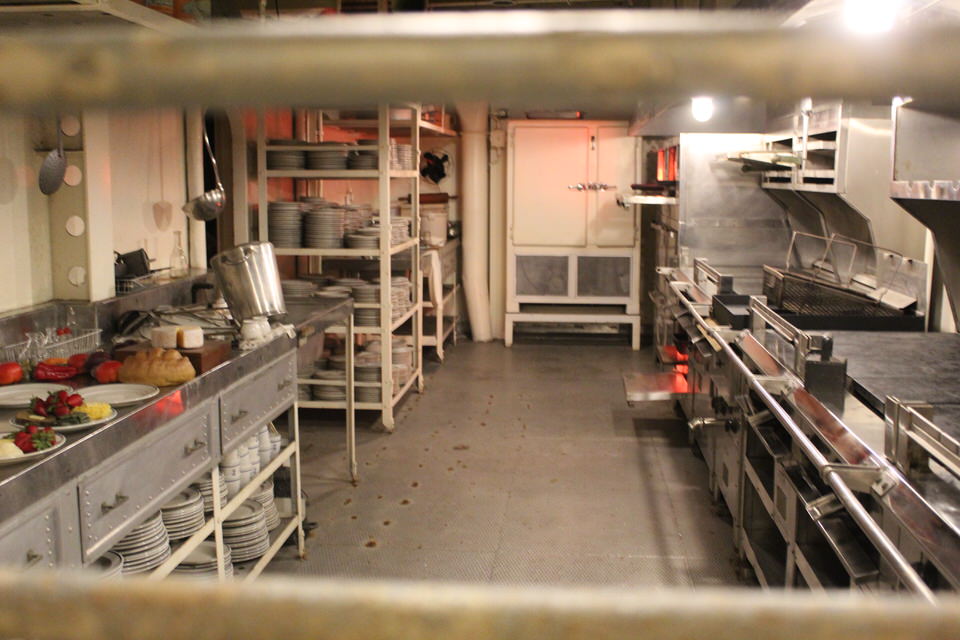 Officers meals would be served one level above in the Officers Wardroom.  A dumbwaiter ran between the two levels.

This is the Galley for the enlisted men.  Here each day hot meals were prepared for 2,500 men.  The cauldrons could contain coffee, stew, potatoes, beans or whatever.  Oh, they got what was prepared no special request allowed.

This is the mess area where the enlisted men ate.  At night the tables were folded up against the wall.  This area extended around the corner and kept going.  By now I was getting the district impression that there was a huge difference between the life of an officer and an enlisted man. 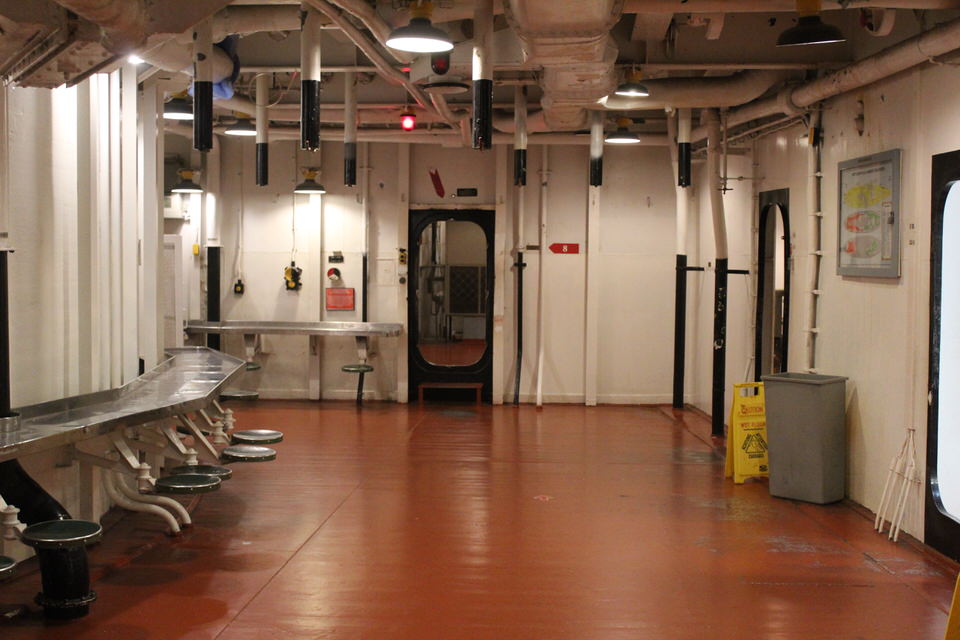 This is the Butcher Shop.  Meat was brought here from the storage locker, prepared and then delivered to either the officers or enlisted galley.

This is the ships soda fountain. 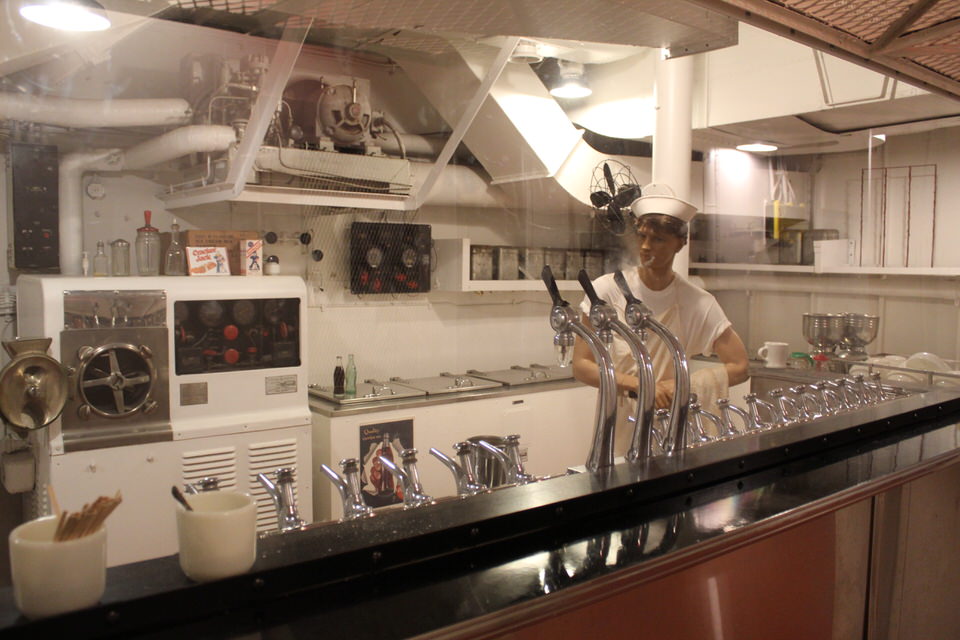 This is the Scullery.  After each meal every piece of mess gear was scalded in live steam and washed with soap and water.  This was a large factor in the excellent health of the crew.

This is the Laundry Room.  It was essential that men going into battle be in clean clothes to prevent infection in case of wounds. 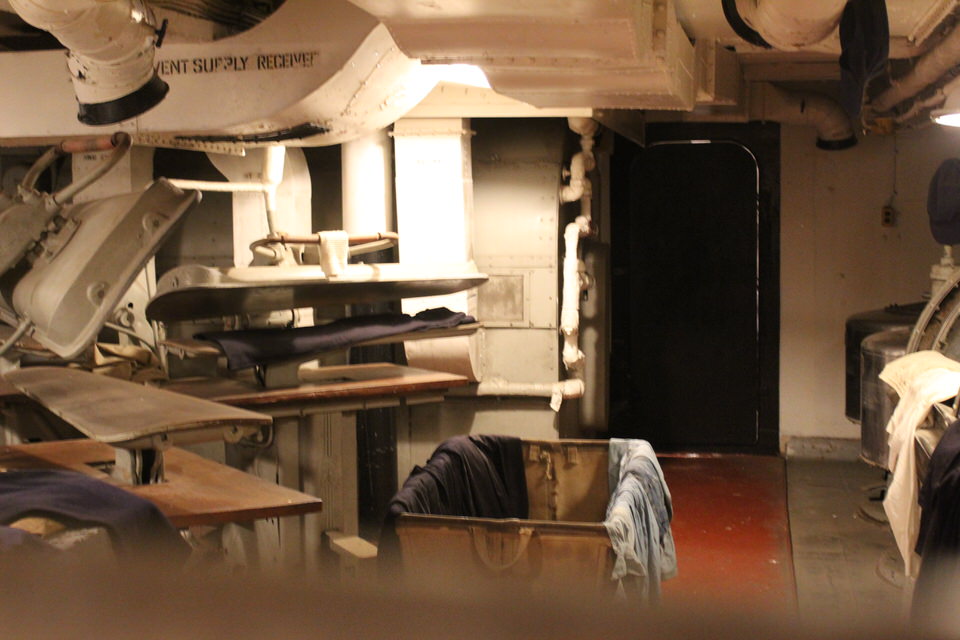 This is the Lucky Bag.  The number of men on the ship made it essential that each member of the crew keep their gear and clothing in their locker.  Articles found lying around lose were put into this room.  Anyone who had their stuff put into this room were subject to hours of extra duty.  Boy, would I be in trouble if this were the case onboard Graybeard! 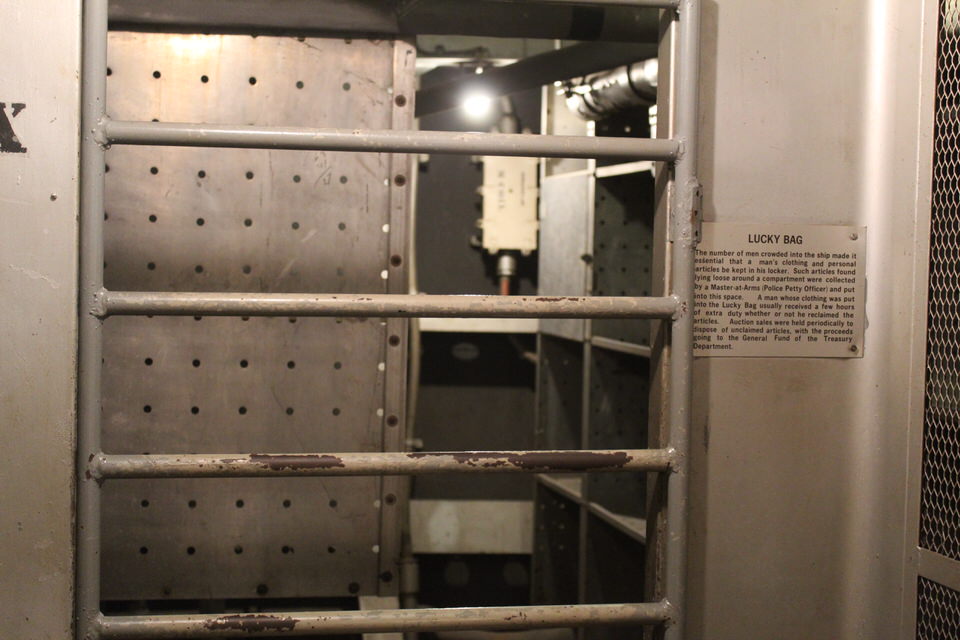 This is the Battle Bridge.  During an enemy attack the Captain commanded the ship from this location.  Here, he and his crew were protected by 18 inch thick armor plate. 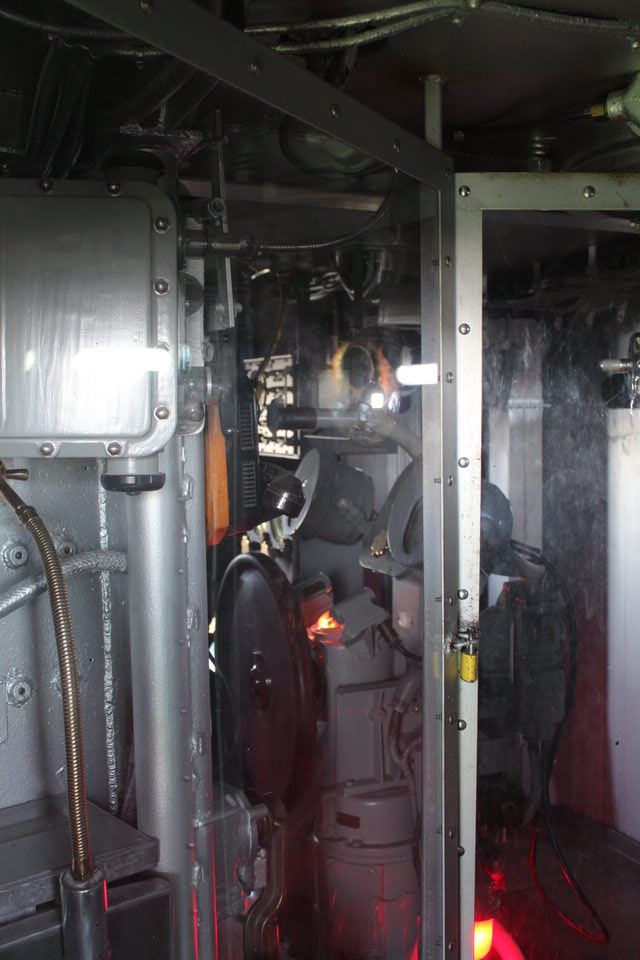 This is the Flag Pilot’s Office.  This was the Admiral’s combat intelligence gathering office.  It contains radar equipment, plotting tables and various forms of communication equipment.

This is The Combat Information Center.  All battle information funneled into this room.  Here it was analyzed and then sent to the Captain, the Flag Pilot, and other ships in the task force.

This is the Damage Control Station.  The Damage Control Officer had his station here.  He was responsible for the water-tightness of the ship and for evaluating and repairing all battle damage.

This is The Central Station. The ship could be controlled from this position.  There are communication facilities to every part of the ship.  This is the Executive Officers Battle Station.

This is the Machine Shop.  A ship thousands of miles from home port had to be capable of maintaining itself, and able to repair or make whatever part or piece of its machinery or armament was needed . 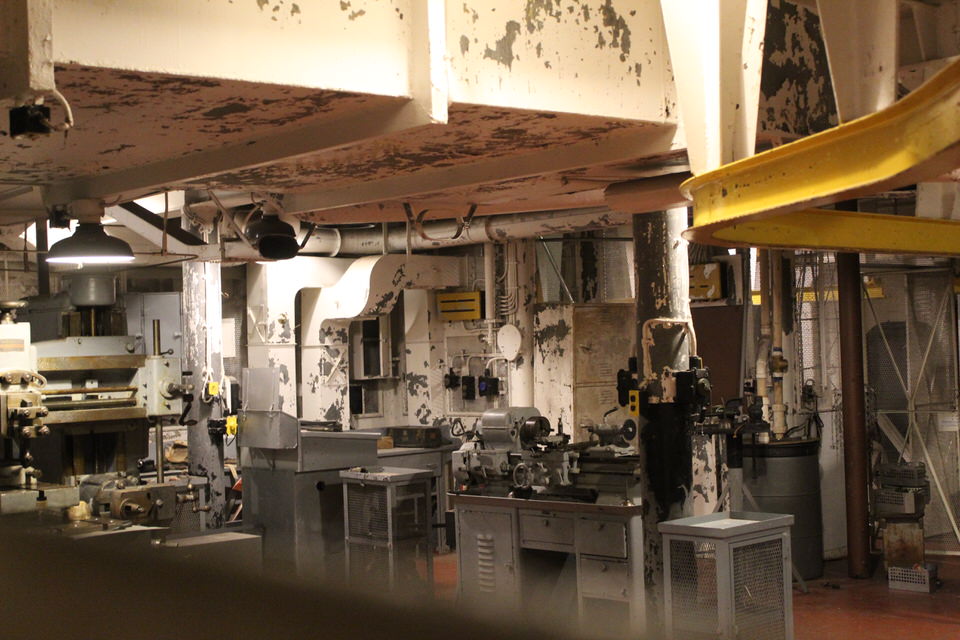 This is something I found most interesting. 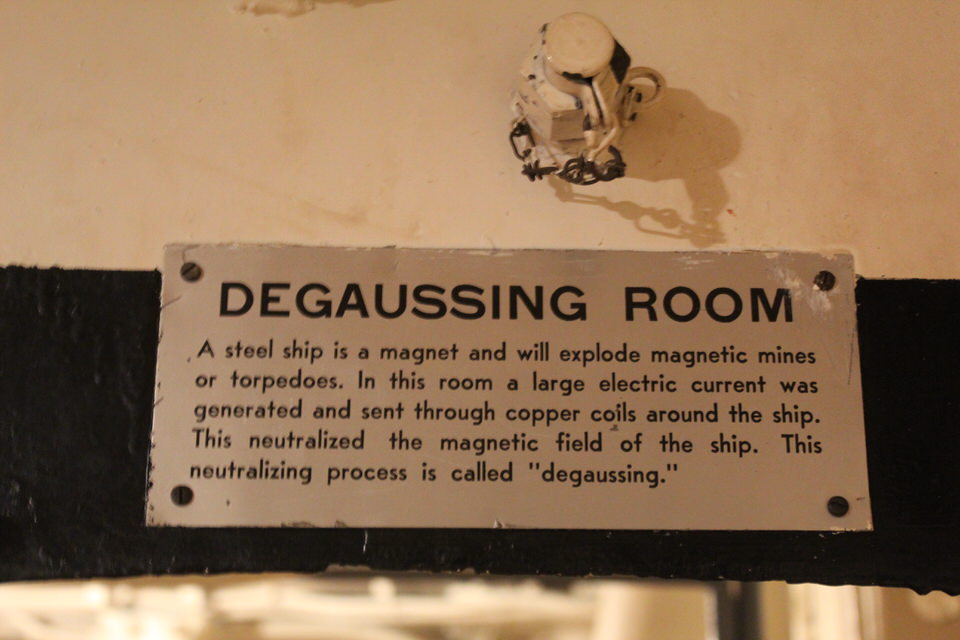 This is the engine room.  This is one of the spaces that I got lost in.  I finally spotted someone going up a ladder and so got myself out.  Whew, what a relief! 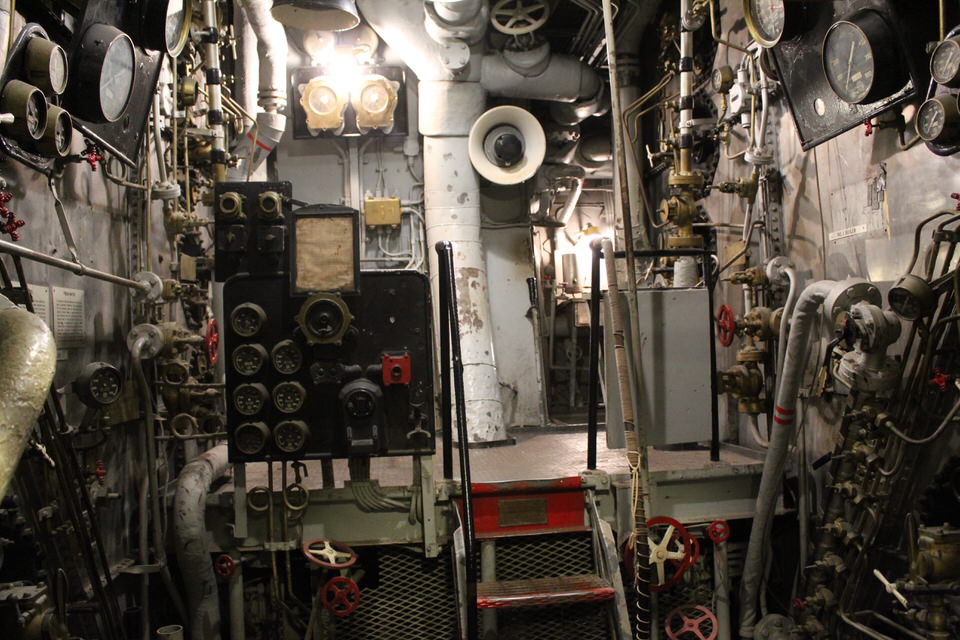 This is one of the ship’s propellers.

A few more odds and ends.

This is a Paravane.  This is a special type of water kite used to prevent the ship from striking a moored mine.  One was towed on each side of the ship.  It would move out to a certain distance and depth.  When it encountered a moored mine, the mine’s cable was severed by a cutter on the paravane, it then floated to the surface where it could be destroyed by gunfire.

Remember we said it was 194 feet to the top?  Unfortunately, you can no longer go all the way up since it is closed for restoration. 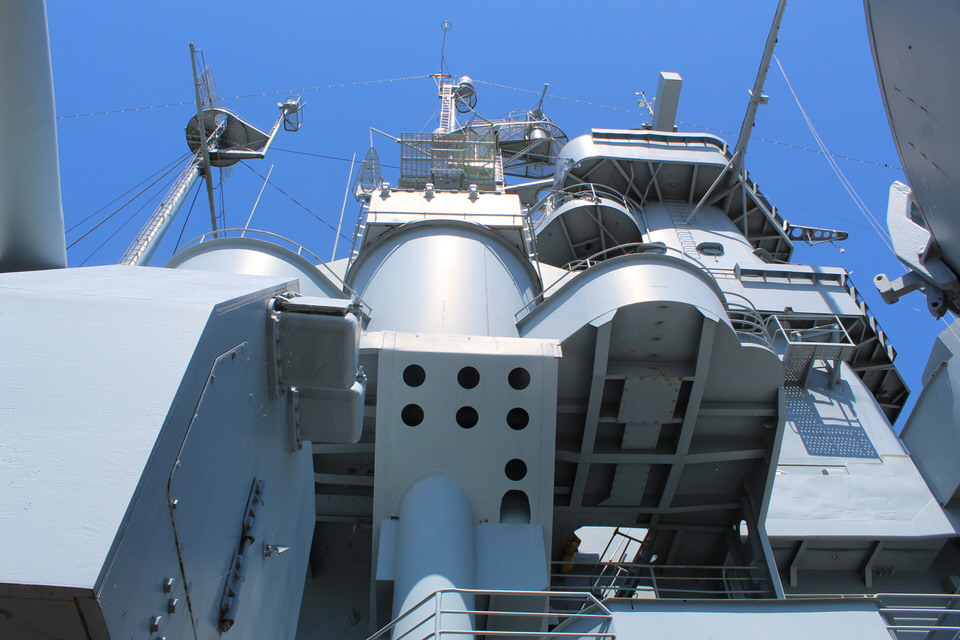 So that brings us to the end of our tour.  If you’ve never had a chance to visit the Lucky A put it on your bucket list of things to do.  A tour of this mighty ship brings home the sacrifices so many have made to ensure the freedoms we enjoy – and all too often take for granted.

That brings to an end our day on The Road of Retirement.  We had another delightful day out and about living life our way, traveling along, hand in hand, singing our song.  We have a lot more to share with you which hopefully we’ll be able to get to in the next couple of days.  Stay tuned there’s lots more to come.

Once again thanks for coming along with us, we enjoyed your company.  Till tomorrow.