We finally found a church to attend – and of course we are leaving this Friday.   Go figure.  This morning we went to the First Presbyterian Church in Foley.  Never in a million years did I ever figure there would be a Presbyterian Church in the deep south.  Come to find out there are 21 of them in the Mobile area.

We were the youngsters in the congregation.  No problem for us.  We were warmly greeted and absolutely enjoyed out time there this morning.   If we are ever back in this area on a Sunday we would attend again.

Ready to go sight-seeing?  We were in Foley yesterday and want to share with you what we discovered.  First up is the 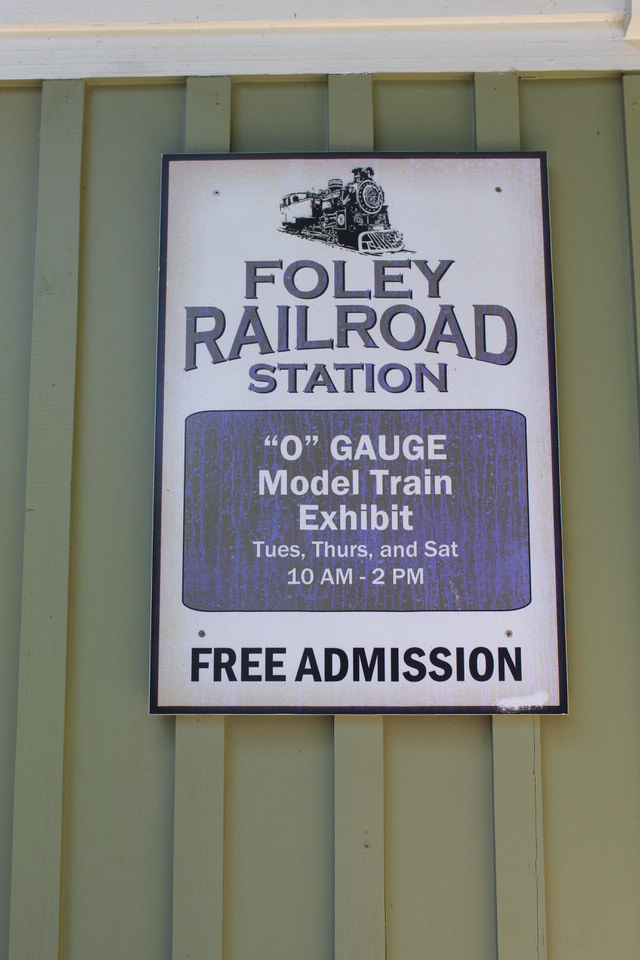 This exhibit once belonged to Alan Goldman who donated it to the town of Foley in 2004.  This exhibit is housed in an annex to the Railroad Museum and is 1,200 square feet in size.

This is the main display.  It consists of a quarter mile of track, three operating double-track routes, 12 different trains, and several animated sites. It also includes a model of the town of Foley with houses, office buildings, factories, restaurants, and even a drive-in movie theater, all made to represent Foley in the 1950s. Some of these structures were part of the Goldman donation, but others were constructed by the Foley Caboose Club either from kits or from scratch.

This is the far left end of the main display.

Underneath this section is a small display of a couple at the river.

This is the far right end, the trestles and mountain really caught my eye.  The attention to detail is awesome. 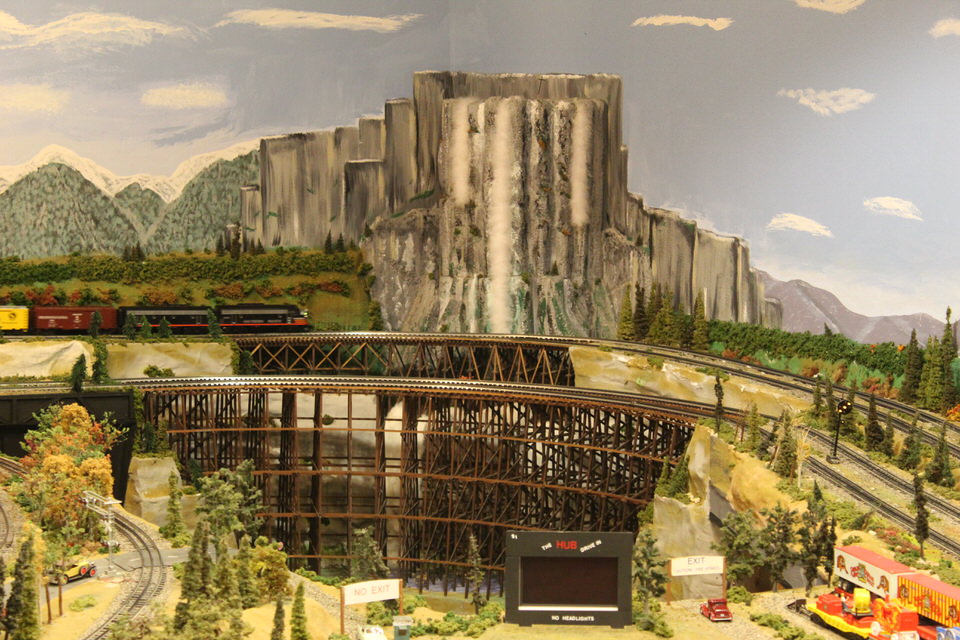 Let’s take a closer look at some of the displays.    The attention to detail in each is quickly apparent.   Someone went to a lot of effort to create authentic displays.

This is the local lumber company.  A rail car full of lumber as well as a truck coming to make a delivery.

The local Piggly Wiggly.  The sign actually lights up- it goes through each letter individually, then the the entire sign lights up.

The local car hop – at one time the cars and figures also moved.

The church.  I wonder what denomination?

Town Square.  Can you see the fountain in the middle? 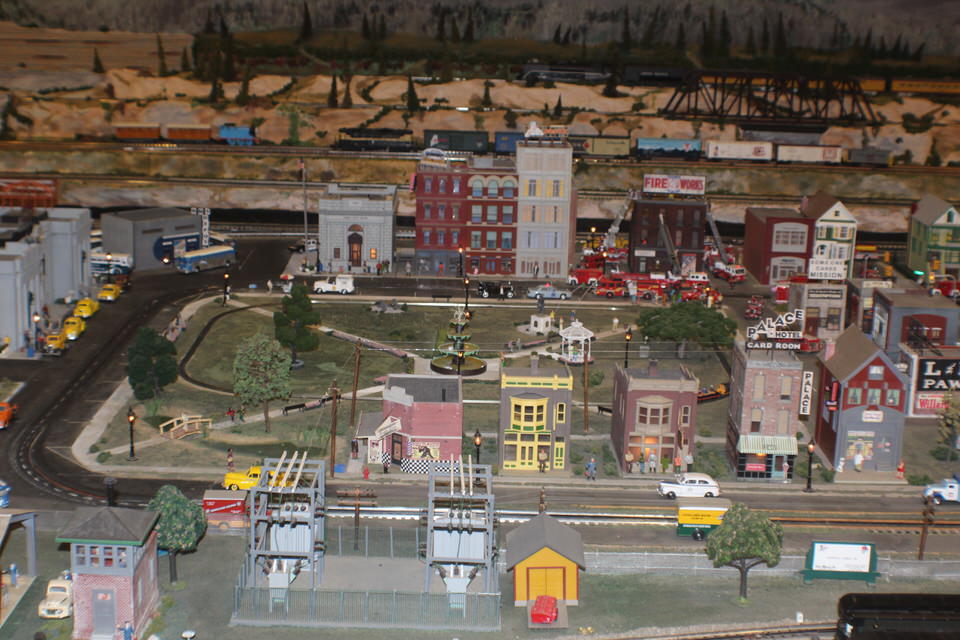 Union Railroad Station.  Cabs lined up at the curb waiting for passengers.  The bus depot is behind it. 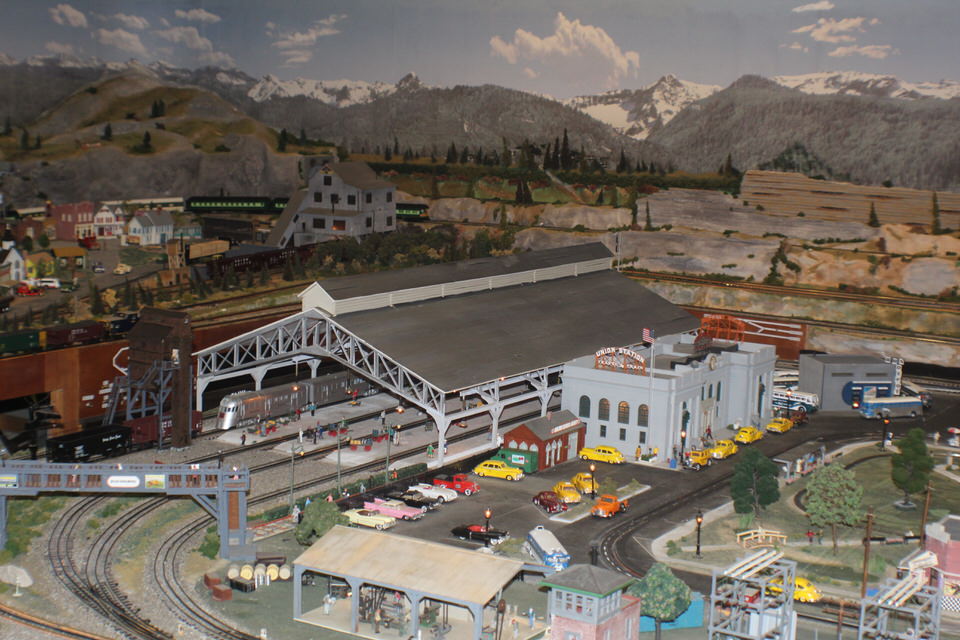 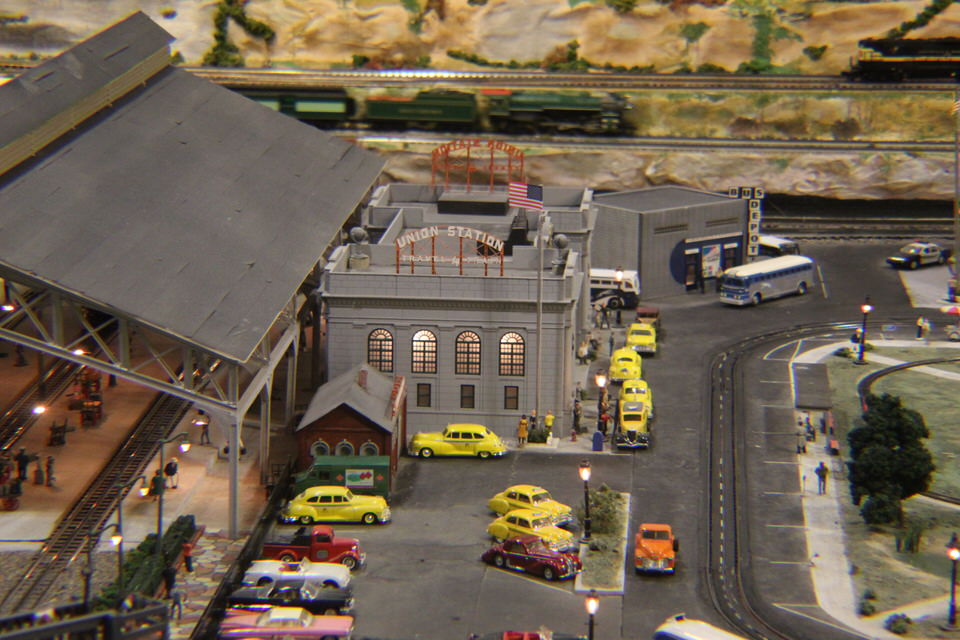 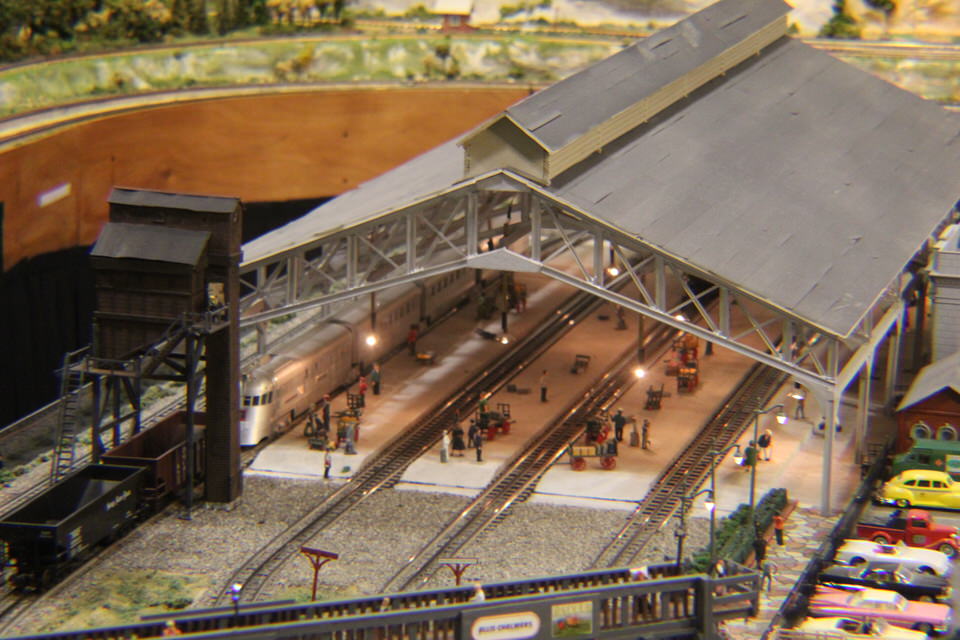 The Circus comes to town.  The wagons on display.

Behind the circus is the local Drive In theater.  There’s even a movie playing today! 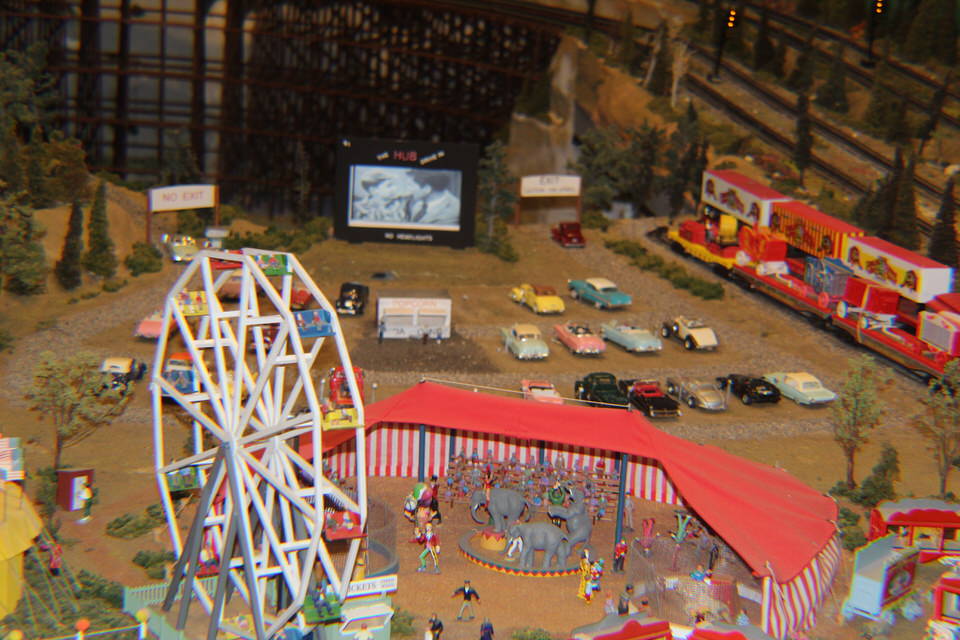 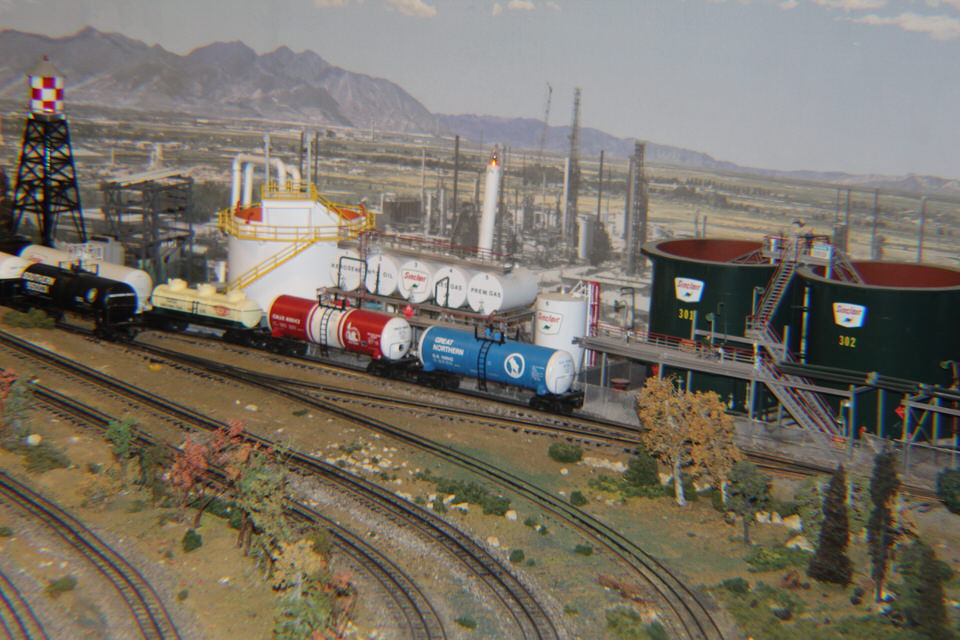 Then in the lobby we discovered this.  This is a scale model of a typical L & N locomotive.  This is an actual coal fired steam locomotive.  When fired it generates enough power to pull several adults. 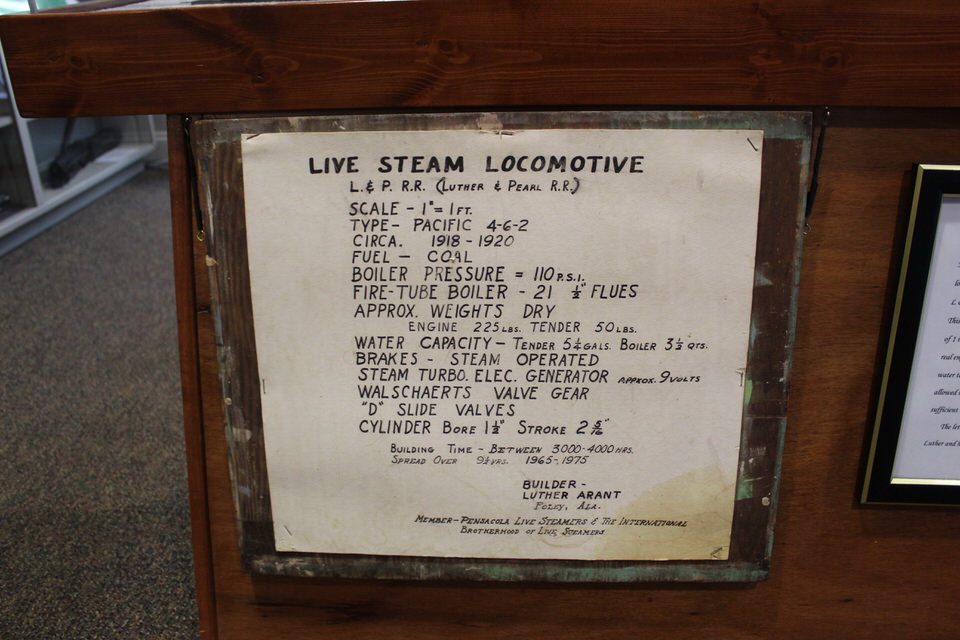 That concludes our tour of the Model Railroad Exhibit.  Hope you enjoyed it as much as we did.

But we’re not done.  It was lunch time and I had a hunger for fish. Off we went to

This is my kind of place!

Look what I found – turtles!

But there’s more.  So beautiful. 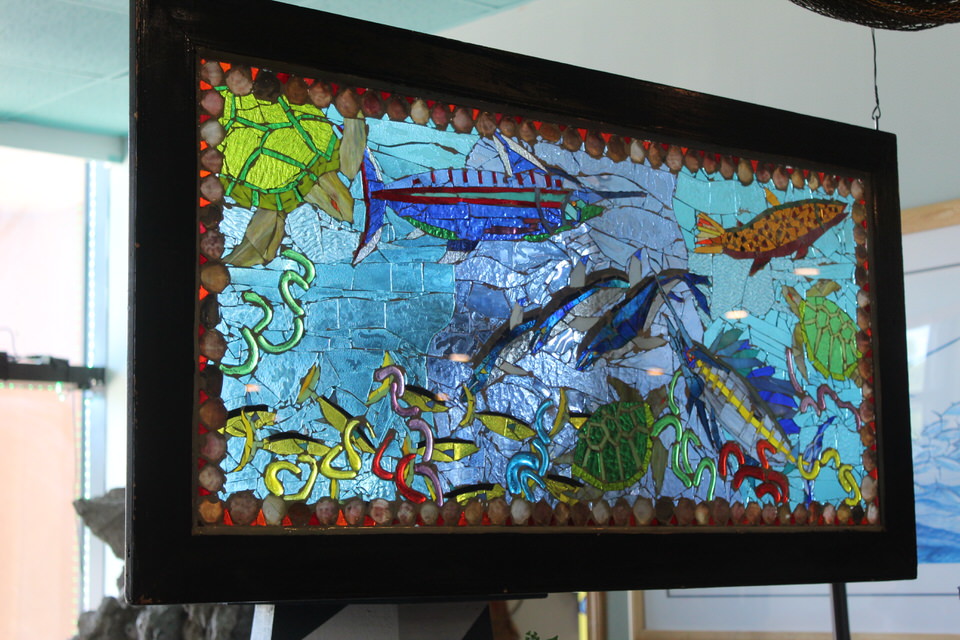 They even had an antique phone booth for Clark Kent. 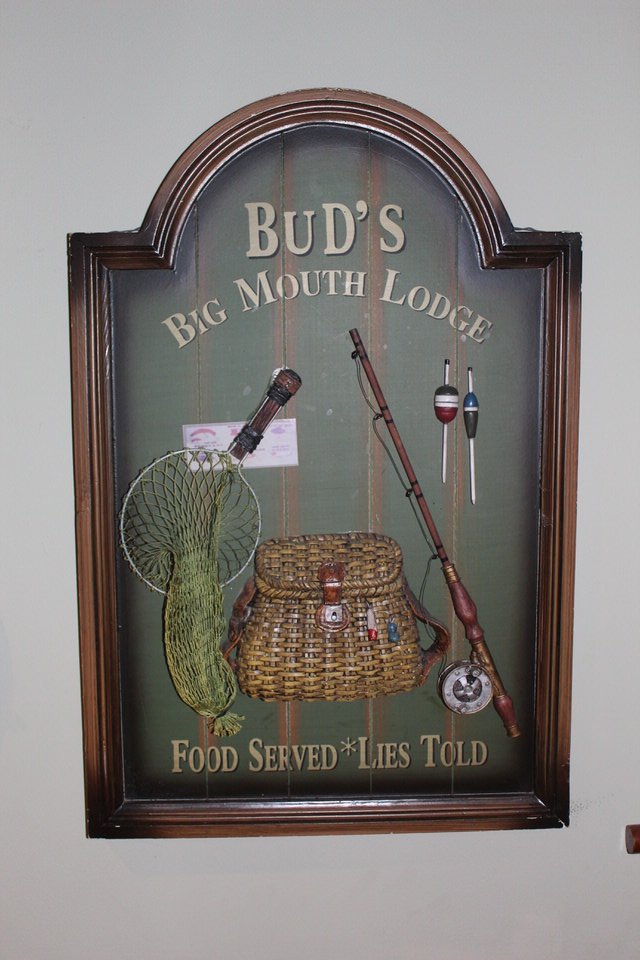 What about lunch?  Take a look. Barbara had a burger, I of course had fish, white fish this time.  Fresh, made to order, generous portions, and absolutely delicious.

That’s what we have been up to the last two days on The Road of Retirement.  We’ve had a wonderful time traveling along, hand in hand, singing our song.  Tomorrow, Barbara has another round of doctor appointments.  The rest of the week we’ll be back to sight-seeing up until the day we leave.

Thanks again for coming along with us.  Have a good night, till tomorrow.