What you say?  Did you move back to Mississippi?  No, I’m just so far behind in terms of blogs that I need to get going.

First things first.  When we awoke this morning it was a rather chilly 59 degrees.  That’s chilly you say?  Yes, when you’re used to day time temperatures in the 90 degree range and night time temperatures never going below 80 degrees.  I’m glad we didn’t put the extra blanket away.

Let’s get going on our tour of the Auburn House.  The Auburn Antebellum Home was built by architect Levi Weeks and prides itself as being the inspiration for the antebellum mansion building craze throughout Natchez. The house was built for Attorney Lyman Harding who served briefly as governor of Natchez.  A notable feature of the house is the outside porch in front and back on the second floor. 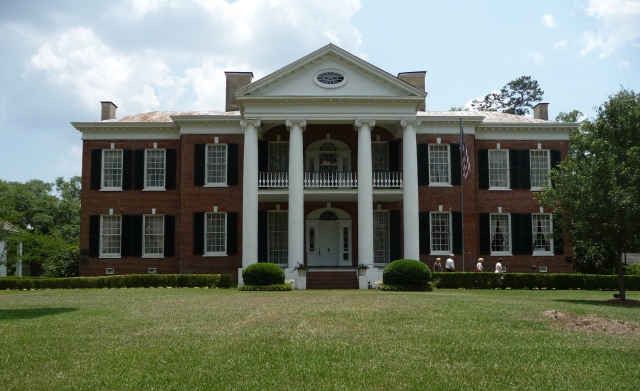 However, the home’s most popular resident was Dr. Stephen Duncan.  In the 1830’s, Dr.

This is the entry hall as you enter through the front door. 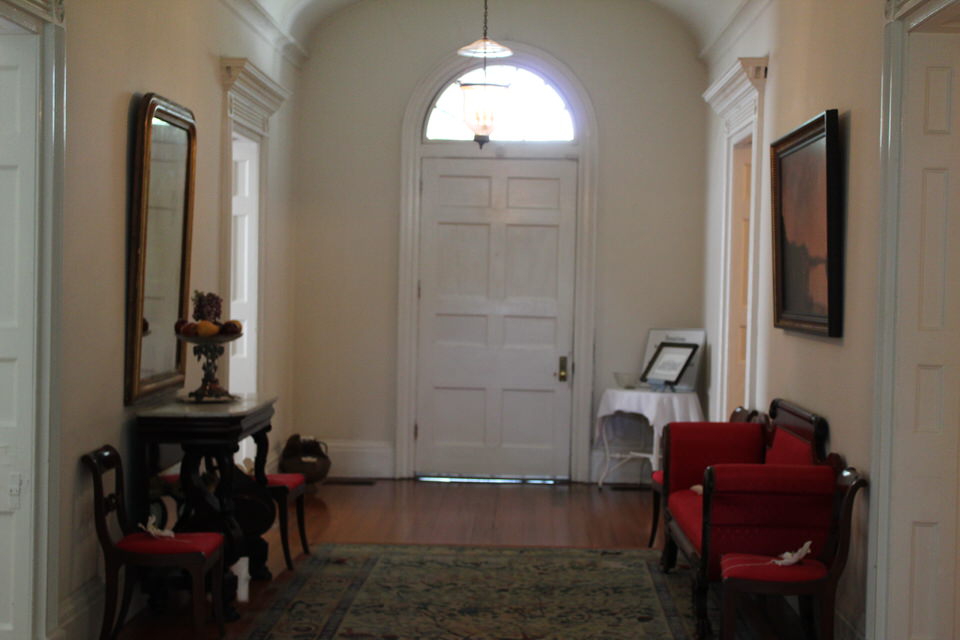 The most notable feature of the house is the free standing spiral staircase.  This staircase has attracted international interest and architectural studies due to its free-standing nature. The staircase is classified as unsupported as it has no connection to the foundation of the house. The structure only meets the floor of the first story and the ceiling of the second. We were told that the staircase was built as one piece.  The wood for the staircase was steamed and then curved to it’s final shape.  Today it is still only one of the three or four freestanding spiral staircases within the United States.

Before we move through the remainder of the house keep in mind that none of the furniture is original to the house.  After the Civil War, Auburn remained in the Duncan family until 1910, when Dr. Duncan’s heirs donated the home and 210 adjacent acres of land to the city of Natchez, to be used as a public park.  The contents of the house were sold at public auction.  Few of those items would ever return to Auburn.  In addition for many years after the house was left basically open and children often played in the house using the spiral staircase as their personal slide.  Today the property is known as Duncan Park and owned by the city, while the home has been restored and is owned by a small organization that depends on donations and tours to maintain the house.  That said let’s move on.

On the first floor is a small sitting room. 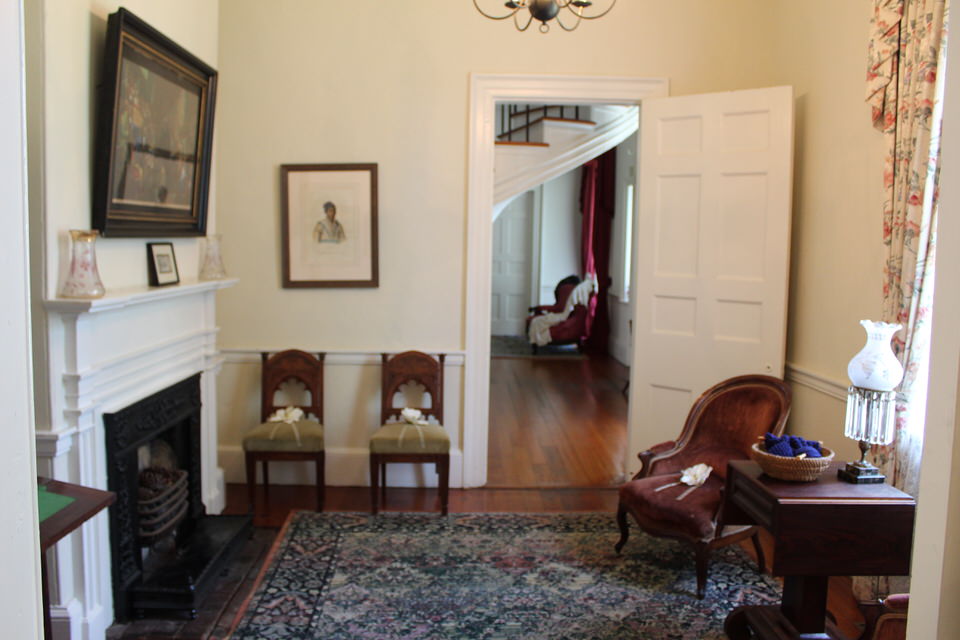 Adjacent to it is the library. 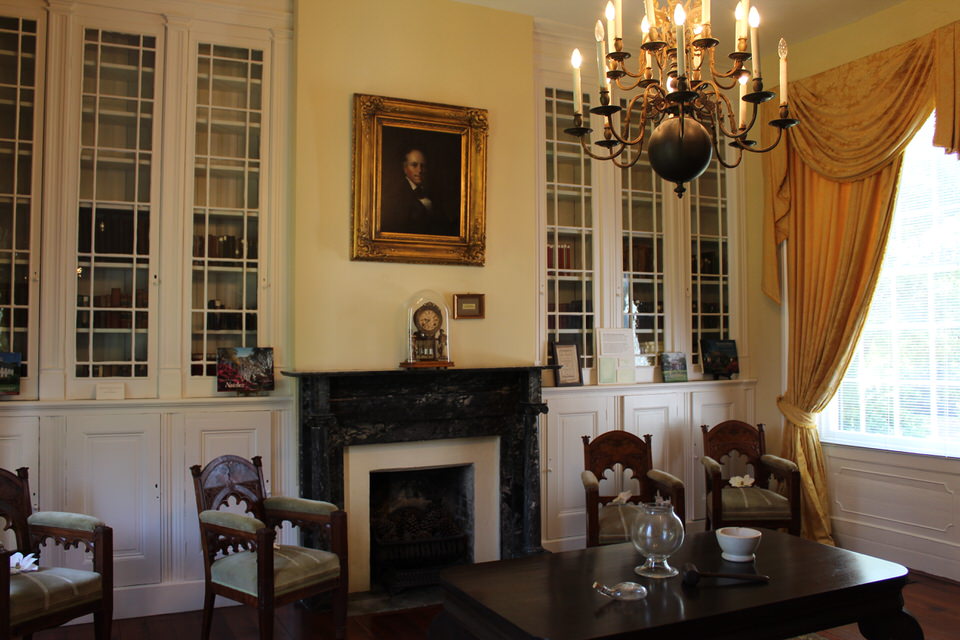 The original marble fireplace that has been restored.

The curtains we were told were one of the few items original to the house.

Moving out of the library across the main hall you come to the dining room.  Room enough to feed a crew of however many.

Look closely and you will find a different type of flower on each plate.  The story goes that this was a sign that at each course in the meal you knew that you were being given a clean plate. 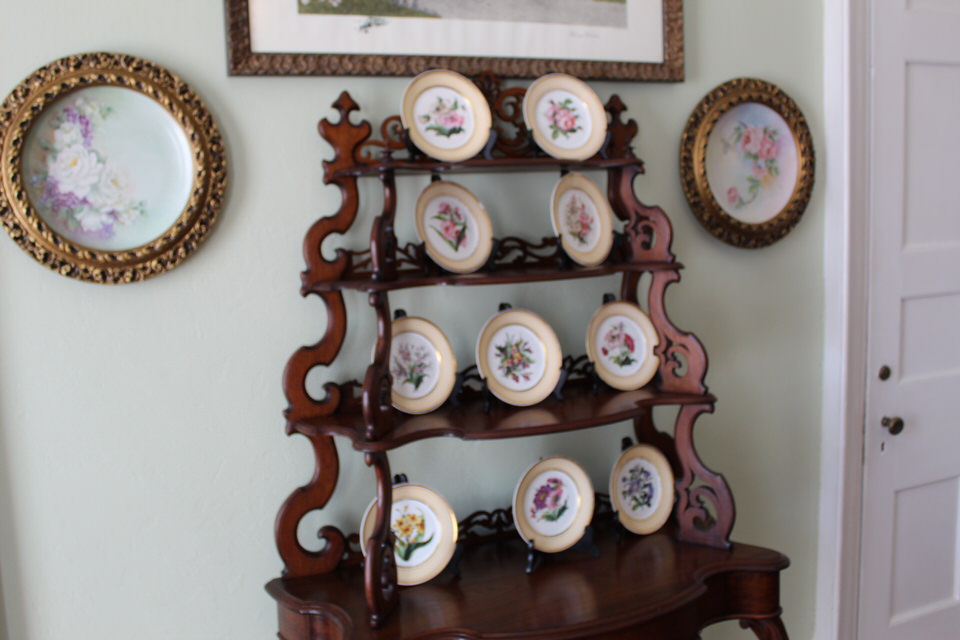 Today this is the gift shop but when Dr. Ducan lived here it was his office.

Moving upstairs this is one of the four bedrooms.  The bed in this room is known as a casket or coffin bed.  Looking at the top of the bed you can see why!  Not my style that’s for sure. 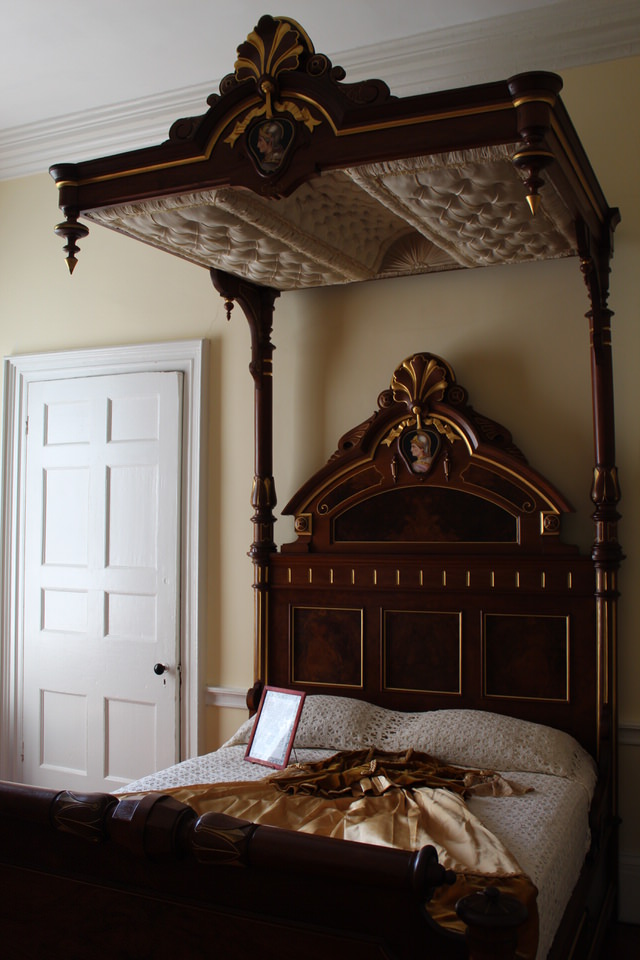 This is a children’s bedroom on the second floor.

Toys that children of that period might have had. 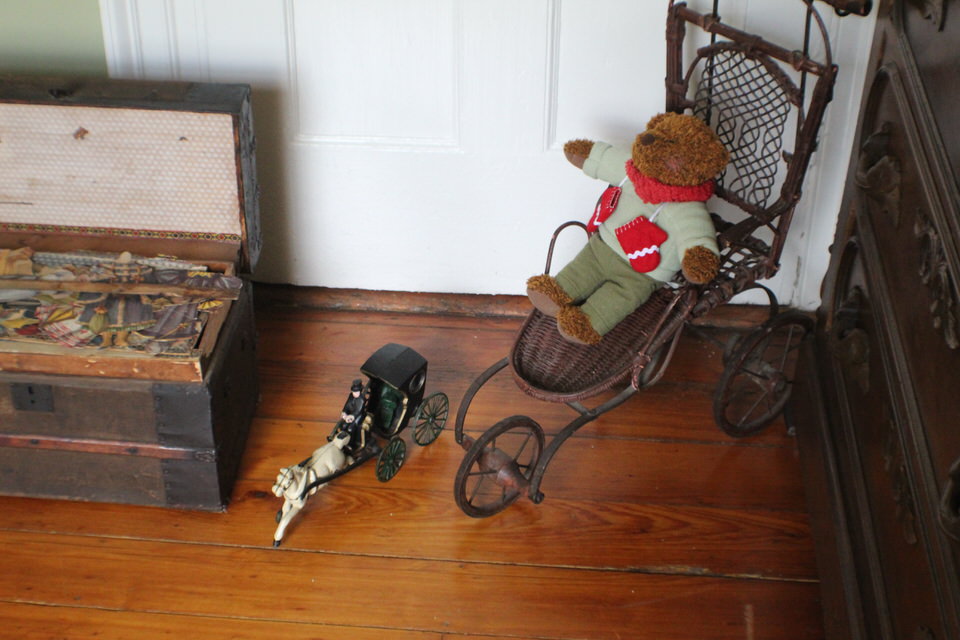 Did you notice the dolls of George and Martha Washington?  We were told that to have either one or the other was a visible sign of wealth. 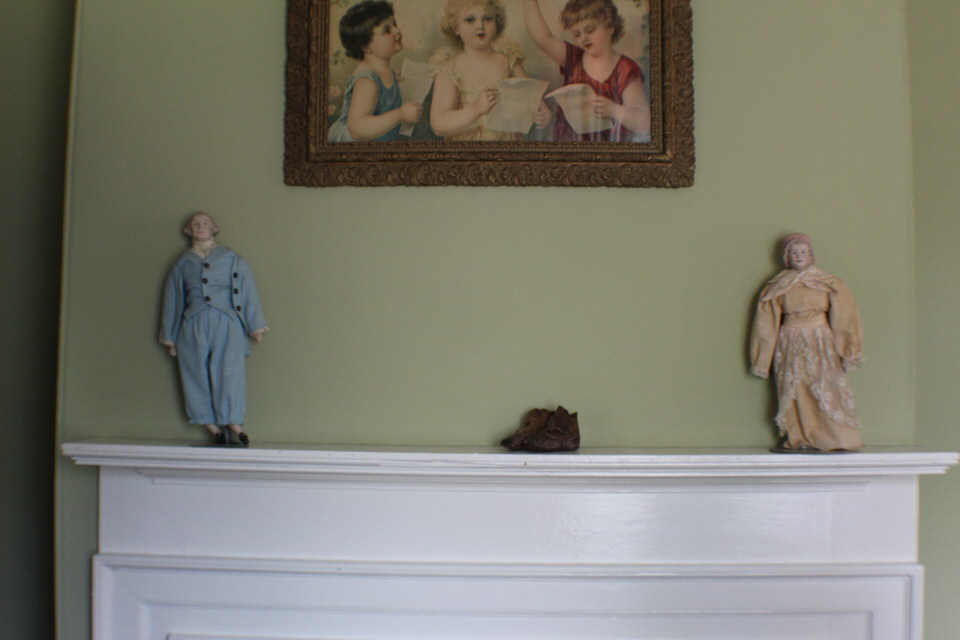 Also upstairs is the men’s parlor where Dr. Ducan would entertain his male friends.  Why the female manikin?  We were told simply because they could not afford to buy a male manikin!

Notice the intricate wood work over the door.

Dr. Duncan, however, was concerned the women in the house might overhear the banner between him and his male friends so the answer was – build a separate building!  This is his private billiard hall, adjacent to the house, built in the Greek Revival style.

Here is an interesting piece of furniture – the courting couch.  Boy on one side, girl on the other and chaperon in the middle.  No hanky panky on this couch that’s for sure!

Behind the main house and off to the left was the small house containing the kitchen and upstairs living quarters for the house slaves.

This is the kitchen.  We were told when food was brought from here to the main house the person carrying it was required to either whistle or sing the whole way – proof that they weren’t stealing a bite! 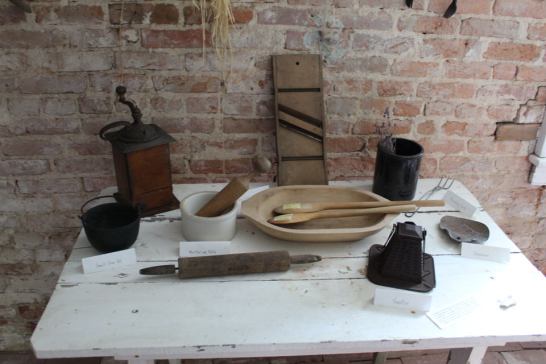 This is a most interesting chair, the seat is made of rags woven together. 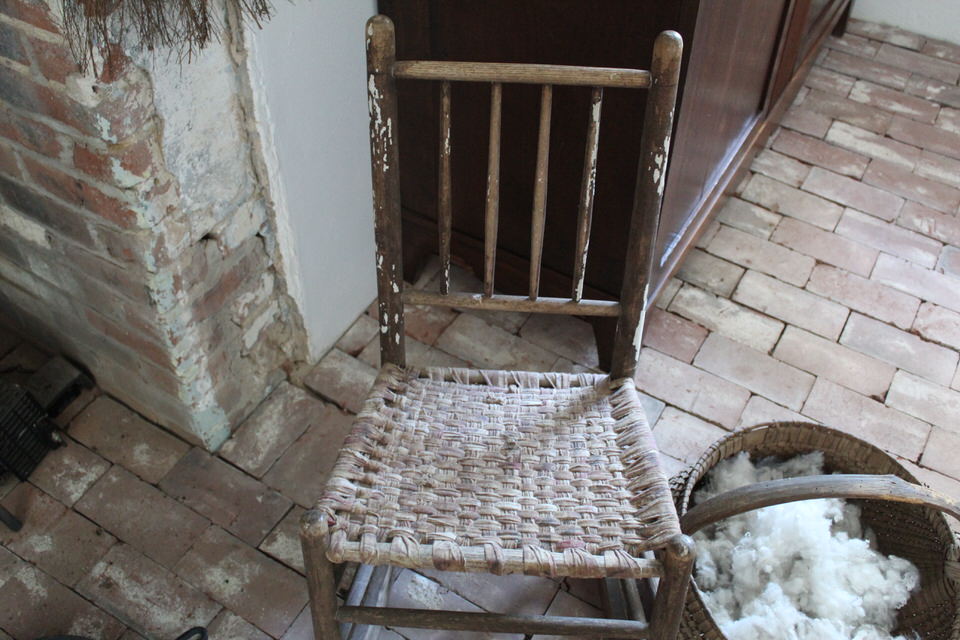 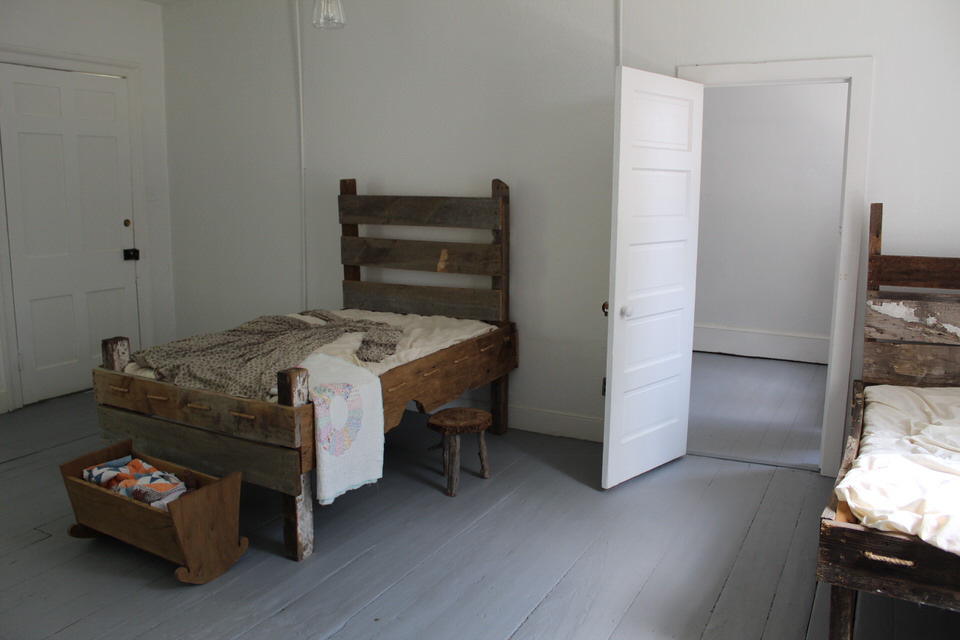 This concludes our tour of the Auburn House.  A different style of house from a different time and period in the history of our country.  We hope you enjoyed the tour as much as we did.  We are always amazed at what we learn as we travel around this great country of ours.

We have now come to the end of our day on The Road of Retirement.  We did a bit of shopping, Barbara was able to get a haircut, I picked up the battery hold down I needed to replace the one that is in place but missing a piece or two.  Plus, I was able to get one more blog done on sight-seeing trips past.  The day was a winner all the way around.  Thank you Lord for the day, our time together and this wonderful, exciting life we are privileged to live.

Glad you were able to travel with us again today.  Catch you tomorrow.

One thought on “TOUR AMERICA 2019: SWEET HOME ALABAMA – A TOUCH OF MISSISSIPPI”