Yesterday started way too early for both of us.  Marti decided at 5:30 am that if he couldn’t sleep then we shouldn’t either.  I have to keep remembering that this is his RV and we live here as his guests!  A fact he reminds us of constantly.

Not wanting to make a mess in the kitchen since we would be moving right after the factor tour we decided to head into town – which is just two blocks long – to a restaurant recommended by the locals.  It is called the Mason Jar. 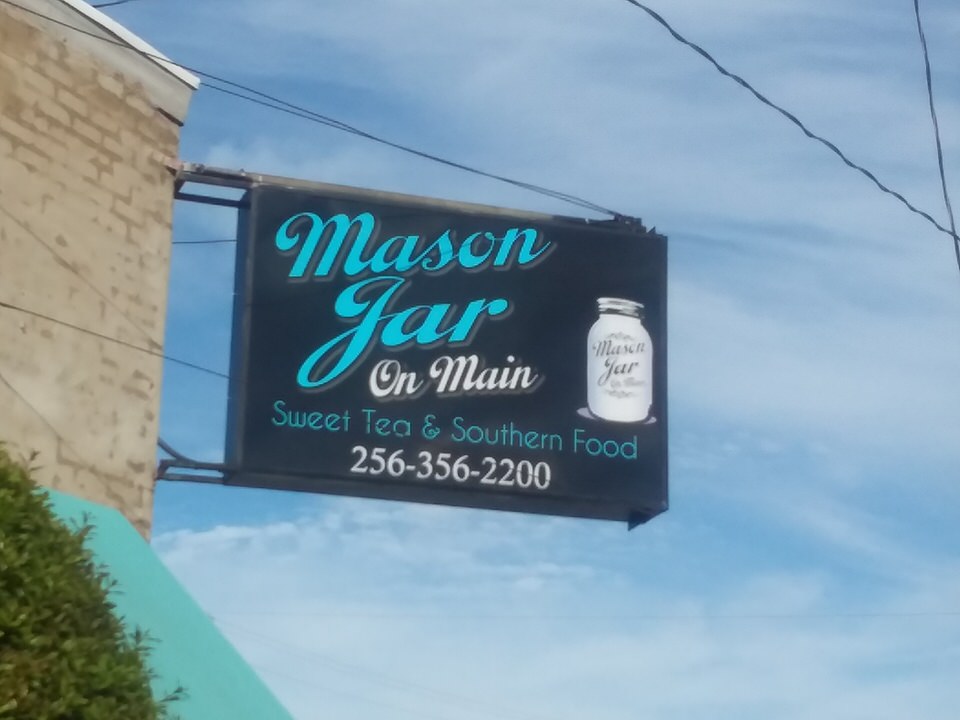 As soon as we walked thru the door we got a good vibe about it. 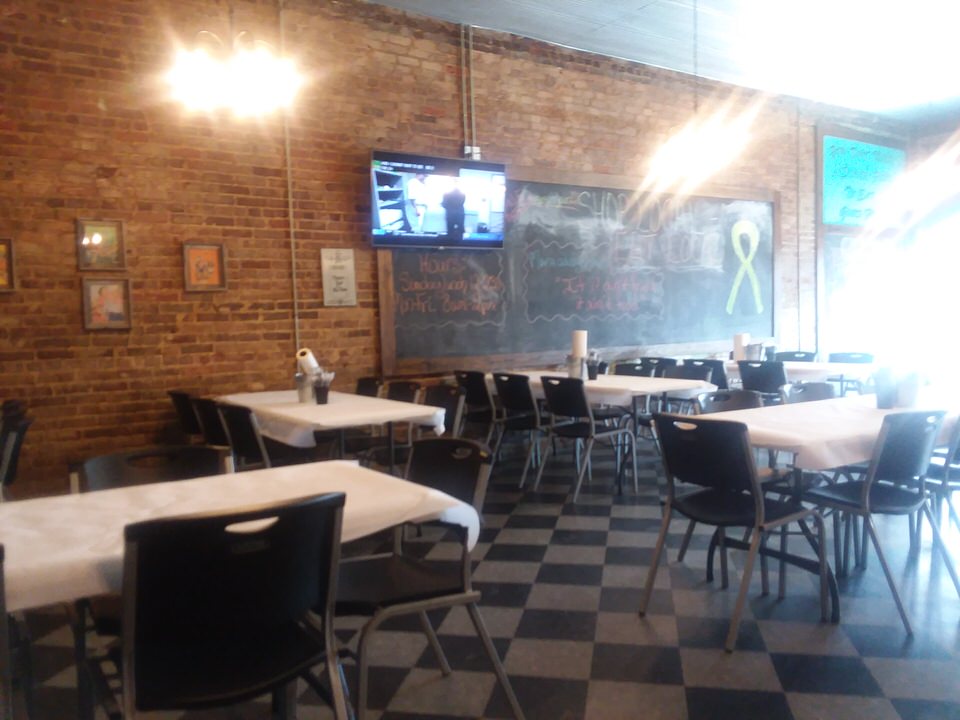 When was the last time you saw breakfast prices like this?

Barbara had the The Mason Breakfast and I had the Omelet Plate.  We were both very satisfied with our choices.  The service was top notch and the food was delicious.  We both cleaned our plates.

Time for the factory tour.  We arrived at the Visitor Center a bit early.

Soon enough, though, the room was full.  They ended up having to split us into two groups.   Everyone had to wear closed toe shoes, a provided safety vest and we were also given radios and headsets so that we could hear our tour guide.   I asked about taking pictures and the reply was We encourage you to take as many as you want.  Nothing is off limits.  Works for me. 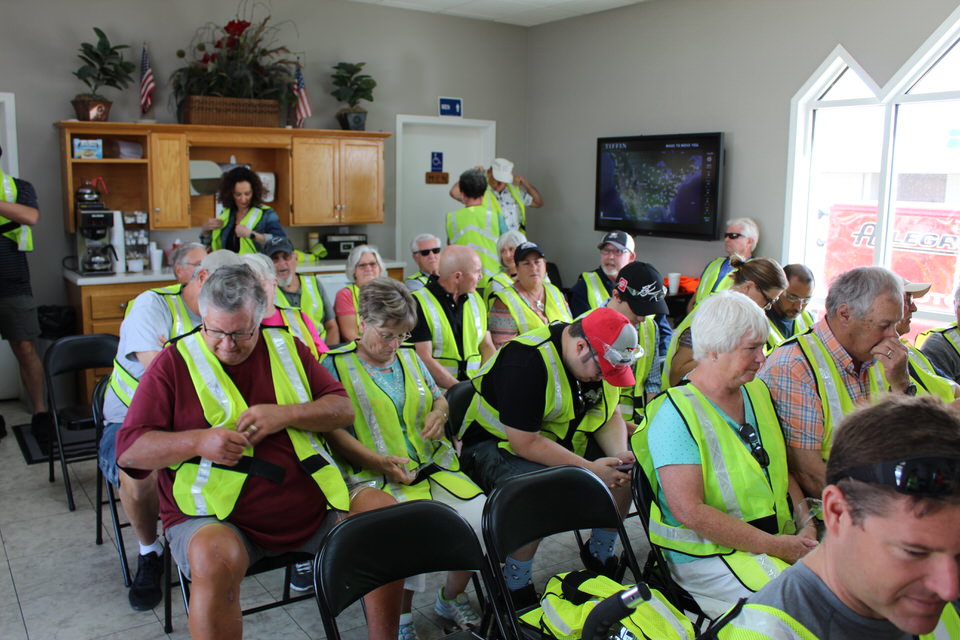 Time to get going.  Put on your walking shoes, limber up the knees and let’s go.  This we were told as we walked by was the location of the corporate offices.  Bob Tiffin’s office is in here.  The next thing they explained is that the chassis and paint plants are located off-site.  We missed both of those tours because of time constraints and the fact that the chassis tour is only given on Monday, Wednesday and Friday.

The first facility we toured was the wood working and cabinet plant.  This is what you see as you first enter, doesn’t appear that big but oh it is.  It is in an old cotton warehouse and has a total of 3,500 square feet.

Looking out into the plant itself.

This gentleman was making an overhead trim ring that goes in the Bus and the Phaeton. 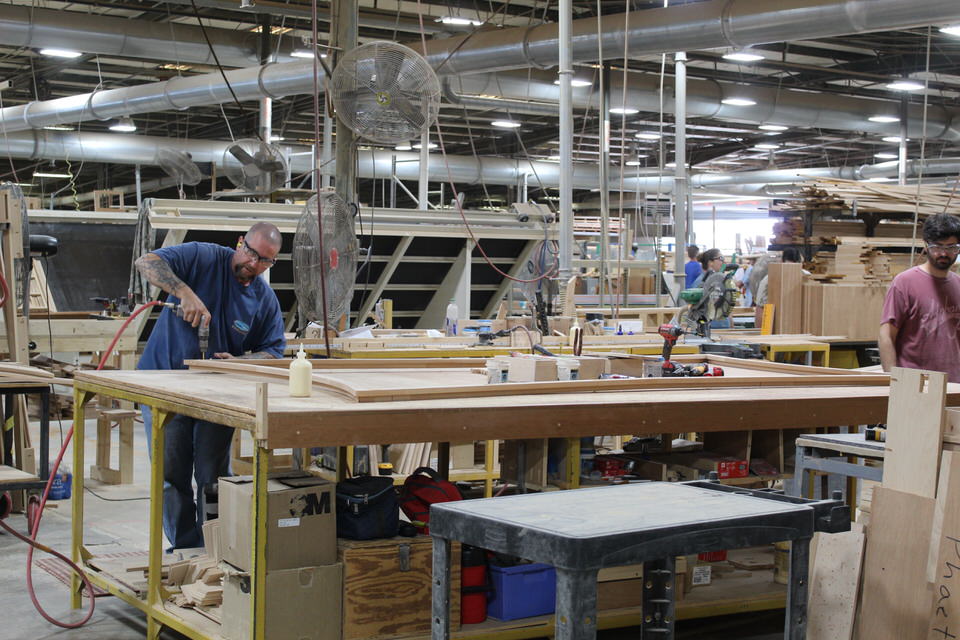 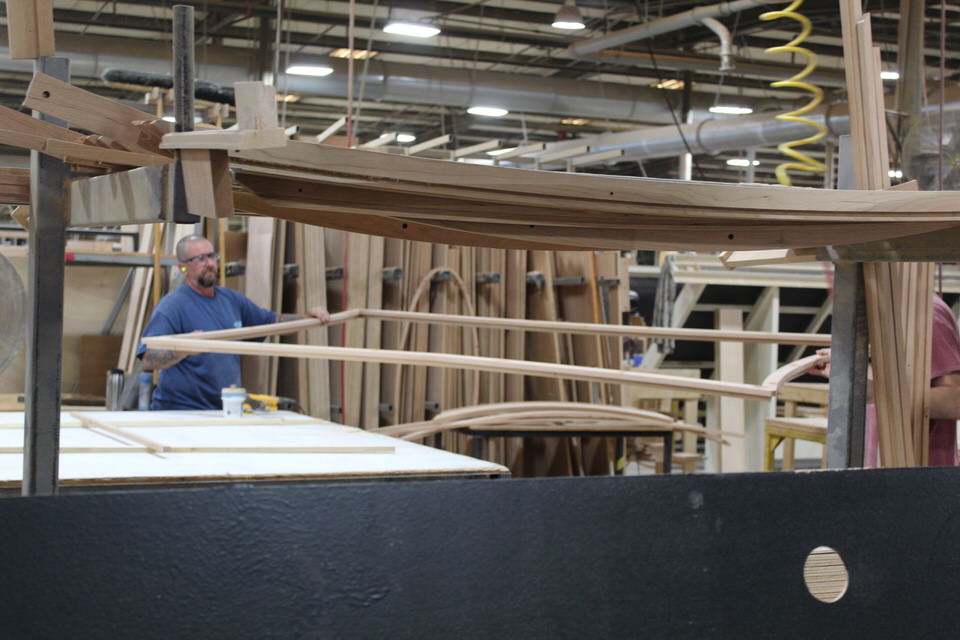 Building a cabinet.  What surprised me a bit when I looked close is the number of staples that were used in place of screws.

Cabinet frames waiting for final assembly.  The question we asked was How do you know what cabinet goes with what coach   We were told that no coach is built until there is an order for it.  At that time it is given a distinctive identifying number.  Everything that is not generic to that coach is then given the same identifying number.  This does two things, it allows them to find where the coach is in the assembly process if the customer arrives and wants to view it.  Also, it lets the assemblers on the assembly line find and install what is supposed to be in that coach.

Attention to detail and finish sanding were evident throughout the plant.

In this picture Cindy our tour guide pointed out on the back of this counter top the red identifying number and the fact that it is going in a 40 foot coach.

This is a computer controlled router used to mill counter tops.  It will shape it, then according to computer instructions make the necessary cutouts in it for perhaps a sink, a faucet, etc. 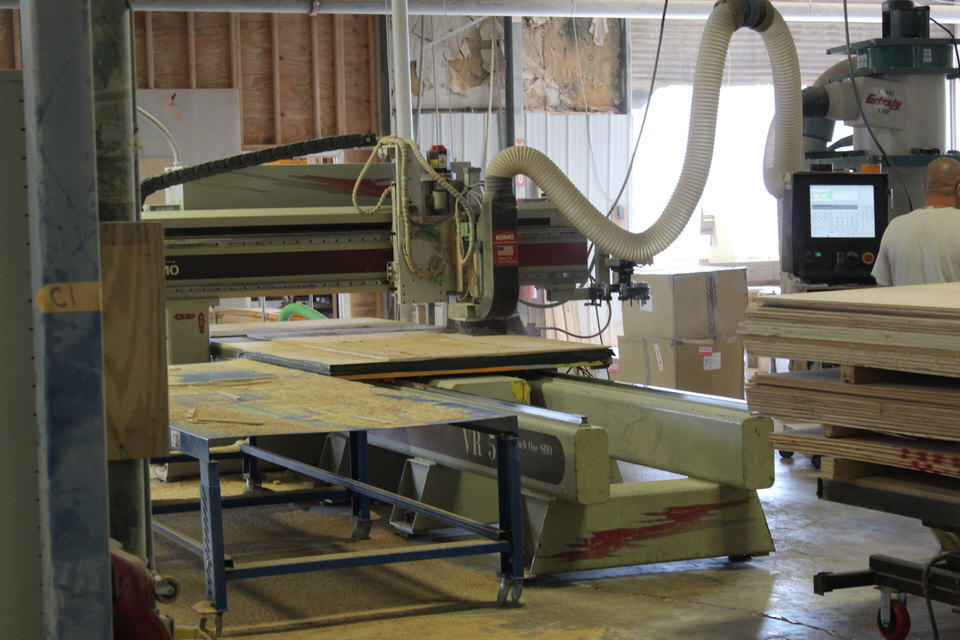 Moving out of the wood working plant we passed the welding plant, which for obvious reasons, we were not allowed in.  This is the plant that creates the raised rail chassis for the diesel pushers and adds various items to the gas chassis.

Chassis’ that have just come out of the welding shop. 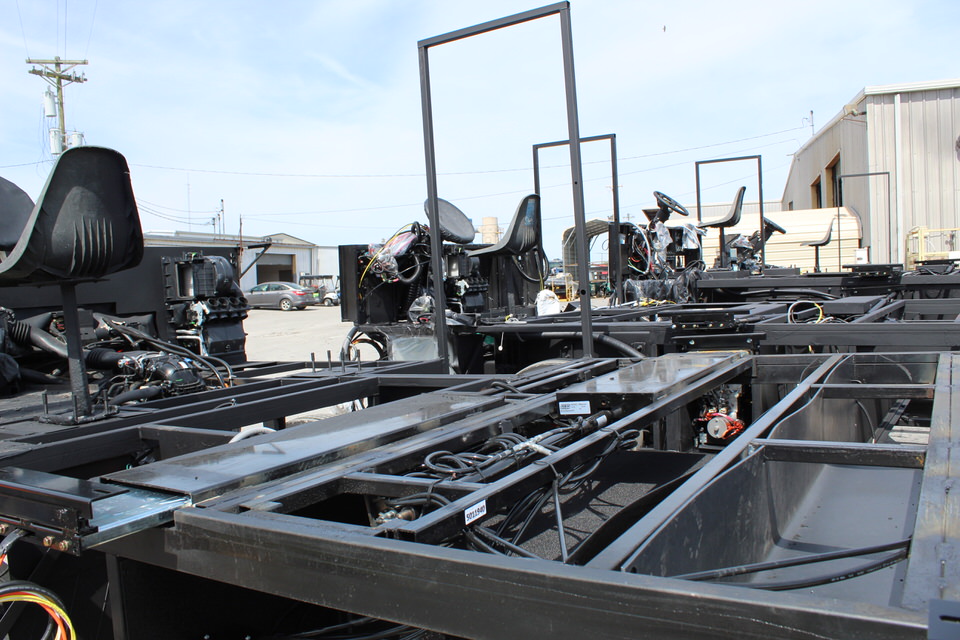 This is an example of a raised rail chassis for a 40 foot rig. 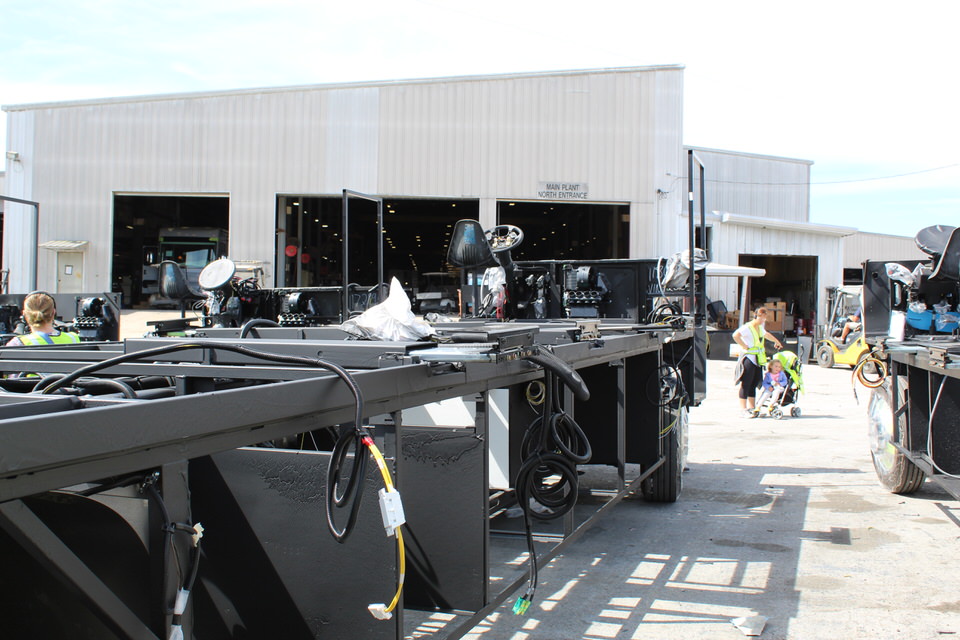 This is the front end of a gas rig.  The next picture is looking at from the side.  The more I looked the more I was amazed that these rigs actually get down the road.  Just look at the bundle of wires hanging in the front, hook just one up wrong and that’s it.  In later pictures you’ll see the same thing when we view the assembly line.  To say that they are complex is a decided understatement.

We’re now moving into the assembly line plant.  This is one of the lines.  They build on average 11 coaches a day, and again, each one has been ordered before it’s build is started.  What follows is I admit an over simplified description of how a coach is built but I hope you can gain some idea of the process and how complex it is. 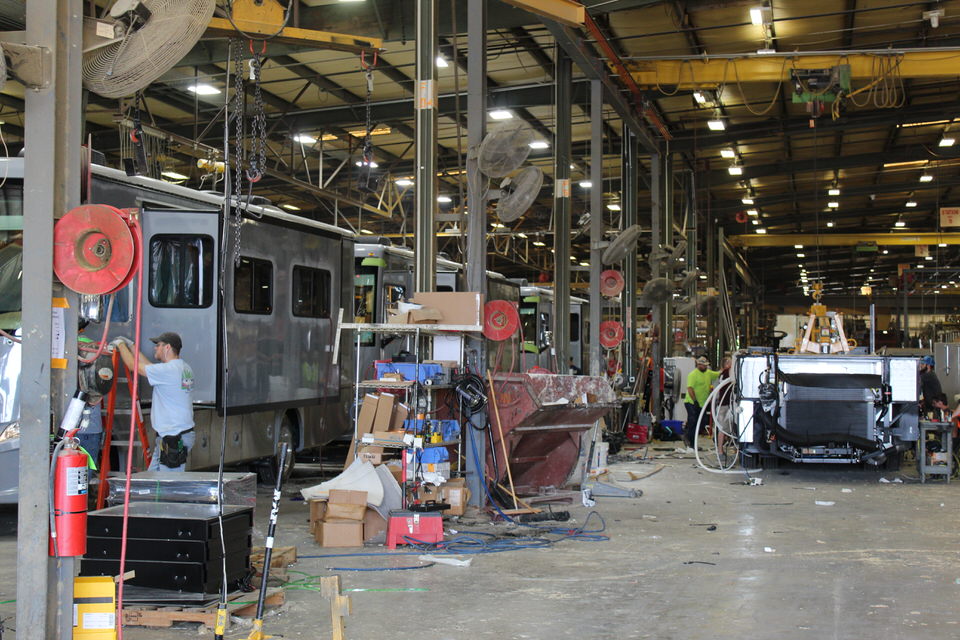 Floors waiting to be installed.

A floor being installed and finishing title put down on top of it.  Many of these floors are heated but we were told this one was not.  In this picture and following note all the wires, hoses, duct work, etc that has to be properly hooked up.  Wew, what a challenge.

The coaches are built from the inside out.  And we wonder why sometimes we can’t get to things to replace or repair. 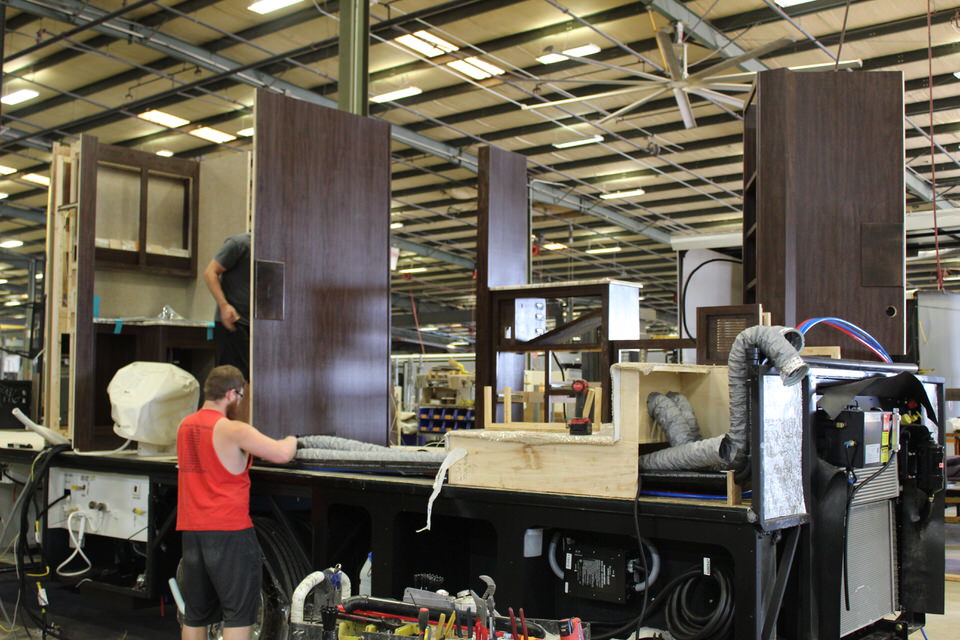 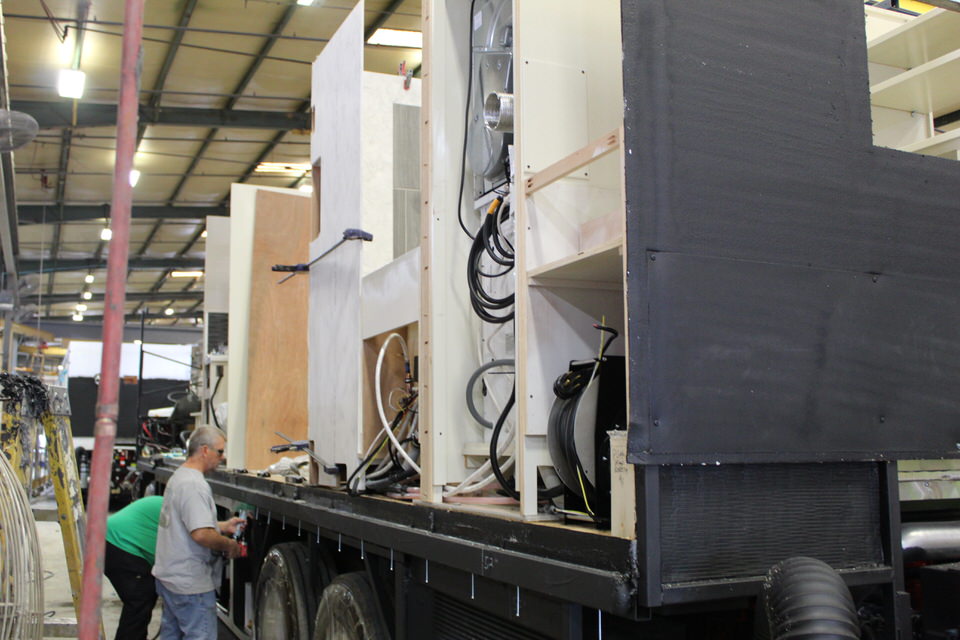 Once everything inside is installed and the miles of wiring are pulled through and properly terminated then the the outside walls are ready to be installed.  There will still be more wiring to be completed once the walls, roof and caps are installed.  In the above picture note the ledge that runs from back to front.  That ledge is what the outside wall will set on.

The front and rear end caps go on.  These pieces are made off site and shipped in on a daily basis.

The finished roof is lifted and put in place.  Once it is in place AC’s will be installed, vents, etc. 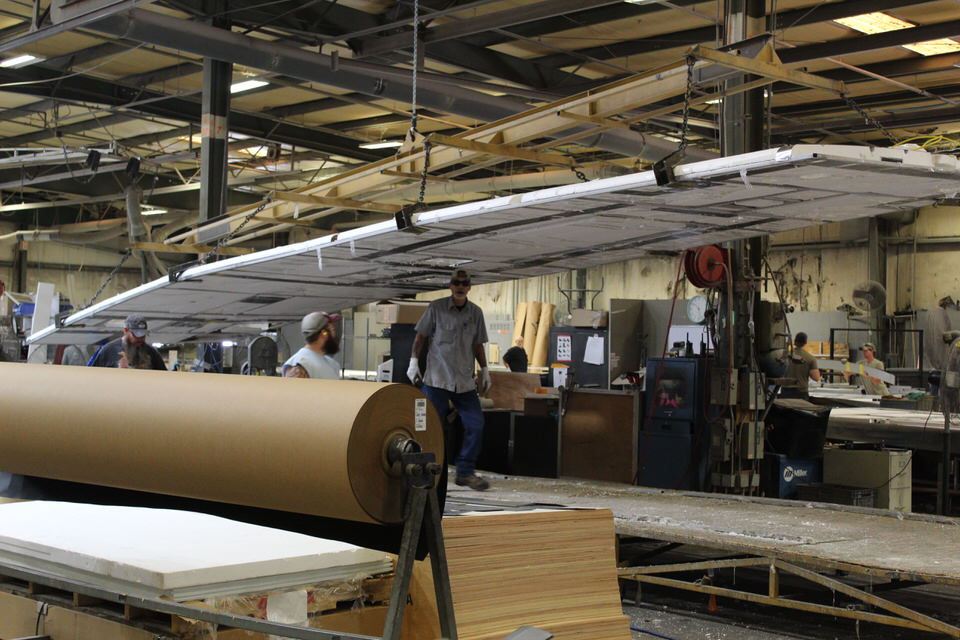 The dash has to be installed 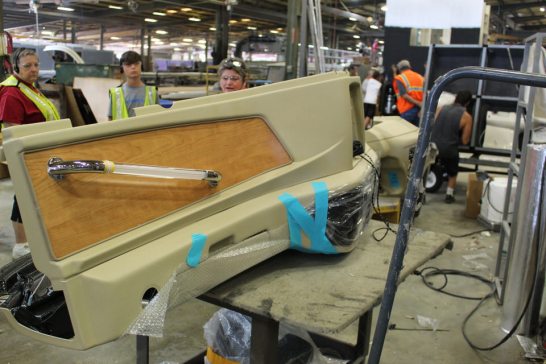 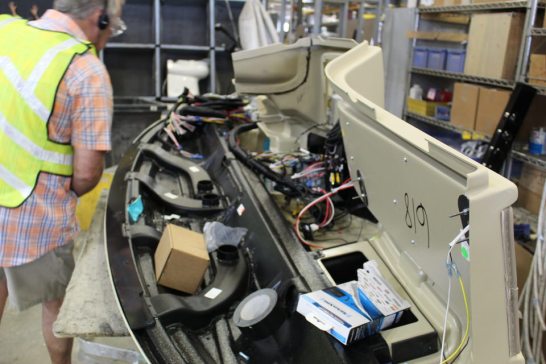 Time for the slides.

This is a full wall slide waiting to be installed. 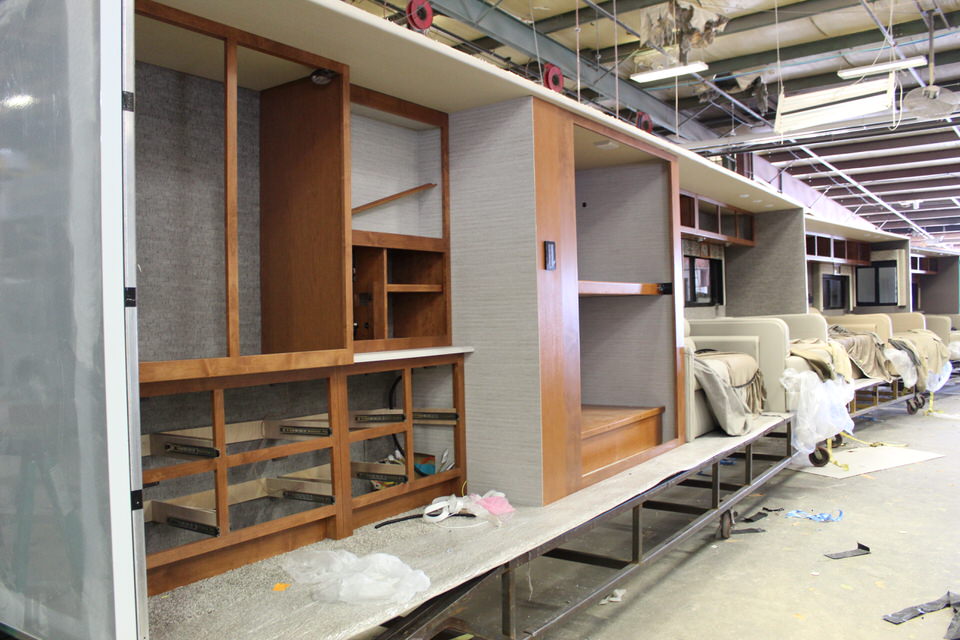 A slide just installed and finishing touches being done.

As the coach moves down the line there are scores of people inside and out working on wiring, cabinets, seats, couches, lights, mirrors and everything else. 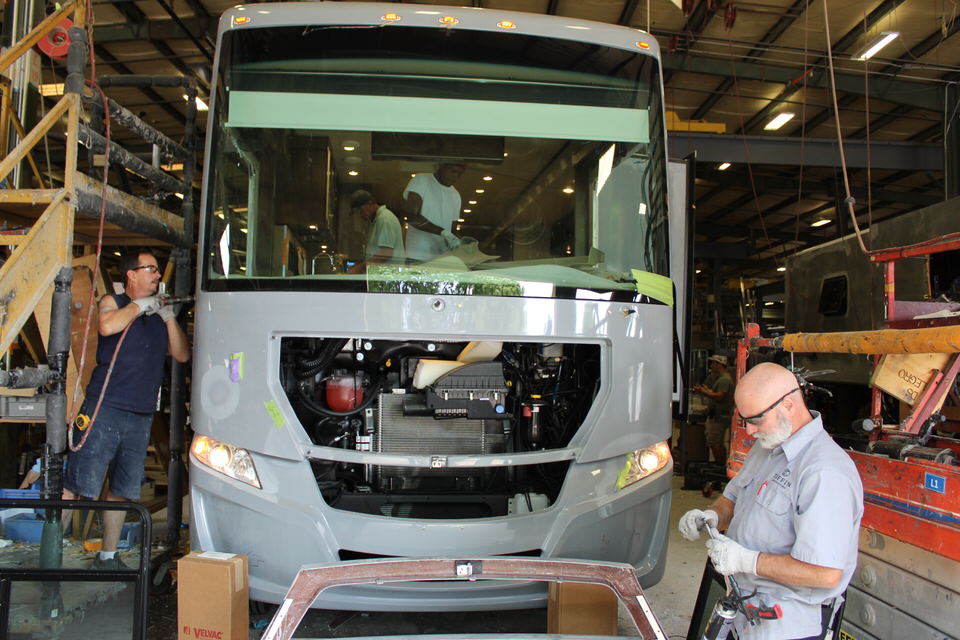 The end of the assembly line.  Checking things off and checking them twice.  After this the coach will be driven to the paint plant.  From the time an order is placed until the coach is ready to be delivered takes on average three to four months.

This is where the wiring looms are made for each coach. 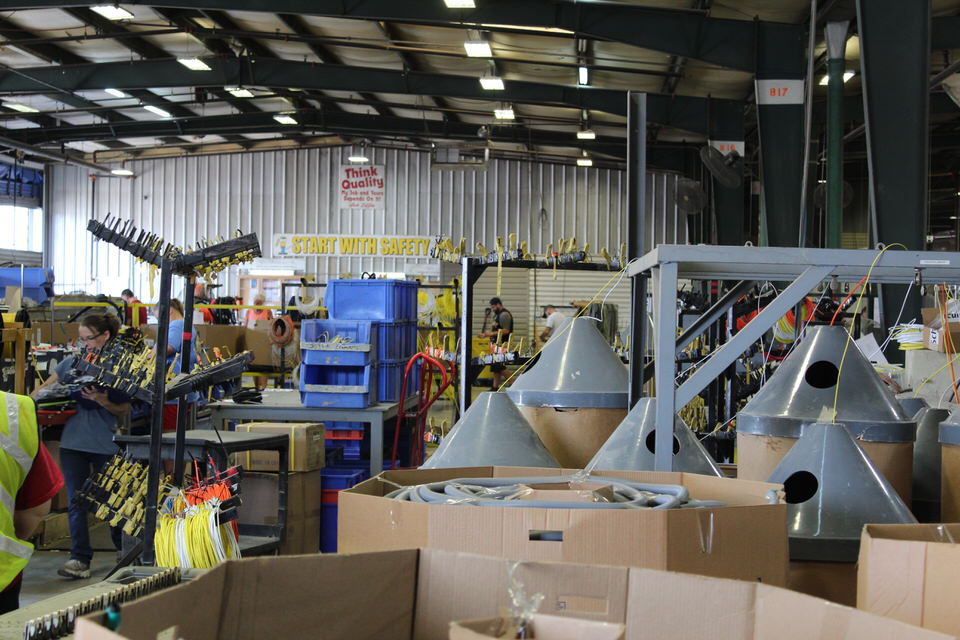 There are only a few different color wires that are used.  However, as our guide pointed out, yellow is not always yellow, look close at it and it might say black or gray.  Just one more item that makes the whole process even more complicated.  I guess the installers are used to this.  This was as far as we were allowed in but I did ask and did catch a glimpse way in the back of the loom board.  This board has a pattern for each coach that allows an individual to create the proper wiring loom for any given coach. 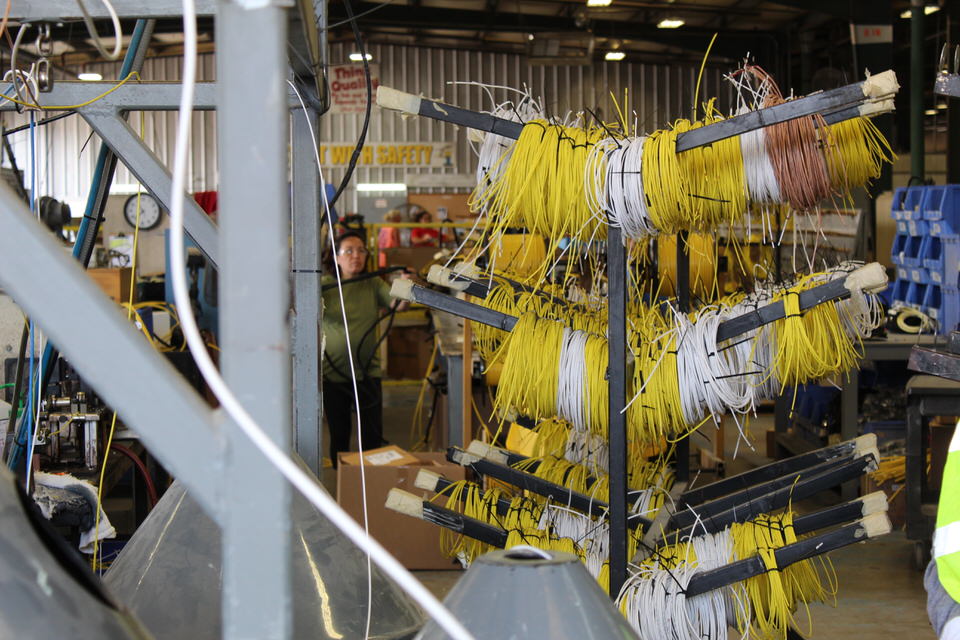 We were at the end of our tour.  As I sat later and though about what I had witnessed during the tour several thoughts came to mind

Finally a blast from the past, a 1976 Tiffin Allegro.  Where did the name Allegro come from?  We were told from Bob Tiffin’s wife who was a music teacher.  Bob was struggling to find a name for his first coaches and she mentioned Allego saying in music it meant upbeat, lively, brisk.  Perfect he said that’s the picture we’re trying to convey, a vehicle that is upbeat, fun to use.  The rest is history.

How about this interior?  Can you imagine that green shag was once all the rage.

Tour finished, we picked up sandwiches for lunch and headed back to Graybeard since we needed to get on the road.  Since we only had to disconnect from the mother ship the process took only a few minutes.  Then it was slides in and we were off and rolling down the road.

It was an easy trip of just a little over two hours.  Soon enough we saw the sign indicating the turn off to our new home.  This is Sharon Johnston County Park.  Sharon Johnston Park is a county park located in north Madison County, Alabama near New Market, Alabama, about 20 minutes from downtown Huntsville, Alabama.  The Park is home to a 50 site RV/campground park. Some sites are wooded but there are also open areas available for campers.  As we turned in our initial impression was a good one.  The park was clean, neat and well taken care of. 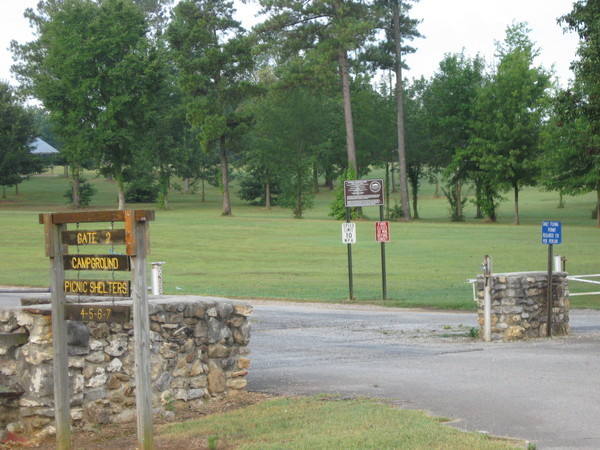 Once again a beautiful park but almost completely empty. 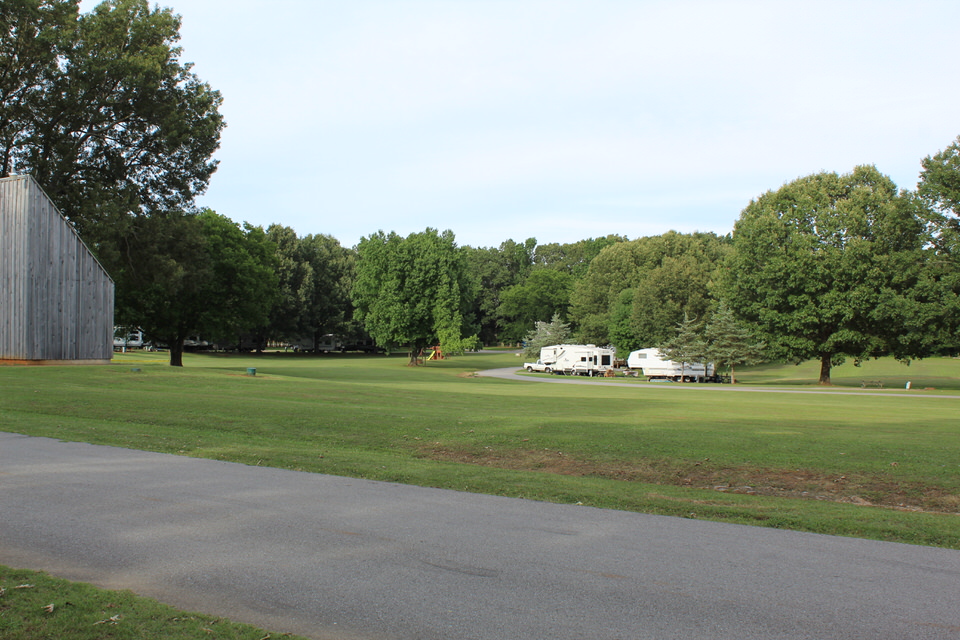 Soon enough we were at our new site.  I walked the site, put my level down and knew right away I was going to need some leveling blocks under the front wheels.  No problem better to know before hand.  This is our new home, paved, FHU, 50 amp and it only took a bit of work to get reasonably close to level.  It’s home for 5 days and we like it.  It is partially shaded but Gertrude likes it even more since out front she has a clear view of the southern sky.

That was our day yesterday On The Road of Retirement.  It was a long day but a great day all the way around.  We checked off another one of our bucket list items.  We had an easy trip.  We have a beautiful new home.  Thank you Lord.

Thanks again for traveling with us.  We always enjoy your company,  Catch you tomorrow.