Today was the day.  The real reason for our coming to this area this year.  We missed it last year but not this time.  So though we got a late start we were committed to going.

The trip there was just thirty five minutes straight up I 75.  No traffic, no construction so the ride was an easy one.  In due time we saw the sign that told us we were there. 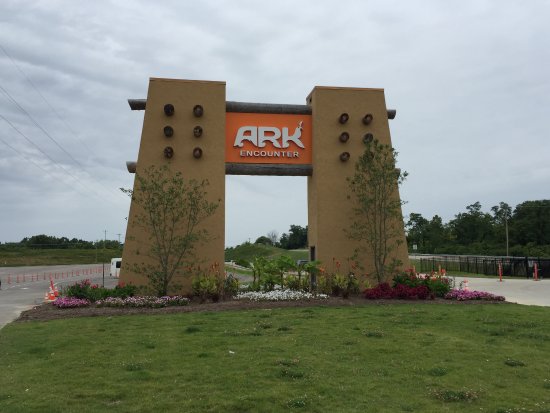 Once parked we headed off to get our tickets.  It looked like a long wait but the line moved quickly.  Why didn’t we get them earlier on line?  Because if you buy them in person I get both a senior citizen and military discount.

Tickets in hand time for the bus ride to the Ark.  This is one part of the whole equation that they need to give some fresh thought to.  Quite frankly, there simply aren’t enough buses to handle the crowds.

Here it is, the Ark itself.  Saying that it is huge is a decided understatement.

Here are some pictures of the inside framing.  The Ark was constructed by Amish craftsman using traditional timber framing techniques.  In total, over 1,000 craftsmen were employed in the ark’s construction.  While the builders originally planned to hold the ark together with wooden pegs, modern building codes required the builders to use steel fasteners, thus 95 tons of metal plates and bolts were used to connect the wood together.

During our tour we discovered exhibits with information regarding Noah’s Ark and the Ark Encounter.

A woodpecker would have a field day with the Ark Encounter!

It is what it is and it served its purpose.

The Ark Encounter is just a bit longer than a typical football field with both end zones.

A place for everything, and everything in its place.

Now as you approach the entrance to the Ark Encounter you start to see animals, two by two heading toward it.

The first thing one needs to know is that there is a good deal of artistic license taken with the displays in the Ark Encounter.  A fact that they freely admit in the very beginning.  This is not meant to take away from what one sees but to put things in their proper perspective.

As for some of the actual exhibits.  There was one whole exhibit about Noah.

The eight on board had their own living quarters.

Living quarters for some of those on board.

Noah and his wife.

A place to gather for meals and to perhaps just relax.

There were so many exhibits regarding the animals that were thought to be on the Ark.

I found Barbara’s favorite among the displays.  But though I searched, and searched I never did find my poor turtle.

Of course inquiring minds such as mine wanted to know

Other possible methods for ventilation.

This was a fantastic exhibit!  The day was well spent touring it.  We are so fortunate that we had the opportunity to come back to see it this year.

It was $9 for all you could eat.  Southern fried chicken, pot roast, ribs, meat balls, mashed potatoes and gravy, mac and cheese, fish, all kinds of vegetables, and so much more I can’t remember it all.  Yes, drink included!

The plan now is to tour the Creation Museum on Sunday.  When we leave here we’ll drive up in Graybeard, park somewhere in the visitor’s lot, and tour the museum.   When we’re done we’ll then move to our new home in Ohio.

That was our day on The Road of Retirement.  Once again it was jam packed from morning to afternoon.  It was a day, too, that we will long remember.  We’re so, so thankful to the good Lord for the days He gives us, especially days like this where we go together to learn and discover exciting new things.

Thanks again for joining us today.  We always enjoy your company.  Till tomorrow.