Home Is Where We Park It:  East Fork State Park, Bethel, Ohio

Today was our day to go sightseeing.  We already had a destination in mind, one we had discovered a couple of months ago on the internet.  Since it didn’t open until around 4 pm in the afternoon we were in no big rush this morning.

Which was alright with me since I had a mystery to solve.  Last night after I went to bed Barbara let Marti out but then she had a hard time getting the door closed.  She called me from the back and said something is hitting somewhere.  She was right but I wasn’t up to investigating at such a late night hour.  I got it closed and that was just fine with me.

This morning I decided to resolve the issue.  Let me just say as always it is the simple things that trip you up.  I tried the inside door first.  It closed just fine.  Next, the outer door.  Something wasn’t right.  I checked the hinges.  OK.  I checked around the outer rim of the door.  OK.  So what in the world?  Guess what?  The dead bolt had gotten turned and was partly out.  Turned it back in and bingo, problem solved!

Time to go sightseeing.  We really had no idea of what we would be seeing.  Would it be large?  Small?  Nothing at all?  It was thirty five minutes away and the GPS did its job and took us right to The Cardboard Boat Museum.  The Museum is located in New Richmond, Ohio, home of the International Cardboard Boat Regatta.  The Regatta has twenty eight different classes and trophies, including one for speed.  The most coveted, though, is the Titanic Award, a crowd favorite, for the most dramatic sinking 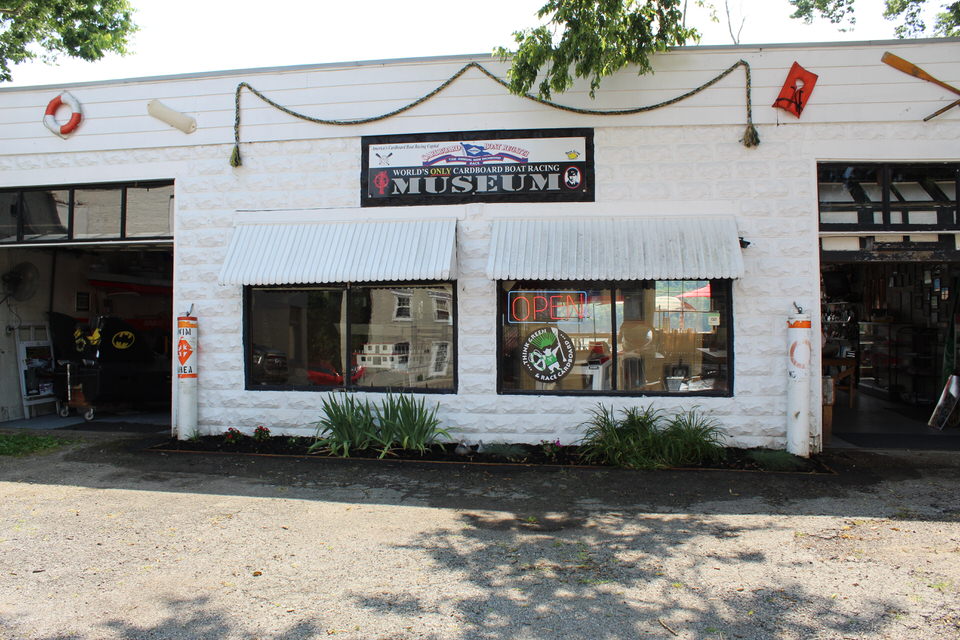 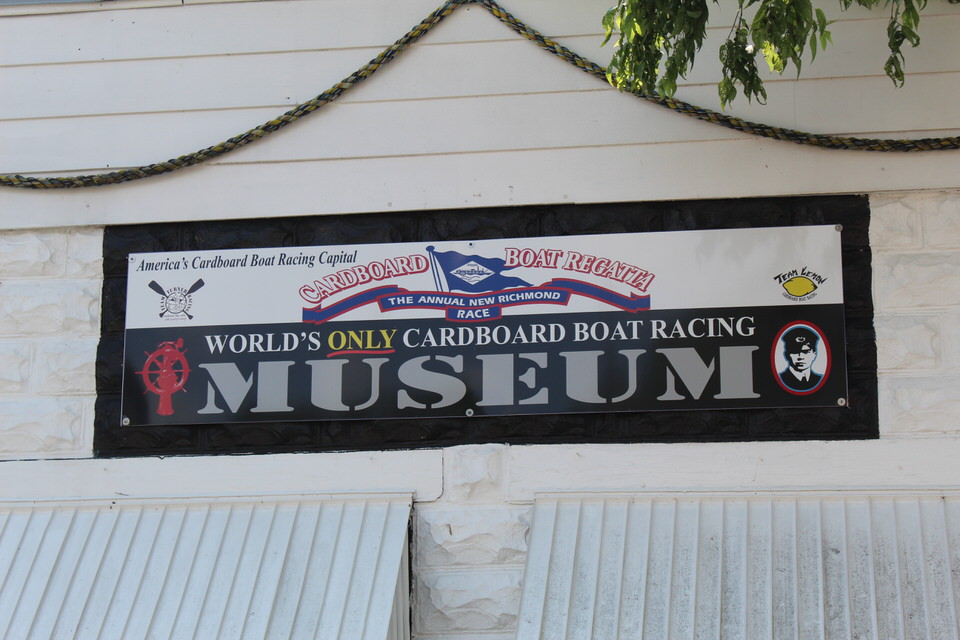 It was hard to miss the Museum with these two boats sitting outside by the curb.

Yes, this too is a boat!  Remove the top, slide down in, there’s a set of pedals that power a propeller in the back for propulsion.

The Museum is managed by Team Lemon, the nations most prolific team builder and racers of exotic and unusual boats.  They have been designing, building, and racing cardboard boats for over 15 years. 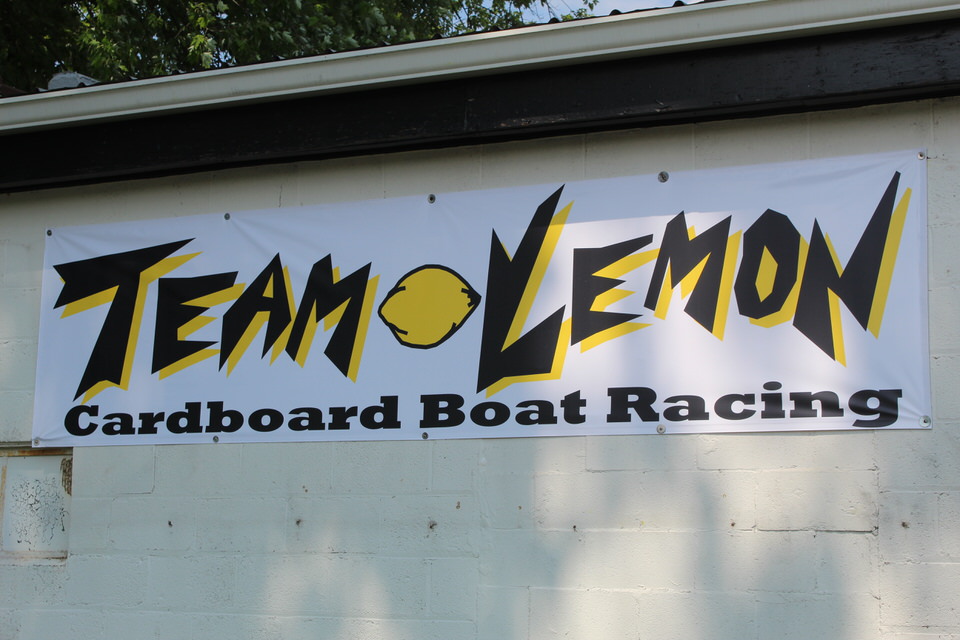 This is what you see inside as you walk in from the parking lot.  Cardboard boats to the left, to the right and even overhead.  We were told that these boats have raced in the past and will race again in this year’s regatta.

Remember the Island Queen that sat outside?  Here is its duplicate and what makes it go.  You take off the top, slide on down in and 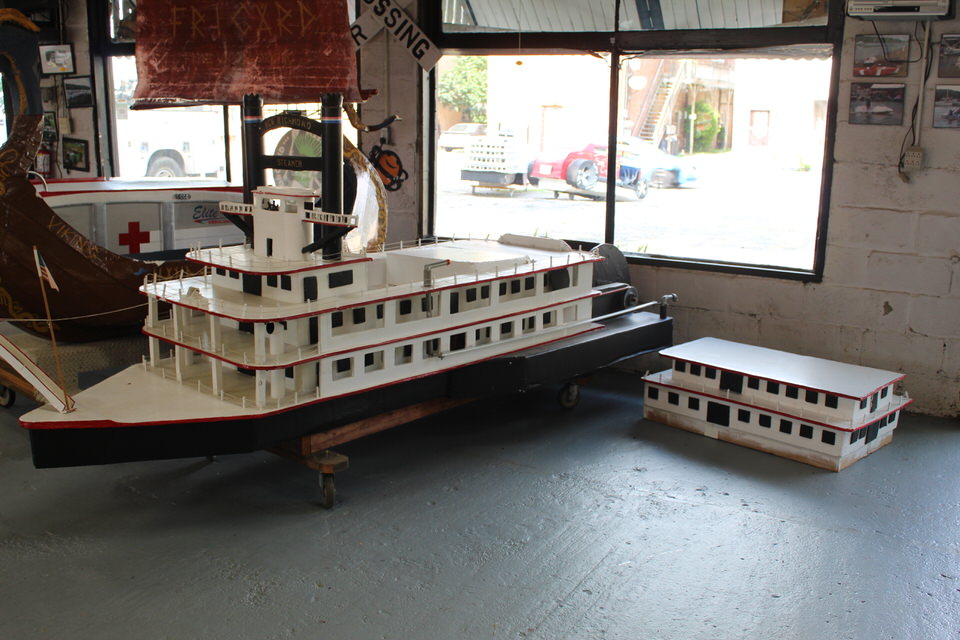 you have a set of pedals that powers the paddle wheel in the back.  The two handles on either side control the rudders.

So how do you make a cardboard boat?  These are the basic steps involved.  Draw a pattern, lay it out on the cardboard, cut the necessary slits to fold the cardboard up, tape them all together, wrap it with a layer of cardboard and just like that you have a boat. 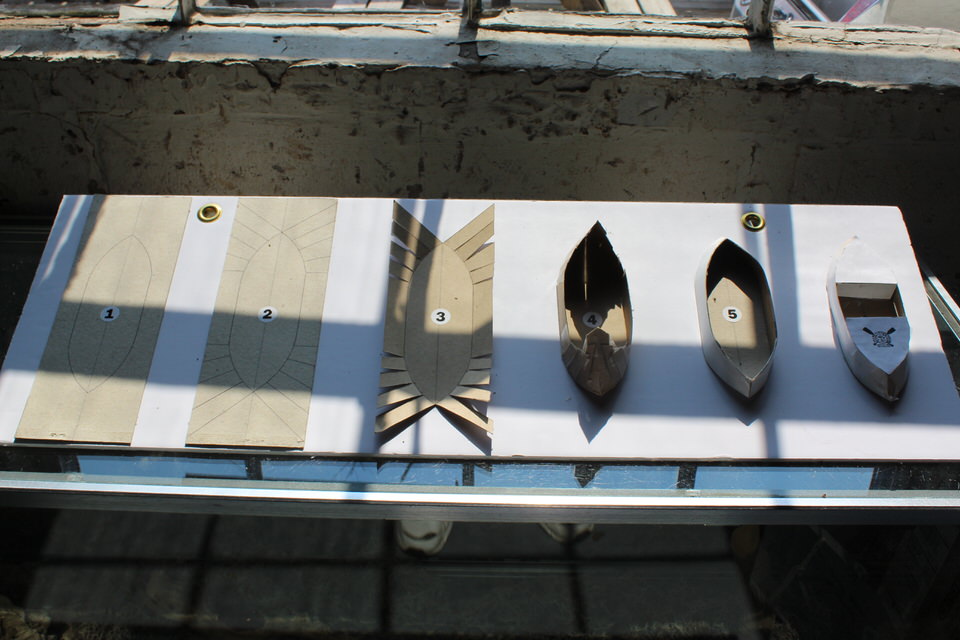 Here is one that is in the process of being finished. But you say they’re made of cardboard which soaks up water and if it soaks up enough will sink.  Yup.  How do you avoid that?  Coats of simple house paint.  Now imagine that!

Here are some of the more interesting boats in the museum.  Remember the trophy I mentioned that is given for speed?  The boat in the middle of this picture has covered the 200 yard course with a single paddler in 57 seconds.  That’s moving. 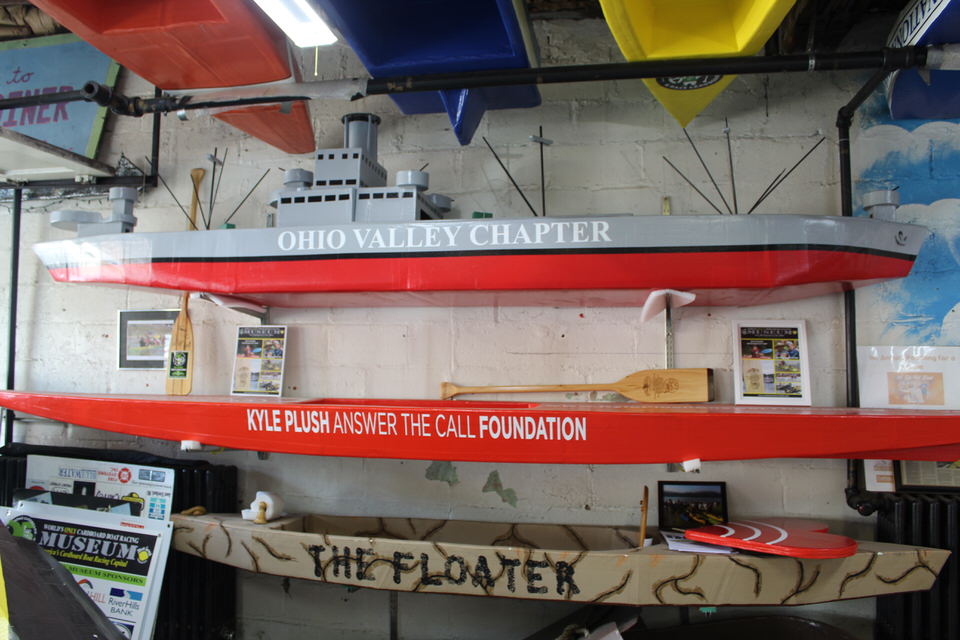 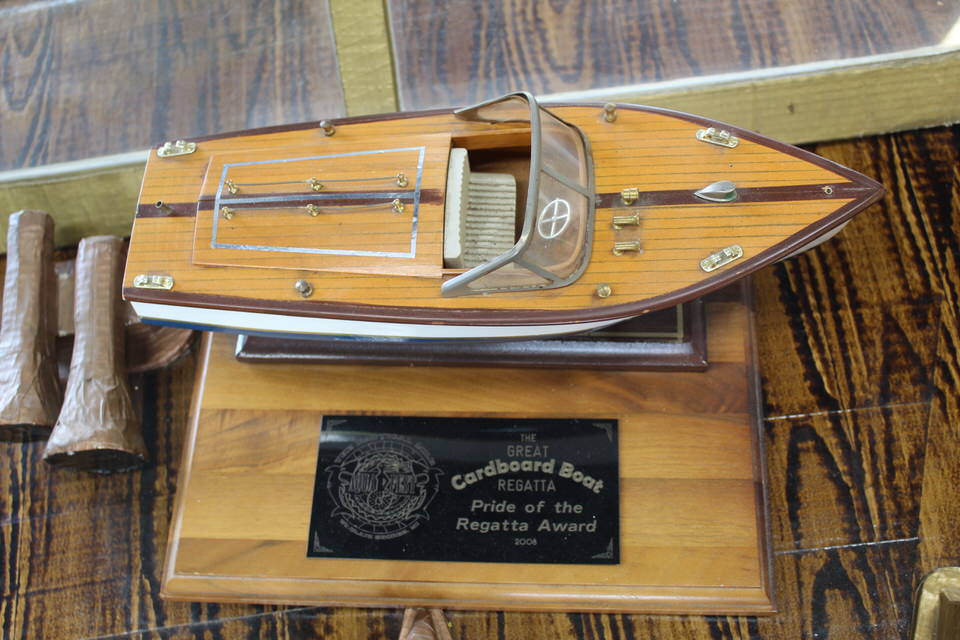 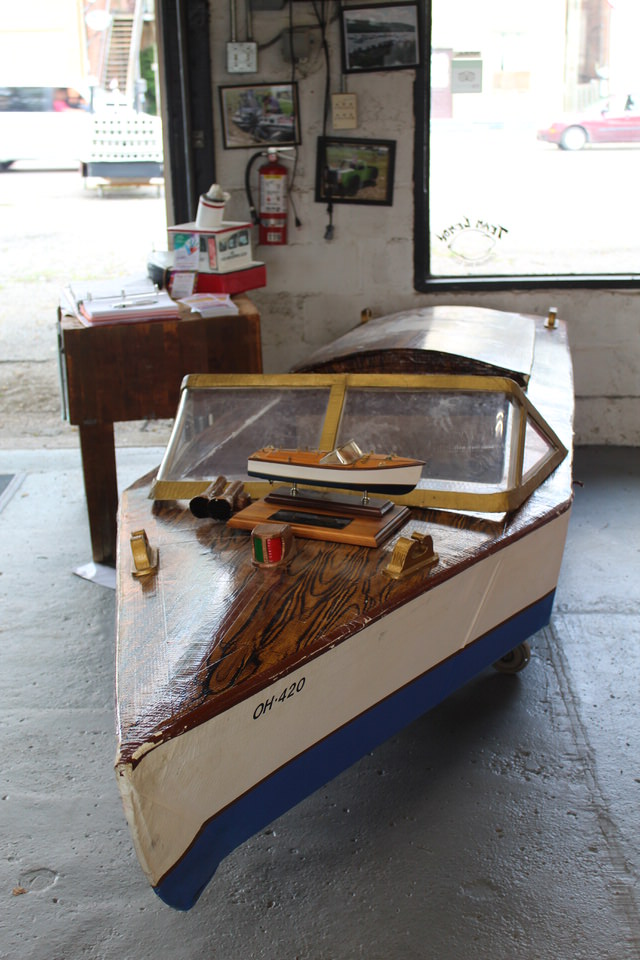 Play me a tune while you float down the river.

I wish the cardboard box wasn’t blocking this one.

For a small donation you too might win your own cardboard boat for this year’s race.

From last year, a candidate for the Titanic Award. 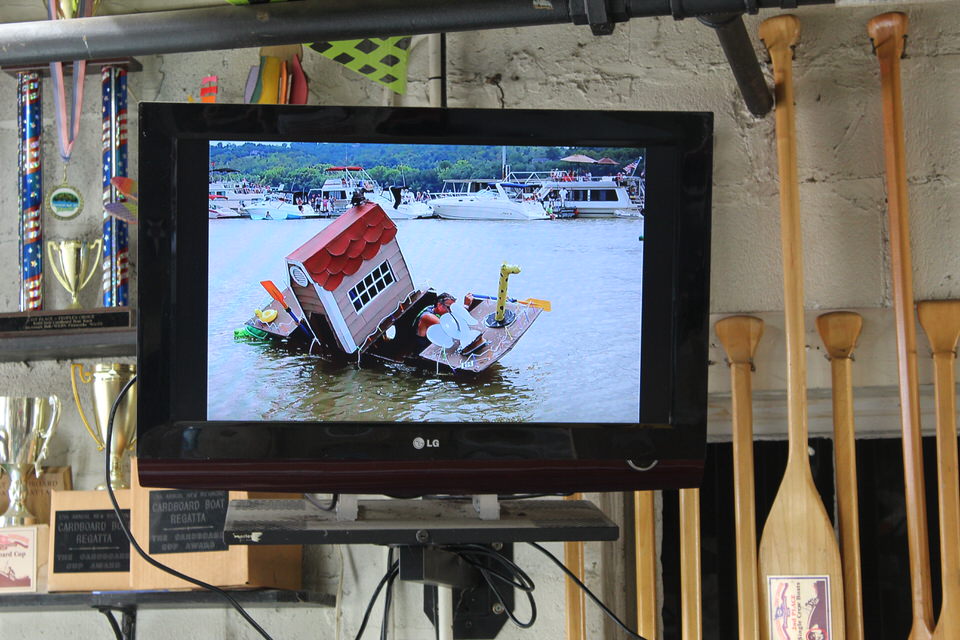 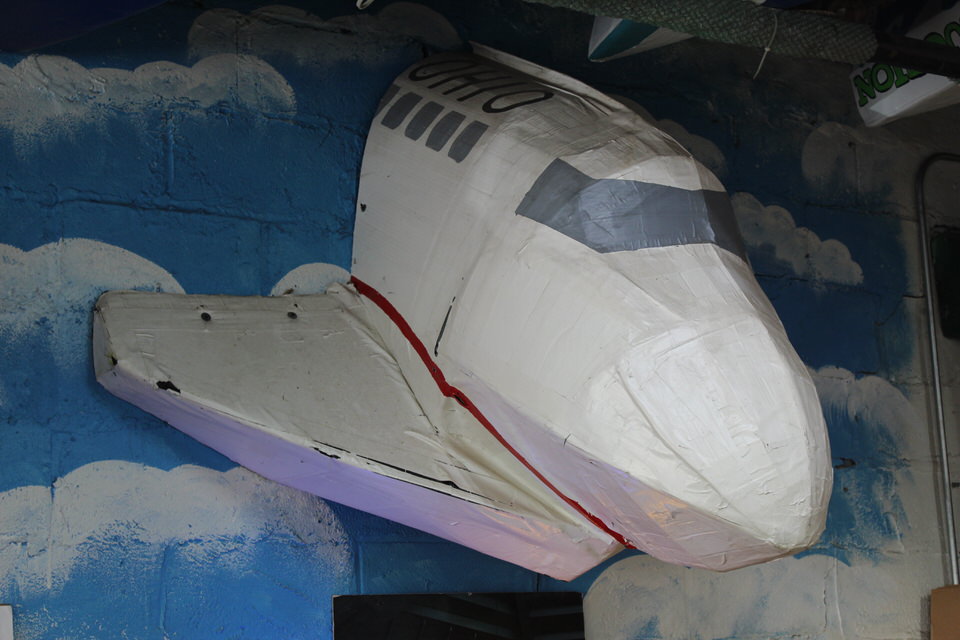 They also build boats that they then sell for their customers to finish.

Here is where the race takes place each year, on the mighty Ohio river.  This is the bank that they line all the boats up on.  The race is a family and all age friendly event and everyone we were told leaves with a big smile. 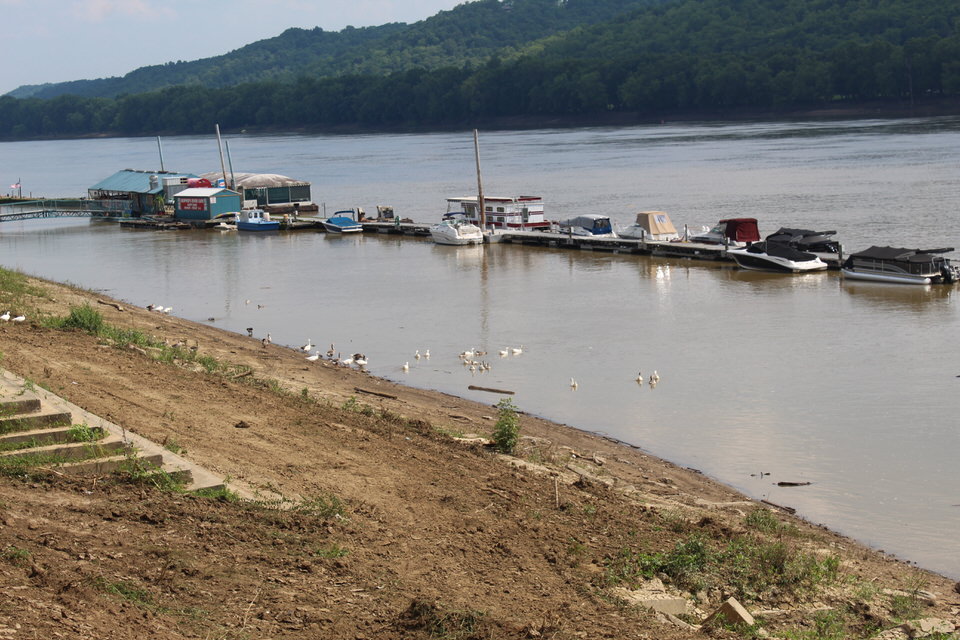 Believe it or not, people really do come from all over both to see the museum as well as race each year in the annual regatta. 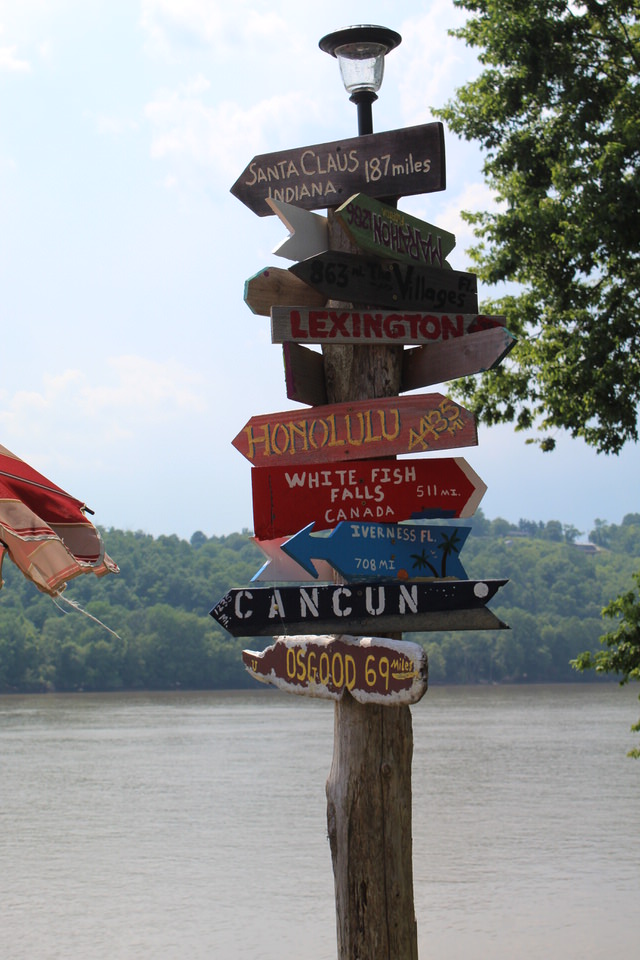 Finally, some of the more colorful signs on the back patio wall. 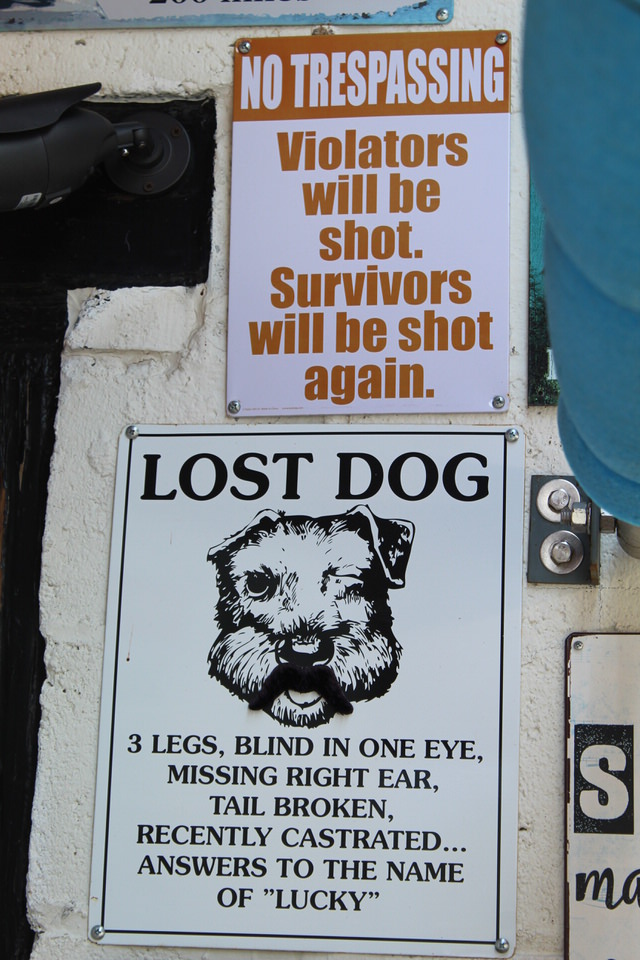 A different type of museum for sure but one we’re glad we made a point of visiting.  Come on now, how many days do you run across a cardboard boat? Really, that’s what makes this life so wonderful and exciting, one never knows what they are going to find as they journey around this great country of ours.

That was our day on The Road of Retirement.  We no more than walked out of the Museum and our phones began screaming out warnings about severe weather in our area.  They weren’t kidding.  The heavens opened up, the wind began to scream, the rain started coming in horizontal sheets.  Would we make it back home in time to save the patio awning?  We were thirty five minutes away.  Thankfully, we did.  Disaster averted by just minutes.

Thanks for coming along again today, we enjoyed your company.  Catch you tomorrow.

One thought on “TOUR AMERICA 2019: OHIO, THE BUCKEYE STATE”