So far so good in terms of temperature.  We hit 86 degrees today and from here it is only supposed to go down.  I believe we dodged the worse of the heat that everyone else is suffering through.  No complaints from either one of us.

Fifty years ago this week we went to the moon.  Throughout this past week there have been many TV Specials about our accomplishment.  There have been broadcasts from the original control room in Houston.  Much has been said about the Saturn V rocket that made it possible.  By now we all know just how close the whole lunar landing came to being scrubbed because the planned landing site was too rough.  With only 30 seconds of fuel remaining the LEM finally touched down.  There have been replays of that first historic step on to the moon’s surface.

Yet in all of the displays I personalty have viewed and of all the reports this past week that I watched there was never any mention of when Buzz Aldrin took communion on the moon.

This is the story.

For several weeks prior to the mission Buzz and his pastor were struggling to find the right symbol for the first lunar landing.  The two wanted to express their feeling that what man was doing in this mission transcended electronics and computers and rockets.

Buzz recalls that one day while he was at Cape Kennedy he wondered if it might be possible to take communion on the moon as a symbol that God was revealing himself there as well, as man reached out into the universe.  He believed that this would be quite appropriate inasmuch as many in the NASA program believed and trusted that what they were doing was part of God’s eternal plan. 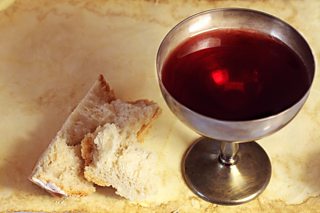 He knew he could carry a bit of bread in a plastic packet.  And the wine would be carried the same way.  There would be just enough gravity on the moon for the liquid to pour.

What about a cup or chalice?  He spoke with his pastor again and he found a small, graceful silver cup.  It was light enough that Buzz could take it as part of his personal items in his personal-preference kit.

Plans were now made for two communion services.  The first would be held at his church just prior to Buzz leaving for Cape Kennedy.  The second would be weeks later when he and Neil Armstrong were scheduled to be on the surface of the moon.  At that time his church back home would again gather for communion with Buzz taking communion inside the lunar module as close as possible to the same hour that the congregation was.

Buzz next puzzled over what would be an appropriate Scripture passage to read prior to his taking communion.  He decided that John 15:5 would be perfect.  He wrote the passage on a slip of paper to be carried aboard Eagle along with the communion elements. His pastor would read the same passage at the full congregation service held back home that same day.

The first communion service was held at the church with just Buzz and his wife and their oldest boy as well as their pastor and a few close friends.  On the communion table were two loaves of bread, one for the immediate service the other for the lunar communion service in two weeks.  There were also two chalices, one of them the small cup the church was giving Buzz to take to the moon.

Communion was served.  At the end of the service Buzz’s pastor tore off a corner of the second loaf of bread and handed it to Buzz with the tiny silver chalice.  Within hours Buzz was on his way to Cape Kennedy.

The rest is history.  Sitting atop the Saturn V rocket they blasted off to the moon.  He recalls that it was a rough ride at first but soon things settled down.

On the day of the moon landing the LEM separated from the command module.  With just seconds of fuel left they touched down at 3:30 pm.  After their scheduled meal time it was now time for communion.

Buzz unstowed the elements in their flight packets. He put them and the scripture reading on the little table in front of the abort guidance-system computer.  Then he called back to Houston. 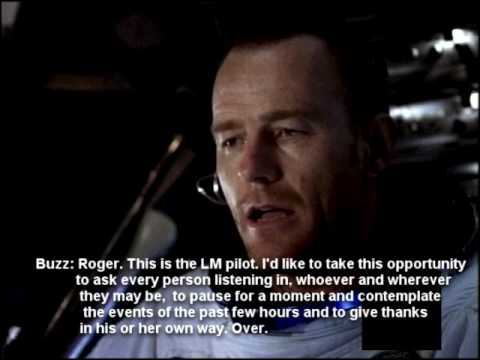 In the radio blackout Buzz opened the little plastic packages which contained bread and wine.  He poured the wine into the chalice his church had given him . In the one-sixth gravity of the moon the wine curled slowly and gracefully up the side of the cup. It was interesting to think that the very first liquid ever poured on the moon, and the first food eaten there, were communion elements.

Before he partook of the elements he did one more thing.  He read the words of Scripture he had chosen to indicate that he believed that as we man probed into space we were acting in Christ.

So why haven’t we heard more about this?  Does the name Madalyn Murray O’Hair ring a bell?  She was once dubbed “the most hated woman in America” for her high-profile activism on behalf of the separation of church and state.  She had already sued NASA because earlier astronauts had read words of Scripture from Genesis.   Though the case was ultimately dismissed NASA was afraid of another case should the communion service be publicly broadcast.

Now we all know how Christ was honored on the moon.

That was our day on The Road of Retirement.  We had another wonderful day.  We spent a few minutes with mom.  I was able to service our water system:  change filters, back flush and regenerate our water softener.  All in all just another beautiful day that we did our way, traveling along, singing our song, hand in hand.

Thanks for coming along, we appreciate your company.  Catch you tomorrow.