Huntsville, Alabama – Rocket City & Putting A Man On The Moon

Talk about a drastic change in weather.  One day it’s 86 degrees and today it is 65 degrees.  In addition the sun is long gone and now once again we have rain aplenty.  Ah well, such is life.  It is supposed to clear out by tomorrow. 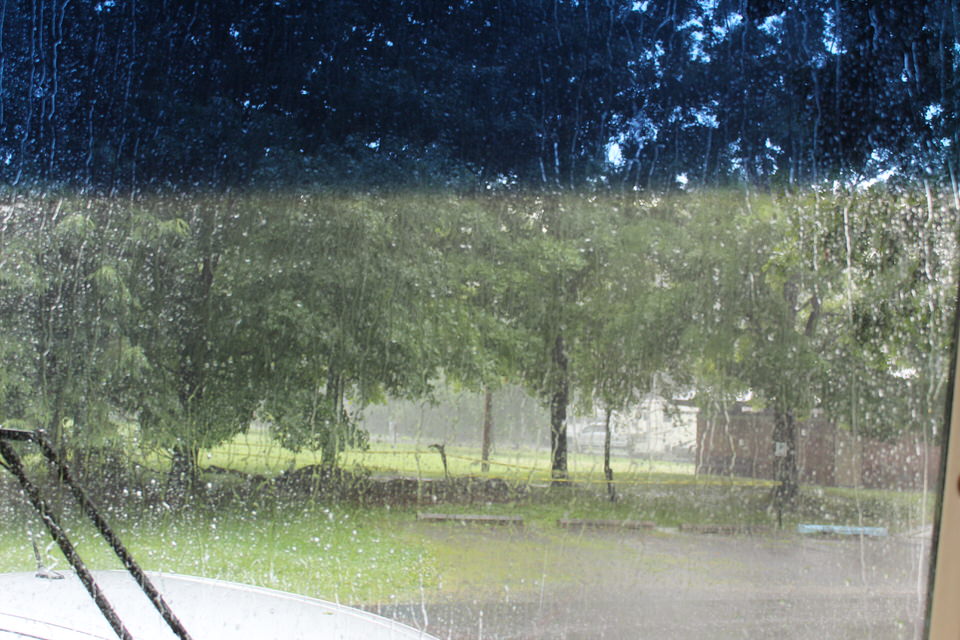 Yesterday we played hide and seek – with mom’s hearing aids.  She called all in a panic saying she couldn’t find them.  She had looked everywhere.  Off we went to help in the search.

Once there we began to search.  She claimed that she had put them in her top dresser drawer.  First, we emptied it out on the bed.  Just like mom had already done.  Nothing.  Well, we looked hi and low, even in the garbage and a hundred and one other places.  No luck.  Then that little voice in my head that has spoken to me in the past said They’re in the drawer where she said she had put them.  Mind you we had taken that drawer out at least several times and gone through everything in it with no luck.

I went back again to the drawer, emptied it out on the bed – like we had already done numerous times.  I began to go through each piece of clothing, one by one.  There in the last pair of unmentionables was a small piece of tissue with the hearing aids in it.  Well I gave them to mom and told her I was going to frame her pair of unmentionables and mount them on the wall.  She doubled up with laughter.  It was good to see her finally relax.

Time to get her out of the apartment.  We brought her back to the rig for supper.  Barbara made a delicious meal of potato pancakes and meatloaf.  Mom outdid herself with what she ate.  It was good to see her relaxed, laughing and eating so much. 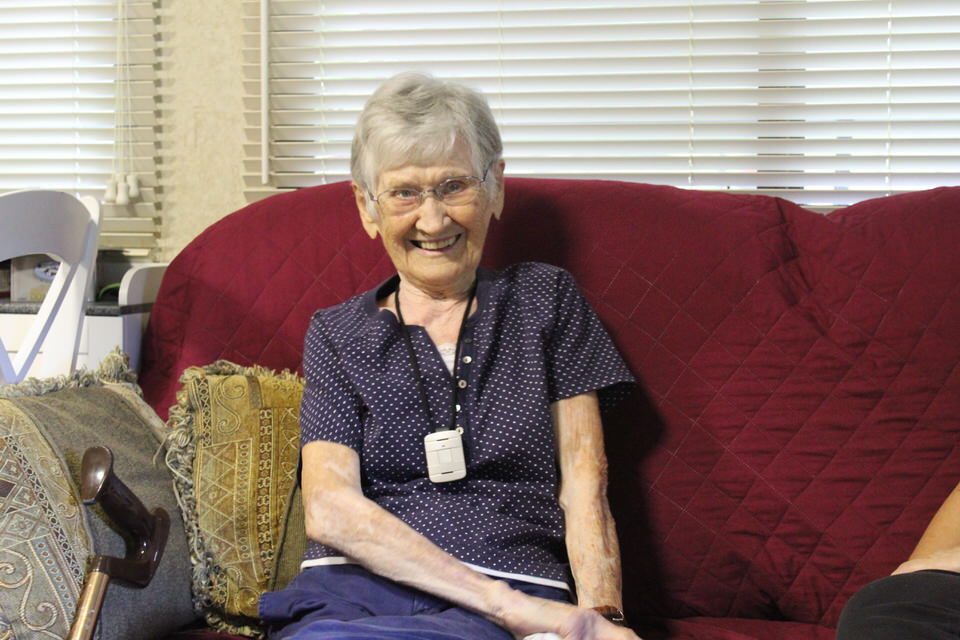 This past week as a nation we celebrated our mission to the moon.  Mindful of that I thought I’d share with you our trip to the Space and Rocket Center in Huntsville, Alabama sometime back. 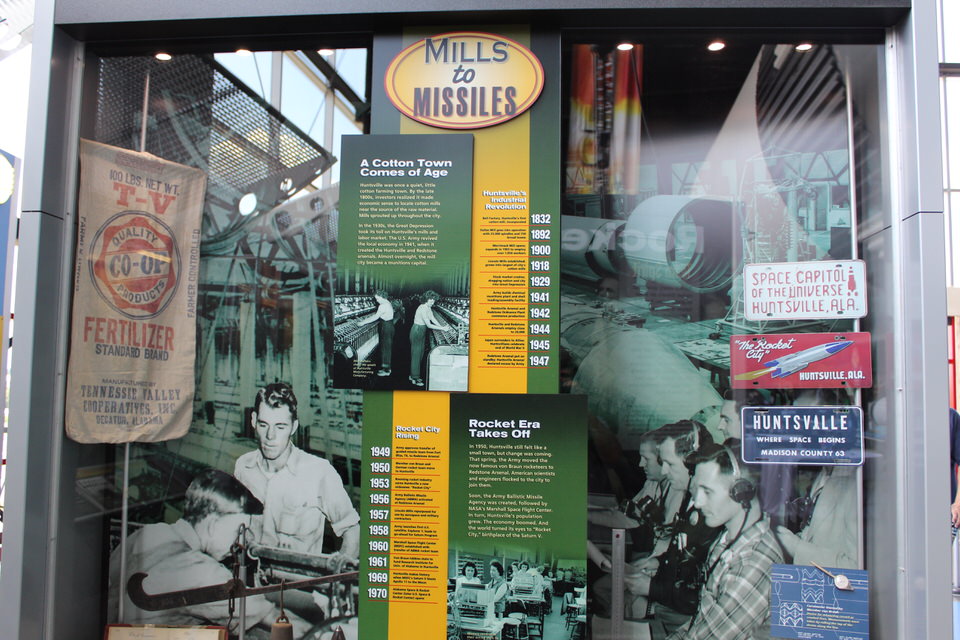 This is where the story of the Saturn V, the rocket that took us to the moon began.  Huntsville would become known as the birthplace of America’s moon rocket. 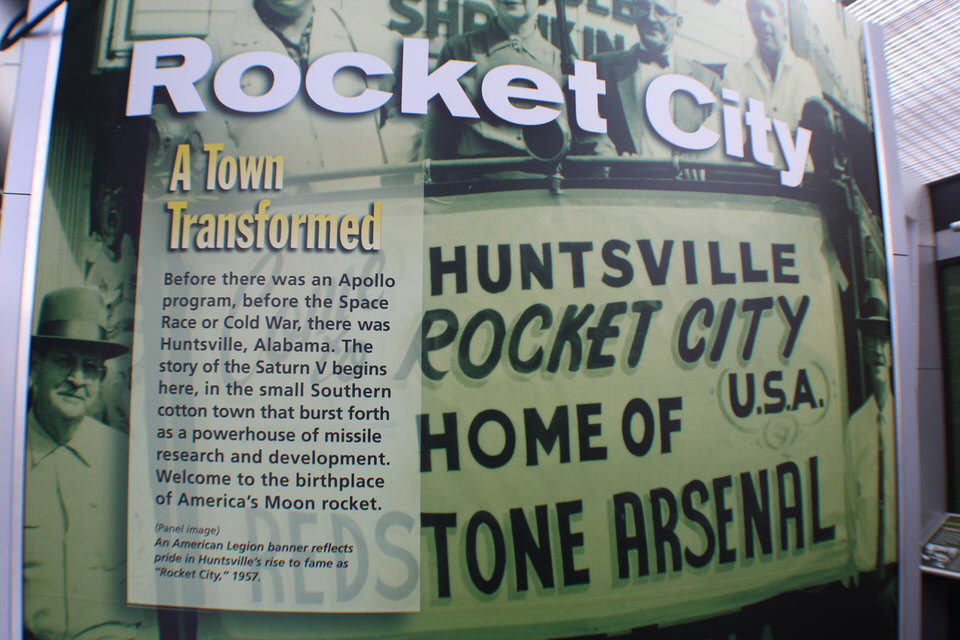 Huntsville would forever be known as the The Rocket City.

But what brought about the need for such a rocket?  Why were we going to the moon at all?  You don’t have to be a space nerd to know why we went to the moon. In September 1962, President John F. Kennedy gave one of the most famous speeches in American history. The highlights included an ambitious goal and an even more ambitious timeline:

The challenges of doing so, however, were enormous

Then came the Kennedy assassination after which President Johnson embraced Kennedy’s vision and the space race was on in earnest.

What was needed now was an engineer to bring about Kennedy’s vision.  That man would be Wernher von Braun. 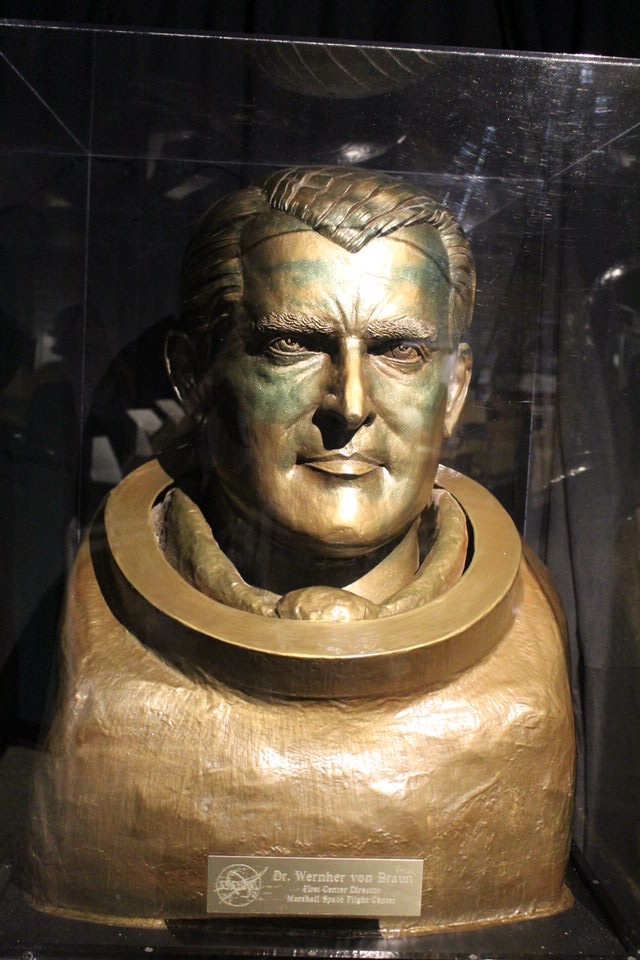 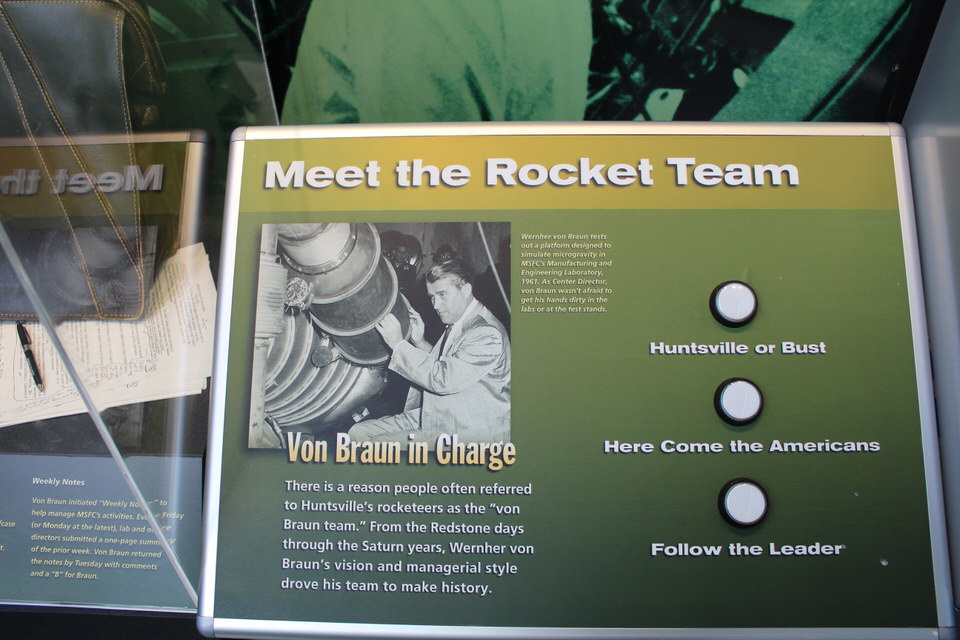 A team quickly assembled around him.

The challenge had been issued.  The team assembled.  Now it was time to do it.

At the time, there was no rocket capable of lifting all of the things astronauts would need—or indeed, the astronauts themselves—for the eight-day round-trip journey. The Redstone rocket that had taken the first American, Alan Shepard, to space was at its core a modified missile. The Juno rocket that had taken the first U.S. satellite to space didn’t have enough thrust to lift the weight of a command capsule, lunar lander, and three astronauts.

Scientists at NASA Marshall had already begun work on a new generation of rockets before President Kennedy’s speech. Called the Saturn project, early Saturn I rockets weren’t powerful enough for a moon mission. They needed a new, more powerful rocket than had ever been built. That rocket would be the Saturn V. 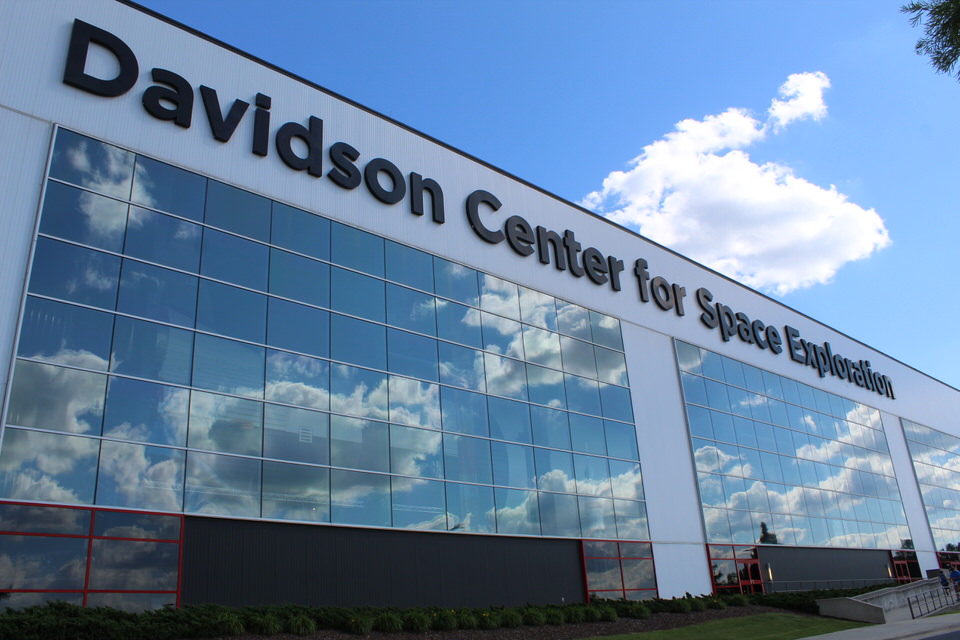 The question now was could such a rocket be built?

Issues arose early on and had to be tackled one by one.  For instance, what fuel would power the Saturn V rocket? 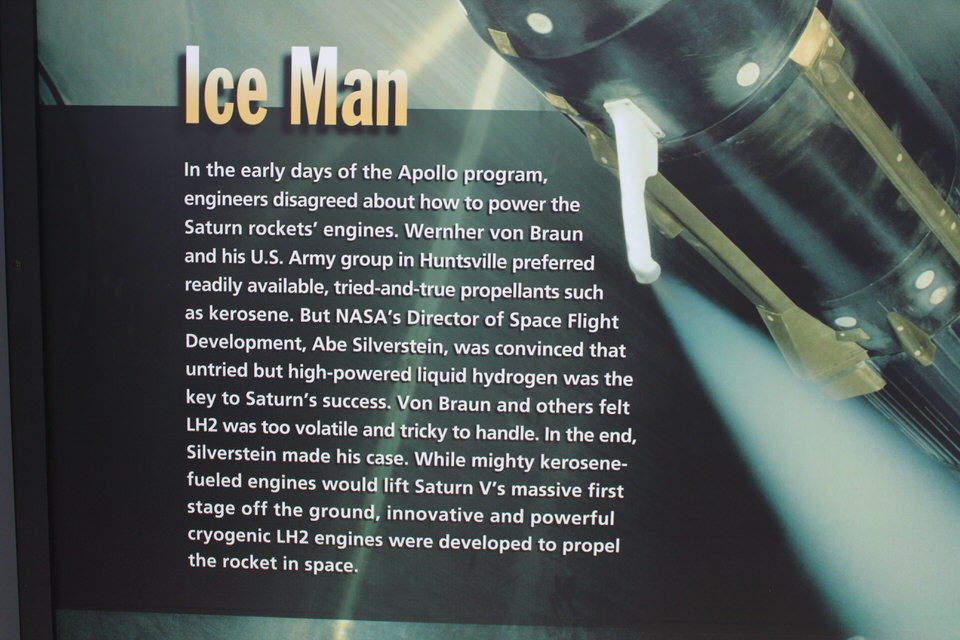 Would there be one huge rocket or a rocket with several stages?  In the end it was decided that multiple stages would be the best. 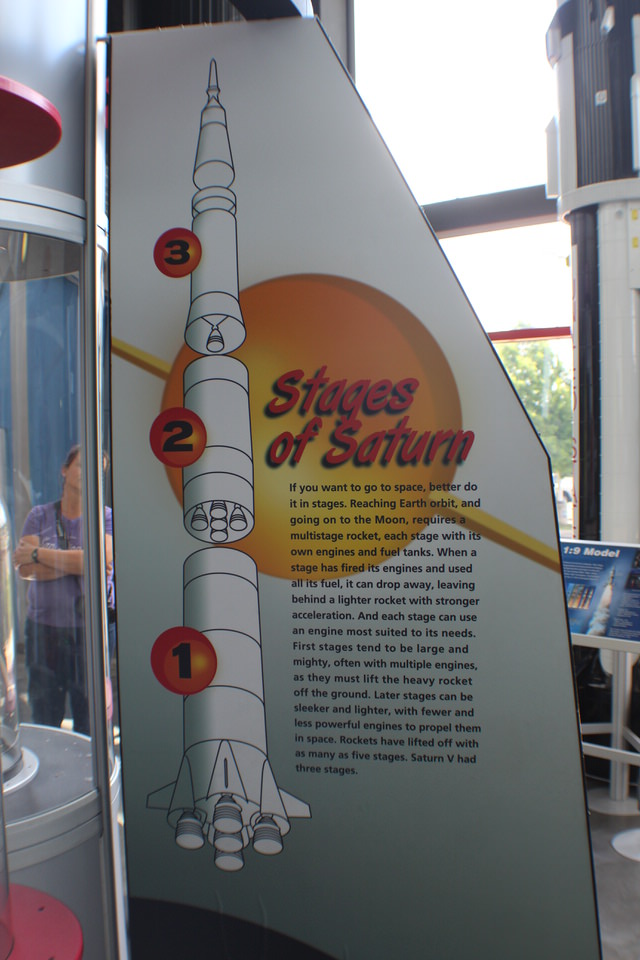 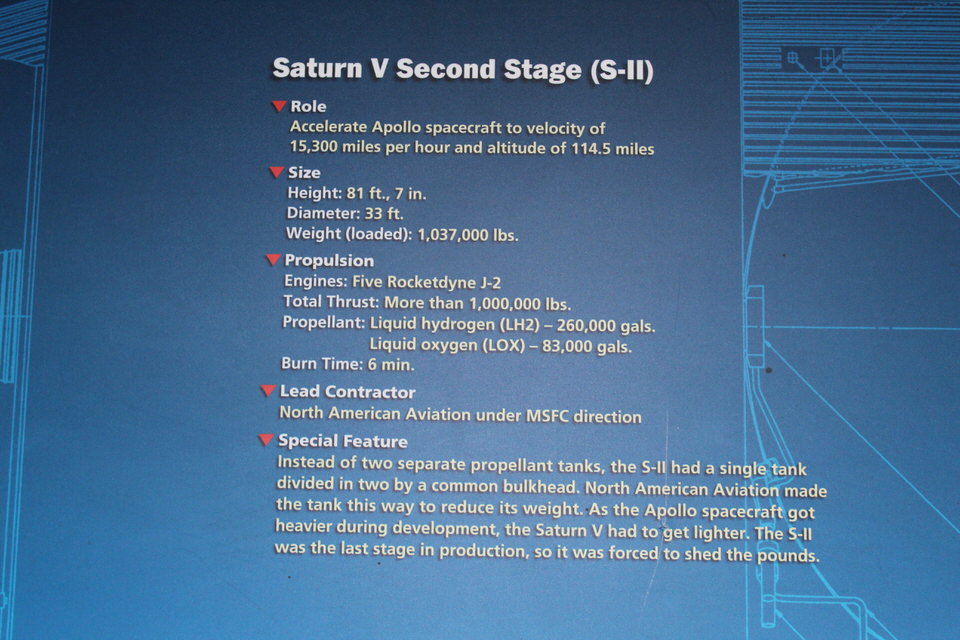 How about the brains that would control the rocket?  It needed to continually answer three questions while the rocket was in flight:  where am I; where should I be; how can I get there. 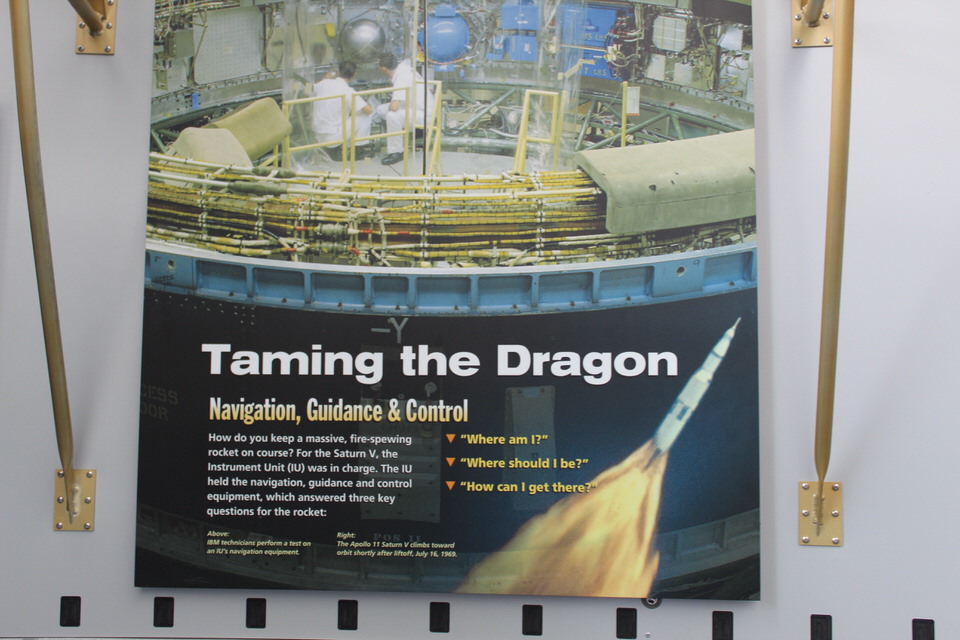 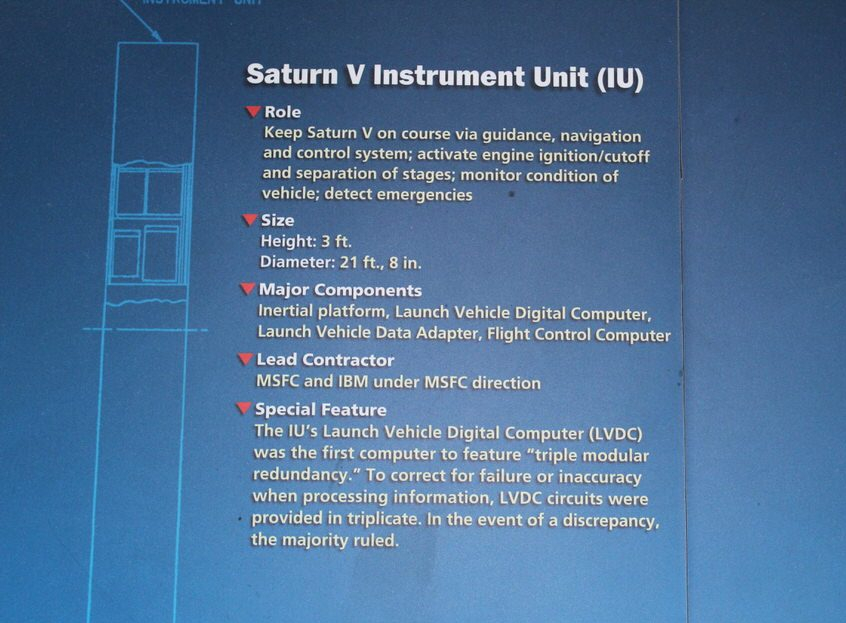 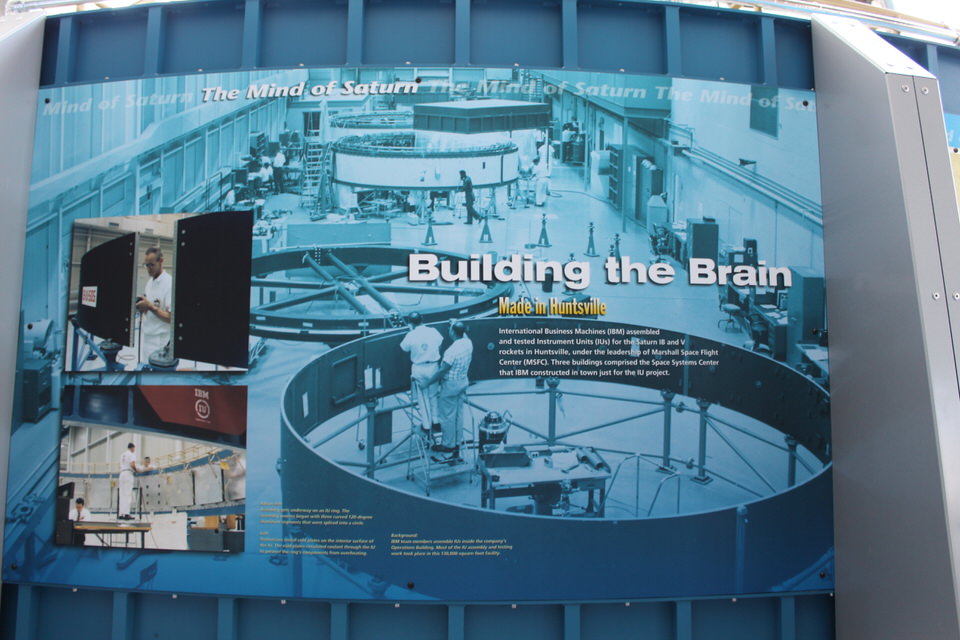 My dad had a long and successful career with IBM so they hold a special place in my heart. 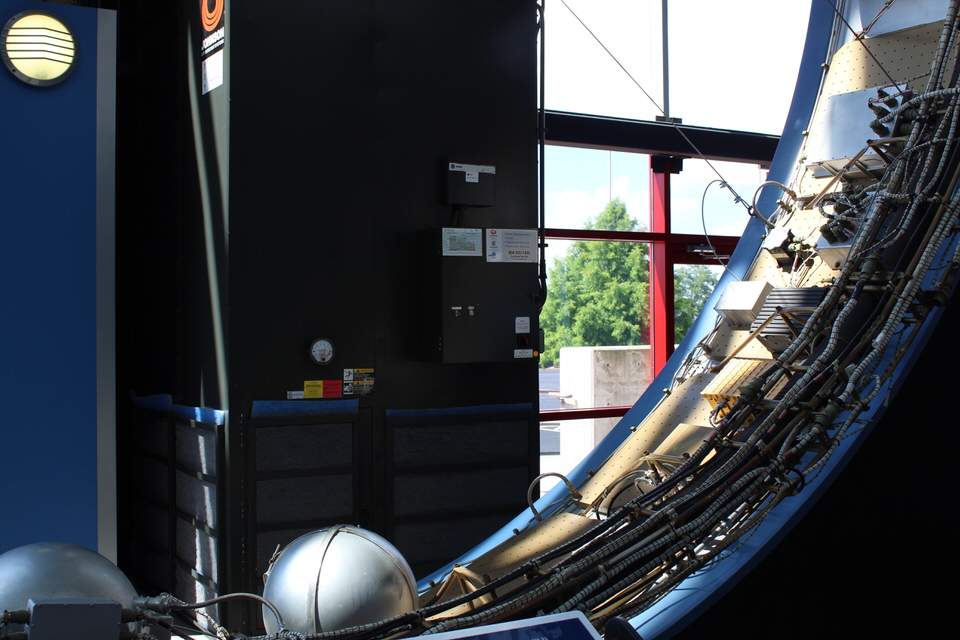 There were of course many, many other challenges along the way.  This though is what the end result was – the Saturn V.  This is a replica of that rocket all 363 feet tall that stands today at the rocket center and serves, and has served, as a Huntsville landmark for 50 years. 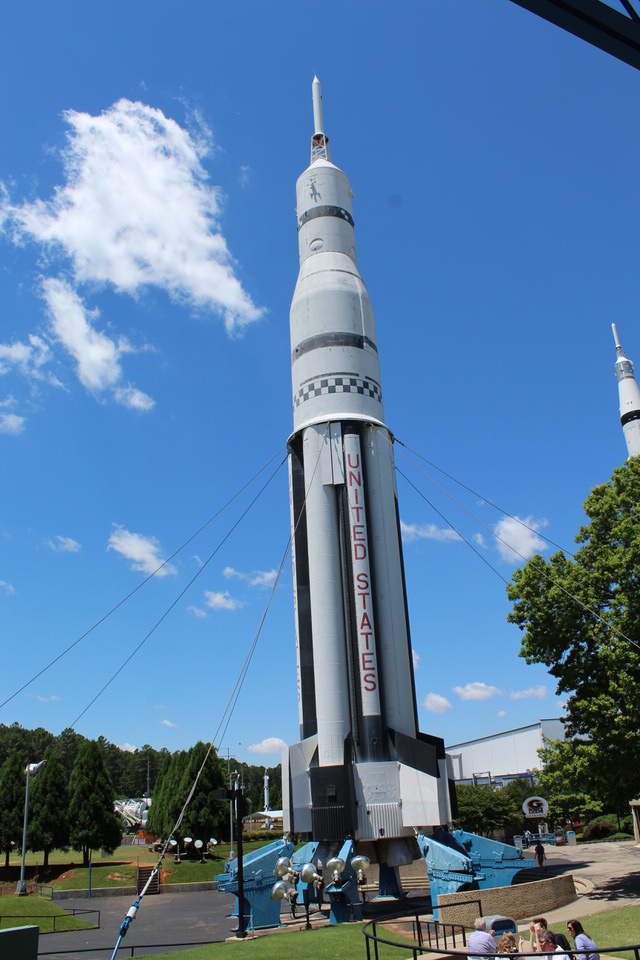 Would it work?  Would it fly?  Would it perform as designed?  The first test it had to successfully pass would be the shake it test.

The complete rocket with all its stages was assembled in this facility.  It then had to endure over 400 hours of dynamic testing to verify that vibrational forces would not shake it to pieces.

The individual engines for each stage were test fired.  These are the first stage engines.  Standing under the five gargantuan F-1 engines it was amazing to believe a rocket this big is real. It’s even more incredible to believe it worked.  When they first test fired the engines in Huntsville they made one mistake.  They forget to consider the weather conditions at the time.  There was a low cloud cover and when the engines were fired the shock wave hit the low cloud cover and rolled like a wave throughout Huntsville shattering windows everywhere in the community! 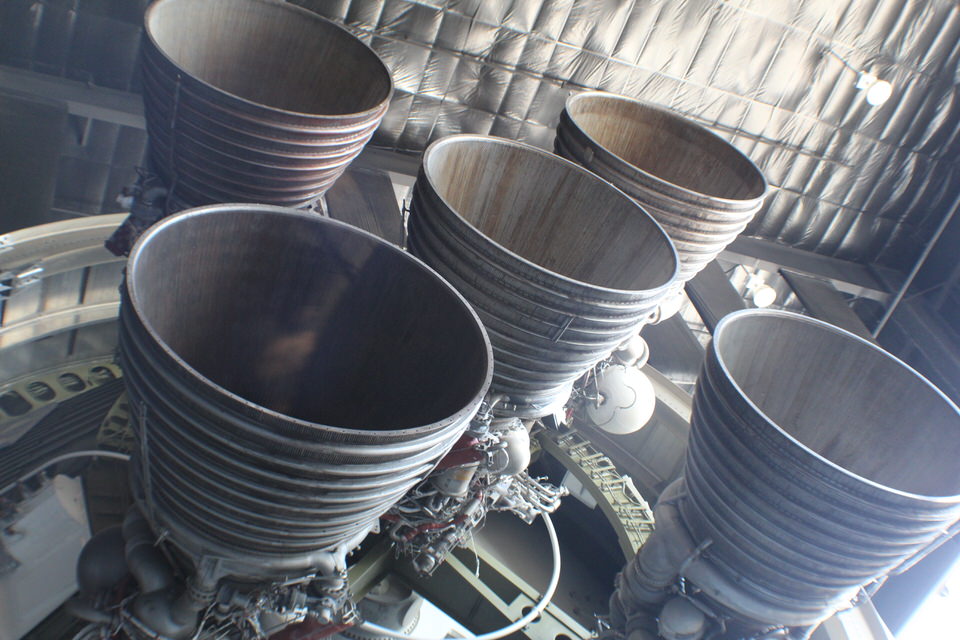 Then there is the Apollo 11 Capsule which consisted of several separate modules. 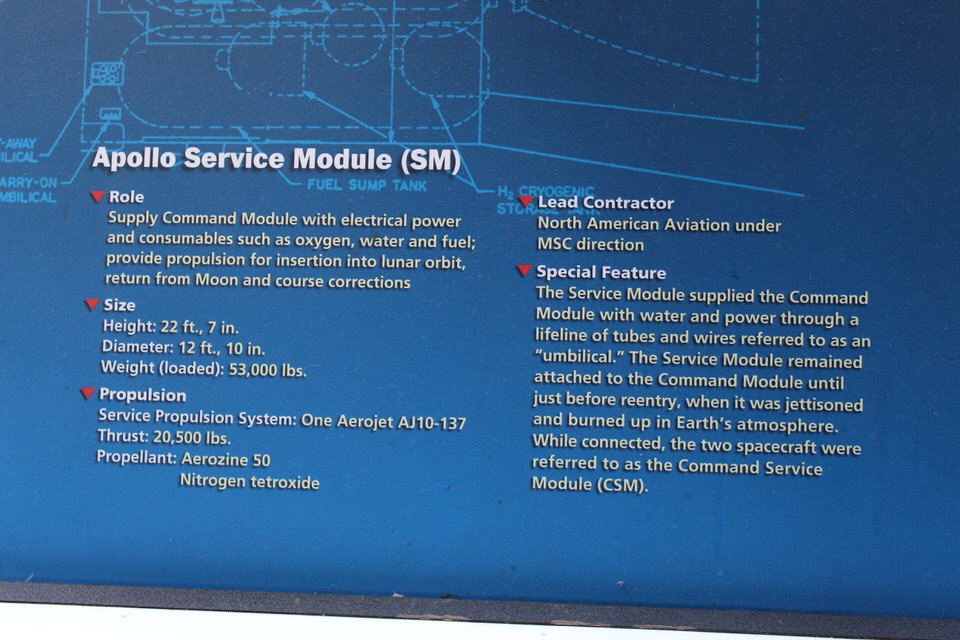 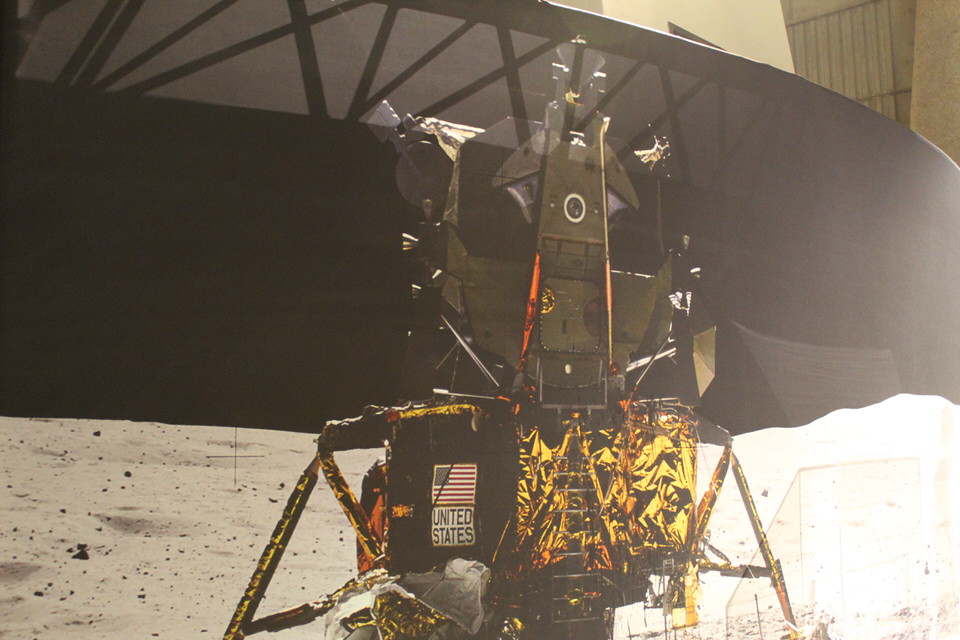 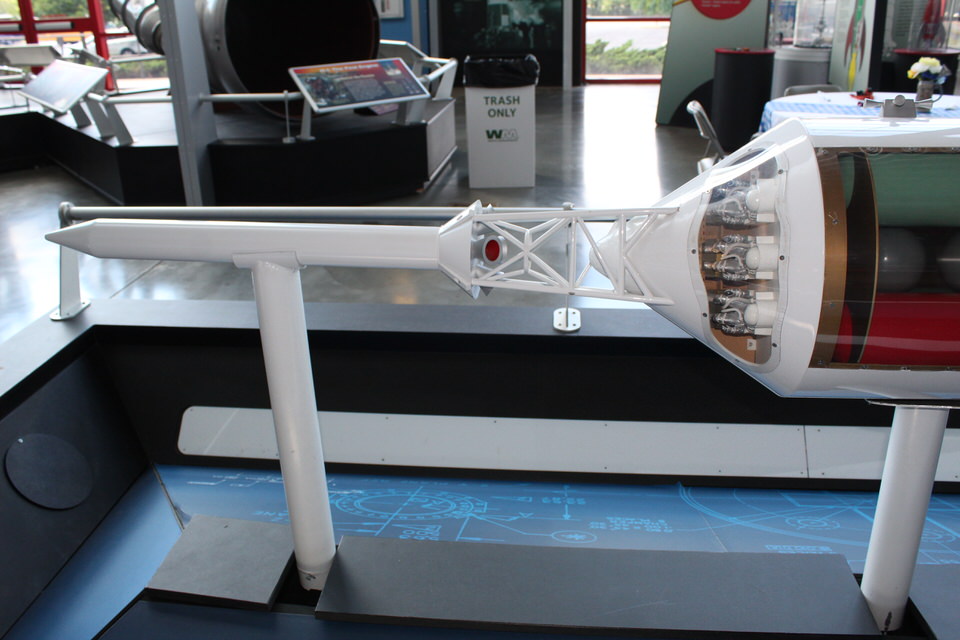 This is a model that represents the two vehicles that took the astronauts to the moon and brought them back safely. 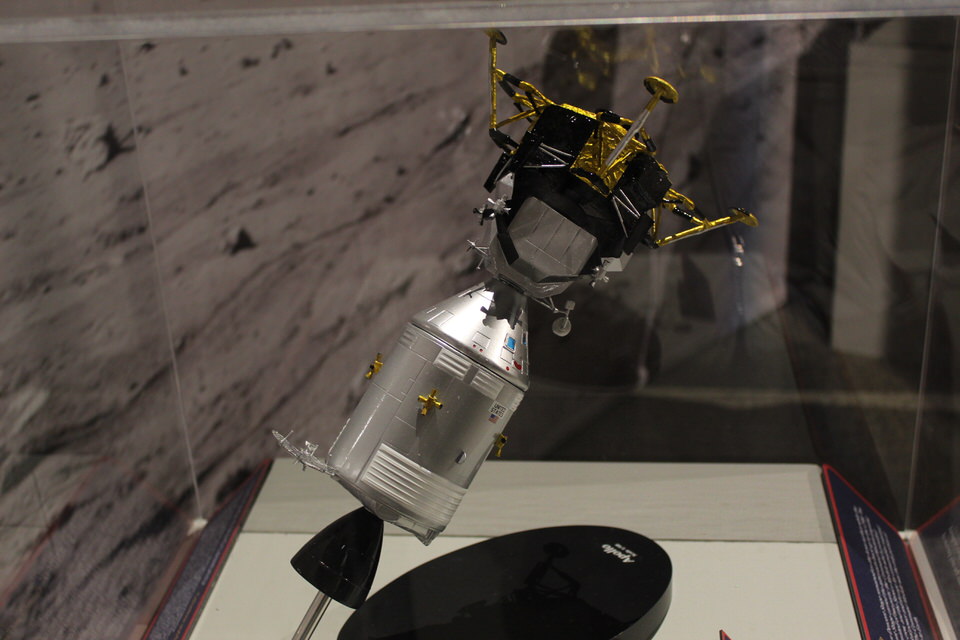 Finally, all was ready.  Time now to go.  The launch would take place from Launch Complex 39 at the Kennedy Space Center in Florida. 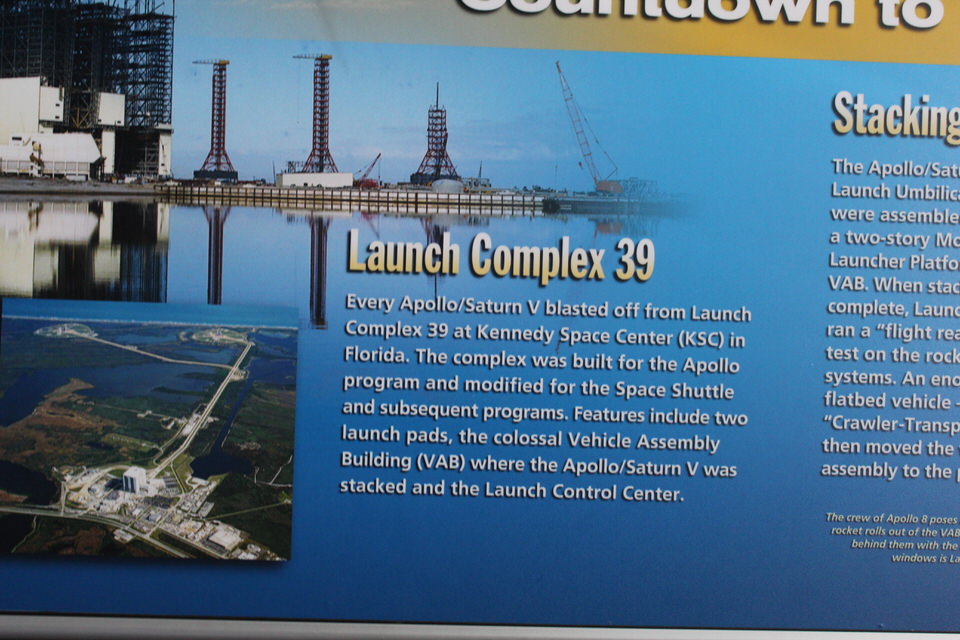 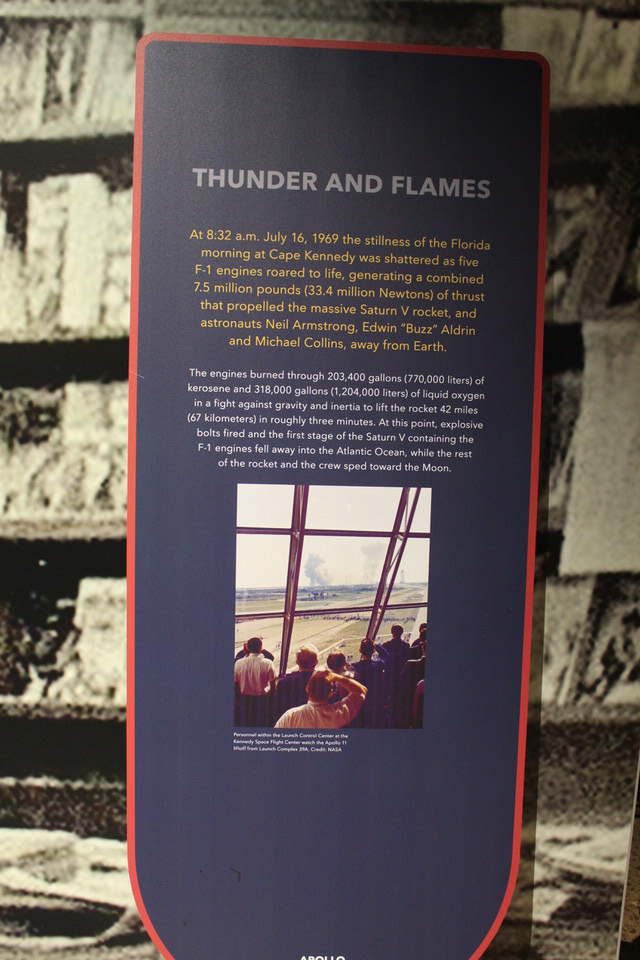 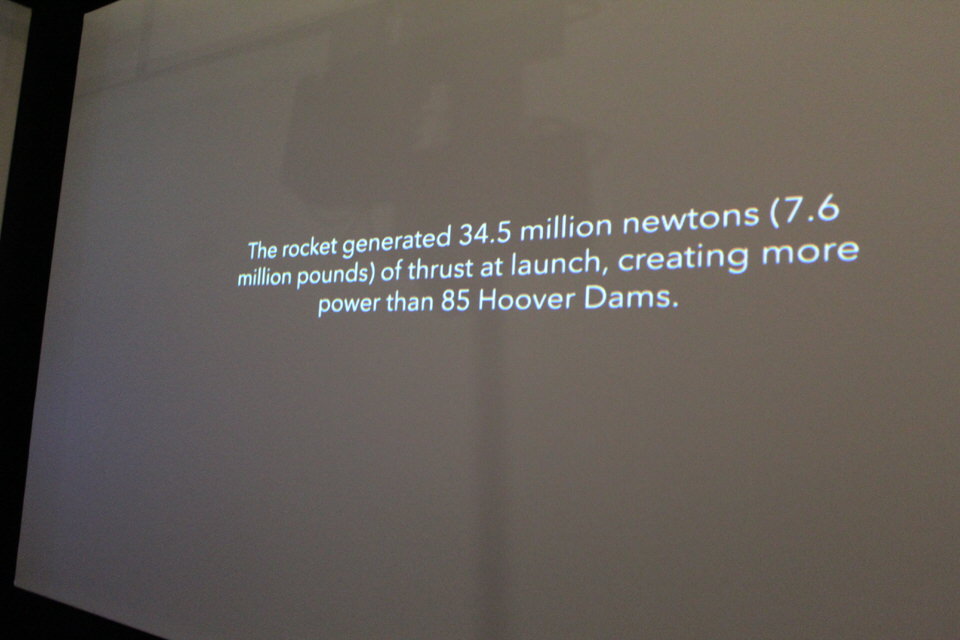 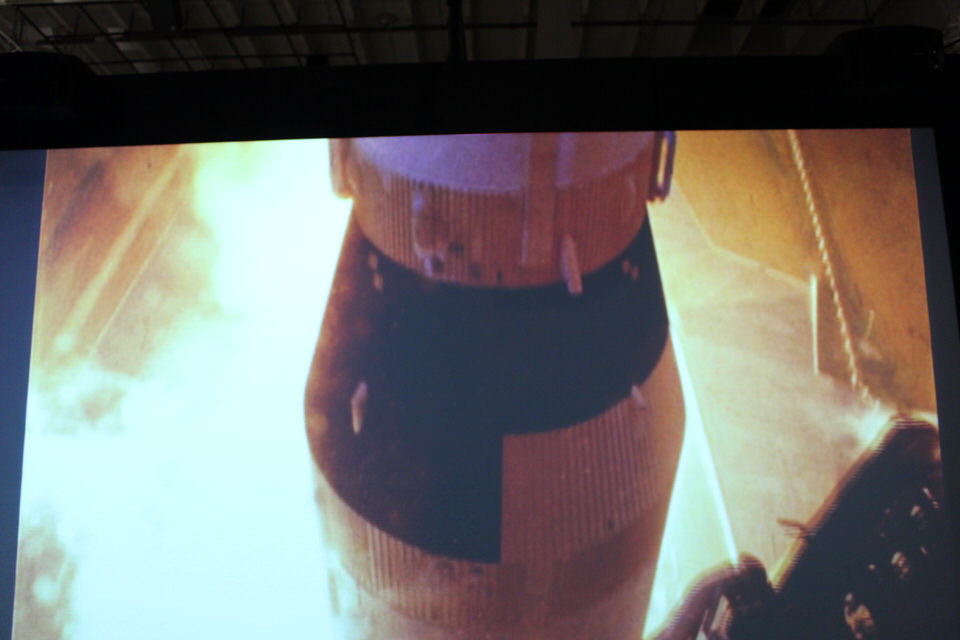 One more interesting note.  That first moon landing almost didn’t happen because the computer had picked a spot where the LM could not land.  Armstrong saved the day.

In the end over 400,000 individuals and several different facilities were responsible for this memorial day.  Armstrong had this to say while on the moon: 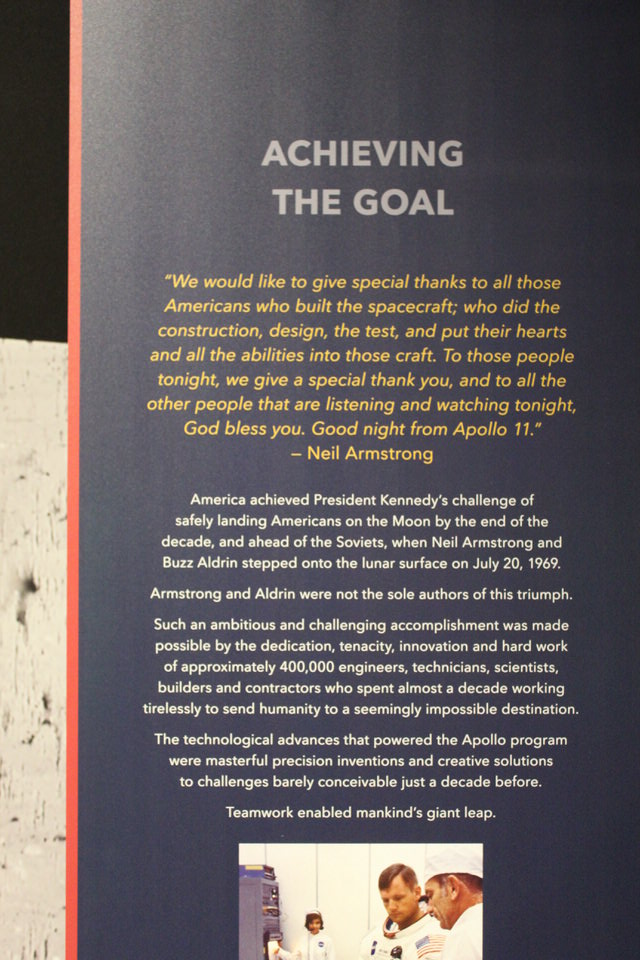 This, in part, was our day at the Rocket and Space Center.  While there we also took a tour of the Marshall Space Center which time and space does not permit me to include at this time.  My advice, put this on your bucket list of places to visit sometime in the future.  Just don’t expect to see it all in one hour – allow a full day.  You will not regret it.

Our wet, very rainy, and definitely cool day on The Road of Retirement has come to an end.  A blog was written, naps were taken, and we just slowly ambled through the day.  Overall, another great day spent together.

Thanks for joining us, we always enjoy your company.  Catch you tomorrow.