Home Is Where We Park It:  Elkhart Campground, Elkhart, Indiana

Pray for comfort for those who lost loved ones

Pray for healing for those who have been injured

Pray for comfort for those who have been traumatized by the violence.

Back to the Museum and our tour of the RV Founders Hall, Say Hi to Barbara as she prepares to head in.

Time to travel down memory lane.

We’ll begin with a 1929 Wiedman Housecar.  The body of a Wiedman Housecar was built in upstate New York, and then shipped to a purchaser for self installation, or to the factory to be installed by them on the buyer’s chassis of choice.

A driver’s seat was a $35 option, but apparently any comfortable chair would do.

The one bed is oriented front to back, pillow in the back.

The large panel on the drivers side was for a additional canvas covered fold down bed.  As of now it is bolted in place and cannot be opened.

This is the 1931 Mae West Housecar.  In 1931 Paramount Studios presented this custom-built House Car to Mae West to entice her to leave Vaudeville and join Paramount to make movies. Mae West used this housecar for several years as transportation between her home or hotel and shooting locations.

This Housecar was designed as a chauffeur-driven lounge instead of a camper — it features a small hot plate, icebox and a small table to enjoy a meal.

Mae West had a rocking chair on this back porch to enjoy fresh air when she had the opportunity.

This is a 1933 Ford Kamp Kar.  Henry Ford introduced the V8 in 1932, so this is one of the first housecars to be powered by a V8 engine.  The Kamp Kar was built by Walter Runkle, a home builder who created these custom vehicles for local customers from 1915–1940. This particular example was used from 1933–47 for yearly winter trips from Illinois to Florida.

Now we come to Covered Wagon.

This is a 1929 Covered Wagon Travel Trailer.   It was this design that gave the company its name.

This is a 1935 Covered Wagon Travel Trailer.  The exterior is leatherette over a thin plywood wall and the roof is coated canvas stretched over tarpaper. 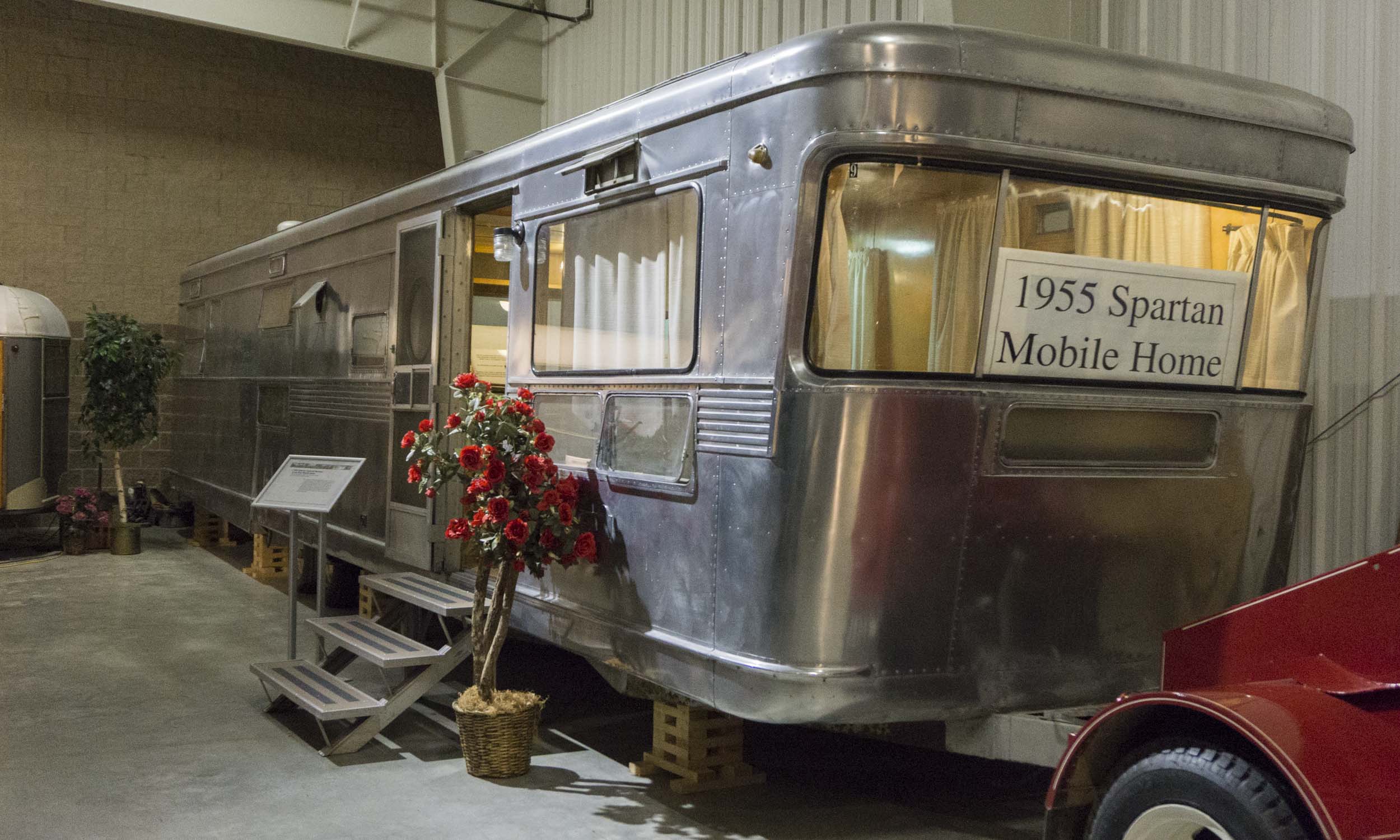 The Spartan featured an all-aluminum exterior with aluminum wall studs and an all-birch interior.

This is a 1955 Ranger Crank-up Tent Trailer.  Less than 200 of these pop-up campers were built, and this one has customized upper bunks that fold down when the roof is lowered. This design was the first use of fiberglass in a trailer body.

Ranger was the first brand to use the term “slide-out” to describe the extendable section which provided space for the rear bed.

This is a 1966 Mustang Travel Trailer.  The Mustang was one of the first travel trailers to feature a “bunkhouse” design that incorporates a second-story bed layout.

The upper bunk is behind that big brown wall and is accessed thru a walkway on the left in the picture.

This year and model also marked the first year that RV’s began to incorporate built in bathrooms and showers on a wide spread basis.  At first most were wet baths.

This is the beginning of the Class C Motorhome.  Up until now most truck campers slide into the truck bed in the back.  This is 1969 Sites Truck Mounted Camper required that the truck bed be removed and the camper was permanently mounted to the front cab portion.

Now we come to Airstream. 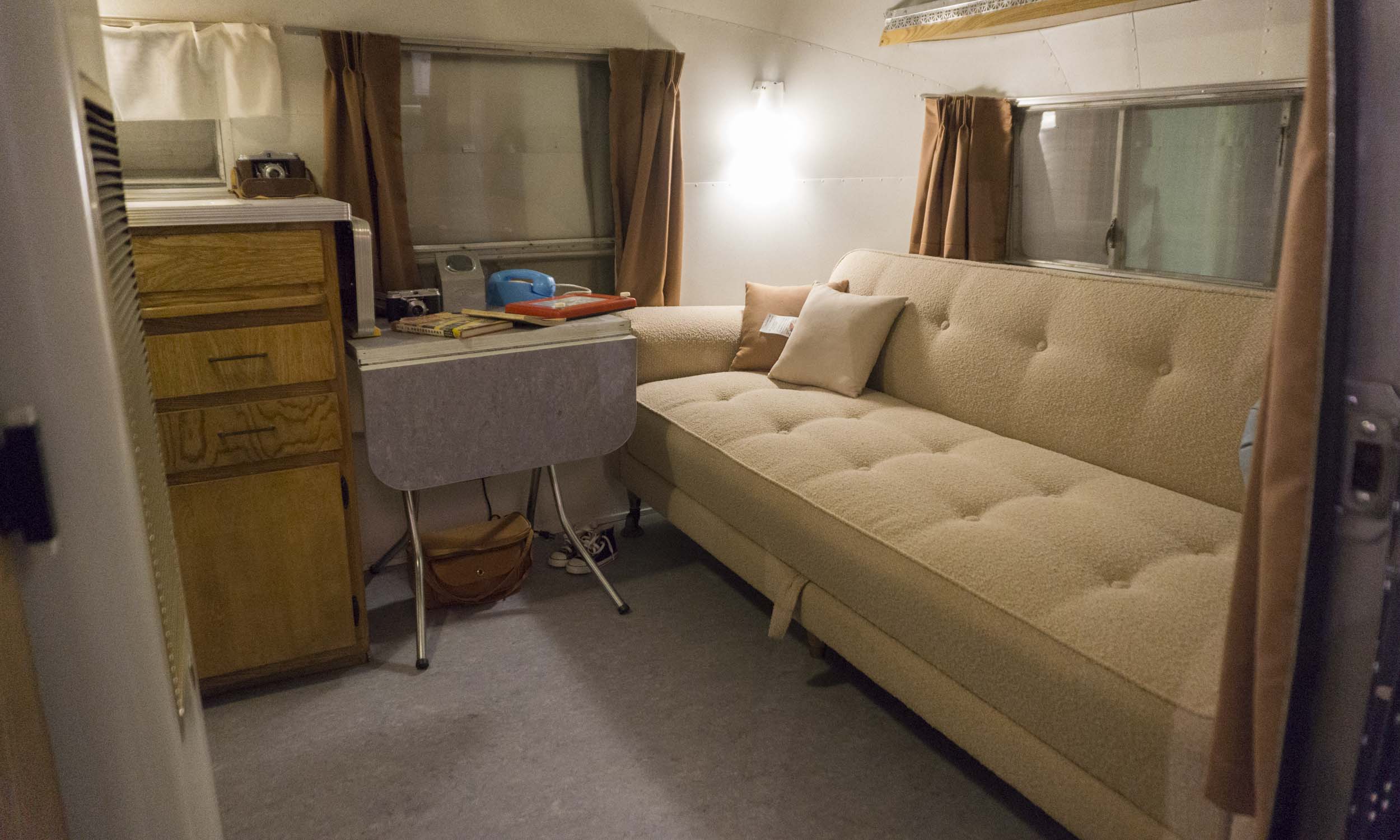 We move now to Coachmen.  This 1964 Coachmen Cadet Travel Trailer is the first production trailer from Coachmen.

The Cadet features a unique bed stowed up against the ceiling, and is manually lowered into position above the dinette when ready for use. 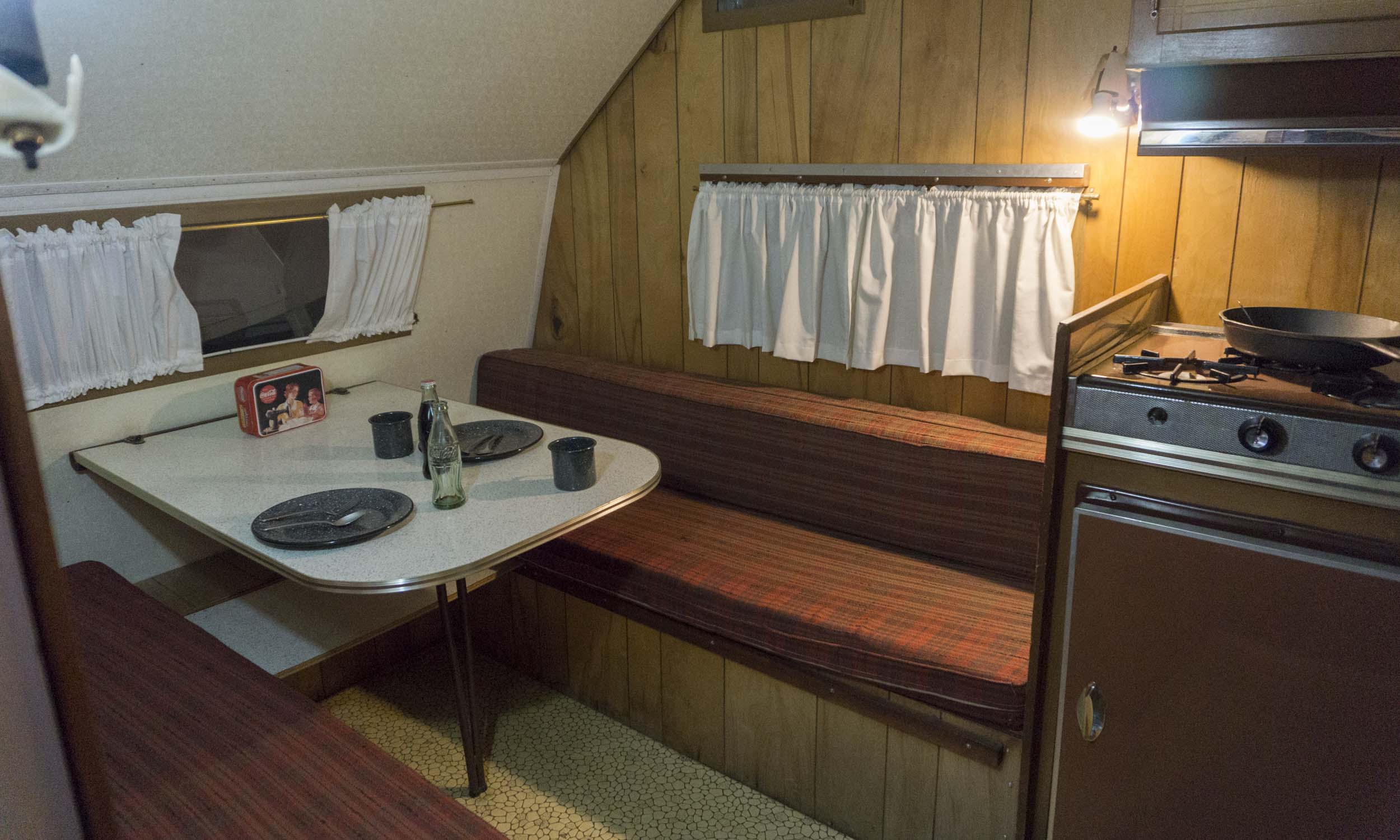 This is a Coachmen that has gone the distance.  This is a 1978 Leprechaun that was purchased in 1979.  This RV was used for 24 years by four generations of one family.  It has traveled through 48 states and 9 Provinces of Canada.  In 2013 it was donated to the museum with over 64,000 miles on the odometer.

Now we come to Fleetwood.  This is the 1950 Fleetwood Sporter.  This travel trailer marks the beginning of Fleetwood Enterprises.

This is Fleetwood’s first motorhome.

This is the 1985 prototype for the Fleetwood Bounder.  When it was released in 1987 it was the first motorhome to offer basement storage.

Moving on to GMC.  They built motorhomes from 1973 to 78.  Though no longer in production it was considered a fresh new approach to RV’s.  This RV features a front-wheel-drive system from a Cadillac Eldorado as well as an airbag suspension system for better ride and handling — an advanced feature for its day.  The story goes that the corp brass killed continued production of it because they didn’t believe there would be a continued market for it.  Today it is one of the most sought after vintage motorhomes for restoration.

This is a 1974 GMC Motor Home. Keep in mind the following pictures for right after this you’ll see a full on restoration of one of these RV’s.  A restoration, unfortunately, that went terribly wrong. 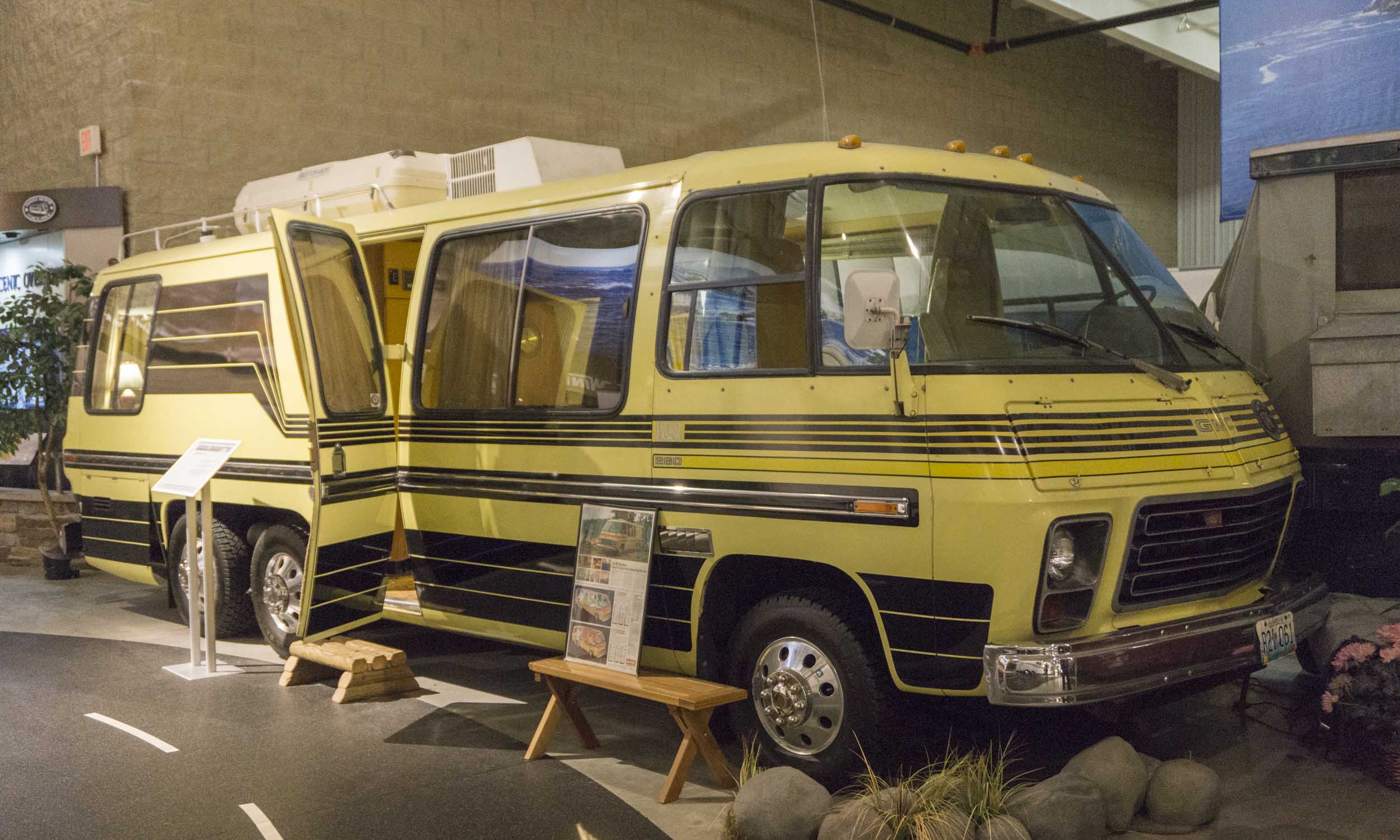 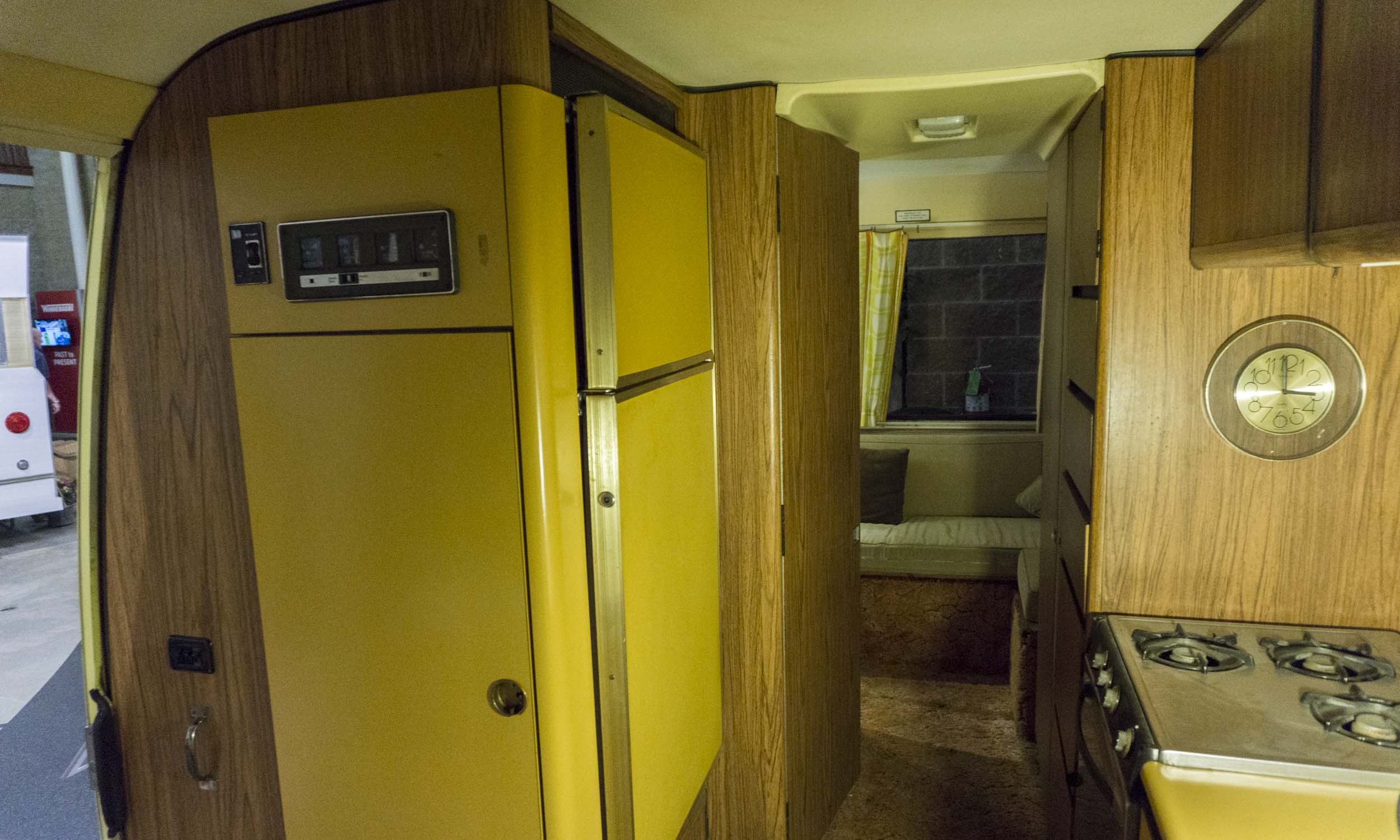 Now for that restoration that went wrong.  This is a 1977 GMC Motor Home
It may look great now, but this GMC motorhome was discovered parked next to a dumpster with flat tires, a rotten awning and animals living in the wheelwells. Bob and Janet Prince sold their 45 foot Prevost and then socked more than $500,000 into restoring this RV beyond its original form to be a fully modern recreational vehicle.  The paint job alone cost over $10,000. 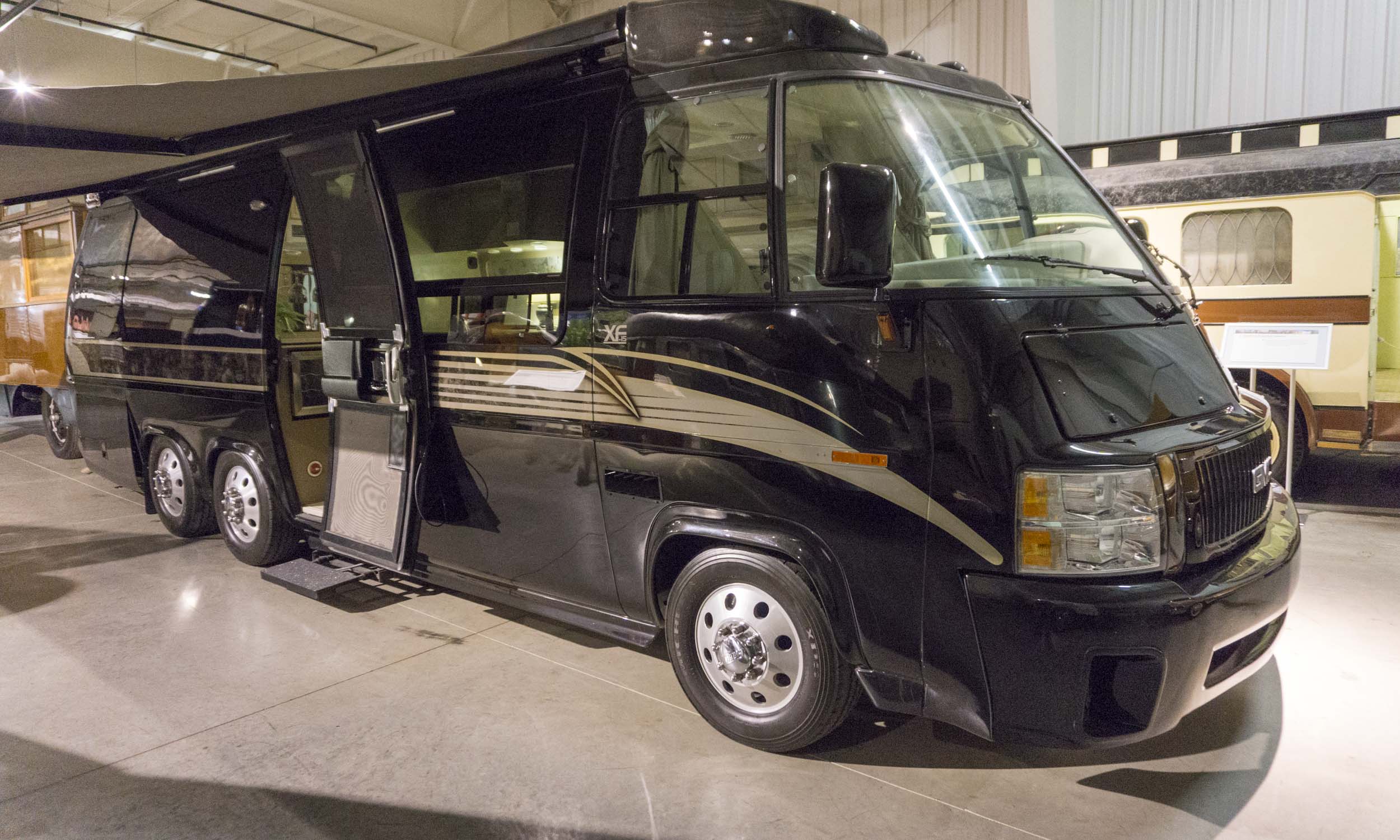 I climbed up in the captain’s chair, up there you really do feel like the captain of your ship!  Comfortable beyond all belief.  What an impressive view out the front windshield.

The couch converts into a bed. 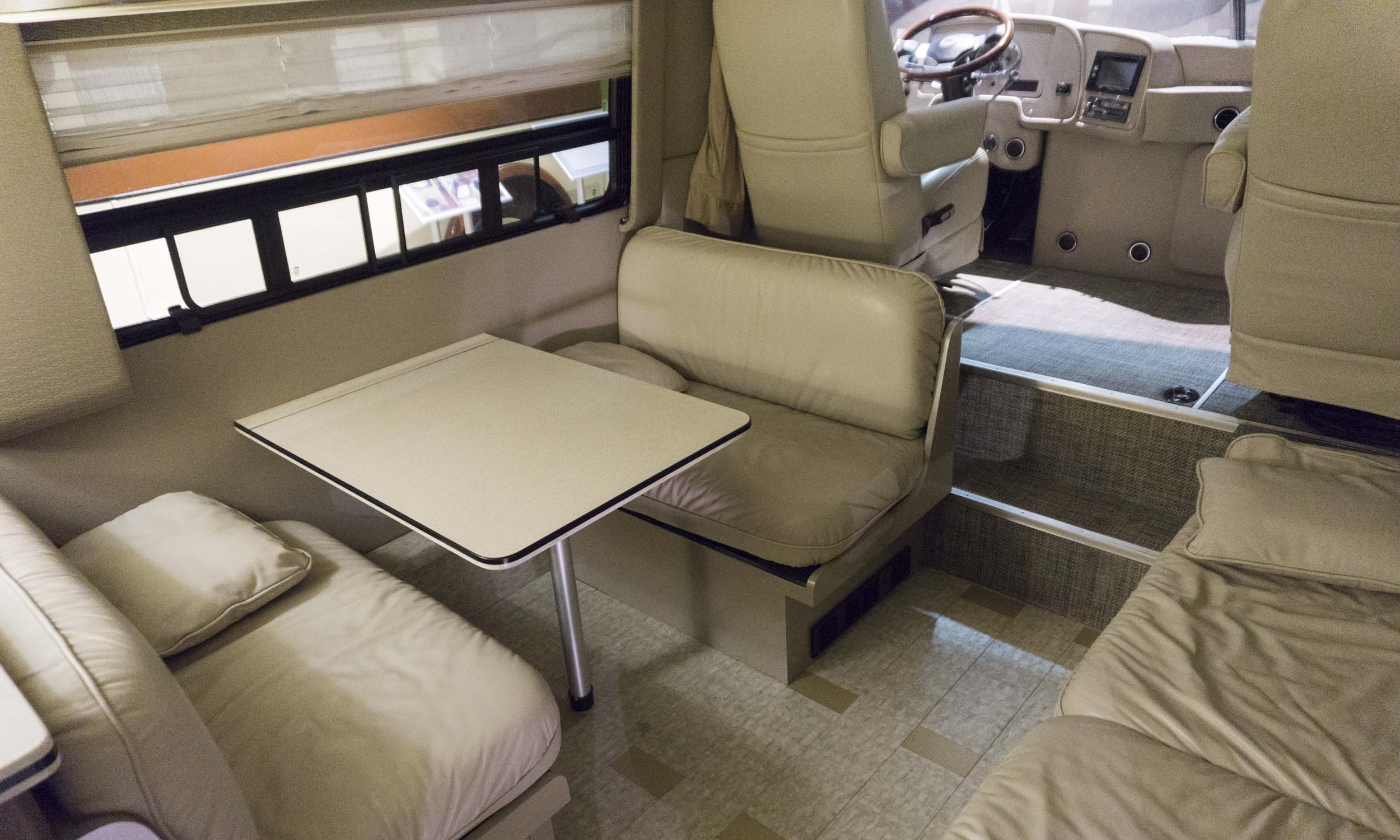 A separate storage space for your wine glasses.  It also has an induction cook top. 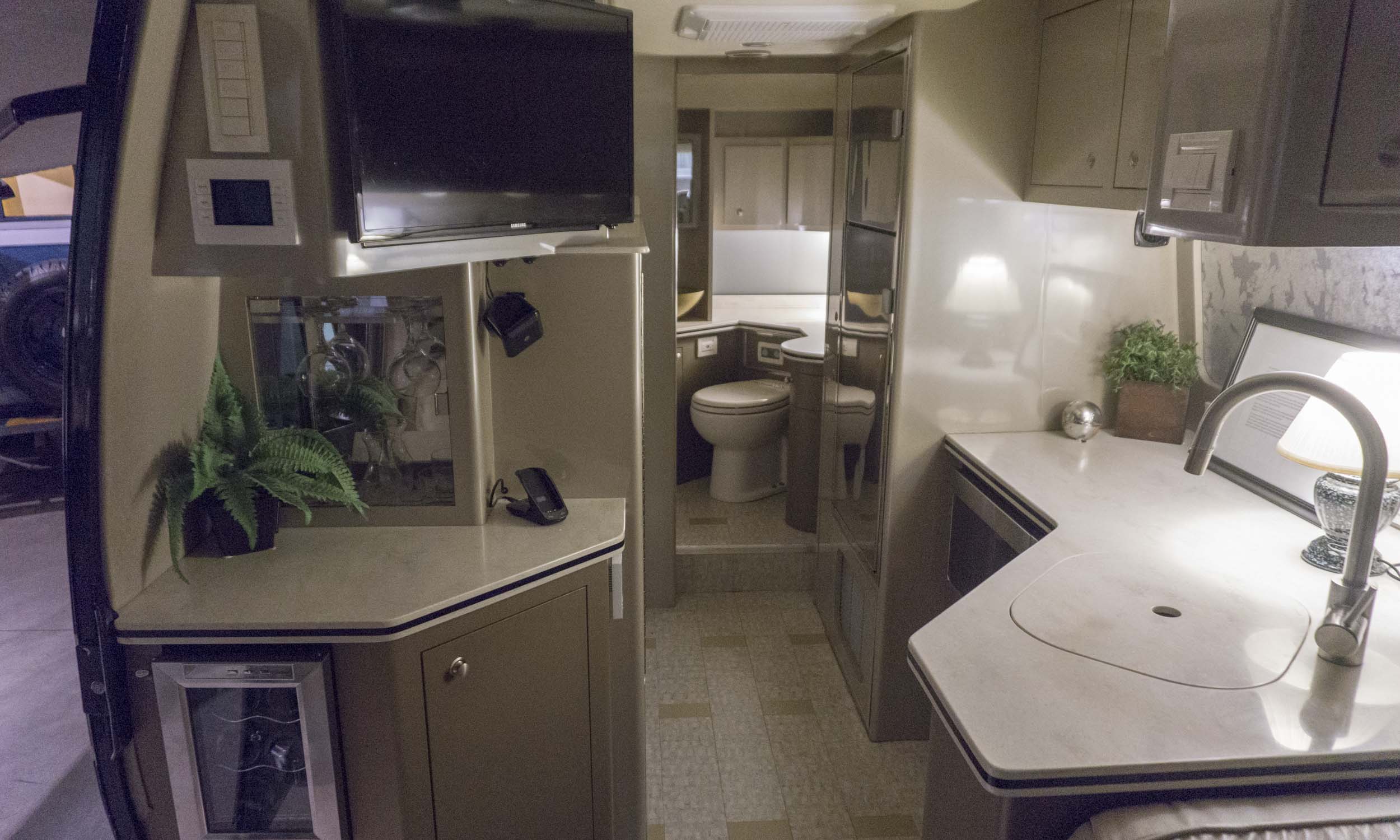 Tight quarters, shower to the left in this picture.  Again absolutely beautiful.

Absolutely stunning isn’t it.  So what’s wrong with it?  It can’t be driven.  It’s owner claims that each time he drove it, it tried to kill him.  Others who own similar vehicles have absolutely no problems with the handling.  Is it overloaded?  Was something done wrong when the running gear was upgraded?  No one knows and no one will buy it.  So it’s owner donated it to the RV museum.

Let’s jump over to Jayco now.   This is a 1968 Jayco Jayhawk Camper.  Lloyd Bontrager founded Jayco in the 1960s, and this camper was the 40th trailer he built. The crank-up roof system was unique at the time.

Let’s look at a Scotty Trailer.  This is a1957 Serro Scotty 12-Foot Travel Trailer
Serro Scotty trailers stood out for their unique low silhouette with a rear entry door and drop-down floor. This design allowed owners to store the trailer in a typical residential garage. 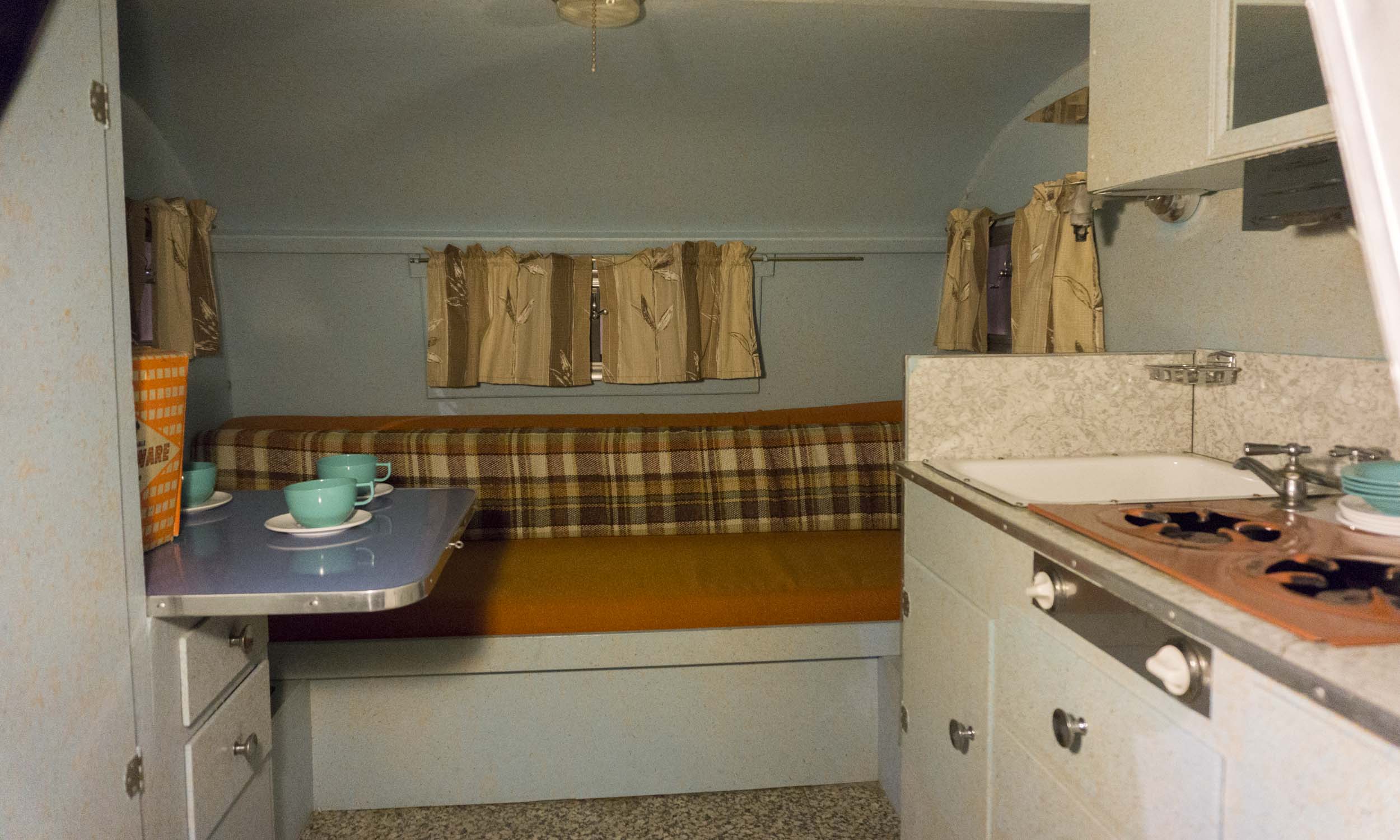 We’ll end our tour of this hall with Winnebago.  This is a 1967 Winnebago Motor Home.
Winnebago had been a travel trailer manufacturer until the mid 1960s; this is an example of the company’s first motorized RV. Priced around $5,000, the Winnebago started the trend towards affordable motorhome production.

That was then.  How about now?  This is a 2019 Winnebago Vista
This is one of the latest models to come from Winnebago. It includes features that weren’t even thought of when the first RVs were coming to market, including LED lighting, Primera-covered furnishings and a powered patio awning with LED light strip.

That’s the end of our trip down memory lane.  There are still other vehicles on display but some of them I didn’t get pictures of.  By the time I was to the end I was on picture overload.

There are two other halls in the Museum.

The Hall of Fame.  Pictures of those who have made a significant contribution to the RV industry.

That brings us to the end of our tour of the Museum.  I could have spent hours in the research library but I knew better!  The museum is absolutely fascinating and I would encourage you to put it on your bucket list of must places to visit.  There is so much more there then I could every include in one or two blogs.

That brings us to the end of our day on The Road of Retirement.  We went to church – what a joke it turned out to be.  More like the personal political views and beliefs of the preacher.  Our laundry is done.  Time to have a glass of wine and and sit back and relax.  Tonight I’ll separate us from the mother ship so that we’re ready to roll over to the repair shop first thing a.m.

Thanks for joining us again.  We always appreciate your company and comments.  Catch you tomorrow.