Home Is Where We Park It:  D and W Lake Camping and RV Park

Time to continue our westward push.  Time also to put a new state on our map.  No rush to get going since it was only a three to four hour drive and we would be gaining an hour.  Yup, we’re going back into Central Time.

A quick breakfast at McDonald’s then back to the rig.  Slides in, jacks up, Little Graybeard on the bar and we were ready to roll.  I was a little nervous this time since our RV GPS, my phone, and Google maps were all coming up with different routes!  Normally, I can get at least two of the three to agree.  Ah well, we’ll go with the RV GPS and correct if necessary along the way.

It was pouring as we left but since the storm was moving from west to east we figured we would be able to drive through it.  And so we did.  It was a bit intense at times but within an hour we were rolling on dry roads with clear blue skies overhead.

Traffic was mostly light but we did end up delayed for a bit yet we never were able to figure out why traffic came to a standstill.  It was only for about 15 to 20 minutes and then just like that it all opened up and we were off again.

This trip we had music to lighten the load.  We’ve always had Sirus in the car but could never get it installed in Graybeard.  Then we discovered the app on our phones.  Sign in and you have instant music.  We made it even better by picking up a small Bluetooth speaker to pair with the phone.  Nice, really nice.

One stop for gas, we’re getting a solid 7 mpg since we’re finally on long, level, flat roads. With the price of gas I’ll take every mpg I can get.

In due time we were turning into the front gate.  The campground looked absolutely empty.  Ah, but not for long.  We were in for about an hour and within that time I counted over 10 rigs that rolled in right after us.  And they just kept coming.

So here we are at our new home.  Our 24th new home for this year.  I guess you could say that we get around!  We have a pull-through, hard packed gravel, dead level with all utilities convenient to the wet bay.  We have partial shade which is nice when the temperatures begin to climb.  As a joke I plopped Gertrude on the ground and wondered what would happen.  Less than five minutes later we were watching TV! 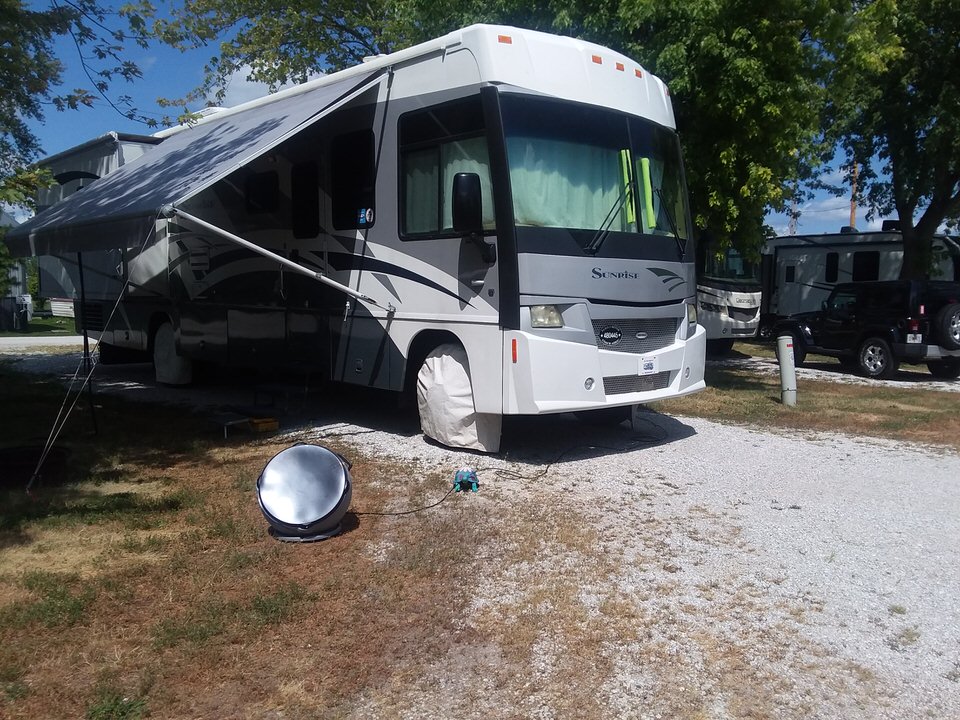 This is our view out the front solarium window.  Really sweet.  I have to say for the most part the sites we’ve had so far this year have by and large been darn nice.

That was our day on The Road of Retirement.  It’s been a long day but another good one.  This switch to Central Time will again take us a few days to get used to.  My body says it’s time to go to bed, the clock says its too early.  Forget the clock I’m going with my body.

Thanks again for coming along with us.  We appreciate your company and your comments.  Catch you tomorrow.