Home Is Where We Park It:  D and W Lake Camping and RV Park

What a beautiful morning we awoke to.  I went to the solarium, pulled back the curtains and what a sight.  The sun was just sparkling off the lake.  These are the kind of days that make you feel good to be alive.  What a wonderful world you have created O God.

Today we’re going to take a tour of the Studebaker National Museum.

Here’s Barbara getting our stickers for the tour.  You go girl! 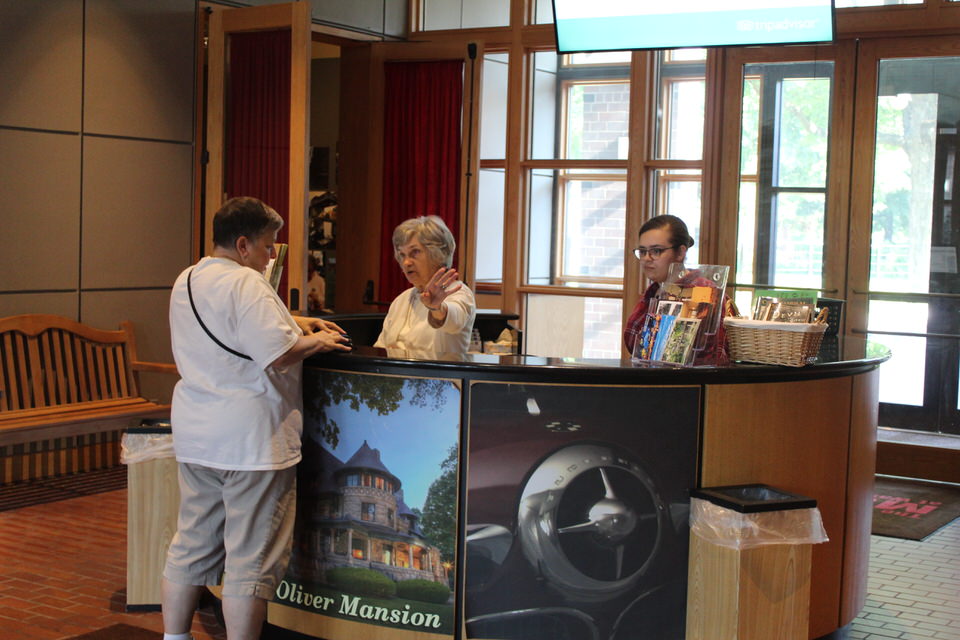 The lobby itself is full of all kinds of fascinating items.  There is a table full of advertising literature from 1962 to 1966. 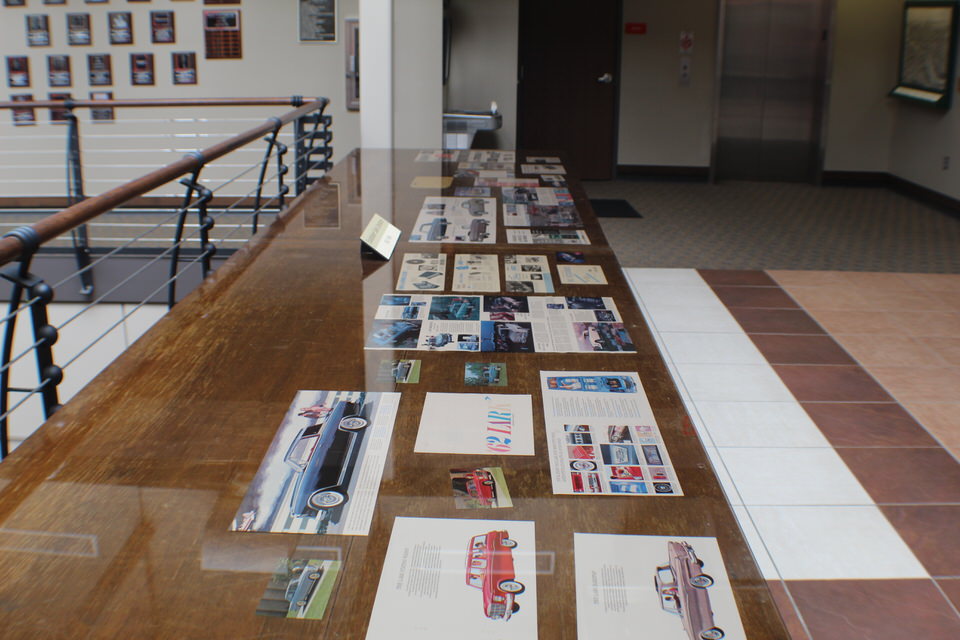 Publicity Posters – what no Air Conditioning? 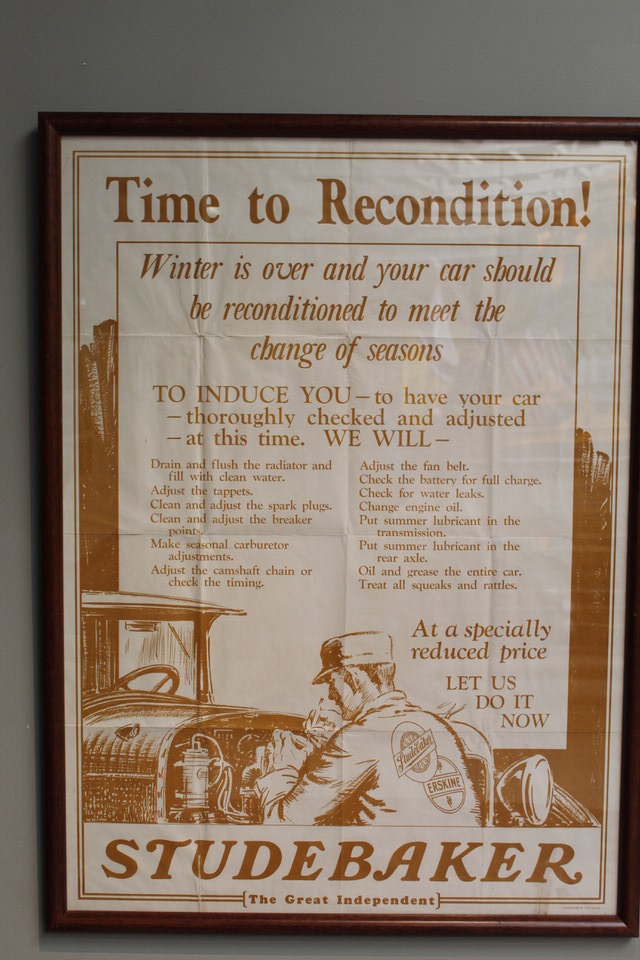 A picture of a typical service bay.

This fantastic neon sign leads you up the stairs to the second level.

I couldn’t pass up a photo opportunity. 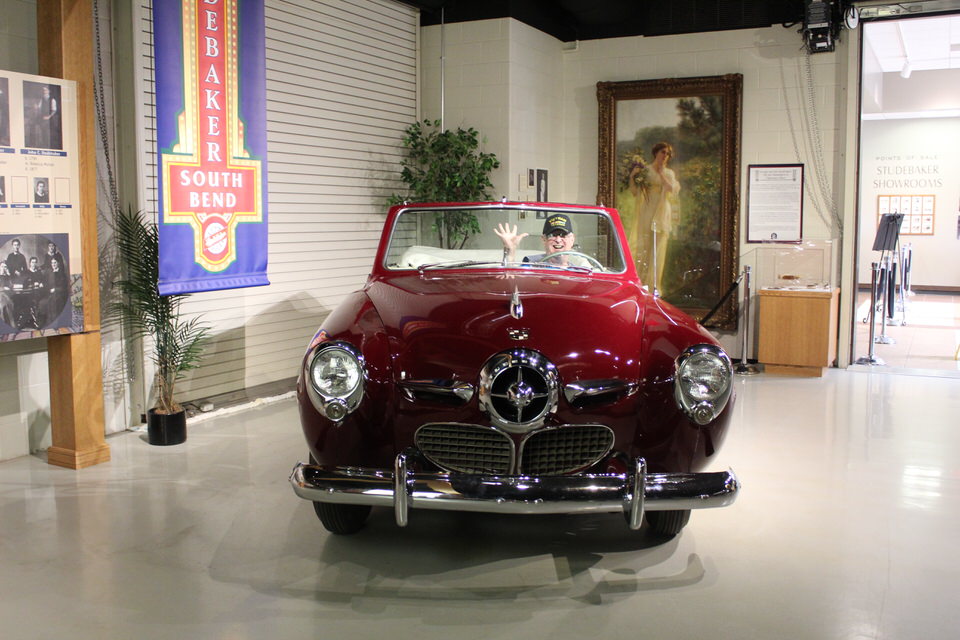 A free standing sign listing the exhibits on the different levels. 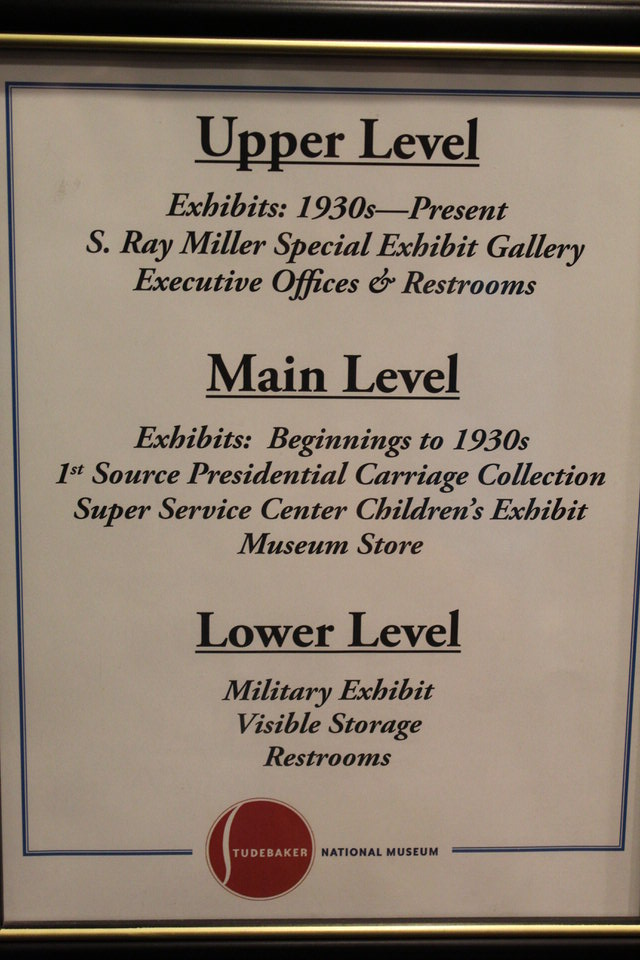 Ready?  Let’s begin our tour with the main level.  The story of Studebaker begins with John and Rebecca who had ten children 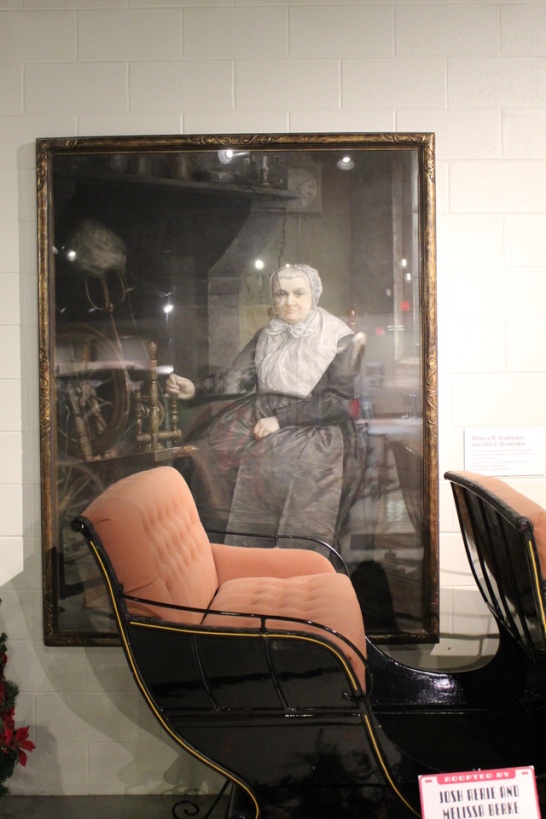 Their family was a family of craftsman.

John was an established blacksmith who lived just outside of Gettysburg.  In addition to his blacksmith chores he also repaired wagons.  As each of his sons came of age they assisted their father in his labors and became well versed in the trade.

Though John’s blacksmith skills were second to none, his business skills were sorely lacking.  Because of this he became heavily in debt and was forced to sell his farm and shop.  In 1836 they left Gettysburg and headed west to Ashland, Ohio. 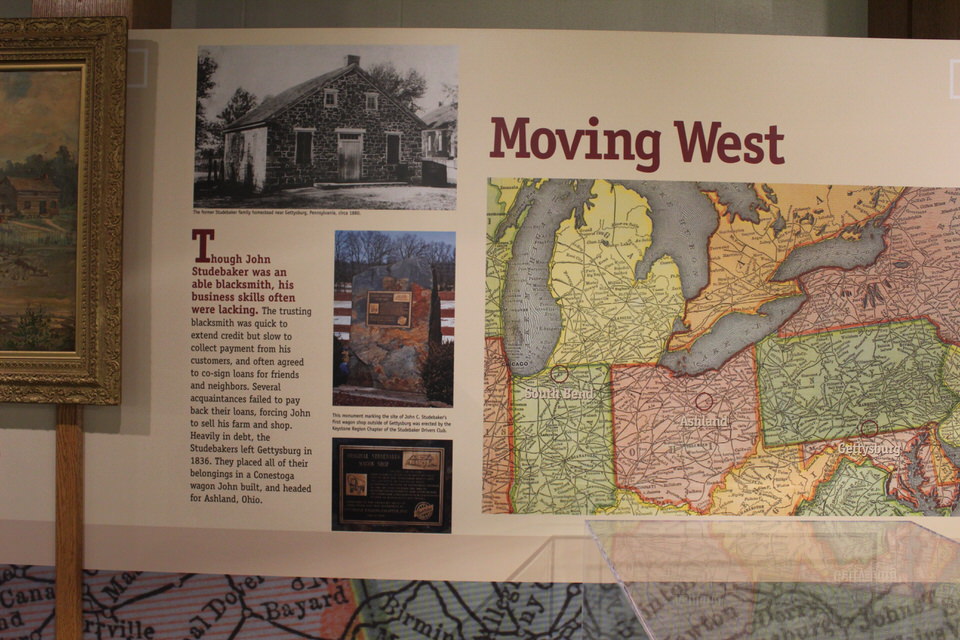 This is the actual restored Conestoga Wagon that he build for his family’s move westward.  It’s curved shape prevented cargo from shifting and made it easier to ford streams.  It was only designed to carry cargo, its owners would have walked alongside it. 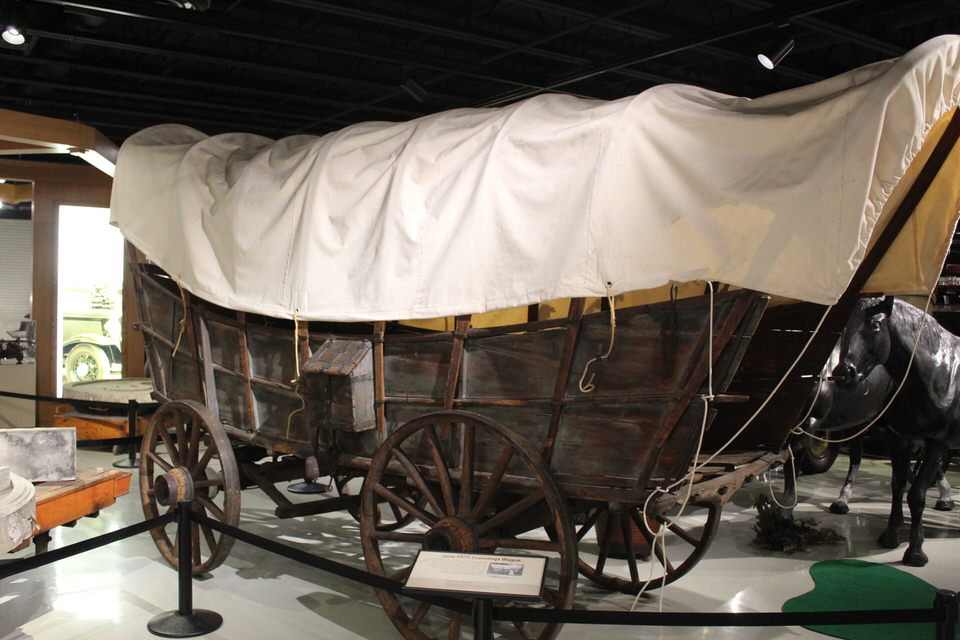 Once in Ashland John’s services were again in demand but once again his poor business practices forced him deep into debit.  Once again they were forced to move.  Since his one daughter had already moved west to northern Indiana the family followed her.

Two members of the family who followed were Henry and Clement.  On February 16, 1852 with total assets of $68 they opened H & C Studebaker Blacksmith shop.  Building on their father’s philosophy Always Give More Than You Promise their business was an immediate success. 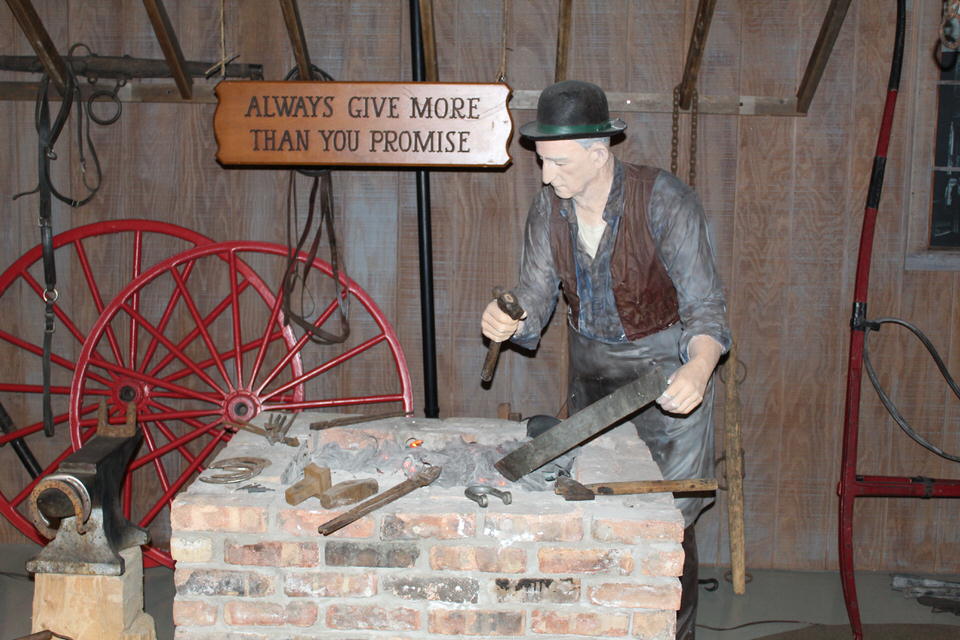 In 1857 they accepted an order an order for 100 Army wagons.  The brothers expanded their business leaving them short of cash.  Bankruptcy was on the horizon.  But then a wheelbarrow saved them, literally.

J.M Studebaker had gone west in 1850 to seek his fortune in the California gold rush.  Upon his arrival he began building wheelbarrows for a local blacksmith.  By 1857 he had amassed $8,000 from his wheelbarrow sales.  He returned to South Bend and invested in his brothers business by buying out his brother Henry’s share of the business. 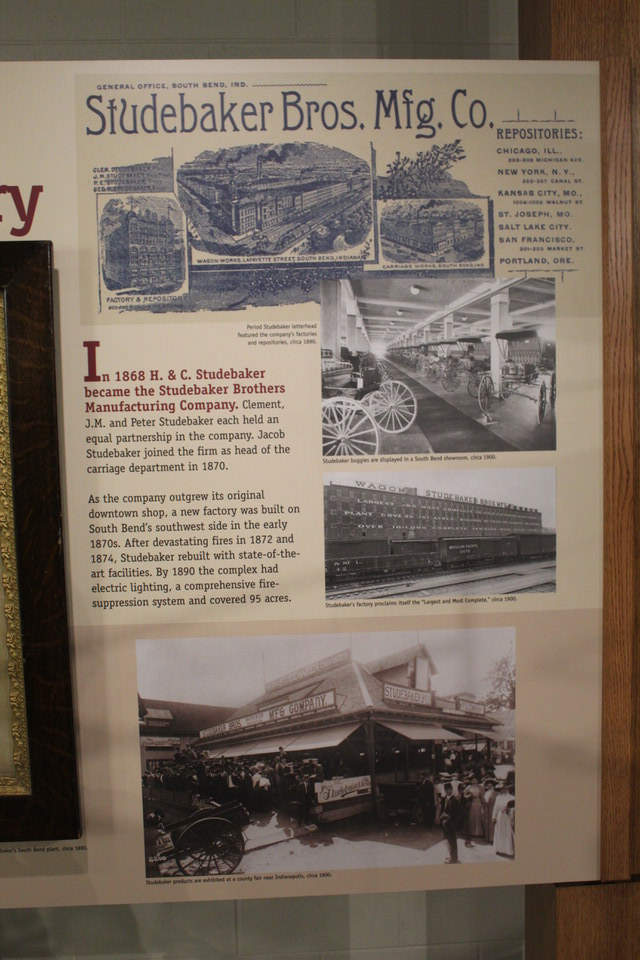 After devastating fires at their original factories in 1872 and 1874, the Studebaker’s rebuilt with state of the art facilities.

Fairs and Expositions were attractive advertising venues before radio and television and the Internet.  Winners of competitive contests gained great promotional value for their products.  Studebaker knew this and took great advantage of it.  For instance,

The first wagon that brought worldwide recognition for Studebaker was the 1876 Centennial Wagon.  The company was just 24 years old at this point when they won the Highest Award of Merit at the United States Centennial Exposition in Philadelphia.  In 1878 it won a silver medal  at the Paris Exposition. 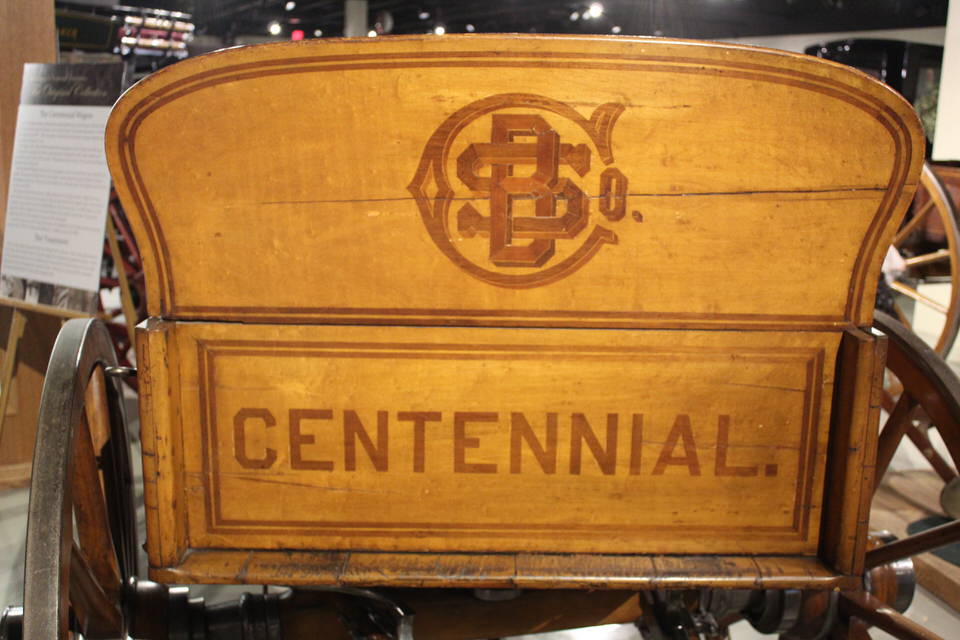 The wheels and running gear are made of oak.  The box is made of bird’s eye maple.  Metal parts were forged from Swedish iron.

The next major wagon was the 1893 Columbian Exposition Wagon.  It was also nicknamed the Rosewood Wagon and the Aluminum Wagon for its extensive use of both.  It was built to showcase Studebaker’s craftsmanship and to celebrate the company’s many awards and achievements.  It took over 4,000 man hours to complete and cost $2,110.65 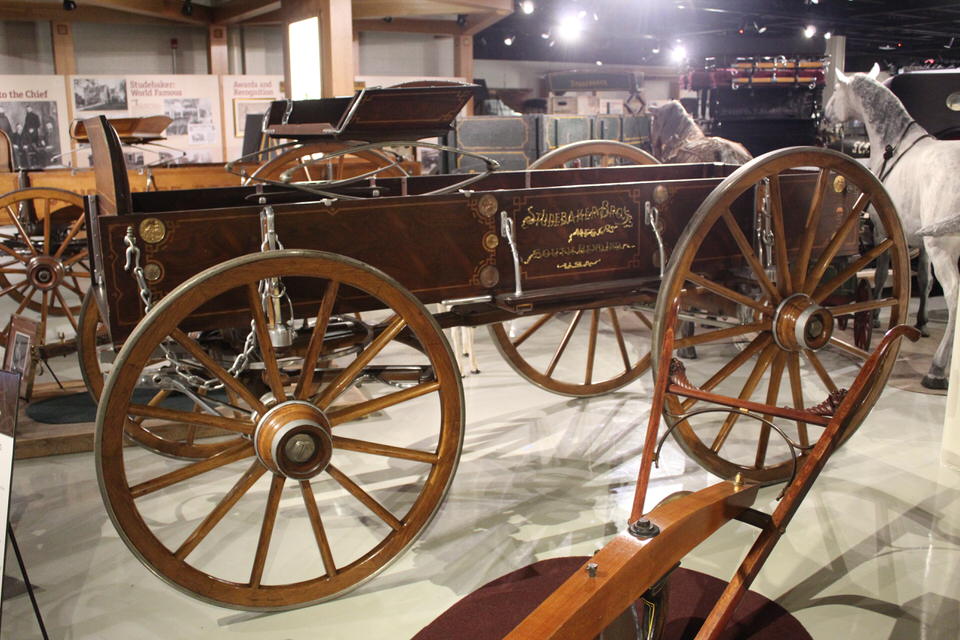 The box is overlaid with holly and inlaid into the wagon are 35 medals celebrating the companies awards and achievements.  The lumber for the box came from Brazil; the running gear is made of Indiana Hickory. 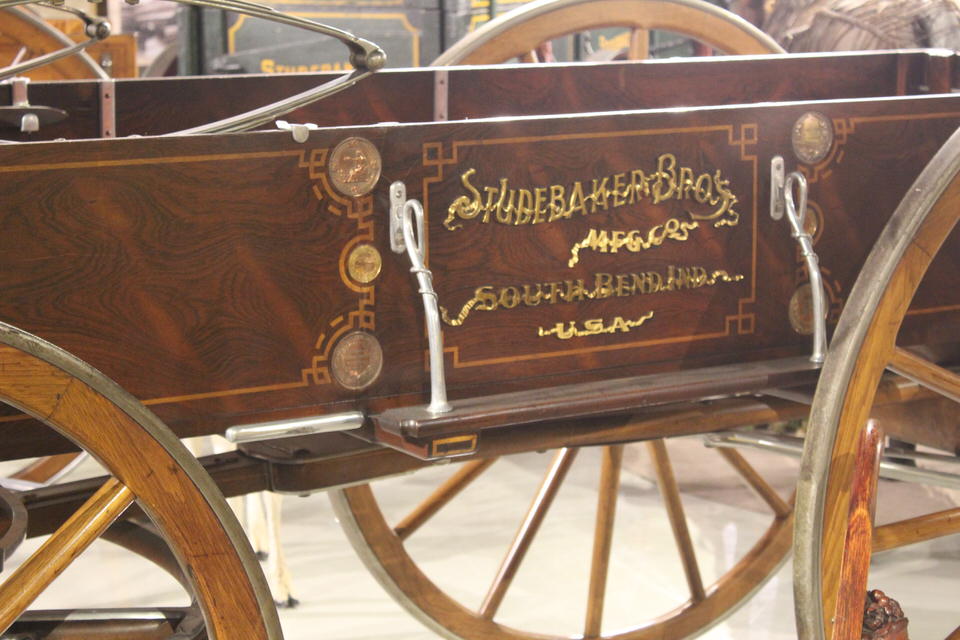 All medal on the wagon except the tires and springs are aluminum.

By the mid 1880’s Studebaker Brothers was the largest manufacturer of horse drawn equipment with annual sales of over $2 million dollars.

Let’s take a look now at some of the equipment they produced.

I bet a person could have had fun with that trap door! 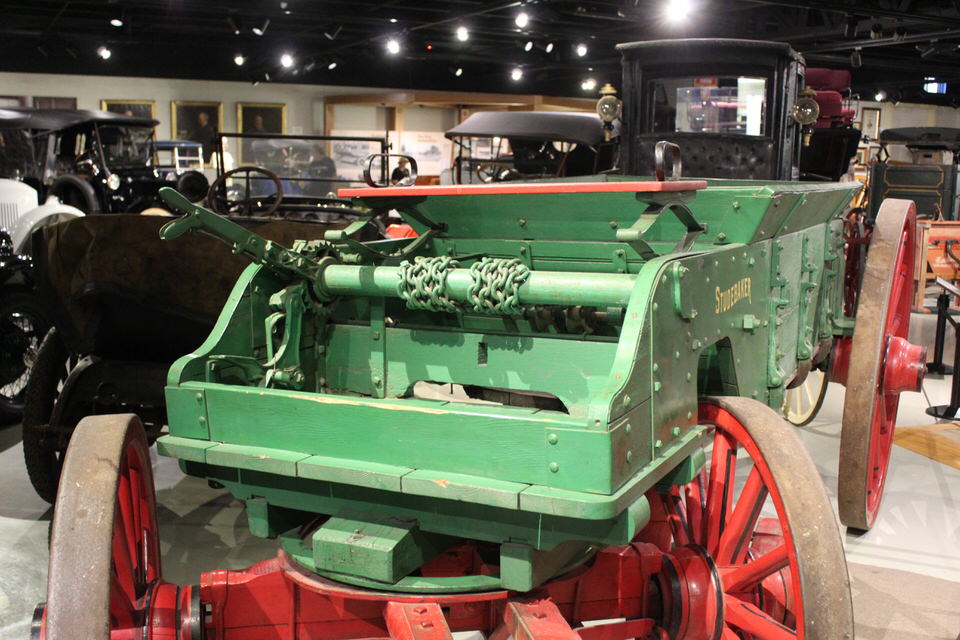 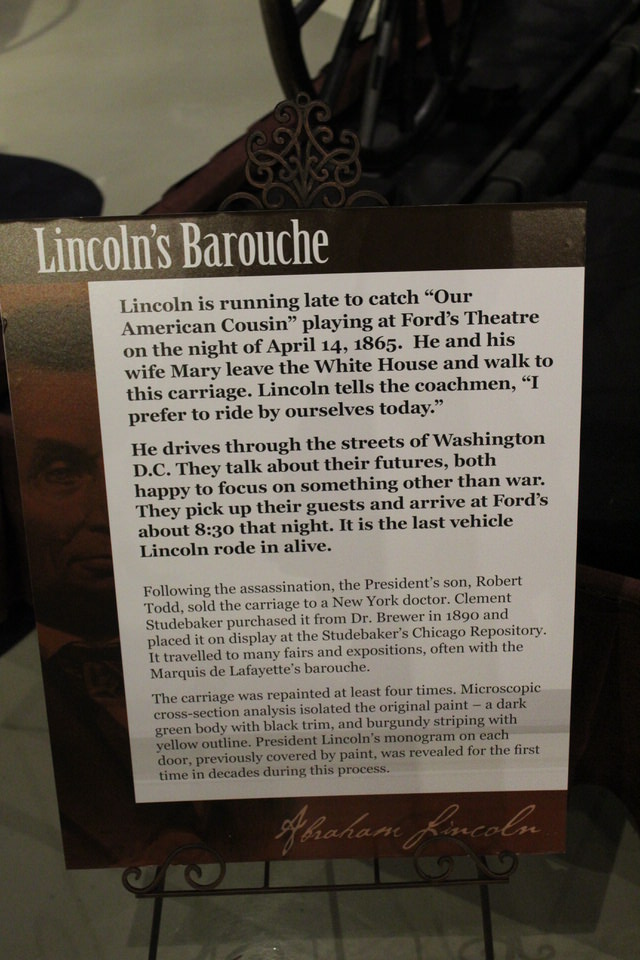 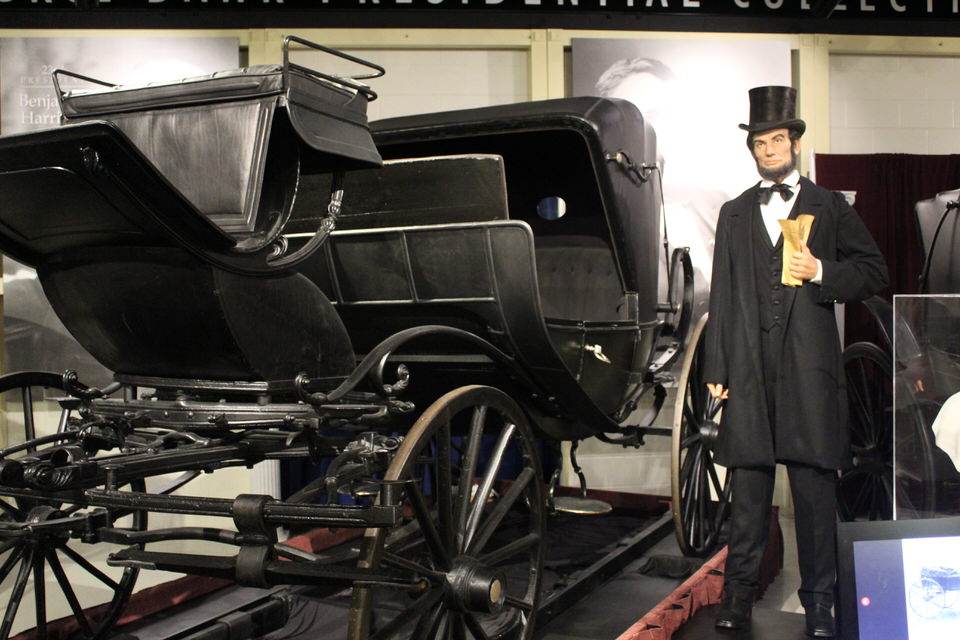 They also build equipment that was used during WW I 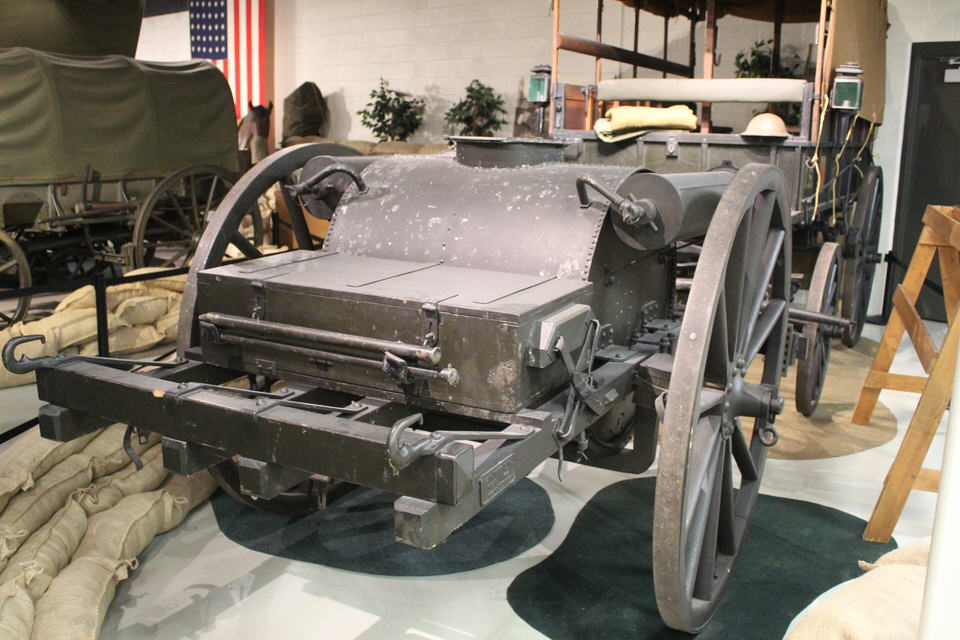 Time was moving on and soon Studebaker would have to make a decision, to stick with what they were familiar with or make the daring jump to horseless carriages.  In 1919 they discontinued all buggy manufacturing and in 1920 they sold their horse drawn business.  Here are the last horse drawn equipment they made.

Tomorrow we’ll look into the Studebaker transition from buggies to automobiles.  We’ll also look at the cars they built.

Before we go, though, one other exhibit was on the second floor.  Let’s take a look at it.  It was a display of non-Studebaker cars of notable mention.  Here we go.

This D8 sits on a 132 inch wheelbase and it has the curves to please.  This was one of my favorites. 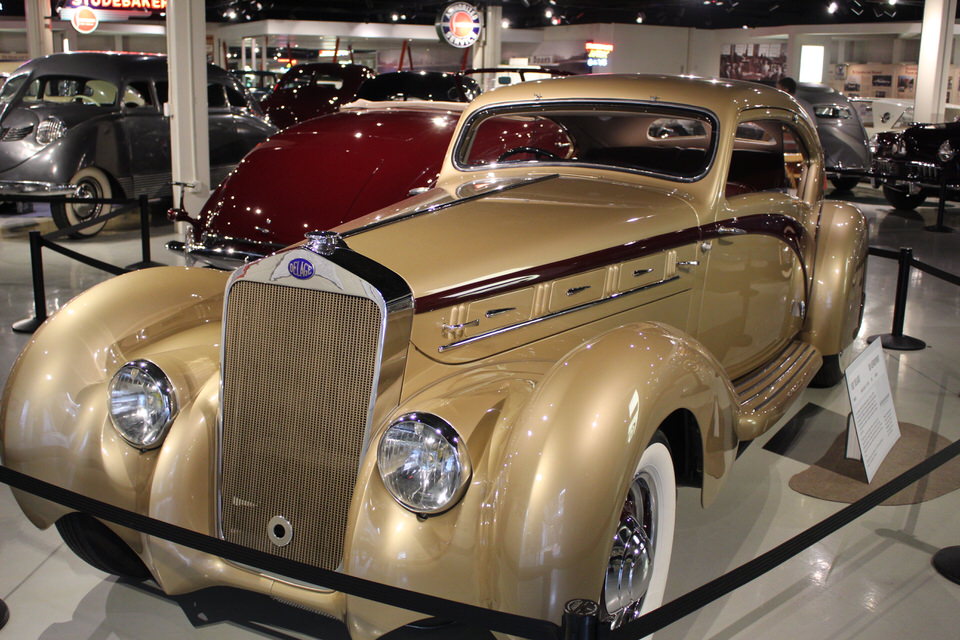 What an impressive grille. 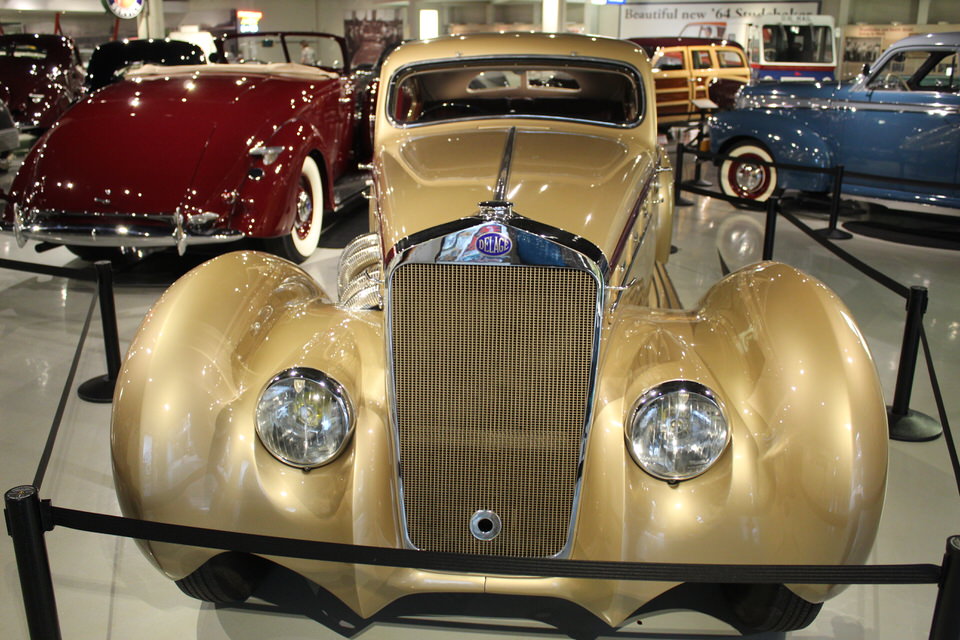 It flows from front to back.

Eliminating the bumpers added to the smooth look. 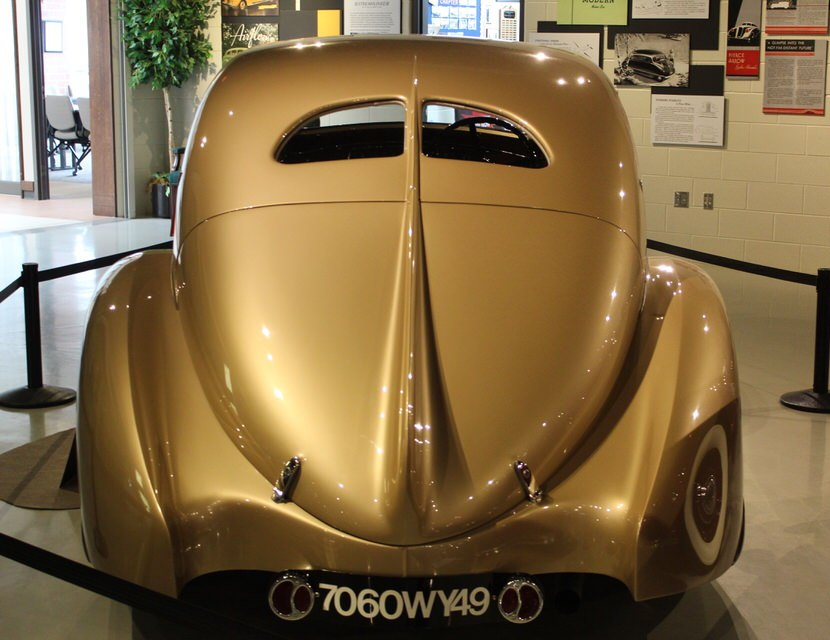 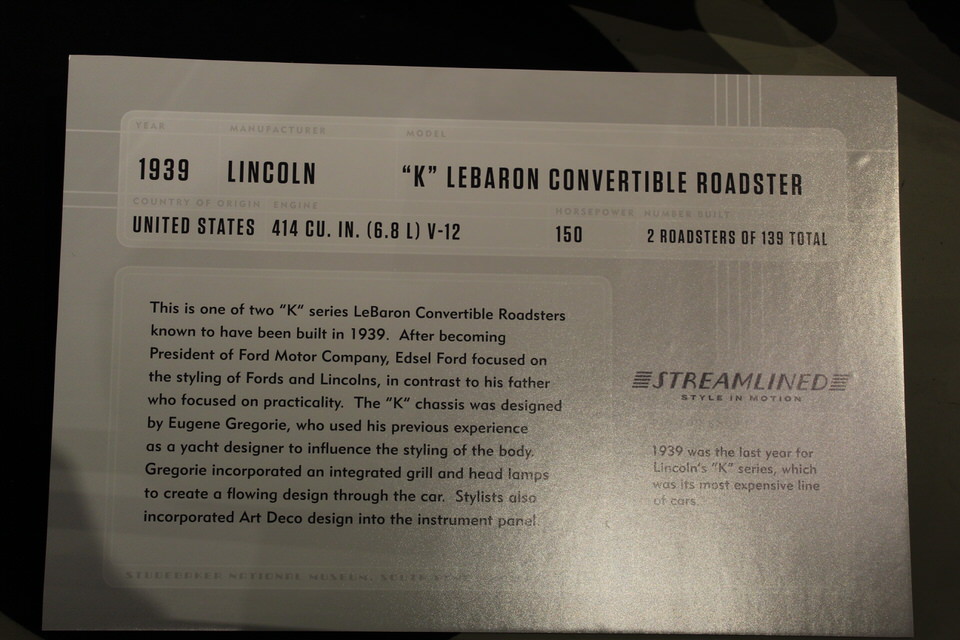 Just look at how the headlights flow with the fenders. 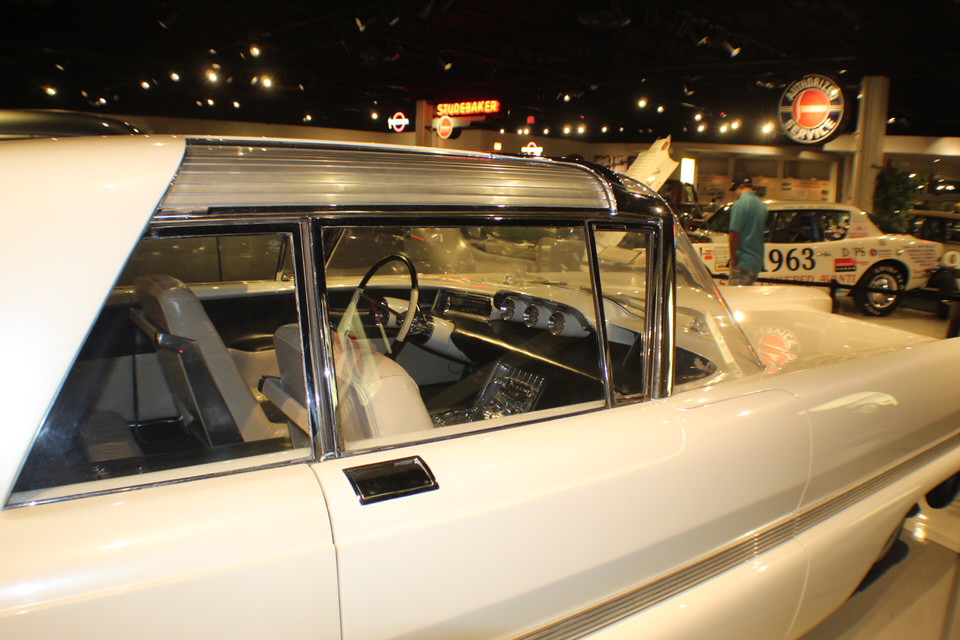 The beginnings of the minivan.  At the time it cost $5,000, in today’s dollars about $90,000!  It was sold by invitation only and you had to be selected in order to receive one.  It is of uni-body construction and the engine is in the rear.  It is all original. 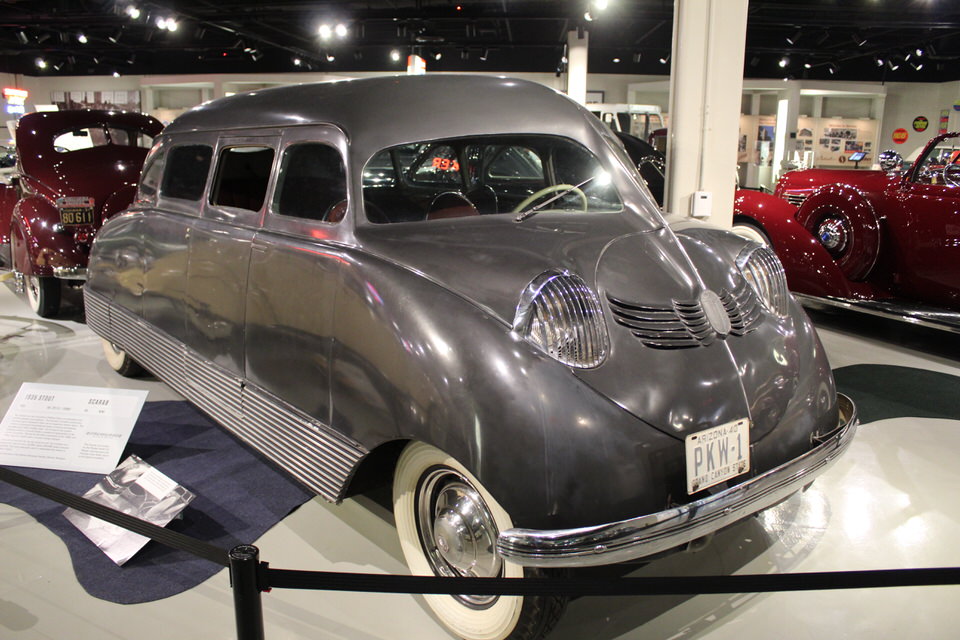 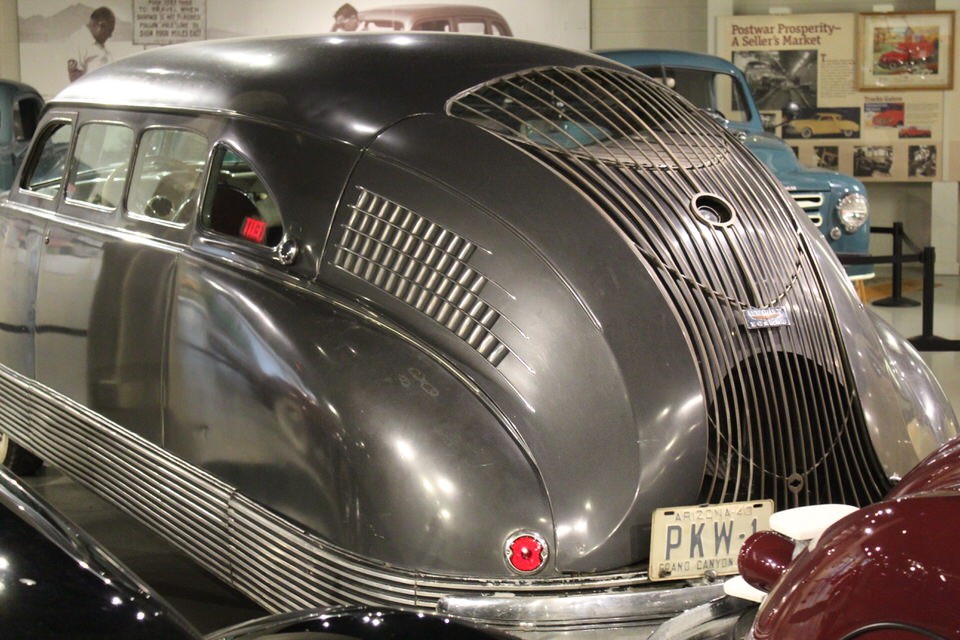 This Chrysler was designed in a wind tunnel.  It had an all steel body and a vee windshield.  The public believed it was too radical so sales were only lukewarm.  Within two years Chrysler dropped it from their line. 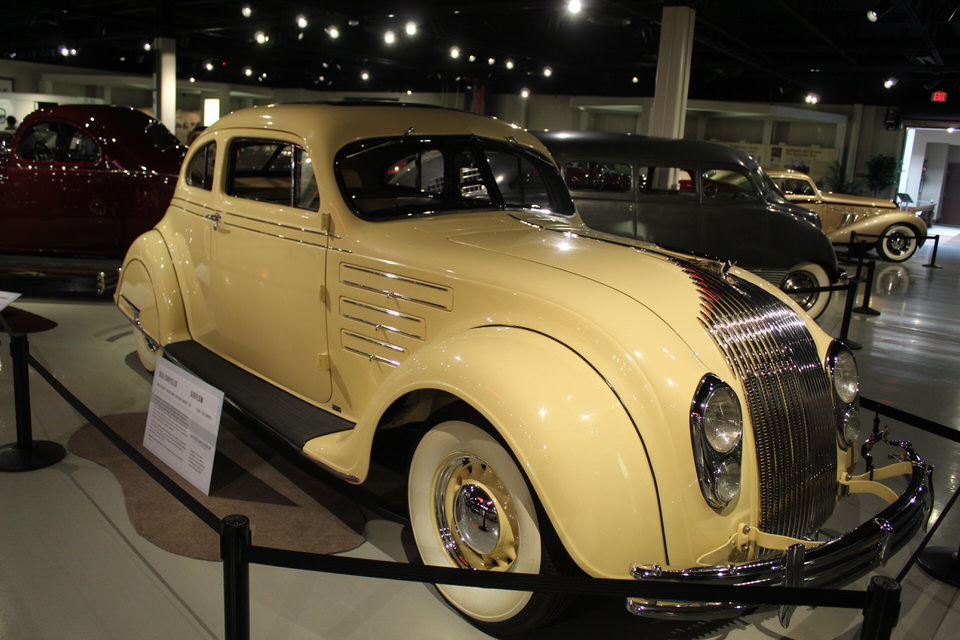 What an impressive dash. 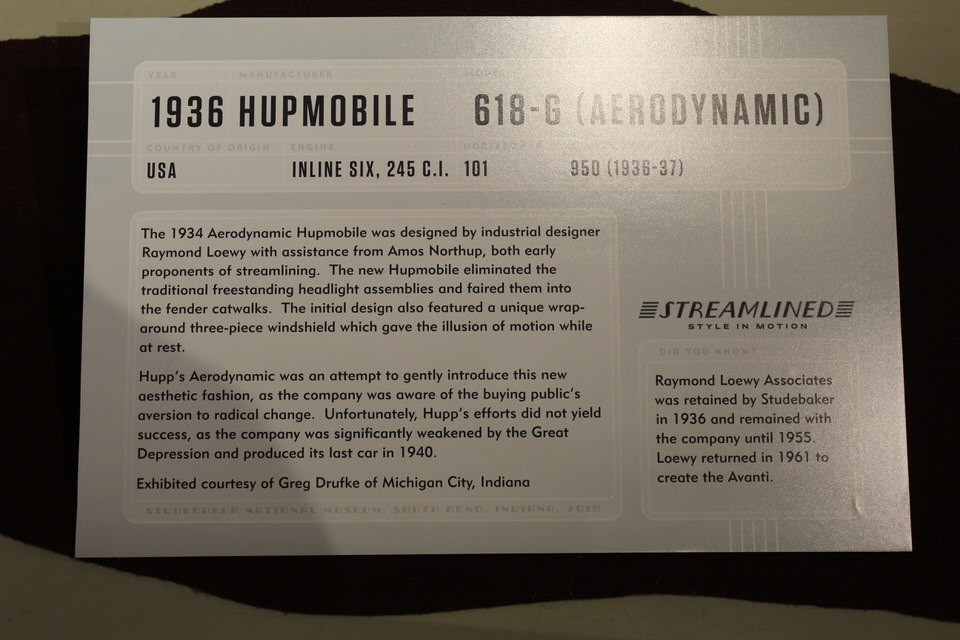 The traditional free standing headlights common at the time were removed and the headlights were faired into the fender catwalks. 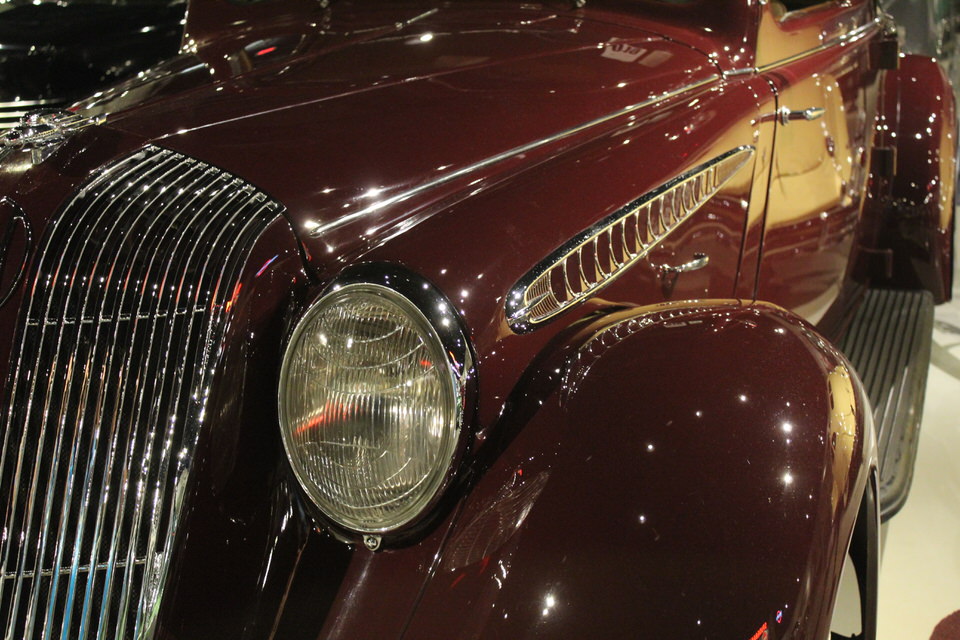 Front wheel drive and the first car to have retractable headlights. 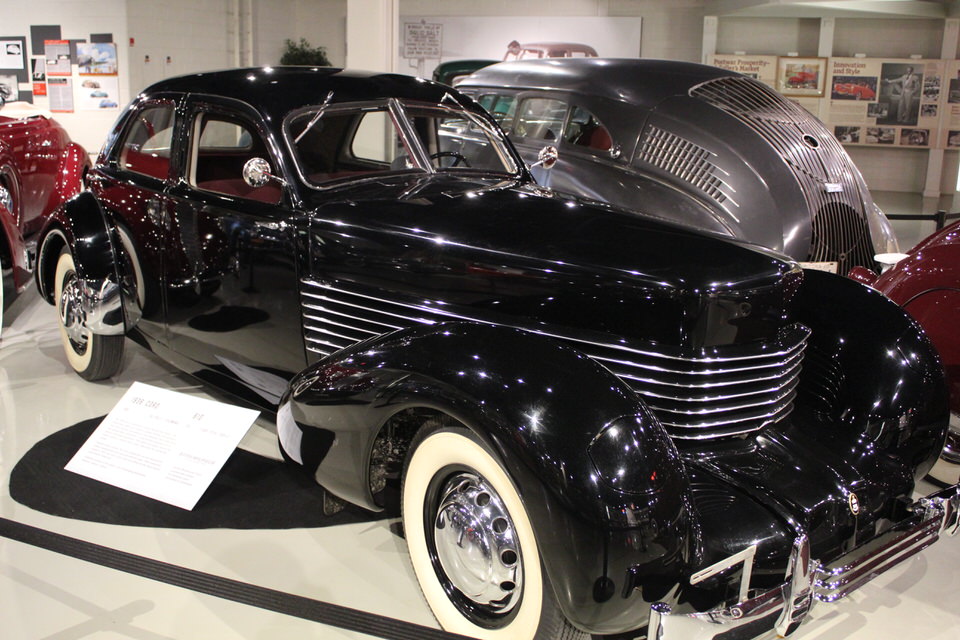 Front wheel drive and independent suspension, unheard of at the time.  To maintain the streamlined look the gas cap water fill cap were moved under the hood.

Those were the days weren’t they, the days when cars had class.  No cookie cutter look alike but bold, radical and designed to push the envelope.  Gone for good, unfortunately.

Our day on The Road of Retirement has come to an end.  A great day all around.  Nowhere to go, nothing other regular maintenance to do.  Pictures to sort.  Routes to map.  Our 2019 map to update.  All stuff I find enjoyable.  We’re finally adjusting to Central Time again.  I’m glad we stay in it for the next month or two.

Thanks again for coming along with us.  We always appreciate your company and comments.  Catch you tomorrow.