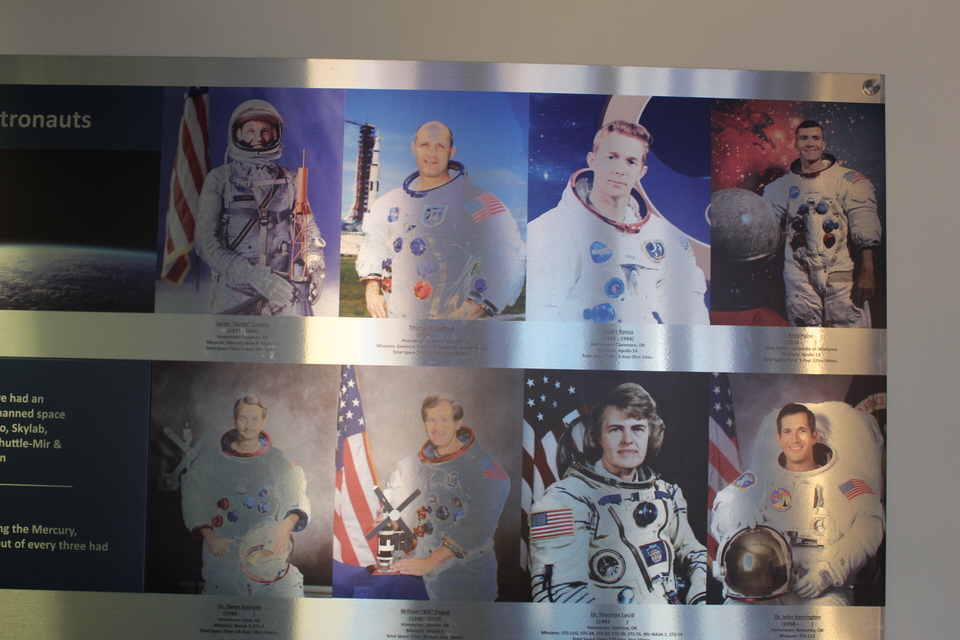 Another comfortable night for sleeping.  Another beautiful day.  Skies are overcast.  The wind, as always, is whipping through the park.  The temperature is a comfortable 81 degrees.  There is absolutely no humidity.  What more can you ask for?  Thank you Lord for this wonderful day you’ve given us to live and enjoy.

Well, I though I had seen everything.  That is until today.  A mid 2000’s big rig of 40 feet pulled into the the park.  Both sides all caved in along the locker doors.  Wires of all kinds hanging down in the back.  Lenses missing off of lights.  As I watched him back into a site I began to understand why.  That is one guy I would not want to meet going down the road!

The new safety cables came today and I already have them installed.  They are thicker than the original ones and so don’t fit through the tow bar.  No problem, I found a way to keep them off the ground.  The skid wheel we’ll have to reorder when we get to our next new home since it was not due until Thursday or Friday.

Let’s go back to the Stafford Air and Space Museum.  There is so much more to see and discover.  We’ll begin here, did you know?

We’re going to move now to the Aviation Exhibits.

This is a full scale flyable replica of the original Wright Flyer. 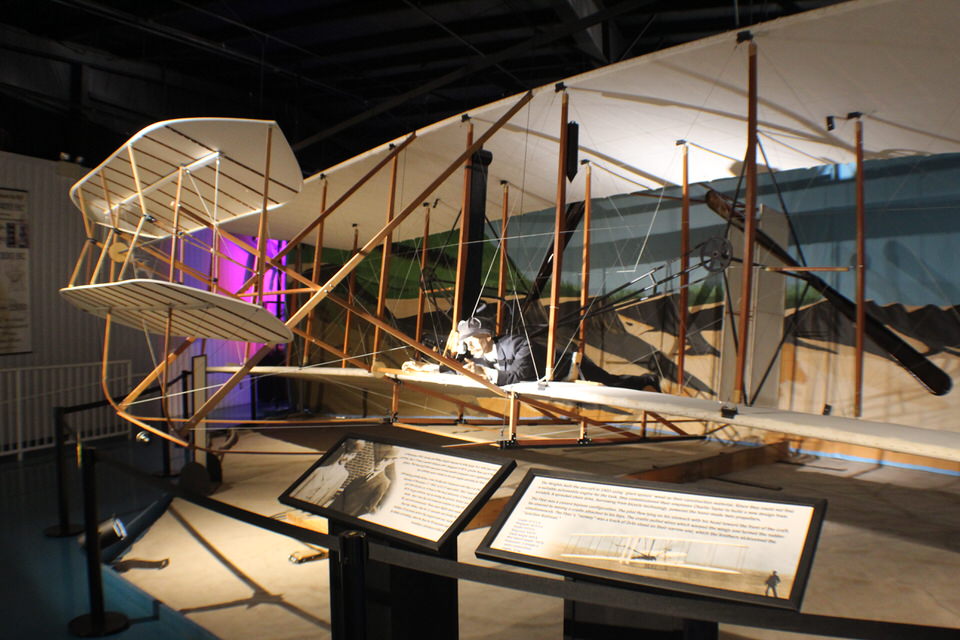 Where the income came from to finance their aviation experiments.

The Wright Brothers wind tunnel.  It took them over a month to learn how to use it effectively.  They used it to test more than 200 scale model wing configurations.

This is a Curtiss Pusher.  It was one of the first aircraft to be built in quantity.  It was also the aircraft type which made the first takeoff and landing from the deck of a ship.  This is a full scale flyable replica.

This is a Bleriot XI.  It was the first aircraft to cross the English Channel. 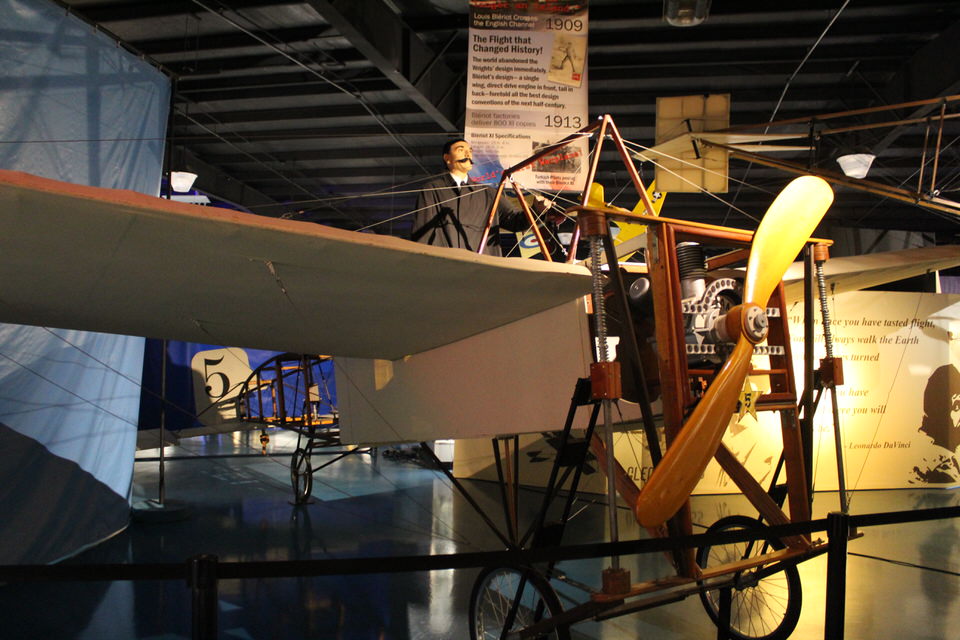 The design of this plane forever changed the shape of aviation.

This is a Sopwith Pup.  It was one of the first operational fighter aircraft.  It served the British well on the Western Front during the first two years of World War I.

It was also one of the first aircraft to use a mechanically synchronized machine gun that allowed it to fire between the blades of a rotating propeller.

Other WW I fighters. 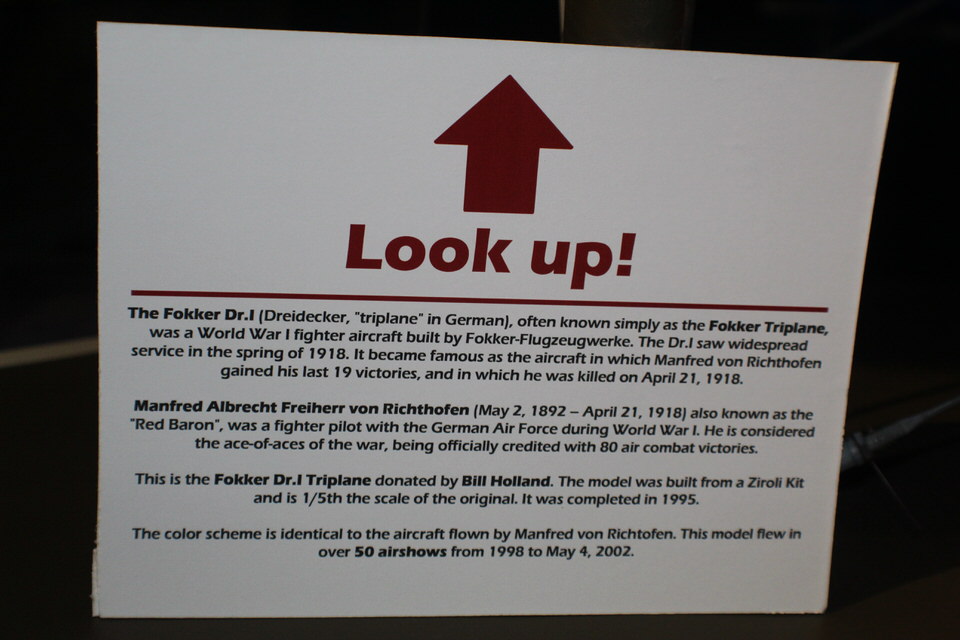 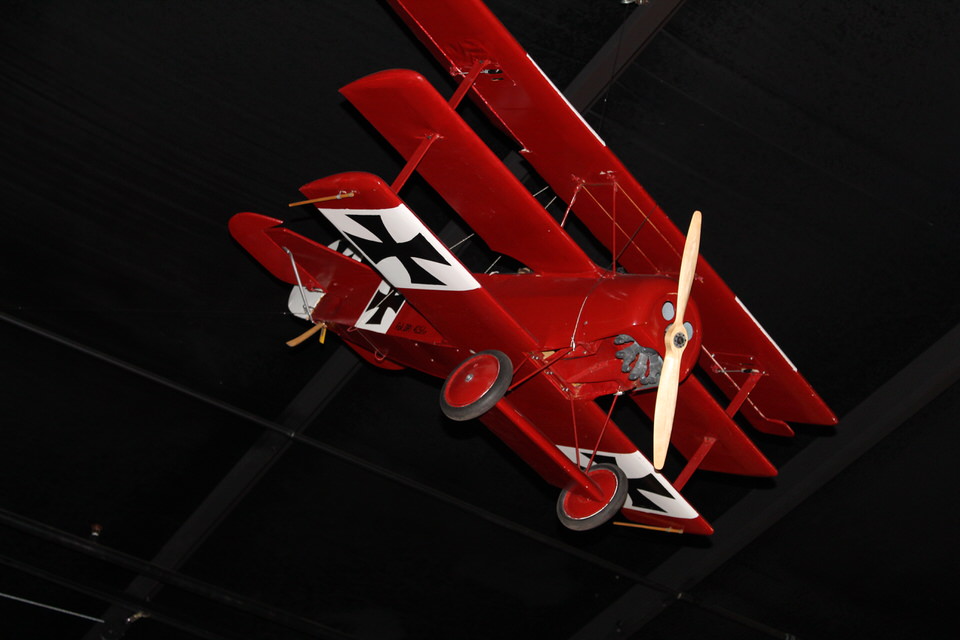 This is a full scale replica of the Spirit of St. Louis.  It is a custom built Ryan NYP aircraft named for his financial backers from St. Louis. 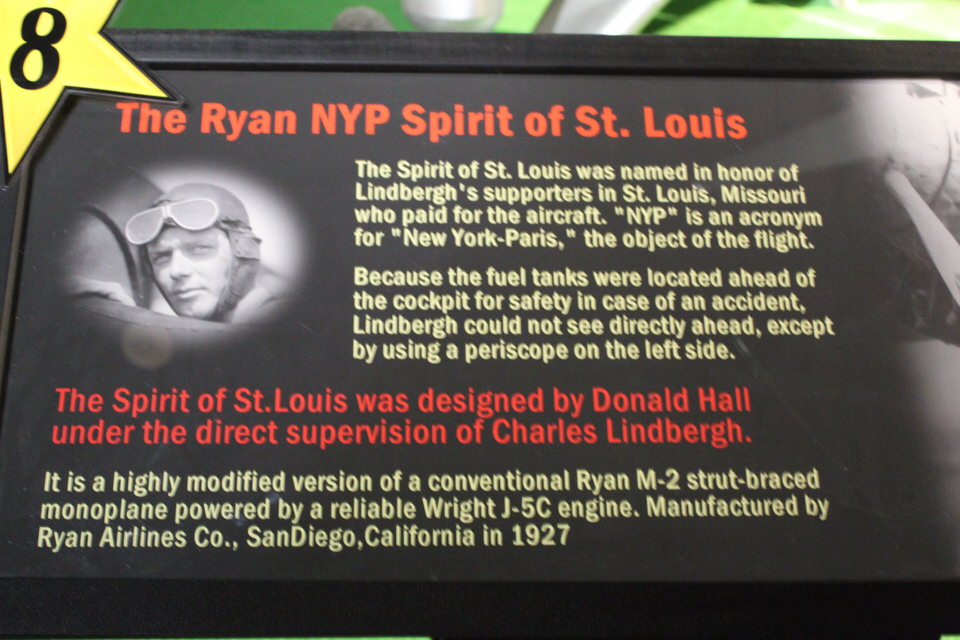 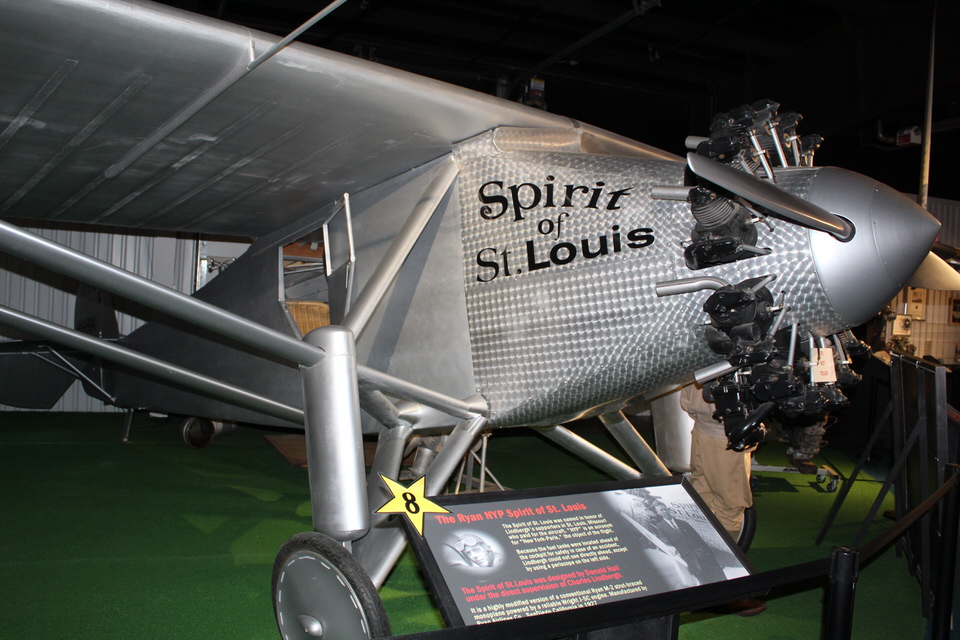 The periscope on the left side.

The Aviator, Charles A Lindebergh. 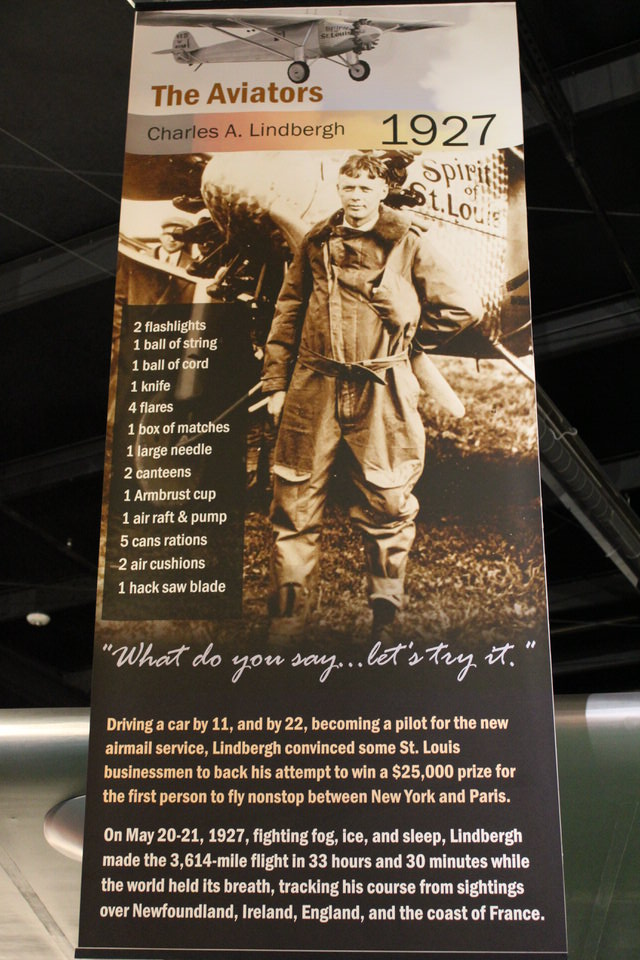 This is the Bell X-1 Rocket Plane.

On October 14, 1947 it became the first aircraft to punch through the sound barrier.  Air Force Captain Chuck Yeager piloted the historic flight and named the aircraft Glamourous Glennis in honor of his wife.

This is an F-86 Sabre Fighter.  It was America’s first swept-wing jet fighter aircraft.  It gained fame during the Korean War as the outstanding fighter of the day. 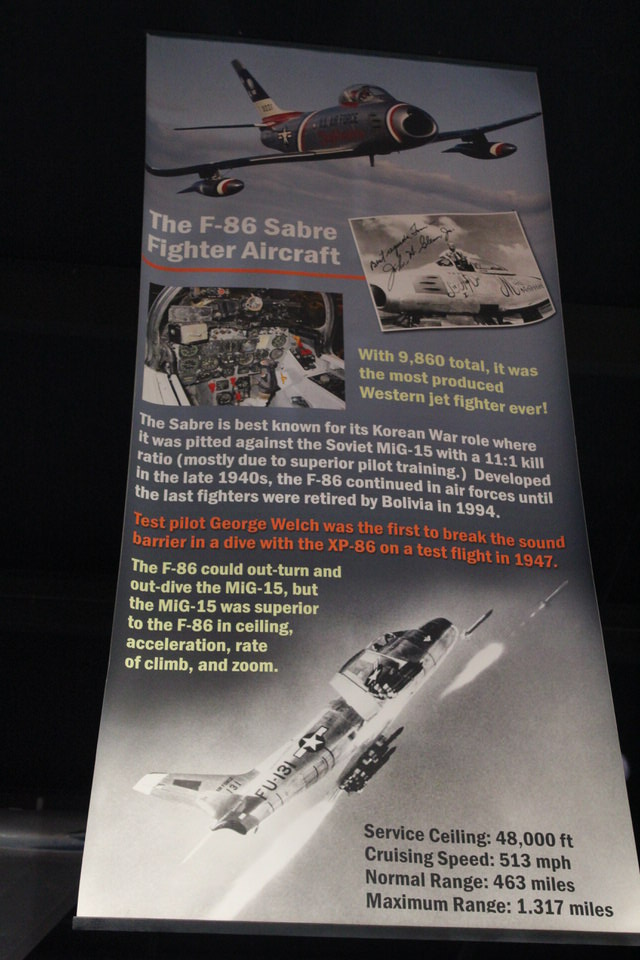 This is a MIG-21R Fishbed Fighter.  This Soviet aircraft was the most produced jet fighter aircraft in history.  It served as the front-line fighter for nearly all of the Soviet-bloc countries during the cold war.  This specific aircraft was flown by General Stafford during his tenure as Commander of the USA Flight Test Center at Area 51.

This is an actual F-16 aircraft.  It was developed under the direction of General Stafford.  It still serves as one of America’s front-line fighter aircraft. 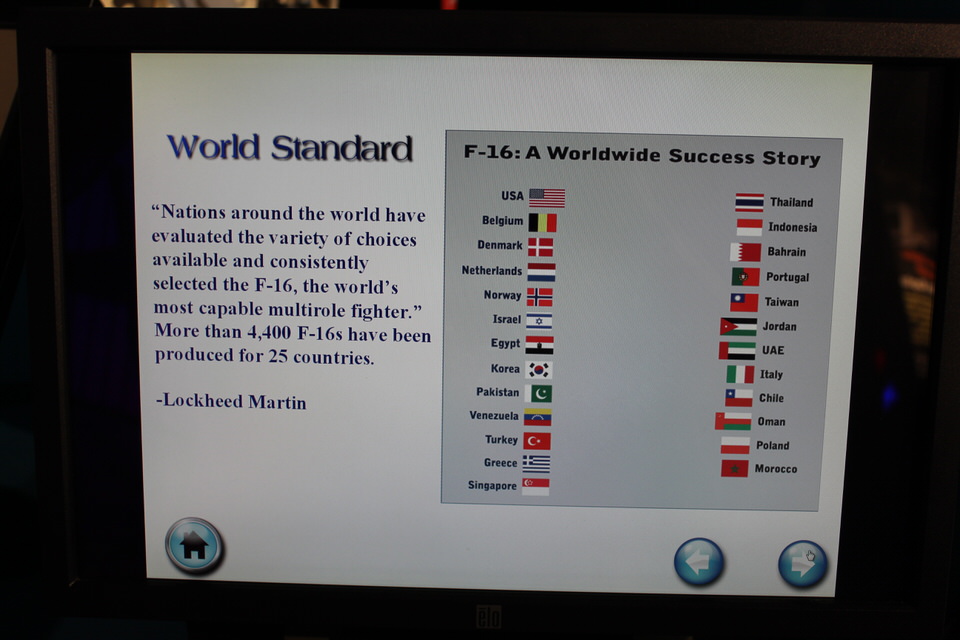 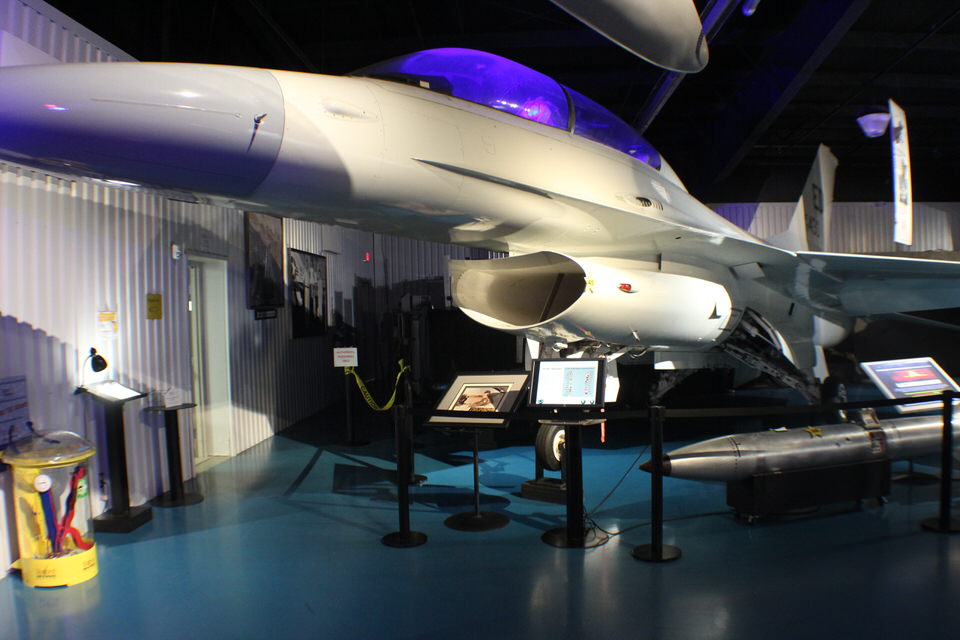 Finally, I discovered this room with a wrap around display case of model airplanes of all kinds. 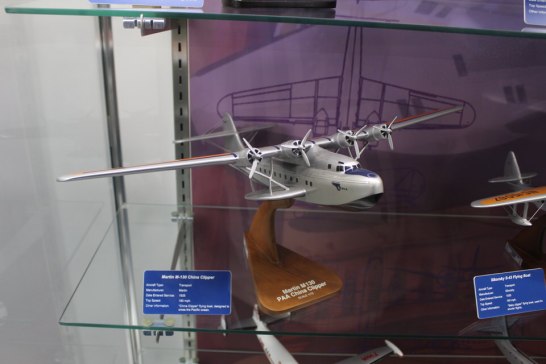 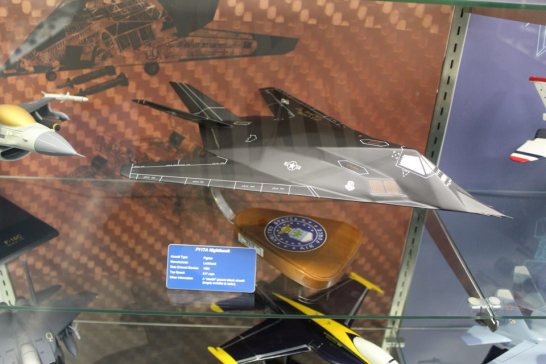 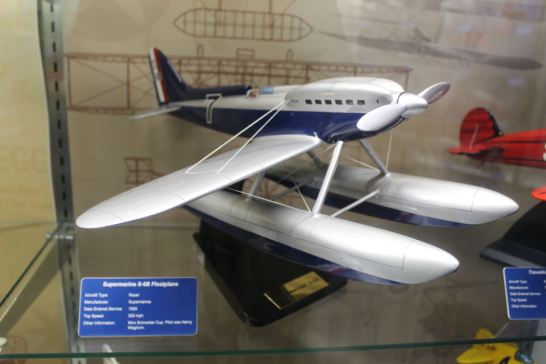 Let’s finish tonight’s tour with a few odds and ends.  We’ll begin with a full scale replica of the Little Boy Bomb, the first nuclear weapon used in warfare.  This replica was the type of atomic bomb dropped on the Japanese city of Hiroshima on August 6, 1945. 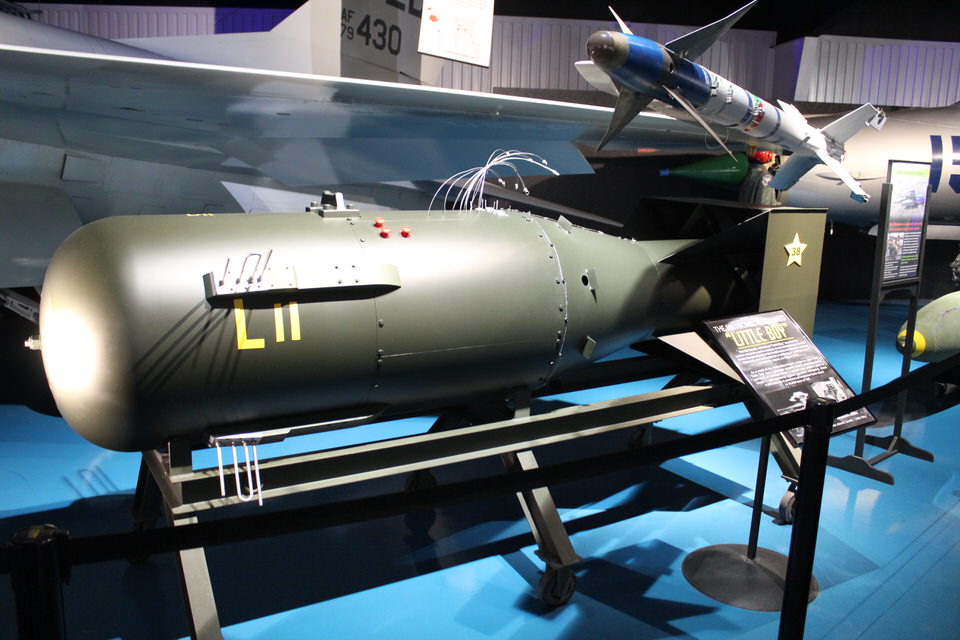 But Little Boy pales in comparison to the B-61 Thermonuclear Bomb.  This actual flight-ready but disarmed bomb is one of our country’s current air-dropped nuclear weapons.  It’s amazing to me that such destructive force can be carried in such a small package.

So much for tonight.  Tomorrow we’ll pick up and finish our tour with exhibits about rockets and space exploration.  I hope you’re enjoying our tour so far.  Tomorrow will be just as great as the last two blogs.  Stayed tuned.

So much for our day on The Road of Retirement.  The new safety cables have been installed.  We’ve played a round of Mexican Train.  Barbara made another wonderful meal.  Time now to get some sleep.