Remember yesterday I shared with you a rather beat up 40 foot rig that entered the park?  Well, this morning it was sort of comical as I watched them unload a Moped from inside the rig.  That’s right, a Moped with a full tank of gas being stored inside.  Wait, it gets worse.  After they left I took a few pictures of the rig.  This is the passenger side lockers.

But the worse is yet to come.  I snapped this picture of one of the rear tires, the others are in the same condition.  Not only are these fools jeopardizing their own lives, but that of others as well.  So sad.  I hope when one of their tires blows, as we know they will, they live to tell about it and others do too.

Tonight we’re going to finish up our tour of the Stafford Air and Space Museum.  We’ll finish up with the rocket and space exploration exhibits.

We’ll begin with the Goddard Rocket.  Dr. Goddard developed and launched the first successful liquid rocket in 1926.  His invention would open the door to make space flight possible. 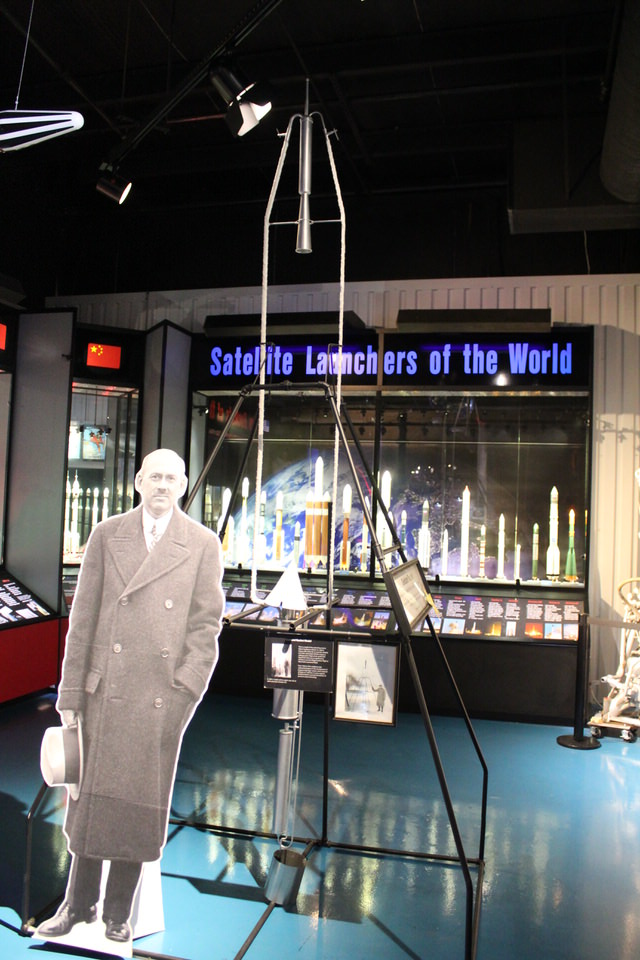 This is one of the only remaining actual V-2 rocket engines left in existence.  Captured by the Americans at the end of the war, the V-2 technology established the foundation for America’s space program and its future journey to landing a man on the moon in 1969.

This is the F-1 Rocket Engine.  This is the largest and most powerful rocket engine ever built.

Just how big were the fuel tanks for this thirsty monster?  Take a look at the technicians working inside one of the first stage fuel tanks to get an idea of its enormous  size.

This is a J-2 Rocket Engine.  Five of these engines powered the second stage of the Saturn V moon rocket, and one powered the third stage.  The J-2 was the first, large, hydrogen fueled engine, and the first to be able to be restarted multiple times during flight.

This is an actual flight ready Titan II Rocket.  This rocket was originally developed by the Air Force as an intercontinental Ballistic Missile with the capability of carrying nuclear warheads.  NASA used it to launch the Gemini spacecraft.  This specific rocket spent most of its life inside an underground, hardened missile silo in Kansas, tipped with a nuclear warhead.

This is an actual deactivated Mark 6 Nuclear Warhead of the type that tipped the Titan II rocket above.  This warhead contained one of the largest thermonuclear warheads ever built by the US.  It’s yield was equivalent to more than 600 times the explosive power of Little Boy. 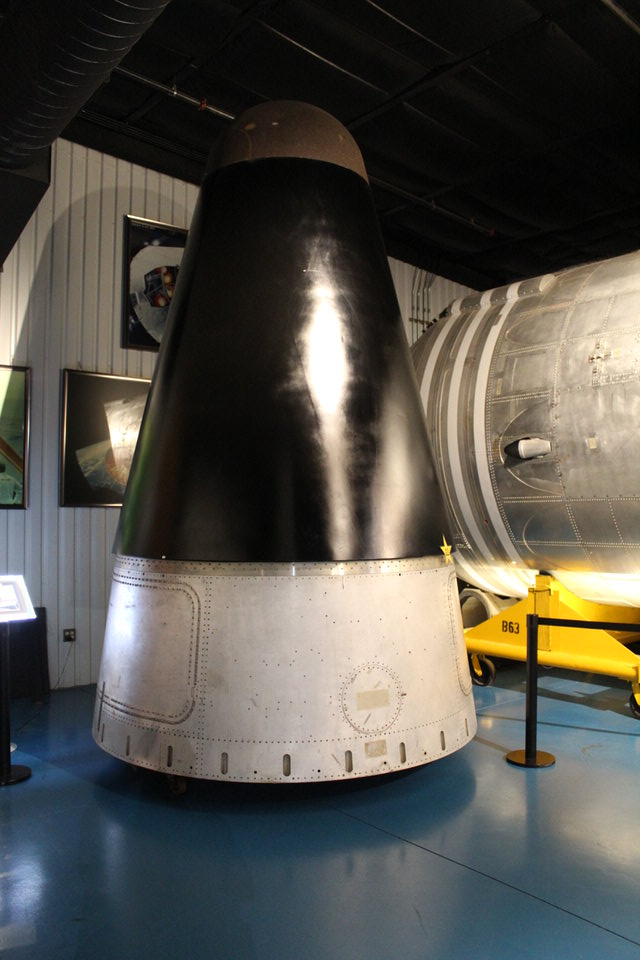 This is a Soviet NK-33 Engine.  It was designed to power the giant Soviet N-1 moon rocket.  This museum is the only place where you can see both this and the F-1 engine on display.  A total of only 3 are on display in museums today. 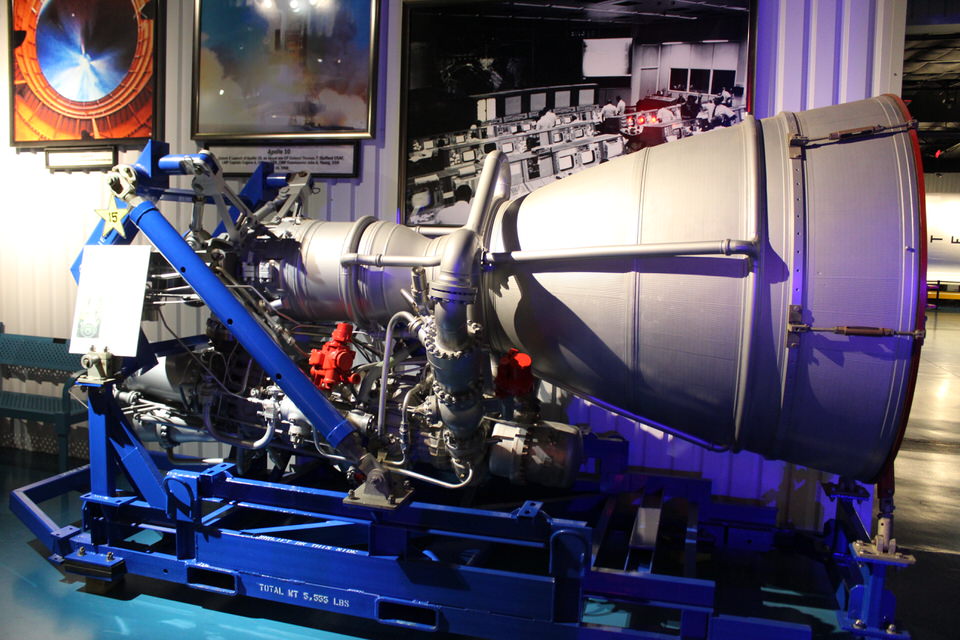 This is a complete Gemini spacecraft, as it would have appeared in earth orbit.  At the end of their mission in space, and just before reentry back through the atmosphere the two large white colored equipment modules on the back of the craft were blown off to expose the heat shield.

This is a full-scale replica of an Apollo Command and Service Module (CSM).  The CSM served as the mother-ship of all Apollo, Skylab and Apollo-Soyuz missions, including all of the lunar landing flights. 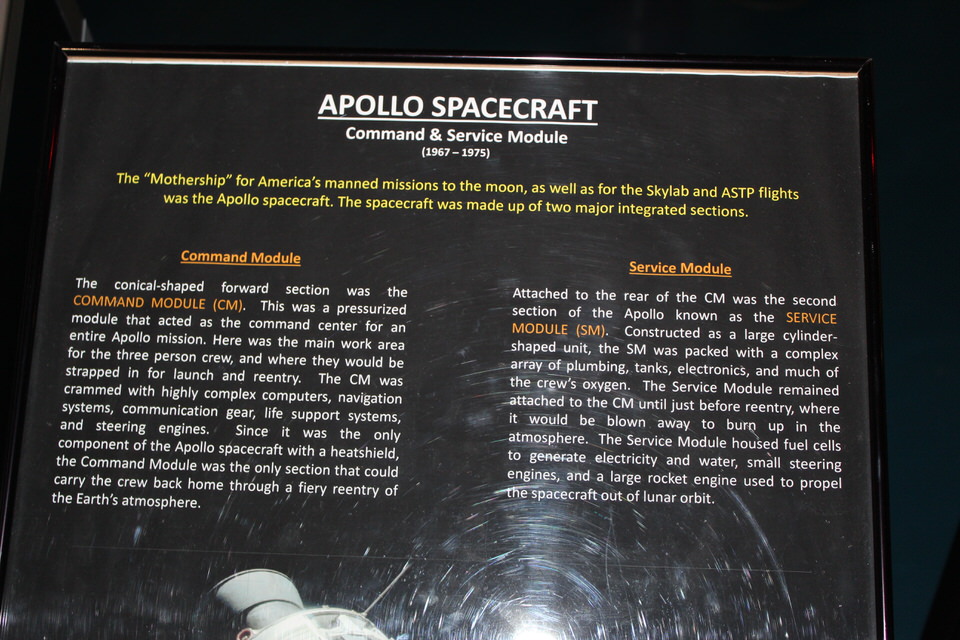 The service module (the silver section) supplied oxygen, water, electrical power, communication, and propulsion for the command module.  It is jettisoned just before reentry. 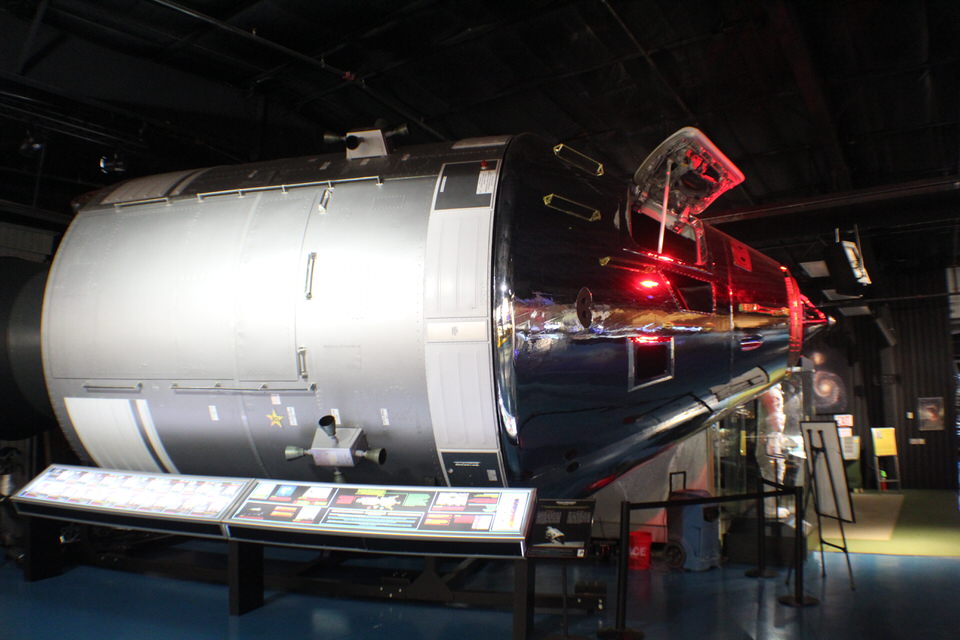 The astronauts rode in the command module during launch and reentry.  Because it had a protective heat shield it was the only launch vehicle that could return to earth.

This is full-scale replica of a lunar module forward cockpit.  This unit will soon be restored to an interactive display.  When completed visitors will be able to pilot the Lunar Module while standing in the cockpit. 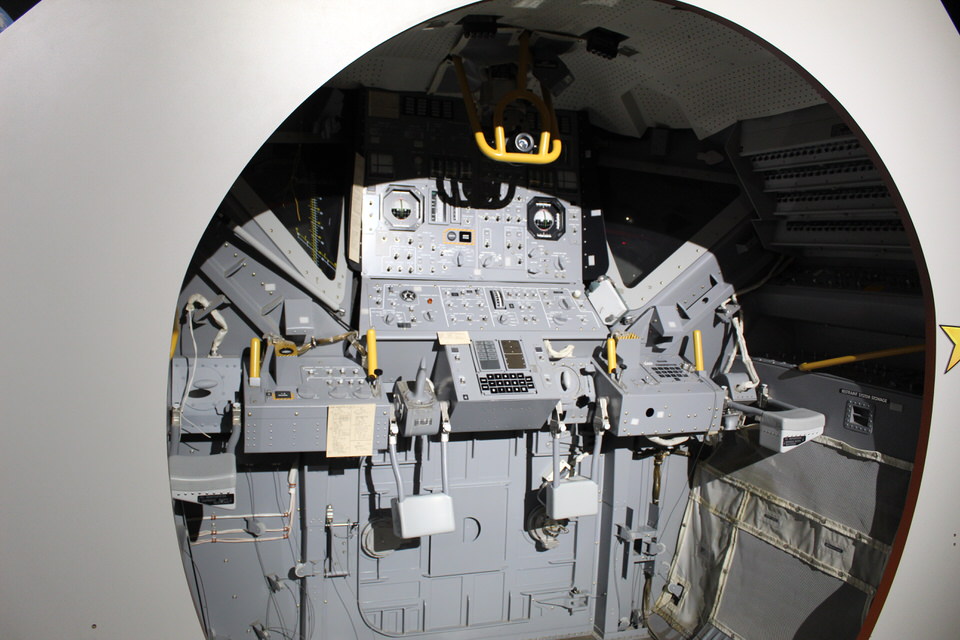 This is one of the actual flown checklists used by Apollo 10 Commander Tom Stafford to pilot the first Lunar Module to the vicinity of the moon’s surface.

This is the actual Space Shuttle Fixed-Base Simulator that was located at NASA’s Johnson Space Center in Houston for more than 30 years.  All 135 Shuttle crews did their primary fixed-based training in this simulator.  The two sections would normally be hooked together to form the Shuttle’s main flight deck cockpit.

The Fore Deck where the Mission Commander and Pilot would sit.

From the other side, the front.

This is the Aft Deck where the two Mission Specialists would sit.

Ever wonder what life would be like in space?

What food would they eat in space?

Here’s how experiments, cargo, etc. was transported in the Shuttle to space.  They used a U-shaped platform that had several points for securing heavy equipment.  This is an actual flown artifact. 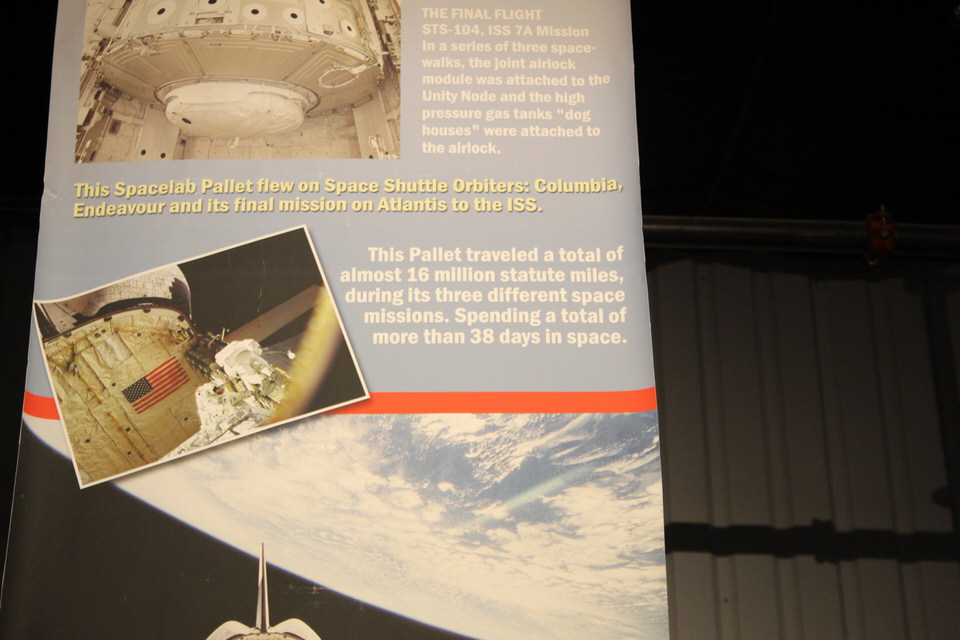 What kept the Shuttle from burning up during reentry?

Perhaps you remember the Space Shuttle Columbia disaster?  A piece of foam broke off from the main booster during launch damaging several vital tiles on the left wing.  Upon reentry the wing suffered severe heat damage and eventually the shuttle became uncontrollable and came apart resulting in the death of all 7 crew members.  The worse of it is that they were only minutes from a successful landing in Florida.

Next, we have Skylab. 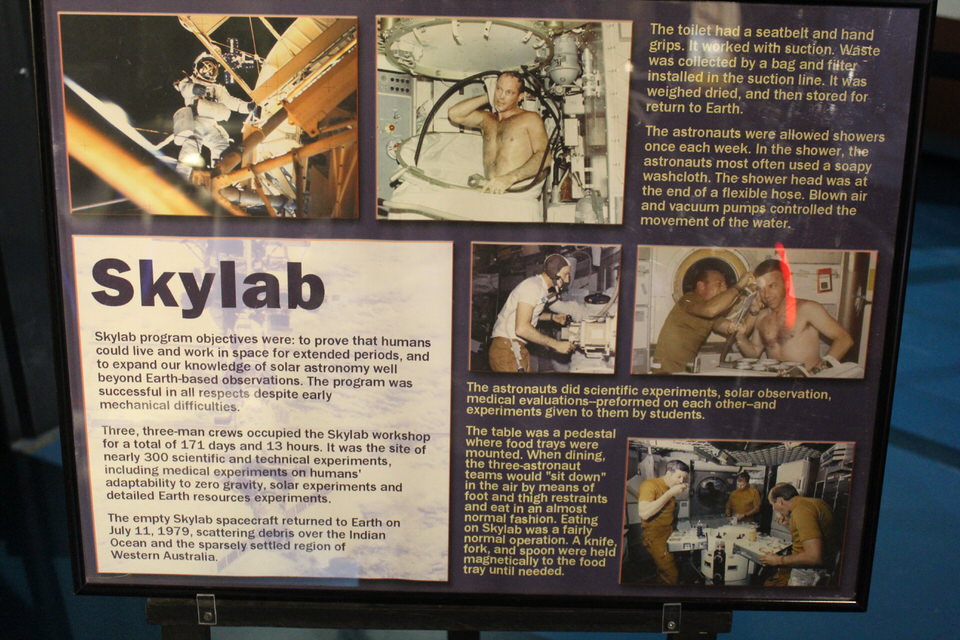 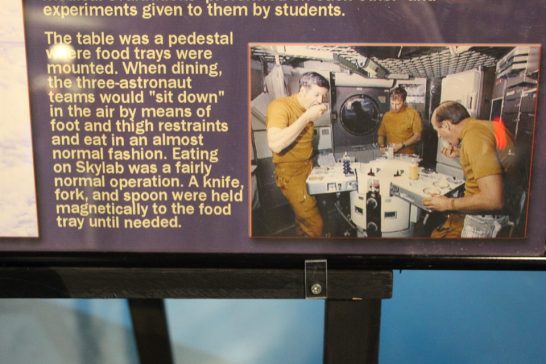 A model of the crawler on display.

This is an actual link out of one of the crawler’s motorized treads.  Each of these crawler shoes weights over 2000 pounds.

We’ve now come to the end of our tour of this absolutely amazing museum.  I’ve been in many museums during our travels and I would rank this one as one of the best.  It has so many interesting exhibits, the exhibits are well documented, and there is a Star Tour Guide which guides you through the museum in a logical manner.  10 thumbs up for the Stafford Air and Space Museum!  If you haven’t been there, put in on your bucket list of must places to visit.

That brings to end our day on The Road of Retirement.  We’ve been shopping.  Had a delicious meal of potato pancakes.  Finished the blog on the Stafford Museum.  Time now to pack and get ready to move out tomorrow morning.  Yes, we’re on the move again.  We hope to stop tomorrow at White Sands Visitor Center before going on to the Escapees Park in Deming.  Till then.

Thanks again for joining us today.  We always appreciate your company and comments.  Catch you tomorrow.