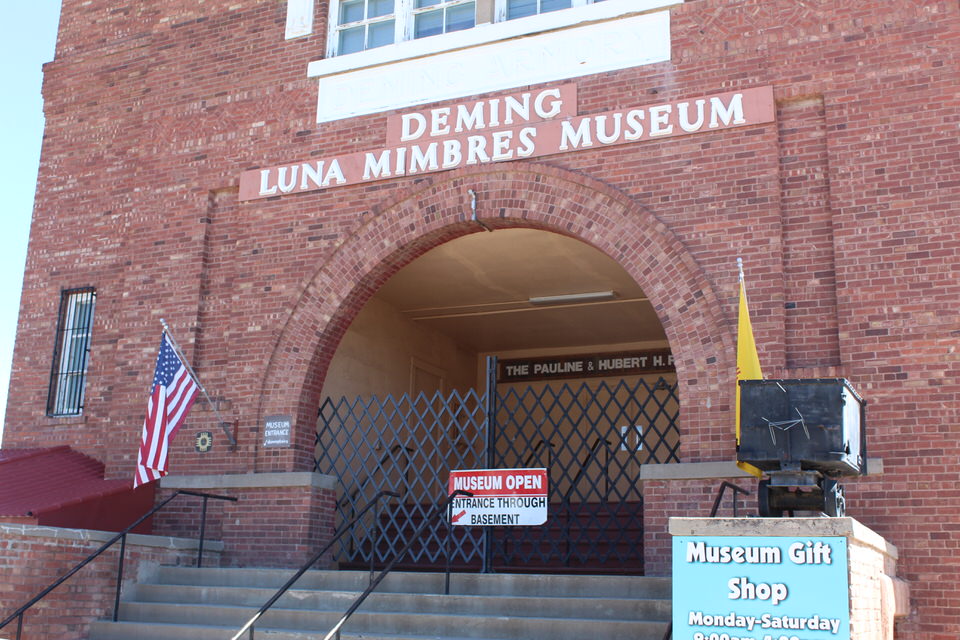 What a beautiful morning we awoke to.  Fall may be the season but the temperatures have not gotten the message yet.  It’s been very comfortable at night, still a bit warm during the day.  Today, in fact, would prove to be one of the warmest.  No complaints, though, from either one of us.

This morning I coated the front TV access panel with polyurethane.  Once it dries I’ll put it back up the right way.  Probably tomorrow.

We decided today to visit the Deming Luna Mimbres Museum.   We both figured that this being Deming how big could this museum be?  We’ll be in and out in probably no more than an hour.  How wrong we were!  Three hours and we still really had not gotten to everything.  The museum is housed in a former Armory that in the past served as a community social center and USO activity center.  Luna County Historical Society purchased the building in 1977 and transformed it into the current museum.

Inside the entrance door we noted this quilt, yes, this is a quilt.

Just inside we entered the first room which offered an overview of Deming and some of its residents.

Deming’s Flying Grandmother.  Marget Todhunter had a practical reason for wanting to fly, she had a 50,000 acre ranch to manage.  She first covered the ranch by horseback, later by car but she knew there had to be a better way.  With a plane she reasoned she could do in minutes what had taken her hours, even days in the past.  Though she turned out to be an excellent pilot, she had an utter disdain for flying terminology.  She never flew a plane rather she drove the plane.  The flaps were not flaps but brakes. 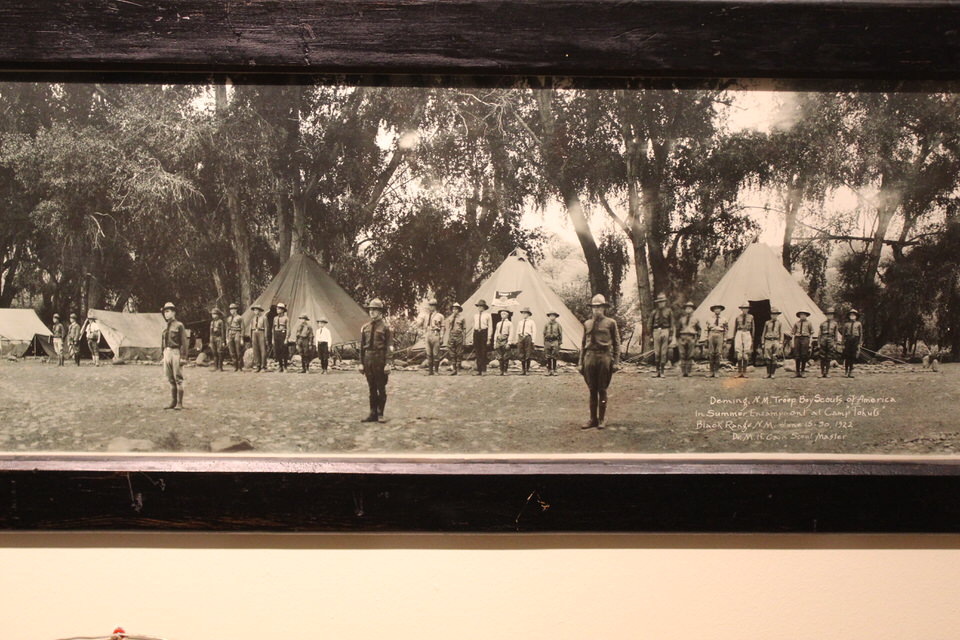 The Deming Cody Theater Fire of 1918.  The fire started in the Deming garage when a worker threw a lighted cigarette on an oil soaked wooden floor.  Though those in the garage tried desperately to extinguish it, it quickly got away from them.  The fire wiped out a good portion of then downtown area with the greatest losses sustained by Sam Watkins who owned the local car dealership.  Unfortunately, he was not covered by insurance.  Witnesses stated that had it not been for the prompt assistance provided by the Camp Cody fire department the blaze would have been even worse.

A bit further into the museum we discovered some more pictures of Deming’s past on this exhibit.

Some pictures from the past. 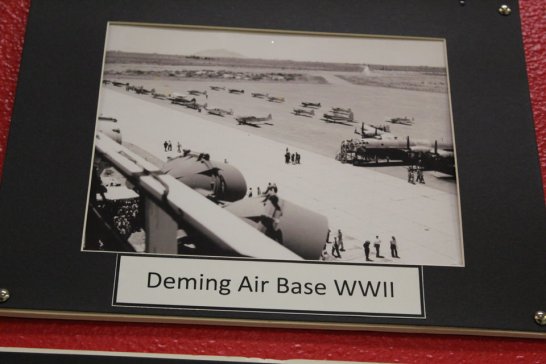 Moving on, the next room we entered and explored was the Southerland Doll Room.  In here we discovered dolls carved by pioneers, elegant German made dolls, storybook dolls, and a rare doll discovered in the rubble of Hiroshima after the Atomic bomb had been dropped on it.

This is Suzy adoll discovered by a sailor in the rubble of Hiroshima after the Atomic bomb had been dropped on it.  He put her under his coat, returned to his ship, and ultimately brought her home with him to the states.

Two dolls – a shoe maker and a wood chopper – hand carved out of Linden wood by an early resident of Deming. 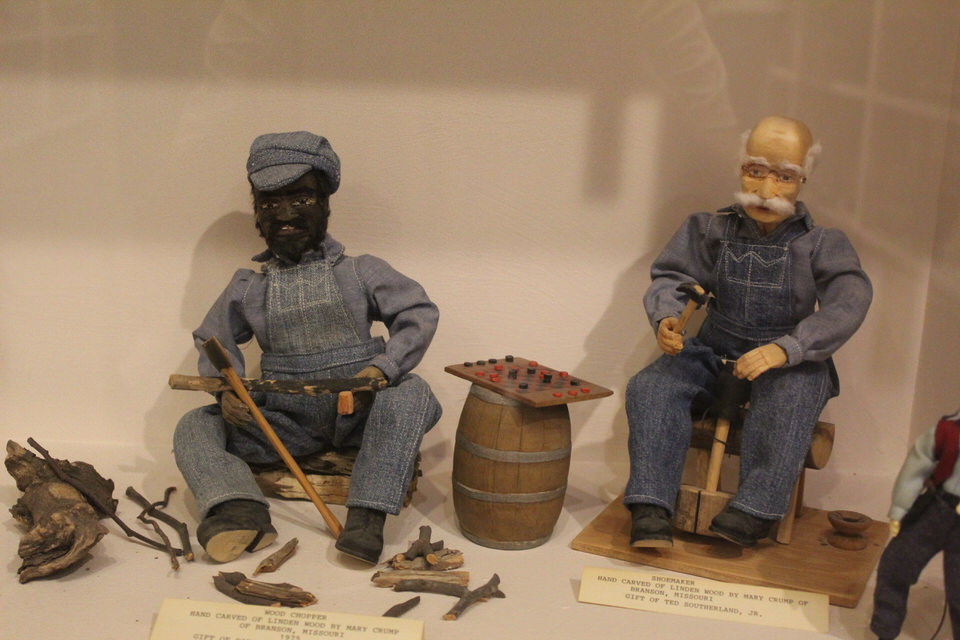 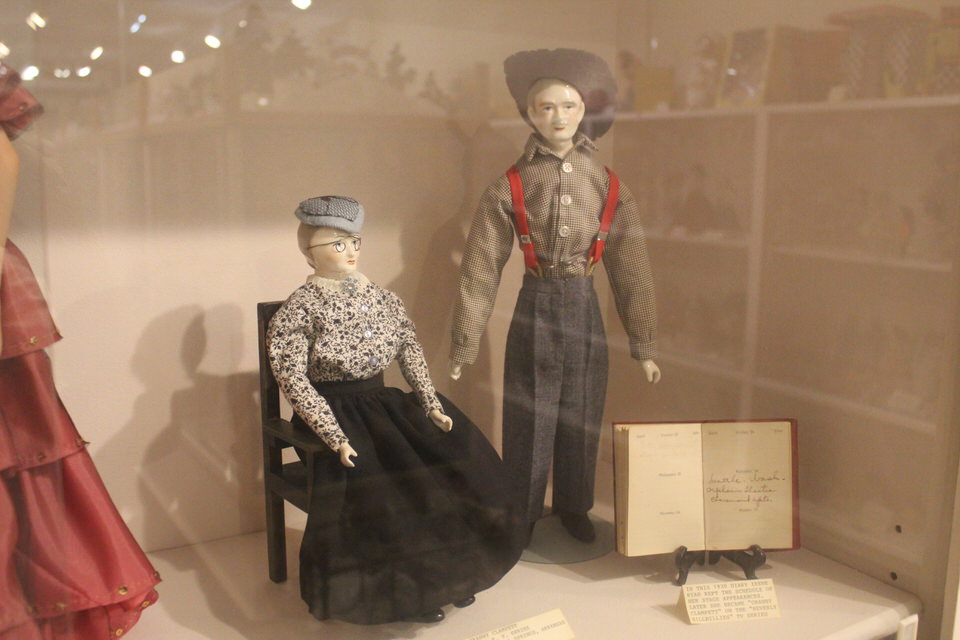 Ginny Dolls.  They reminded popular until the 1960’s when a new doll by the name of Barbie replaced them in popularity. 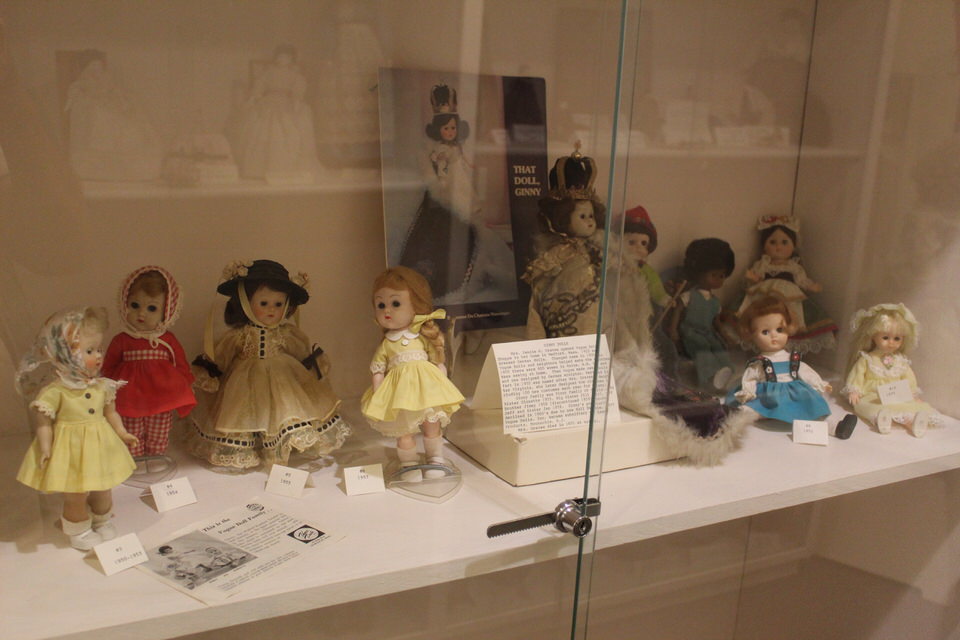 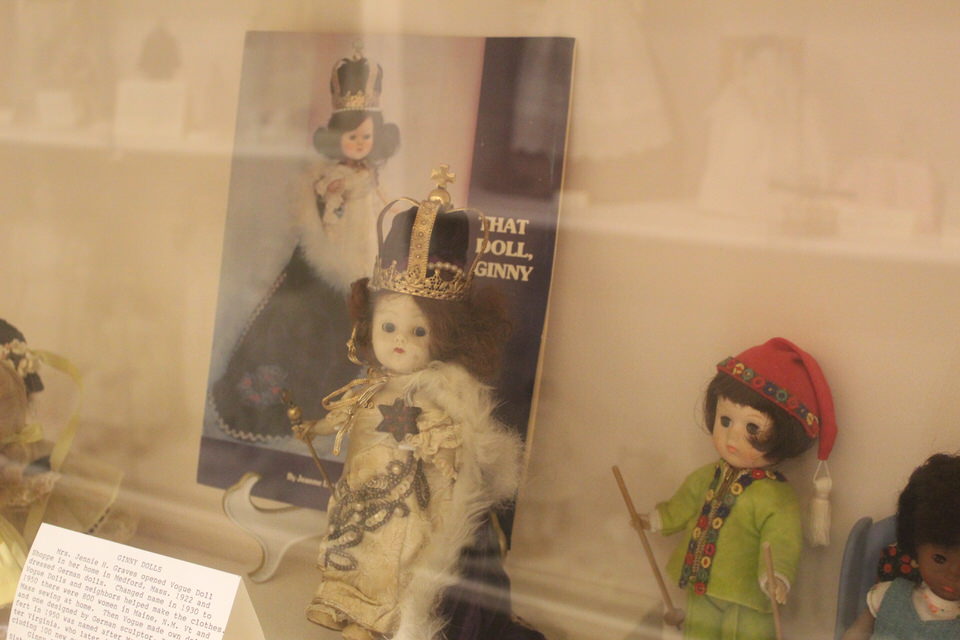 Dolls from around the world. 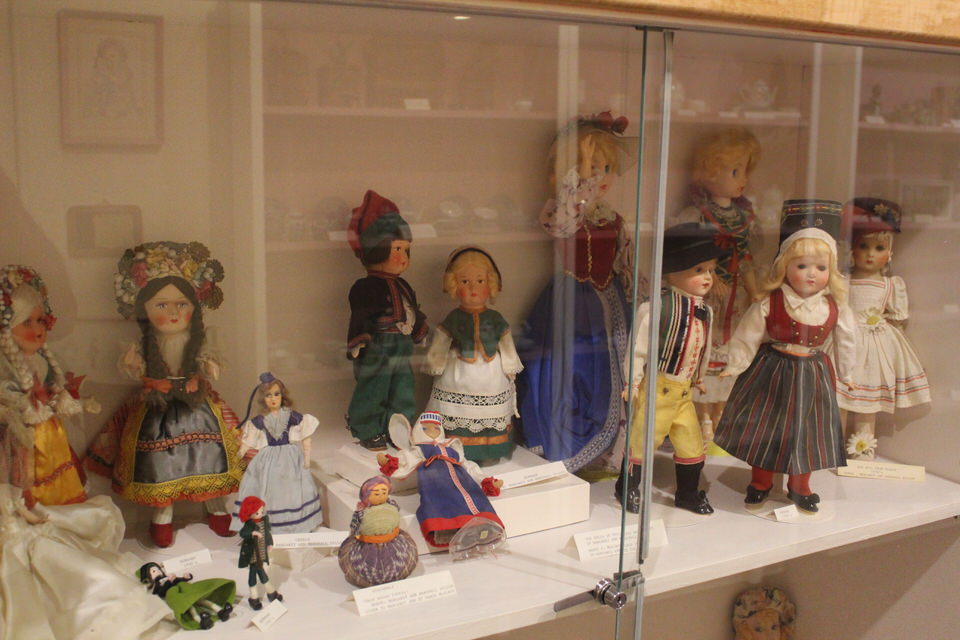 We have so much more to cover in this fantastic museum but right now we’re going to move outside and cover Veterans Park.  We’ll return to the museum tomorrow.

This is Veterans Park which is next to the Museum. 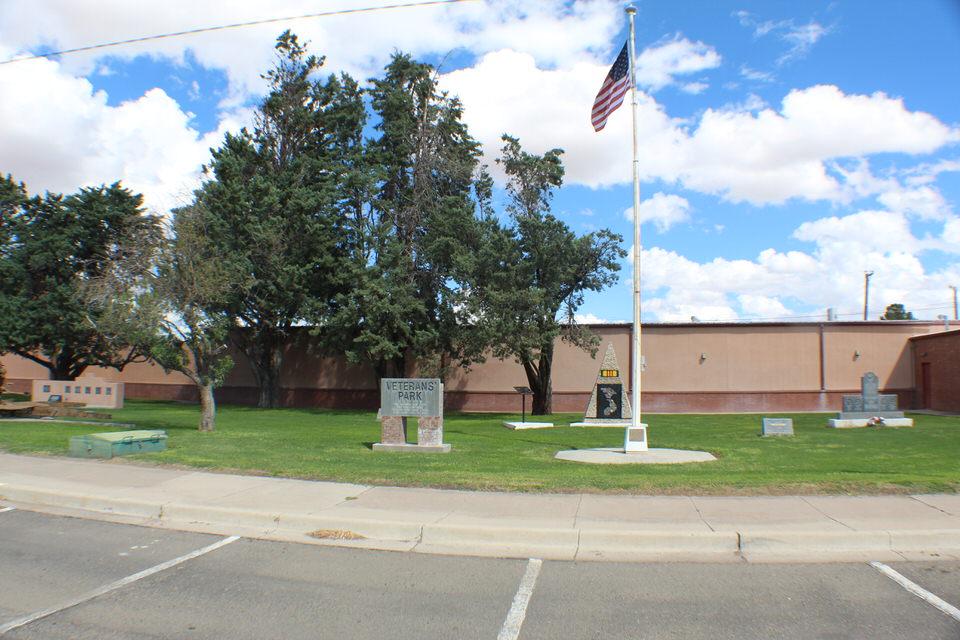 From here on I’ll let the various monuments erected tell their own stories. 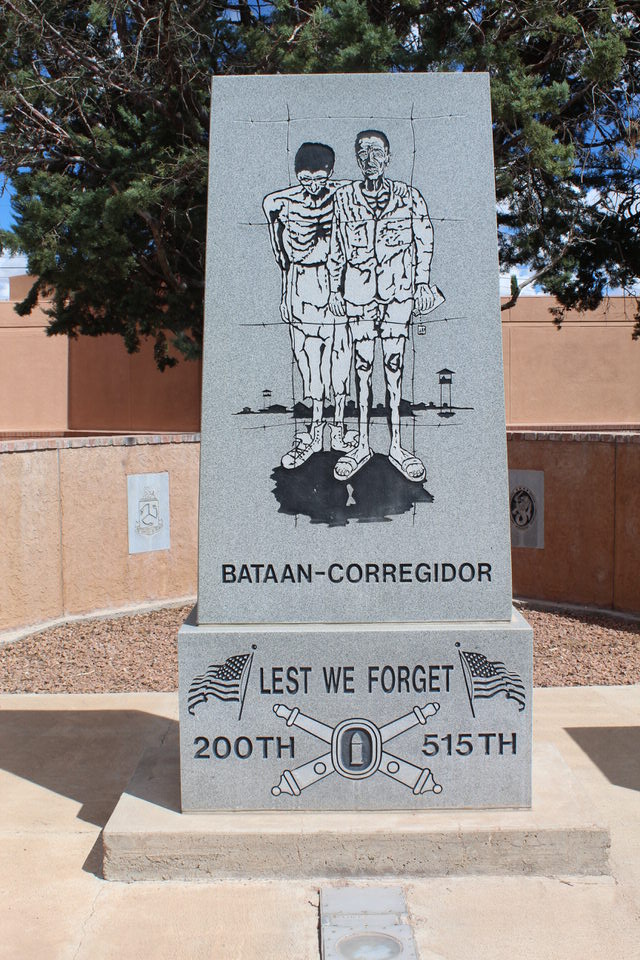 We’ll move back to the Museum tomorrow.  We have the story of Deming to tell, we’ll go to the Art Room, cover the Indian Exhibits, the Hispanic Room and more.  We also have the Custom House to visit and the Visitor Center.  Stay tuned.

Now we’re going to lunch.  Enough of the fast food restaurants we wanted an authentic Mexican Restaurant.  We asked at the Museum if they could suggest a place and this is where they sent us.

Guess who is holding up the menu?  Still the cutest one around.

We discovered only one issue with this restaurant, their Spanish is much better than their English.  Of course.  We both ordered what on the menu was Combination Three and guess what we ended up with Combination Four!  No problem, we both again joined the Clean Plate Club.

Our day on The Road of Retirement has ended.  It’s been a full and exciting day of new discoveries and yummy food.  You can’t go wrong with a day like today.

Thanks again for joining us.  We always appreciate your company and your comments.  Catch you tomorrow.