Did you catch the temperature?  This part of the country is one of wild extremes.  It is desolate, deserted, and rimmed with rugged, majestic mountains.  The temperature also varies wildly from day to day.  It was 93 degrees yesterday, today it struggled to get to 70 degrees.  My opinion?  I like it this way.  Warm enough during the day, nice and cool for sleeping at night.

Rain began to fall off and on as soon as we got up.  I had enough time, though, to go out and get my tools so that I could finish up the TV Access Panel Project I started a few days ago.  The cabinets have been reinforced and tied back into the vertical supports.  The access panel is now stained and coated with polyurethane and put back up the proper way.  Take a look. 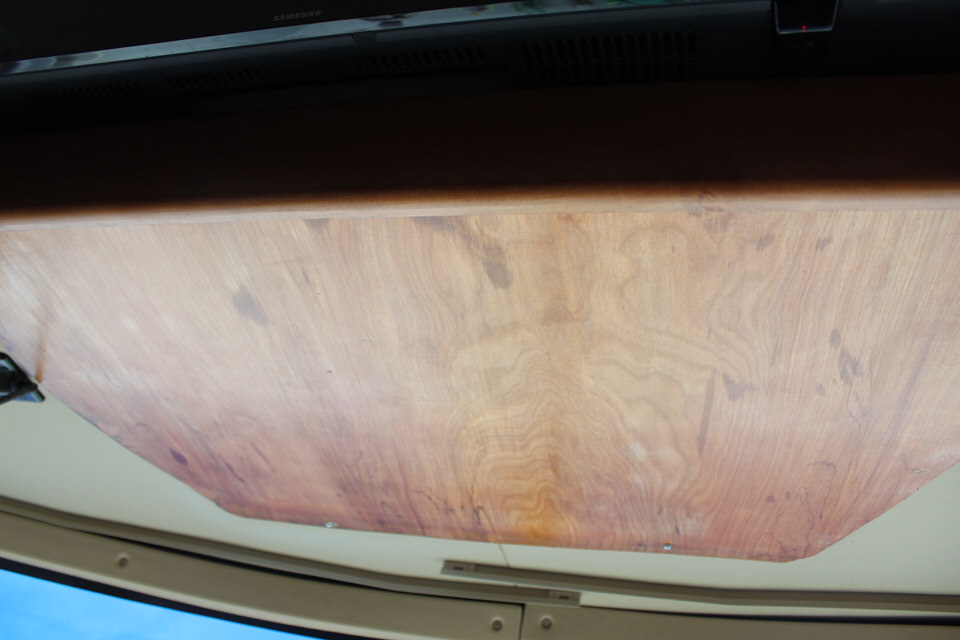 My lone lobster and my collection of turtles have been reinstated to their proper position on the dash.

I puttered around doing a few other odds and ends.  I started the generator then checked the oil.  I needed to add the remainder of the 2nd quart.  Tried to figure out how to get the spark plugs changed – not going to be easy.  Took a look at the fuel filter, I’ll change that in a couple of days.  I’m trying to decide if I should change the fuel pump as well since they are known to be a problem on older rigs.  I believe I’ll order one and just keep it handy.   I then went around and lubricated the slide tracks for various windows.  OK, enough of that time to go back to the Museum.

The history of this area dates back some 1,000 years when the Mimbres Indians lived in villages along the Mimbres river.  The Mimbres River s a 91-mile-long river that forms from snow pack and runoff on the south-western slopes of the Black Range and flows southward into what is today the Deming area.  Primitive though they were in other respects they were known for their unsurpassed skill in making and decorating pottery.  They were especially known for their paintings of native animals which made their pottery distinct and easily recognizable.  To accomplish the fine detail they painted with a brush made from the Yucca leaf chewed to a fine point.

An exhibit dedicated to their pottery.

Other pictures of their exquisite pottery. 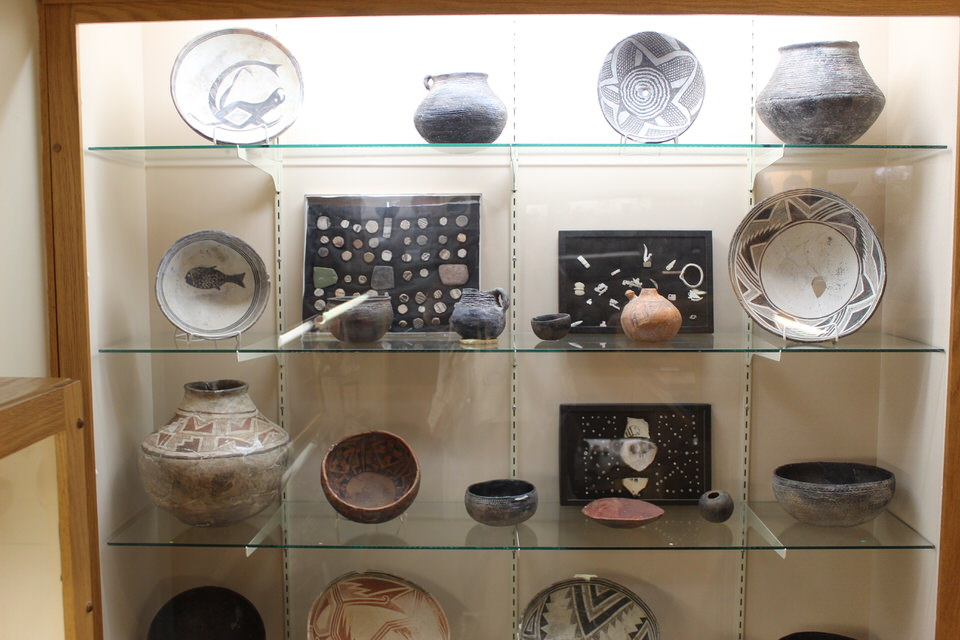 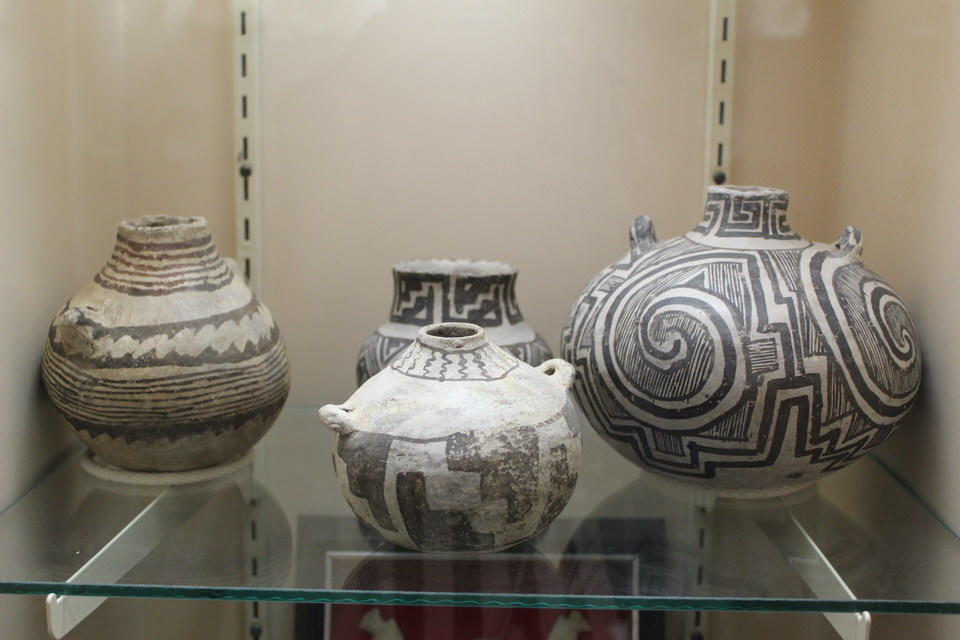 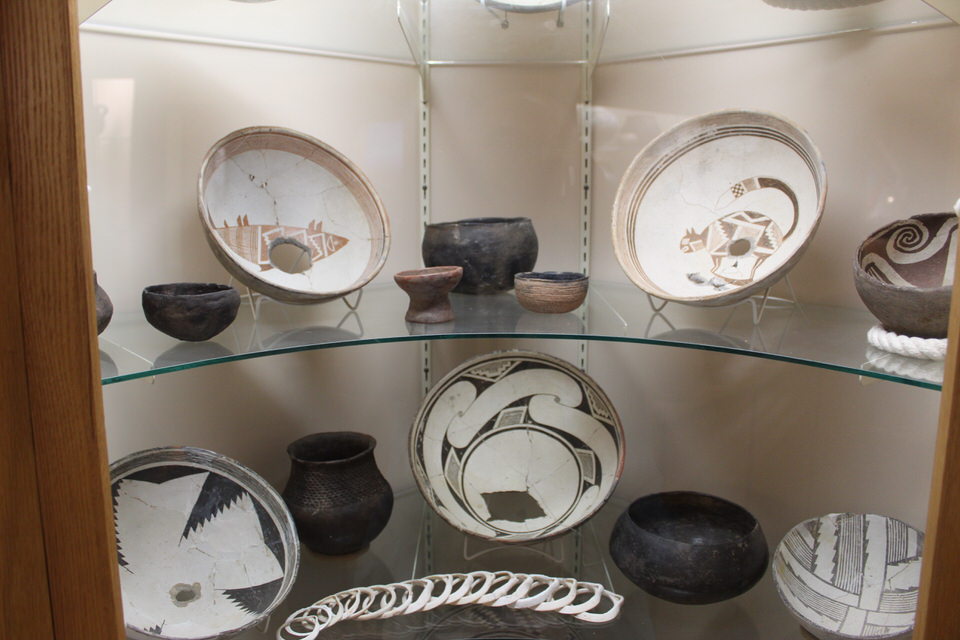 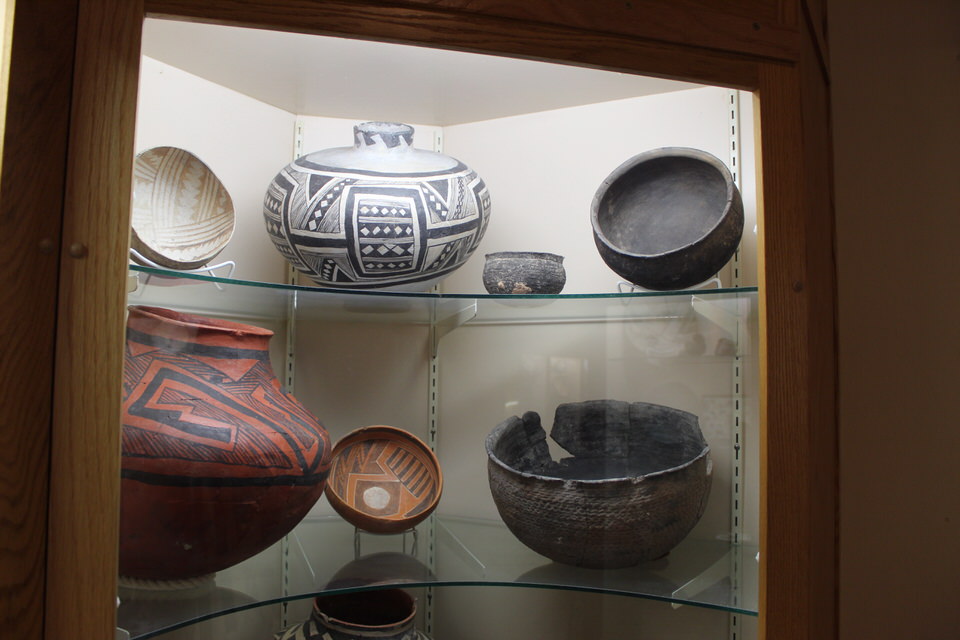 Other exhibits in the Indian Room.

Another Navaho rug made from all natural color yarn.

If this rug could talk.  Not familiar with Madame Millie?  Google her, she has a most colorful past. 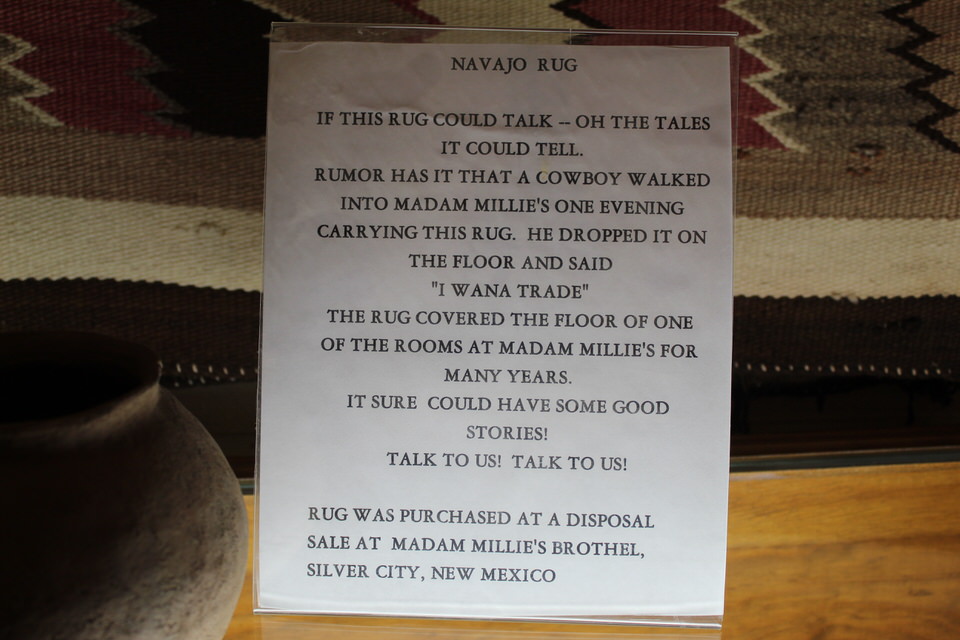 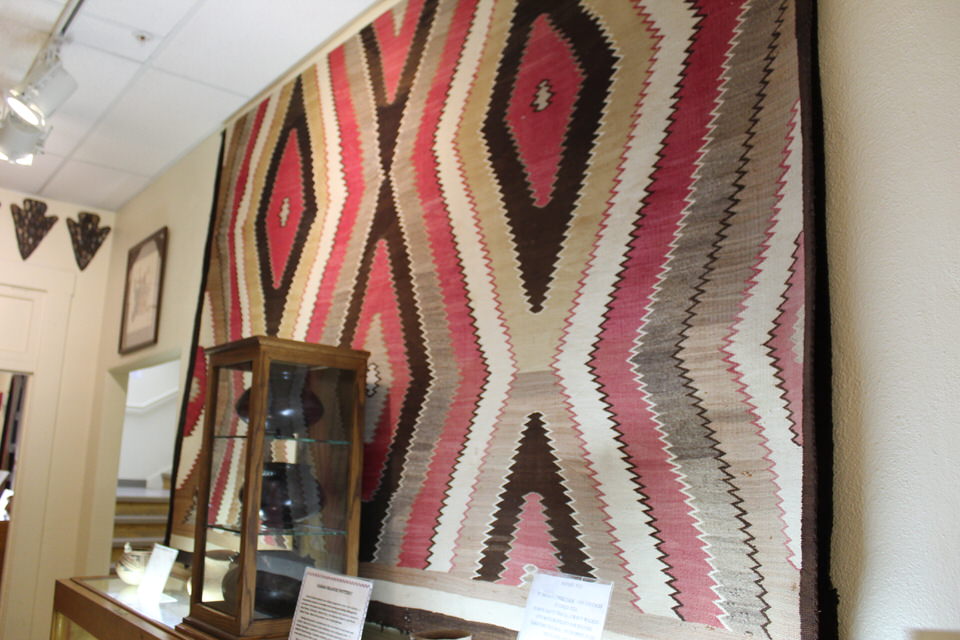 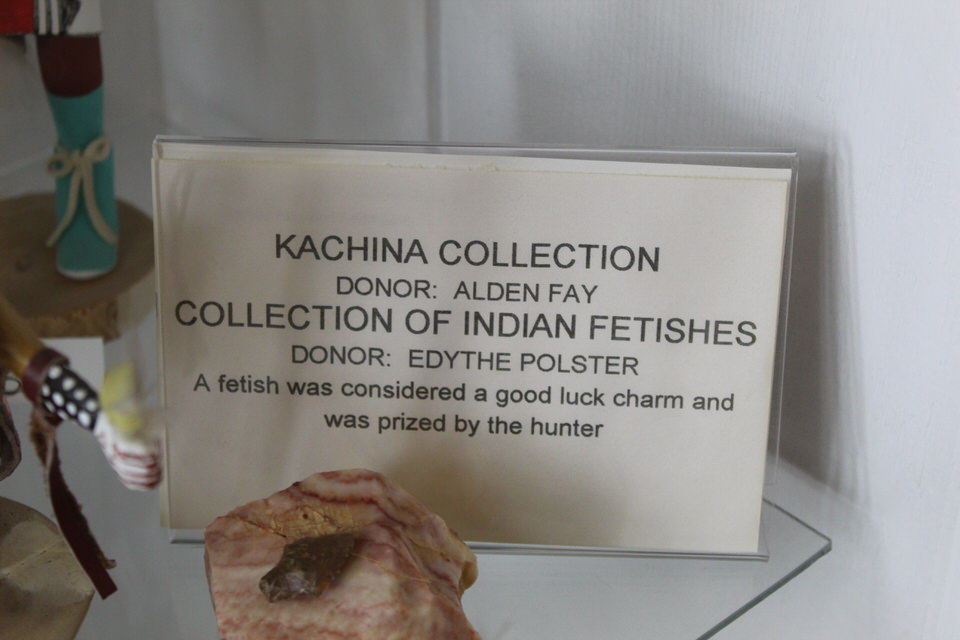 I gave this one the title The Thinker.

We’re moving now into the Cowboy Exhibit.  The cowboy rode across the pages of American history from 1860 to 1900 the time of the great cattle drives and the open range.  They came from all walks of life, former slaves free at last to work a life of their own.  Mexican vaqueros who knew how to handle a herd.  Preacher’s sons and farm boys, renegades and men running from the law.  Masters of no man and beholden to none, they signed on to follow the herds.  They rode the dangerous trails from nowhere to nowhere.

Where the cowboy went so did the Chuck Wagon. 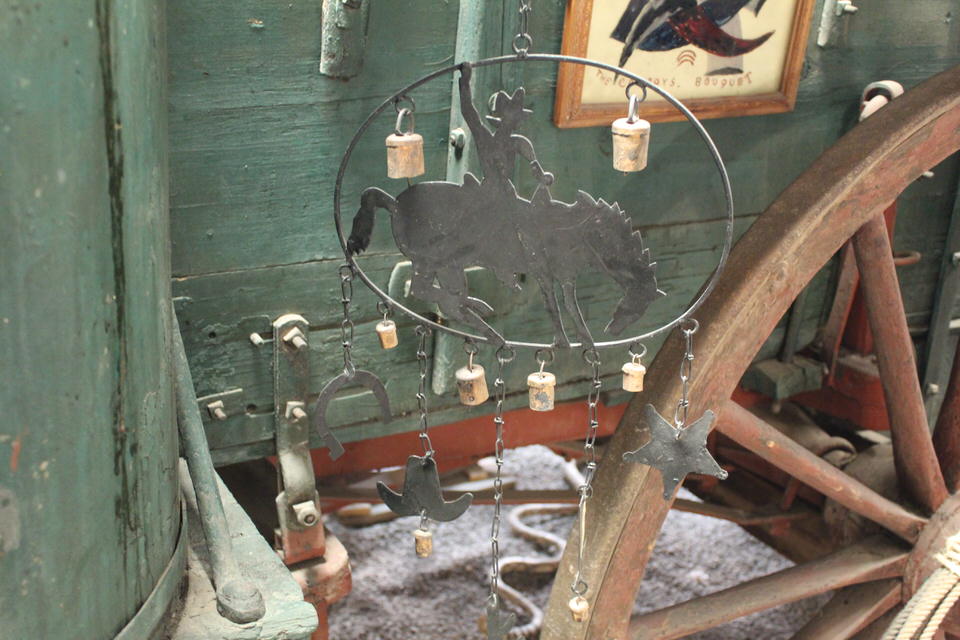 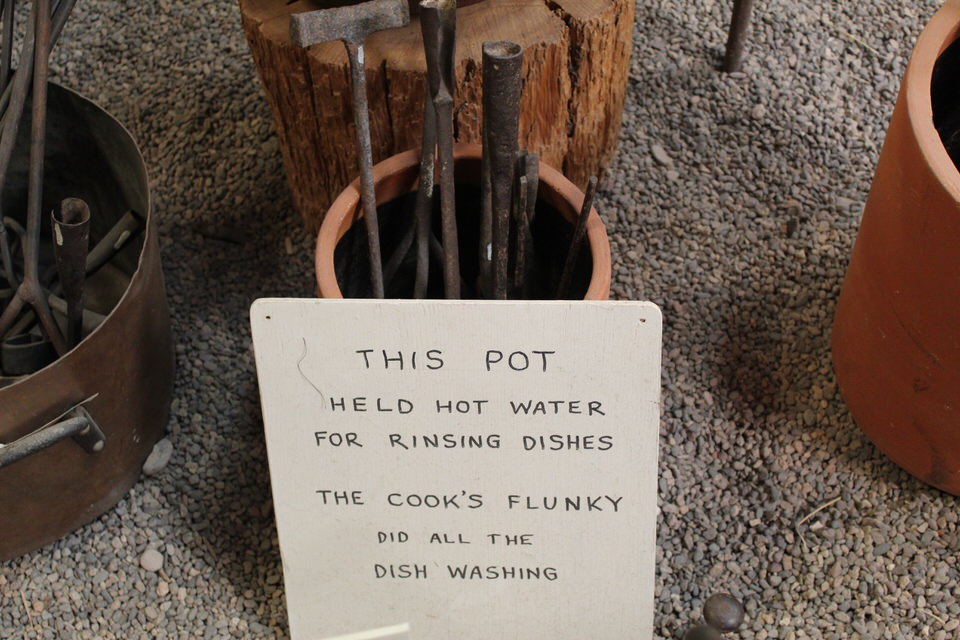 From eating to sleeping. 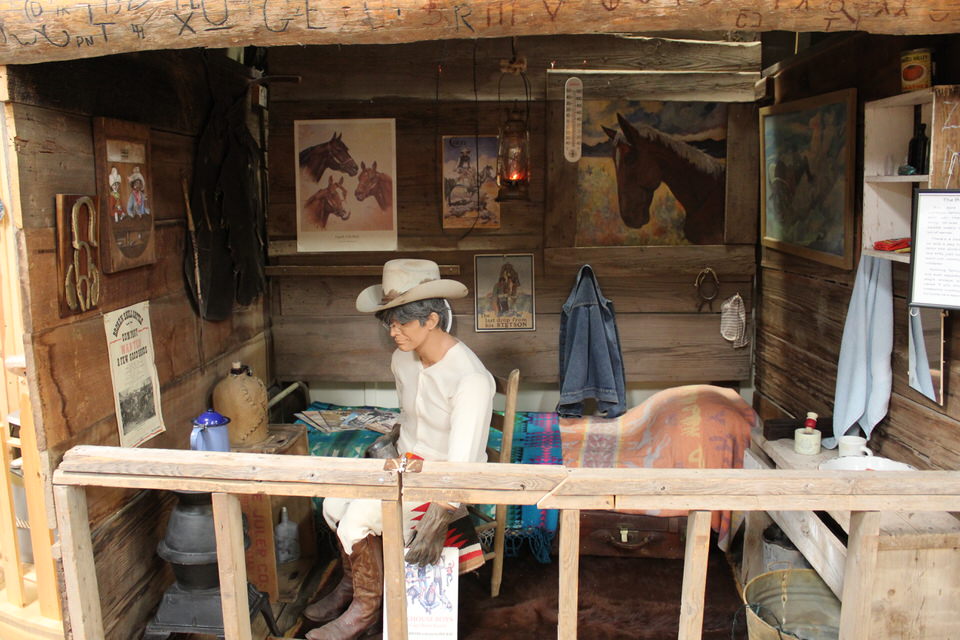 This log was on the mantle of the Roundup Lodge in Deming.  As cowboys returned they would carve their initials on it and the brand of their ranch.

My kind of hat.

Every hat here was actually worn by someone and every hat here has the name of that person pinned to it’s brim. 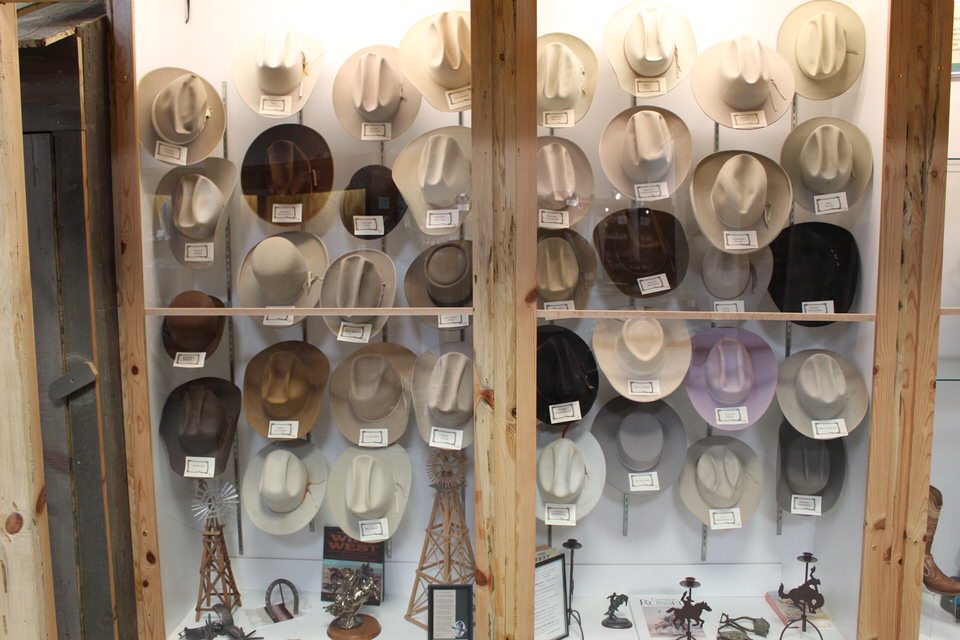 A neat piece of sculpture.

We’ll end with one more exhibit tonight.  This is the Hispanic Exhibit.

A Mariachi Uniform and a Ballot Folkloric Dress.

Some of the other exhibits in the room. 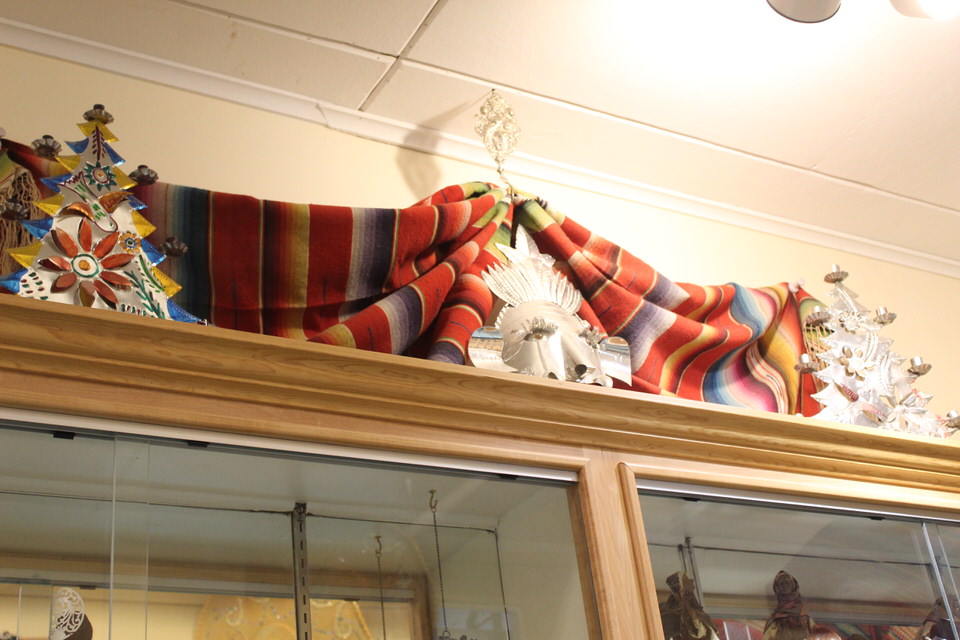 We’re going to end here tonight.  Oh yes, there is much more.  The next time we’ll get into the history of Deming, the place that the railroad played in its formation, and we’ll view more exhibits from the remainder of the Museum.  Stay tuned there is so much more to come.

That was our day on The Road of Retirement.  Once again a few more projects were accomplished.  The day itself was cool and rainy from dawn to dusk.  No complaints, however, from us.  We spent the day together and enjoyed one another’s company and the day that God had given us.

Thanks again for coming along we enjoyed your company.  All and any comments also appreciated.  Catch you tomorrow.