Team Night Out – The Pita Palace

The nice, beautiful, cool, crisp mornings just keep coming one after another.  I can really get used to this.  In fact, I believe I have.

Regarding breakfast this morning, honestly, we both were still full from the night before.  Thus, a simple English muffin with peanut butter and strawberry jelly, a glass of orange juice and a cup of coffee was more than enough.

Then we started singing our song, We Volunteered, we volunteered, so off to work we go!

What were we up to today?

Keith and Mark continued building shelves.  We kiddingly call this the Dairy Project telling the two of them that they are milking this project for all its worth!  As you can see, one section of shelves is up, they are now working on the second section.

In the same building

Myself, and the three amigos – beginning from the back, Anton, Bob, and Robin -finished touching up the walls and doors on the second and third floor of the main housing unit.

Then we come to the ladies on our team.

Barbara at one table

Debbie, Sandy and Kris at another table

As well as Leone and Carrie at yet another table were busy wrapping gifts.

I’d say they got quite a bit done.  There were these gifts ready to go

In addition to these bags and boxes.

More clothes came in so they also spent the day

as well as sorting and hanging men and women’s clothing.  This is just the beginning, next week it’s going to be all hands on deck for sorting toys and clothing!

Volunteer’s from Bank of America made and donated these and many other Ginger Bread Houses for the upcoming UMOM staff Christmas party.

Week Two, Day Four is in the books.  Everyone had a project or projects to do during the day.  Funny, just when we think we have nothing more to do something always comes up.  That’s just the way it is.  Really, we wouldn’t want it any other way.  We’re here to do.

This being Thursday it was time for Team Night Out. 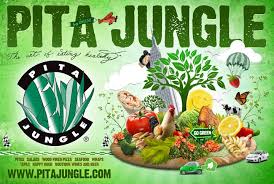 This was the place for supper tonight.  Would you believe I forgot to bring my camera?  Not to worry here are some stock photos of where we went. 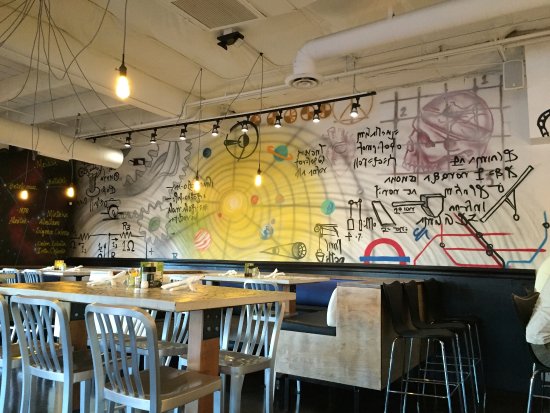 It was a really neat restaurant so full of amazing creativity and artwork throughout the entire place.  The food was great and time with the team in a relaxing atmosphere was the icing on the cake.

That was our day on The Road of Retirement.  It was another full day from dawn to dusk.  We must admit, we’re sure glad we’re off now until next Monday.   Time to give sore muscles and aching backs time to rest.  But lest you think we’ll be doing nothing, perish the thought.  We have a number of projects to accomplish here at home.  We may even squeeze in a day of sight-seeing.

Thanks for tagging along with us today.  We always appreciate having you with us as well as reading your comments.  Catch you tomorrow.