There is something seriously wrong when the temperature in our home town of Howell, New Jersey is in the 60’s at night and we are at 39 degrees!   I still don’t understand why this a snow bird destination.  Be that as it may we’ll tough it out and make it through.

Out and about in our community we discovered

A cactus in bloom.

A different kind of bug.

Yup, a turtle, and flowers that never need to be watered.

We have one more fascinating, wacky, and totally out of the ordinary place we discovered.  Yet one that people from around the world have visited and continue to visit.

We noticed these buildings off to the right while we were on our way to the Plank Road.  What first caught our eye was the brilliant white church in the background.

Then we noticed this sign.  What in the world?  This was just too good to ignore.  We promised ourselves that on the way home we would take time to discover what this was all about.

A little internet research showed that this had something to do with Felicity, California. 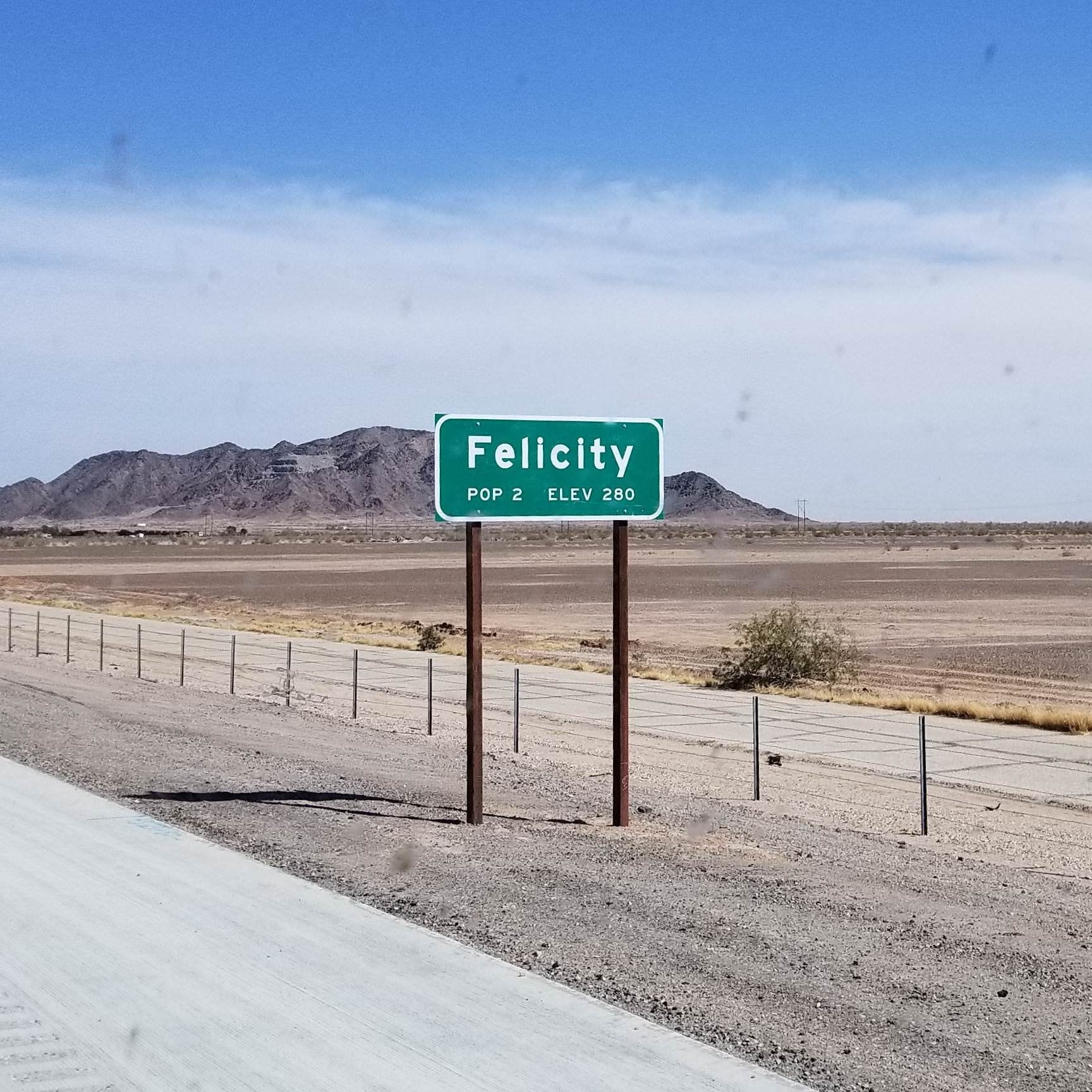 Exiting the highway we next noticed this sign.  This was starting to get interesting.

A little further down the road we saw this sign.  This was getting even more interesting.  But wait, there’s more.

Now we really wanted to know what this was all about.

Then we were there, downtown Felicity.

What in the world is going on here?  This is what we learned during our visit.

Everything here is the work of Jacques-Andre who saw this barren wasteland while serving as a Marine in the Korean War. He fell in love with it, and, with money made from his successful parachute schools business, bought thousands of acres stretching from I-8 northward to the Chocolate Mountains. I told my wife, I don’t know what I’m going to do with this bare land, but it has to be entertaining, he said.

It wasn’t until the 1980s that he finally found an idea that piqued his interest, one that has now left a permanent impression on the landscape.

First, Jacques-Andre wrote a children’s book which helped convince Imperial County, California, to legally recognize a spot on his property as the official Center of the World.

Next, he had the town of Felicity incorporated, naming it after his wife, Felicia Lee. To our knowledge, it’s the first town in America named for a Chinese lady, he said. Felicity’ means ‘ happiness, culture. 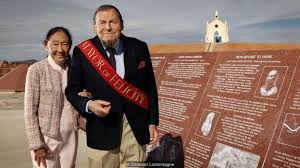 An election was held, and Jacques-Andre became the first mayor of Felicity by a unanimous vote.  It is a position he has held ever since.

The Mayor needed a way to mark his Center. Felicia had the idea: Why not build a pyramid.  Her husband was delighted, and had a 21-foot-tall, hollow, mirror-lined, pink granite pyramid constructed.

This The Official Center Of The World which is a dot in the center of a bronze disk set into the pyramid’s floor.

Standing on the spot is an occasion for ceremony in Felicity,

with a town official recording the exact moment on your certificate and ordering you to make an obligatory wish.  So we each in turn stood on the spot and made a wish.

halfway from the equator to the North Pole (during our trip to St. Croix in Maine).

Back to Felicity.  The Mayor of Felicity was just getting going.  He next decided to build a church for his town.

Since it is the house of God he decreed that it must sit on the highest spot in town. Jacques-Andre had 150,000 tons of earth trucked in and piled up into what he calls the Hill of Prayer.

Oh yes, it is the highest spot in town!  I’m proud to say I made it up, and of course back down.

You can’t help but notice this as you enter the parking lot.

This is a set of 25 ft. high stairs which don’t actually lead to anywhere, yet just act as a sculpture. The stairs are section number 12 of the original stairway of the Eiffel Tower. The stairs weigh 6,600 lbs and required engineering and a building permit to install.

Ah, I almost forgot.  Felicity also has its own

It was dedicated in December 1987 when thousands of small post offices were being closed. This tiny town of 2 received over 2,300 letters mailed the dedication day. It’s operated by the town at a staggering cost of $1 to the Federal Government per year.  All of the checks to date have not been cashed.  They are framed and mounted on a wall in the Post Office.

There’s more to this roadside attraction but I’m going to call  it for tonight.  Indeed, the most interesting attraction in the town of Felicity is yet to come.

Our day on The Road of Retirement has come to an end.  Barbara is sitting in her recliner wrapped up in a blanket with the heater by her feet.  I’m sitting in my own recliner writing this blog.  And we are both watching Murder She Wrote.  It has been another great day.  Barbara got some shopping done.  I vegged out watching football games.

Thanks for checking in with us again.  We always appreciate your company and your comments.  Catch you tomorrow.