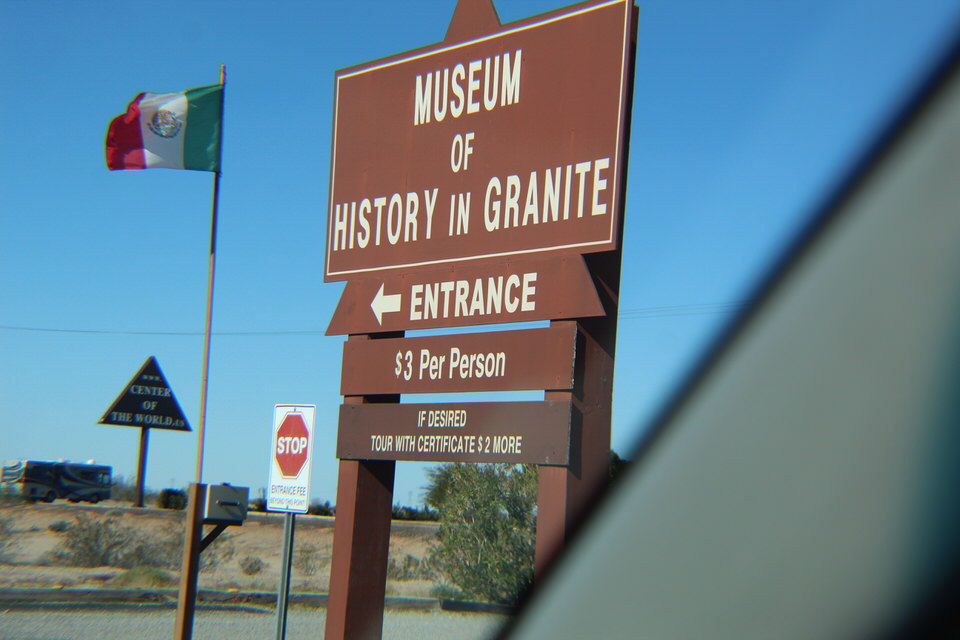 Out With The Old Mattress – In With The New Mattress

This RV Resort is absolutely fascinating.  People here take great pride in their sites which is reflected in the pristine state of each lot.  I absolutely love walking around and noting what decorations they have put out.  Here are a few more. 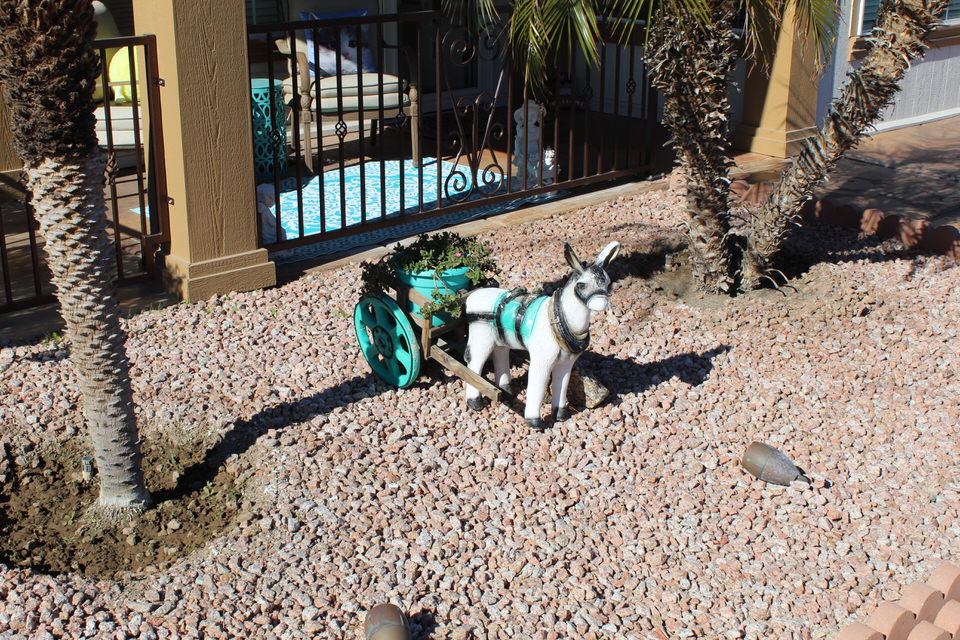 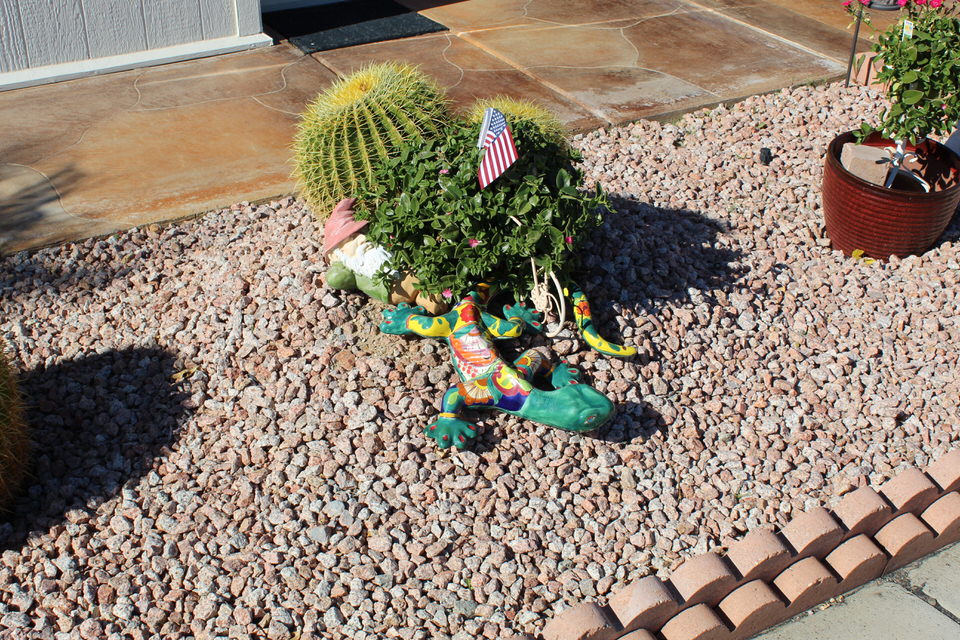 A Gila monster planter, a chili pepper, and a gnome taking a nap. 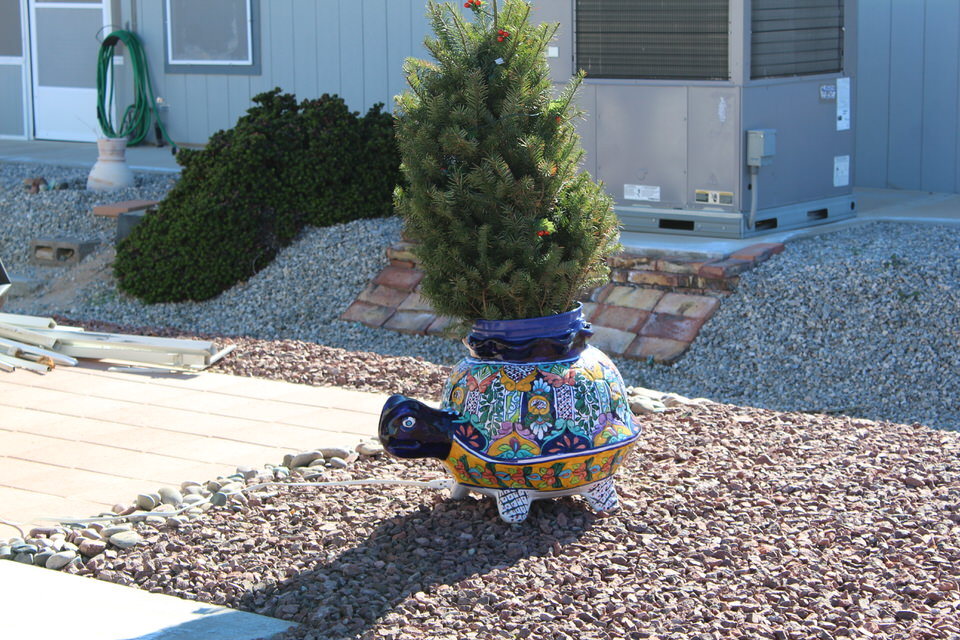 We’ll end with – you guessed it – another turtle.  This seems to the number one decoration around here.

Today was the day.  Time to drag out

the old mattress which we’ve had since 2017.  The problem has been, well, the problem is we never really thought about what we were purchasing back when we decided on a new one.  Actually, this one is on me.  Sadly, I found out the hard way that a rather thin memory foam mattress is not the best for us.  Our backs have paid the price.

We’re now ready for the new.  Would you believe the only thing that we could do with the old one is throw it out.  Not even Goodwill would accept it.

All eighty pounds still rolled up but in the door. 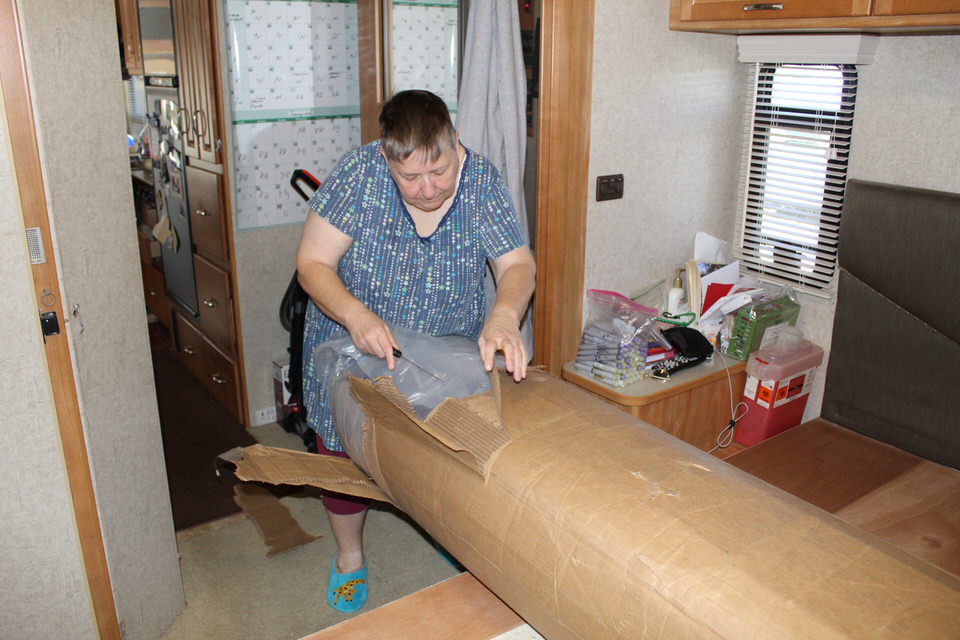 Barbara working on getting it unwrapped.  Doesn’t she look like a woman on a mission?

Our new mattress.  A pocketed coil spring mattress with a cotton quilted cover and border.  Hopefully, this will be the ticket to no more back aches in the morning.

Back to Felicity we go.  Remember last night I said at the end of the blog the most interesting attraction in the town of Felicity is yet to come.

Our good Mayor is a man with a vision.  Maybe one a bit different from you and me, but a vision nonetheless, one that is slowly and steadily becoming a reality.

The Center of the World has become the central point for memories for Jacques-Andre’s latest, longest running and most serious project, The World Commemorative Center at Felicity.

On a series of two-inch-thick granite walls — long, two-sided wedges — Jacques-Andre is having inscribed everything that he thinks is worth telling future generations.

This is a stock, aerial view of the The World Commemorative Center and the two sections that have already been completed.  Eventually, it will continue on past the chapel to the foot of the Chocolate Mountains.

Each granite wall is one hundred feet long and engineered to last for 4,000 years.

Installation of each wall begins with a three foot deep trench.

Next, 5,945 pounds of knitted steel are inserted into the trench and then 1,960 cubic feet of concrete is poured over the steel.

Text is copied but drawings are done free style by hand by a handful of artists capable of such work.

Time now to take a walk out into the field of memories for ourselves.  Take a look again at the aerial view of the The World Commemorative Center.  In the front section, immediately behind the Center of the World Pyramid you will find

One long wall that recounts the history of French aviation. You’ll learn more about the key role of France in the development of manned flight than you would in an aviation museum in France.

It was interesting to note that the top of each panel was in French, the bottom was in English. 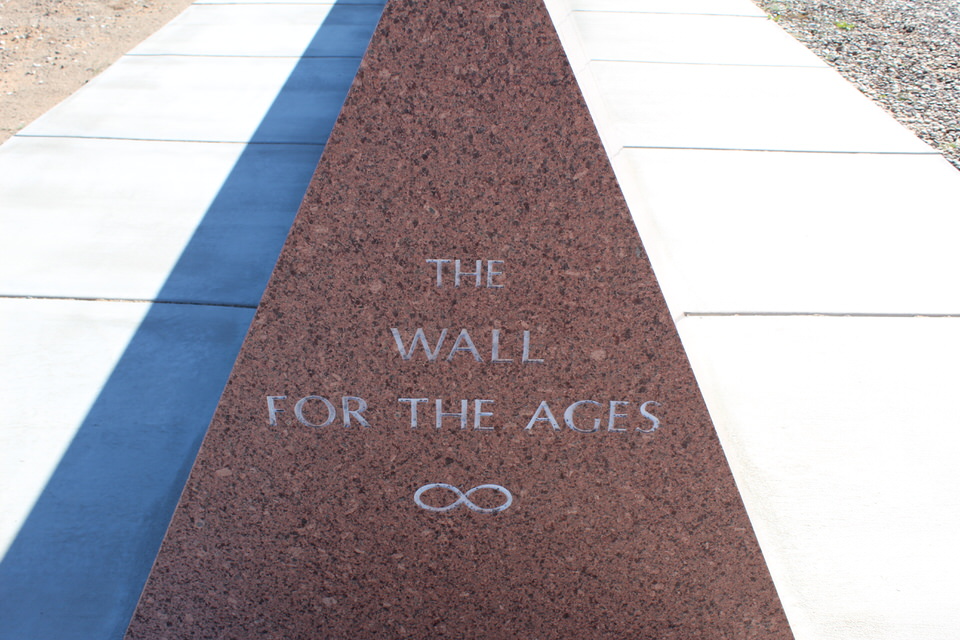 Want to be remembered for all time?  When this 400 foot wall was first built for $300 you could have you name inscribed on it.  Unfortunately, both sides of the wall are now full.  But don’t despair, the good Mayor has come up with yet another way for you to be remembered.  More about this later.

Still in the front section there is a 400 foot wall 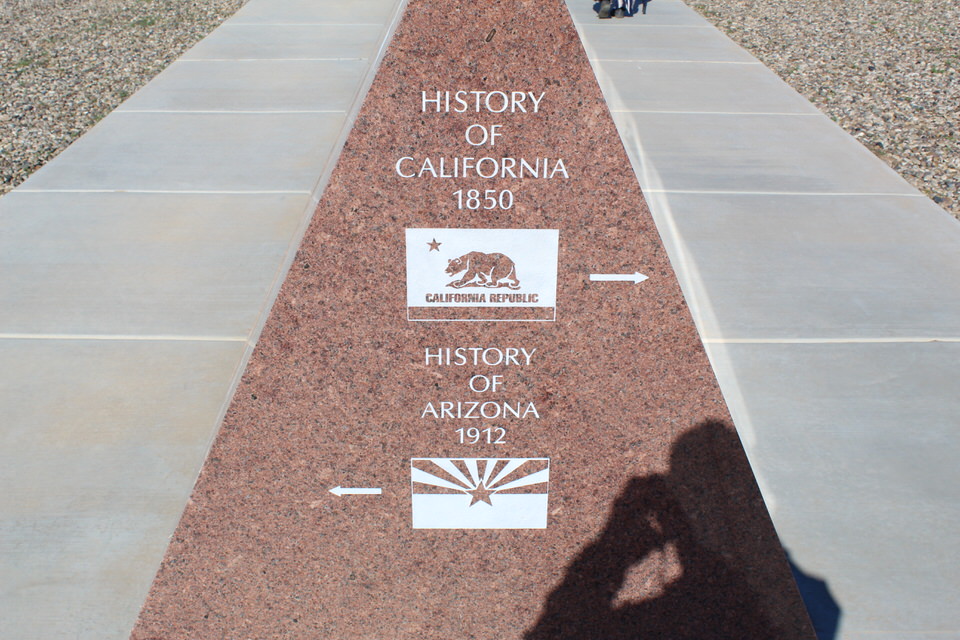 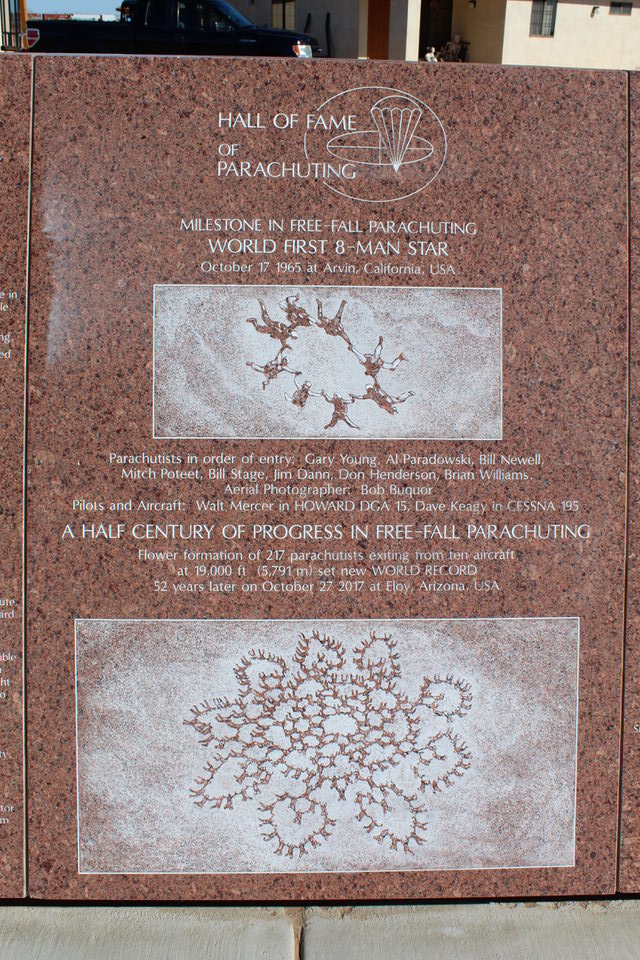 Given the good Mayor’s background in parachuting it is no surprise that there are a series of panels devoted to the sport. 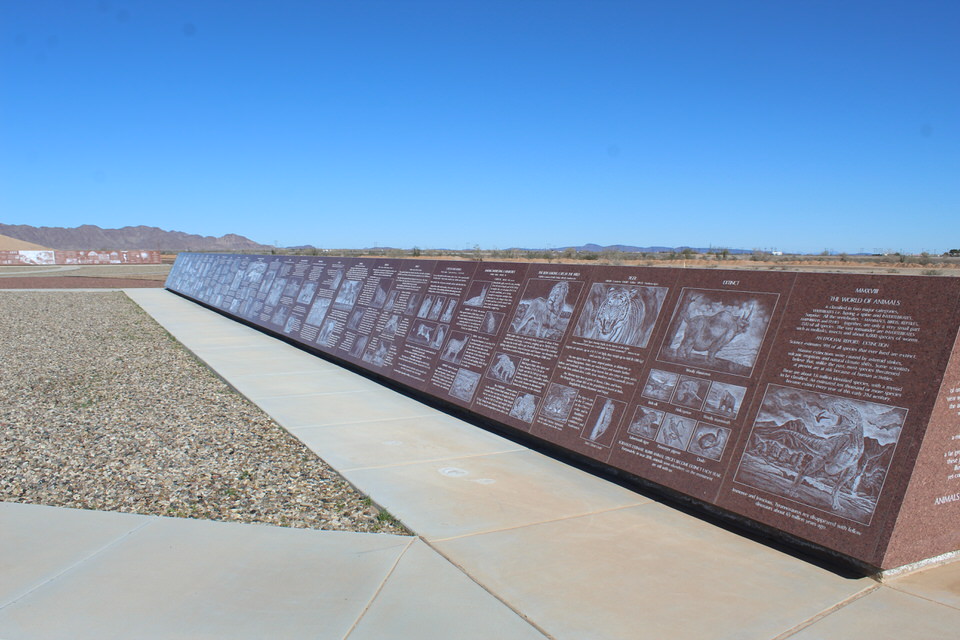 I found these walls regarding Animals Of The World so informative.  For instance, did you know

perish the thought that I forget my good friends.

There are more walls in the front section but let’s move now to the back section that is just in front of the stairs up to the chapel. (refer back to the aerial picture in the beginning). 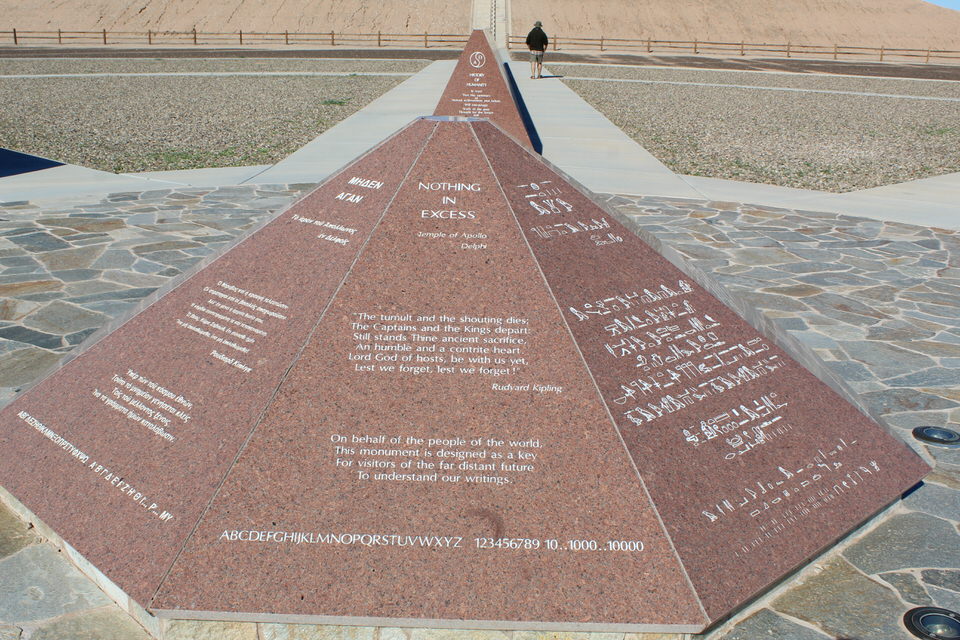 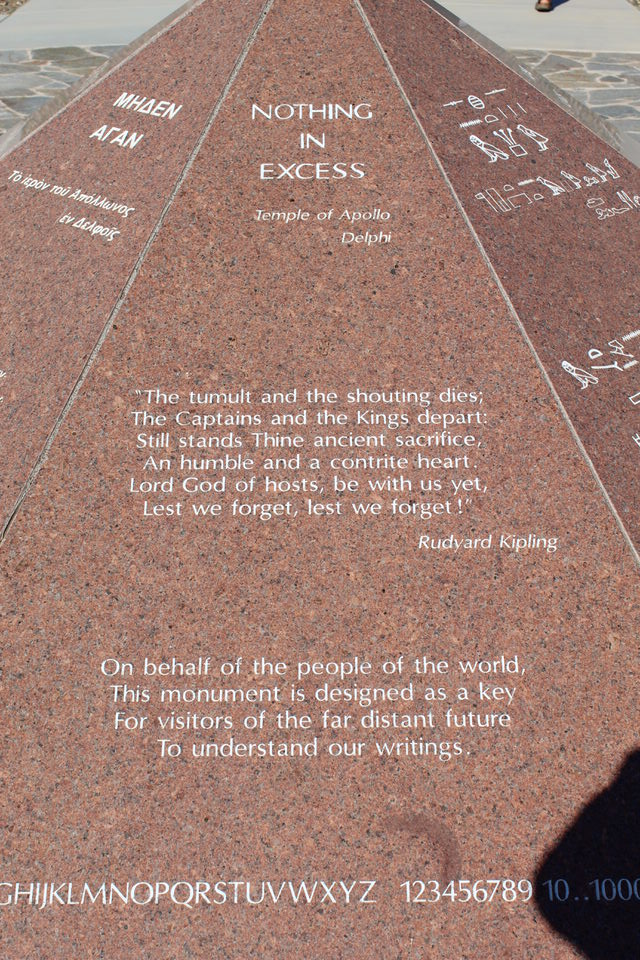 The Felicity Stone is the Rosetta Stone of our day and age.  It is located at the center of the eight granite monuments of the History of Humanity.  It is designed to assist visitors of the distant future in understanding our present languages.  To date the panel in English has been translated into ancient Greek, Latin, Egyptian and Chinese panels. 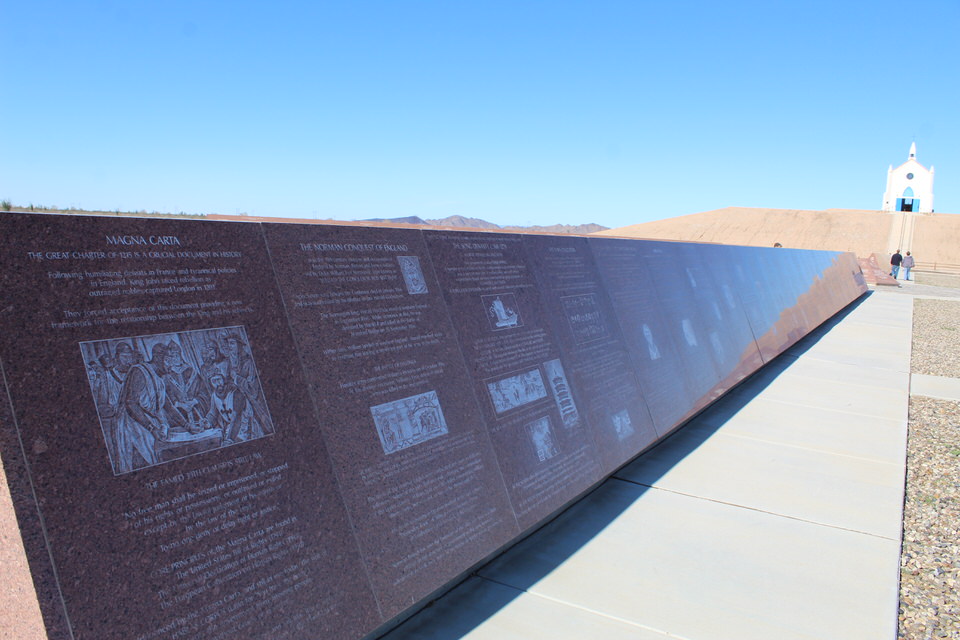 One of the the eight granite monuments dedicated to the History of Humanity.

Michaelangelo’s Dawn of Creation painting in the Sistine Chapel.  It occupies panels 11 through 13 on one of the walls. 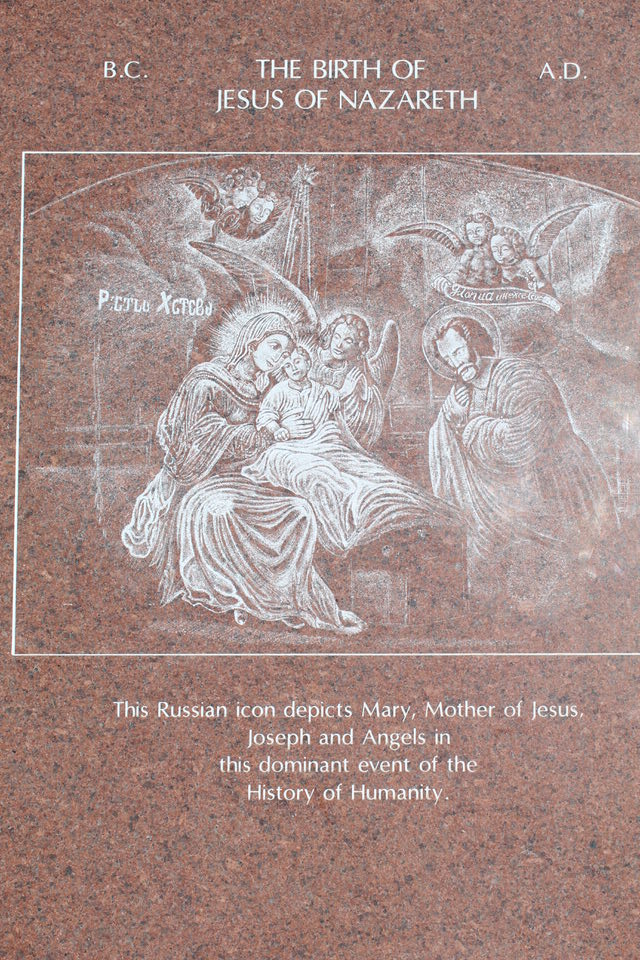 I was delighted to find this one here.

I just had to include this one.

Remember before I said that though the Wall for the Ages is full the Mayor has come up with a solution? 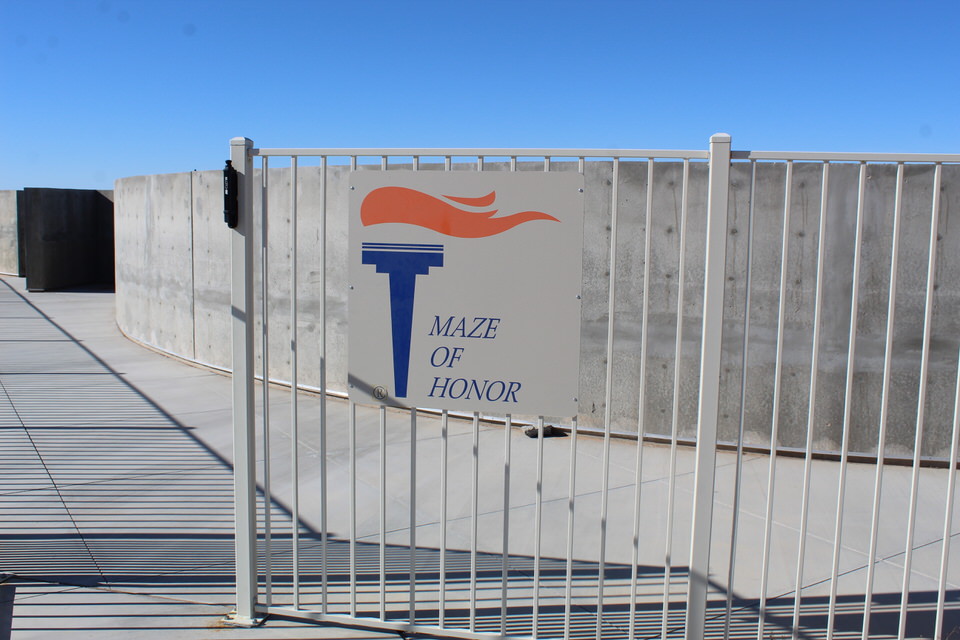 This is a maze that twists and turns for close to a football field in length.  The purpose of this monument:  Your Place in History is captured on granite. Your laser engraved panel is installed on a protected and prestigious permanent monument.

For $100 you can have a loved one remembered, you can dedicate a panel to a parent or grandparent, you can celebrate a birthday or wedding anniversary or birth of a child, or . . . the list is endless.

The World Commemorative Center is incomplete at the moment, but it’s only in Phase One. The Mayor’s hope is that thousands of walls will be built by our successors. Be that as it may I hope I have aroused your curiosity enough that you will put in on your bucket list of places to visit.  You will not regret it.  For a fact it is places like Felicity, people like Jauques-Andre Istel and  The World Commemorative Center that make life and road trips way more interesting.

Our day on The Road of Retirement has come to an end.  Another laid back easy going day.  We played some Mexican Train.  We wrestled our new mattress to the bedroom and set it up.  Later in the day we were able to wash all the sheets and blankets. Oh and

later in the early evening we worked together to make crock pot lasagna.  I was assigned the job of grating the cheese.  It was a small sacrifice to pay for such a delicious meal!

Its getting late and in just a bit it will be time to check out our new mattress.  Happy, Happy, Joy Joy!

Thanks for checking in with us again.  We appreciate your company and your comments.  Catch you tomorrow.