Raindrops Keep Falling On – Our Roof

What’s that I’m hearing on the roof?  Not a bird.  Why, its rain.  Now how about that.  This is the first time it has rained since we have been here.  Not hard.  Just a light drizzle.  It also didn’t last all that long.  Probably an hour, maybe two.  Then that was that.

Today was a day to cross one more item off our bucket list.  We were up and out early, well, early for us.  A quick stop for breakfast and we were on the road.  We were heading toward

the town of Quartzsite.

On the way we passed Castle Dome Rock.  Its that big mass of mountain jutting up in the middle of the picture.  Believe it or not there is a hiking trail that leads to the top of it.  Supposedly, it is a rather easy hike.  But don’t expect me to prove that one way or the other.  I’ll just accept it as fact and leave it at that.

Since Route 95, which is what we are on, starts at the Mexico border I guess it is only natural that a stop along the way would be natural.  But this far north?  Maybe I’m missing something. 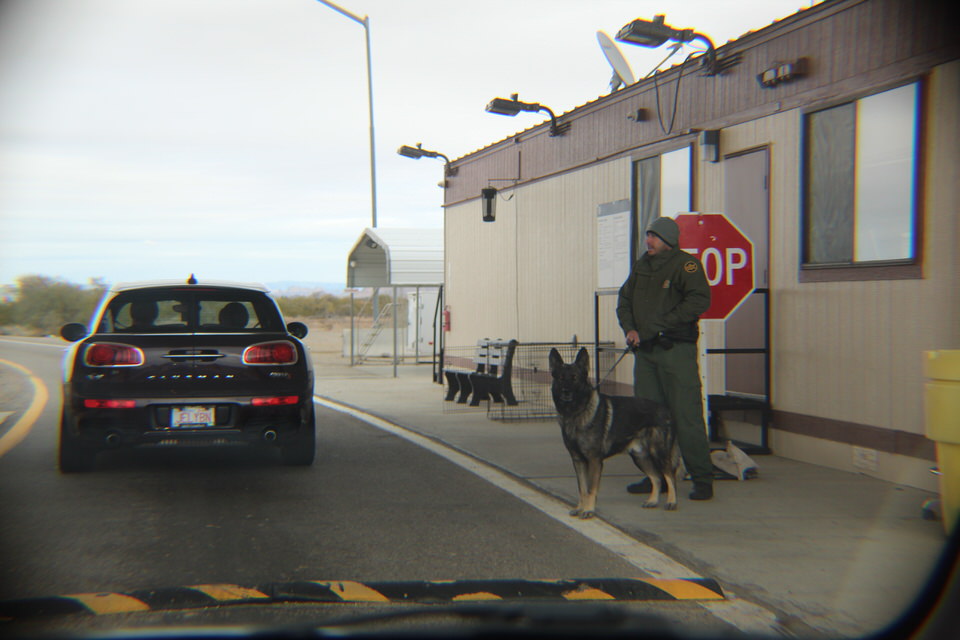 See that nice dog?  I put my window down to say good morning to his handler and that nice dog went nuts.  I was certain that we were going to be pulled over based on the dog’s behavior but we were waved on. 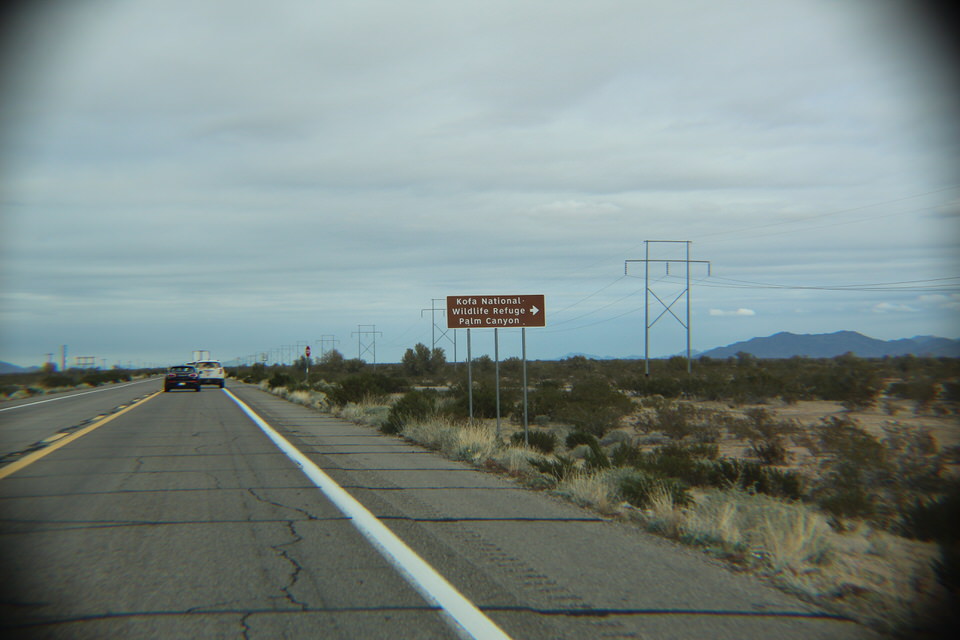 The Kofa National Wildlife Refuge.  Within the refuge there are four dispersed campgrounds that allow you to boondock for up to 14 days:  Palm Canyon, Castle Dome, King Road and Crystal Hill. 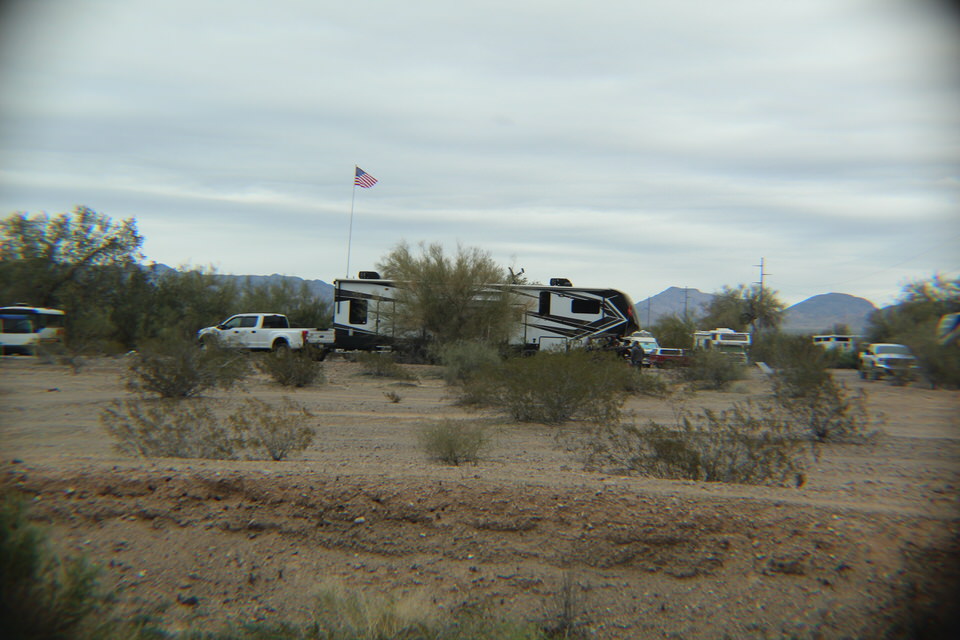 I tried to take some pictures but they don’t really show the breath and depth of the rigs that were scattered across the desert.   There were hundreds of all kinds in every nook and cranny, behind every bush, on every scrap of land big enough to park a rig.  There were rigs that looked like they were ready to be junked right up to and including the big rigs that usually cost upwards of a million dollars.  They were all out there. 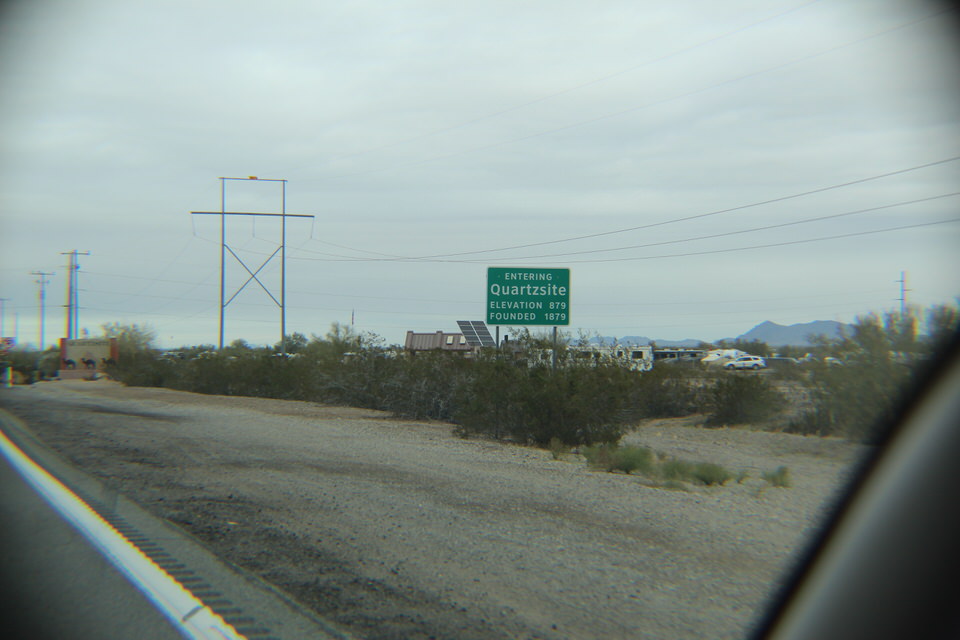 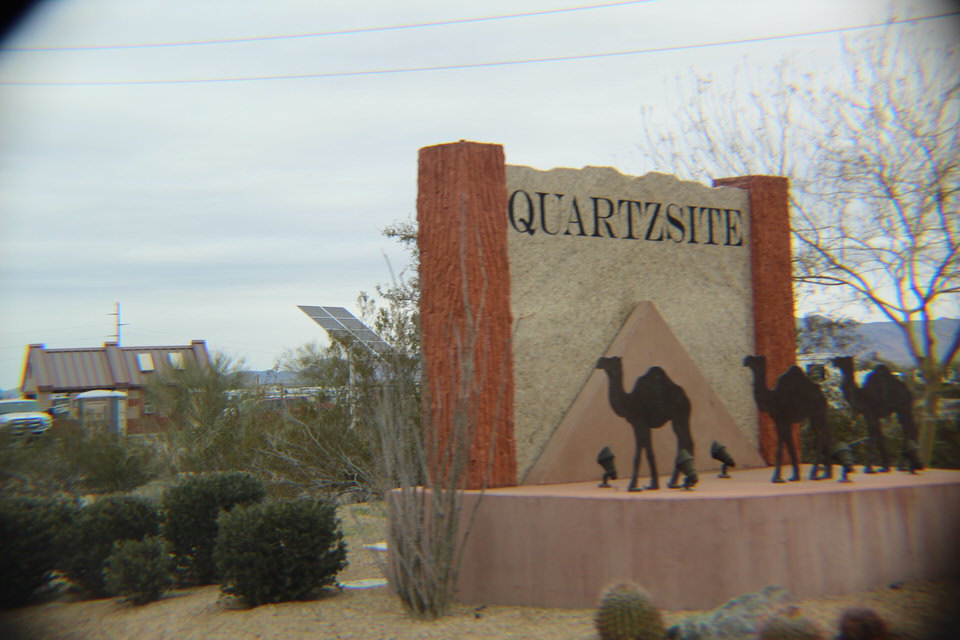 Then we were there.  The Holy Grail for all RV’ers, the meca of the Southwest.

This was why we had come up here.  Every year here in Quartzsite there is a large RV show with all kinds of vendors.

Time to find a parking space.  I’m so glad Barbara was driving.  She went up and down, round and round the parking lot until

she snagged a parking space right at the entrance to the

white tent that held it all.  Google the RV show at Quartzsite and you’ll get an idea of the size of this monster of the midway.  It is probably about four football fields in length. 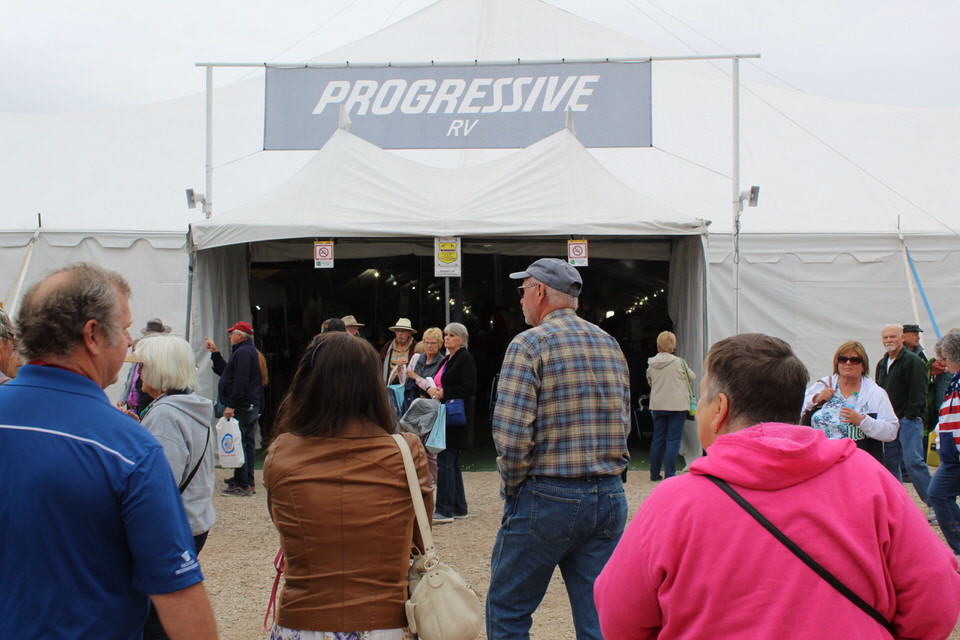 Time to go in.

The promoters of this show stated they were expecting over 150,000 in attendance.  I believe they all showed up today! 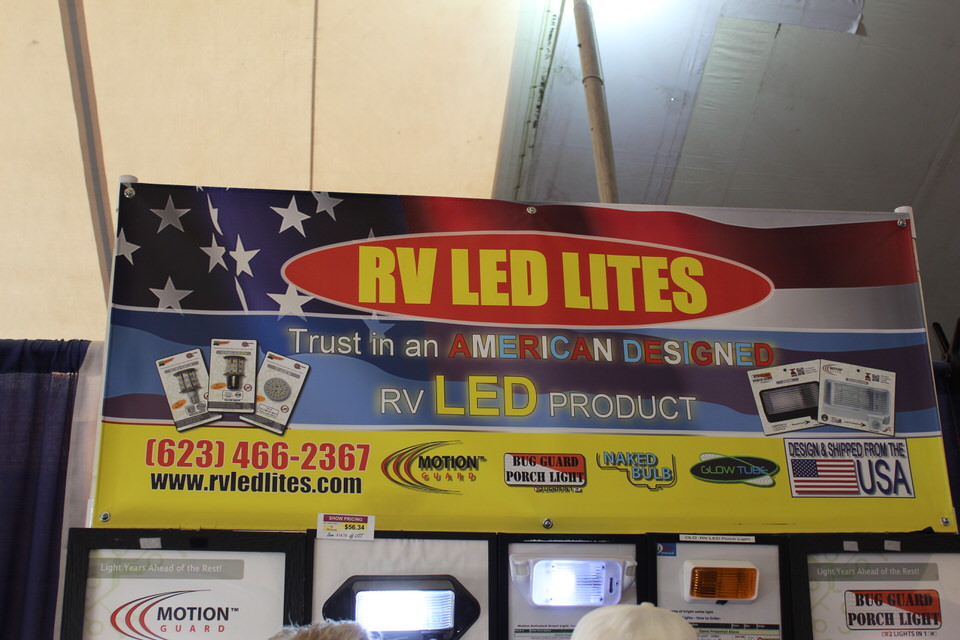 I gathered another lead on LED lights.  Several of the coaches we are looking at have not had the interior lights updated.  If we buy one of these coaches an upgrade will be one of the first things on my list of must do’s.

At this display I discovered the Ready Brake.  It’s a supplemental surge braking system for a toad.  I’ve been traveling without one but after seeing this and checking out the price it is also on my list of must do’s within the next month or two.

This gentleman from Davis Cabinets was extremely helpful and answered a lot of questions both Barbara and myself had regarding new cabinets we will possibly need in the future. 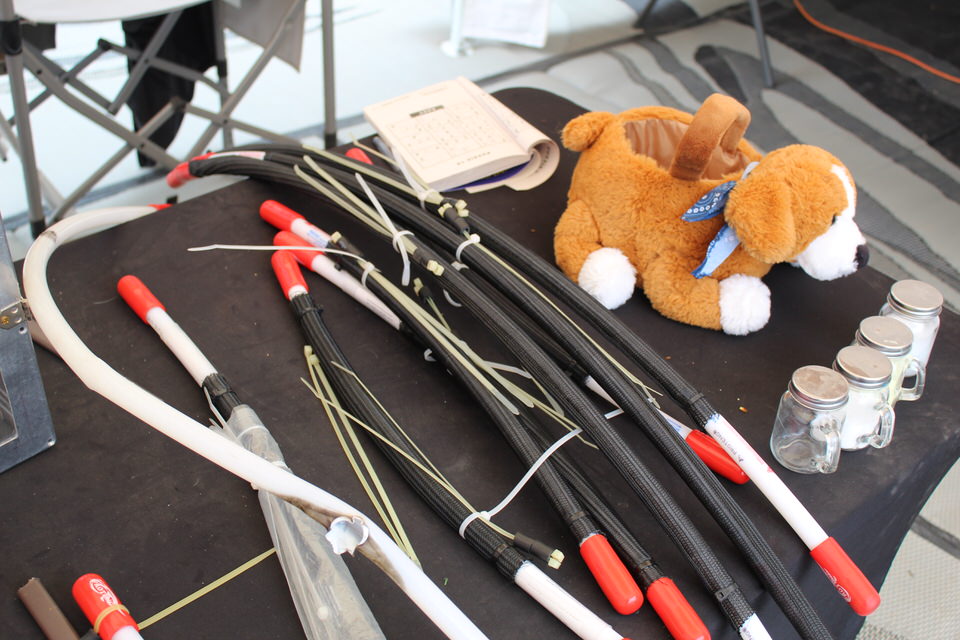 When I go to a diesel pusher this will be one of the first things that I do.  I’m going to have a fire suppression system installed in the engine compartment. 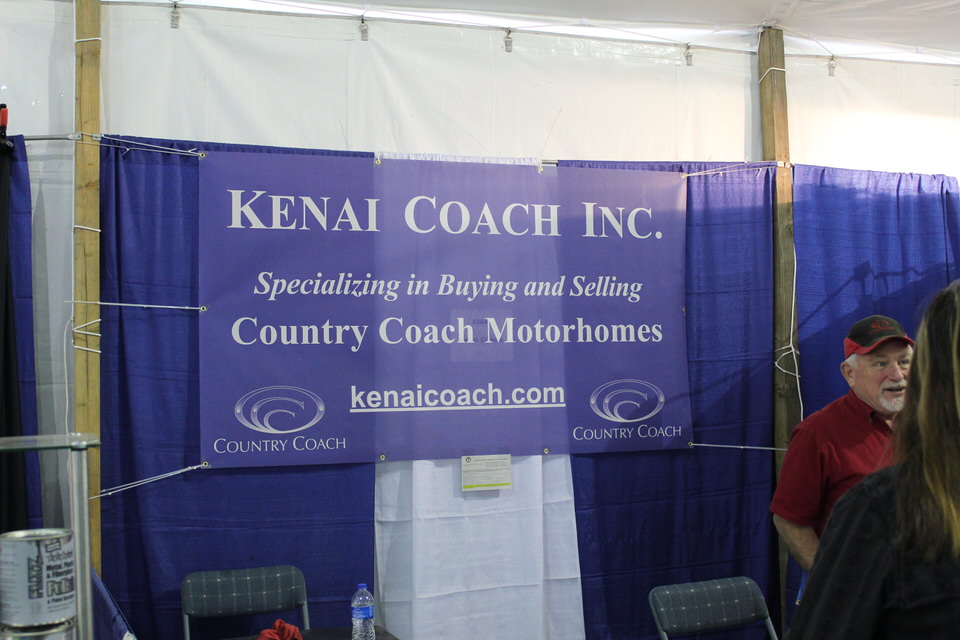 Then I had an in depth conversation with this gentleman who has been in business for years and years.  He sells only Country Coach Motorhomes prior to 2008.  The net of it is he believes anything later than that year is really not worth buying.

Of course there were any number of vendors that had nothing to with RV’ing.

Then just before we were ready to leave Barbara discovered a full set of induction pots that she has been searching for over the course of the last year.  They were reasonably priced so home they came with us. 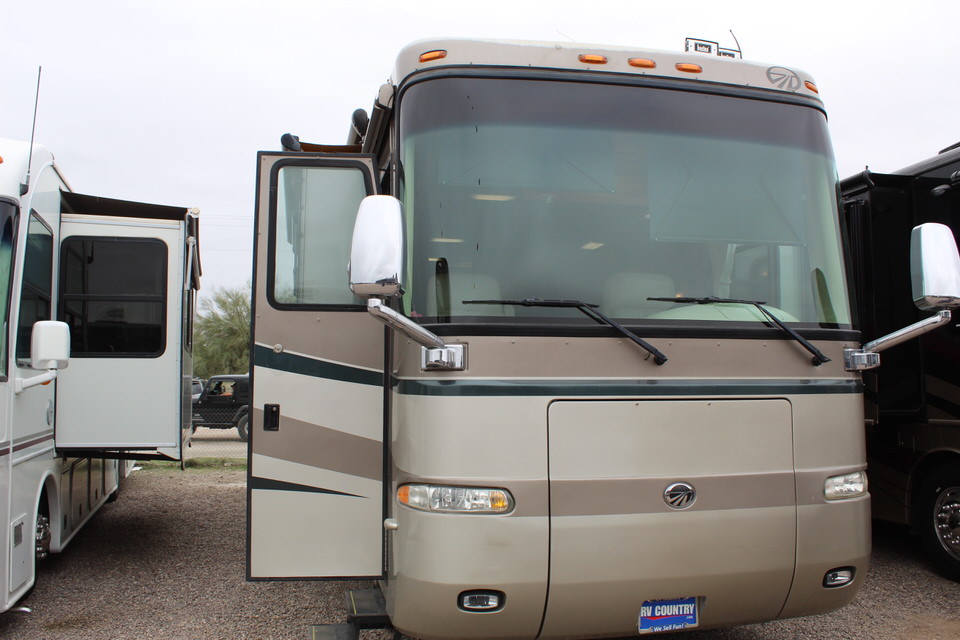 Can you say piece of junk.  We had always wanted to check out a Holiday Rambler.  At first glance this looked promising.  It had a great floor plan.  Then we took a closer look.

Why would a dealer bring a used coach to sell without first detailing it?  Without fixing things that were obviously in need of repair?  Then we asked about the price and I almost fell over laughing.  The price was so far above what they are worth that you have to believe they really don’t want to sell it.  So be it.

We’re back home now and another day on The Road of Retirement has come to a close.  We can now cross another item off our bucket list.  We came, we saw and we see no need to go back.  It was fun, it was informative but unless we have a specific need in the future we’ll shop online.

Thanks for hanging with us today.  We always appreciate your company and your comments.  Catch you tomorrow.