Home Is Where We Park It – Escapees North Ranch, Congress, Arizona

Up On The Roof

We Have A Replacement For Unit #1

It simply boggles my mind.  During the day the temperatures soar into the mid to high 90’s.  Yet by about midnight the temperature has dropped into the low 70’s and by the time I get up at around 5 am they are in the low to mid 60’s.  OK, I know this is common for the Southwest I’m just saying such a swing every day takes some getting used to.

Breakfast this morning was absolutely delicious.  Barbara made up a batch of waffles with sausage on the side.  I had my customary glass of juice and a couple of cups of coffee.  I was ready to face the day.

After breakfast I decided to sit outside for a bit with my book.

While sitting there I noticed that the patio awning was swaying a bit more than normal.  Granted the wind was blowing directly on it but something still didn’t look right.  Time to investigate.  Imagine my surprise when I discovered that the brackets holding the whole system to the side of Elvira were loose.  I dug out my wrenches and went to work.  We should be good for now.  Eventually, this too will be replaced.  But not, hopefully, for a good long time.

Mid morning the call came that I didn’t really expect until at least Monday.

The AC Calvary was on the way to install a new unit.  I mean, they only ordered the unit late yesterday afternoon.  It came in early and they were anxious to get it installed.  As were we.

The new Penguin II.  My question was, how do you get it from there to up on the roof?  After all Bill was here by himself.  When I asked him he just sort of laughed and said It’s really quite easy.

First step, place the unit at the bottom of the ladder leading up to the roof.  What you can’t see yet is the strap fastened to the front or upper part of the AC unit.

Second step, Bill goes up to the roof.  He has the strap with him.  Then, he just pulls the whole unit up the ladder to the roof.  Like going up an elevator.

In less time than it takes to talk about it the new AC unit is on the roof.  Imagine that.

Now the real work begins.  This is also one of the reasons I would not do the install.  When replacing an old unit with a new one you have a decision to make.  You either have to install two new units at once so that both will work with the newer thermostat that Dometic provides with all new units. 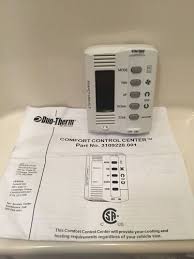 Or, if you install just one new unit and leave an old unit in place you have to install a power module conversion board on the new unit.  This is necessary so that the new unit will talk to the old style 5 Button Comfort Control Thermostat and the older AC unit.

Since I was leaving the older unit in place at this point in time the power module conversion board had to be installed in the new unit.  Now, you know if the tech who has been doing this time after time still has to read the instructions it is not as simple as one – two – three.

The power module conversion board was finally installed in the new unit and now it was time to put the new unit it its proper place.  Out with the old unit.

In with the new unit.

Once the new unit was in place it was time to calibrate the 5 Button Comfort Control Thermostat.  Bill had to make several trips back up to the roof to configure several different dip switches before all was in order.  The end result?  We are really cool and comfortable.

All finished and everything working it was time to bid goodbye to Unit #1.  It had provided a good 15 years of faithful service before it called it quits.  Goodbye my friend.

While up on the roof I snapped a couple of pictures of the magnificent mountains that are all around us.  You can also see that the park is virtually empty.  Take me with you, anywhere, somewhere, I just want to roll on down the road.  If only I had somewhere to go.  I’m working on it.

That was our day on The Road of Retirement.  Our renovation kitty is bit lighter as of now but installing the new AC was a no brainer.  Especially knowing that we will be in Texas during the hot summer months of July and August.  So what’s next on the list of upgrades and/or improvements?  Hopefully nothing major for the rest of the year.  But then again we do live in a Living Vehicle that requires constant maintenance and attention.  Time will tell.

On the lighter side.

So we’ve made it through another day together.  Thanks for coming along.  Keep safe.  Wear your mask.  Wash your hands.  Spare a life.  Catch you tomorrow.