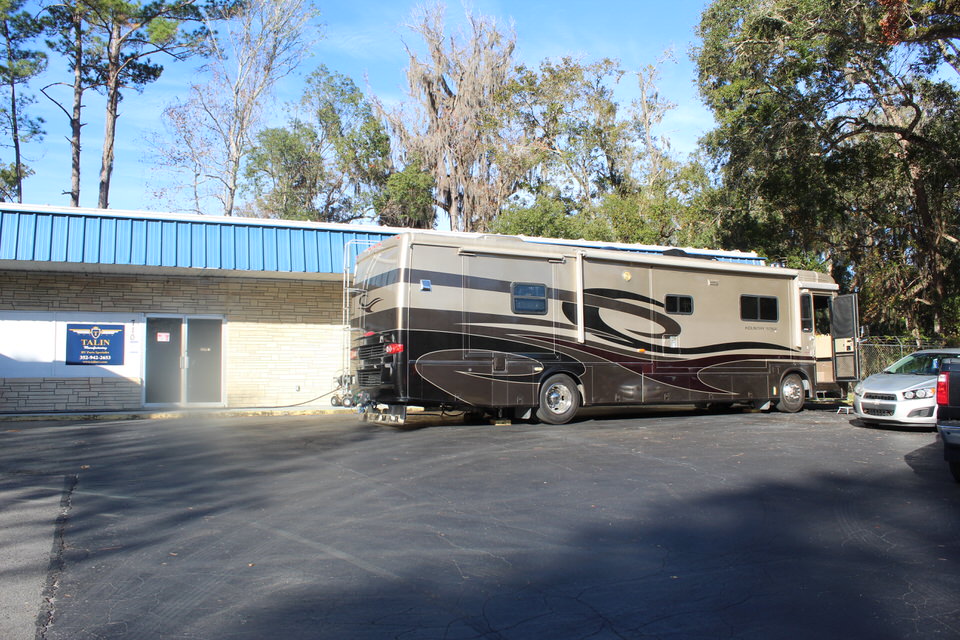 Home Is Where We Park It:  Talin RV

Making Lemonade Out of Lemons

Today was the day.  The culmination of three months of waiting.  Back in October we had ordered a new patio awning from Carefree, and put in an order for new window/door awnings and slide toppers.  After much research we decided to work with Stone Voss for the new fabric and Talin for the install of the patio awning and everything else. They’re sister companies located in Brooksville, Florida which is just 30 minutes south of our winter home.

Well, just after we placed the order we were informed, first, that due to COVID-19 everything from Carefree was on back order – no surprise.  But then the second shoe dropped and we were informed that they closed completely and would not open until the end of November.  So, we decided to postpone the install of everything until the patio awning came in.  It finally came in the third week of December.  We were put on the schedule for the first week in the new year.

Today was the day to make the trip to Talin and have everything installed.  So we were up early this morning in order to get there no later than 9 am.  By 8 am we were disconnected from the mother ship and on our way. 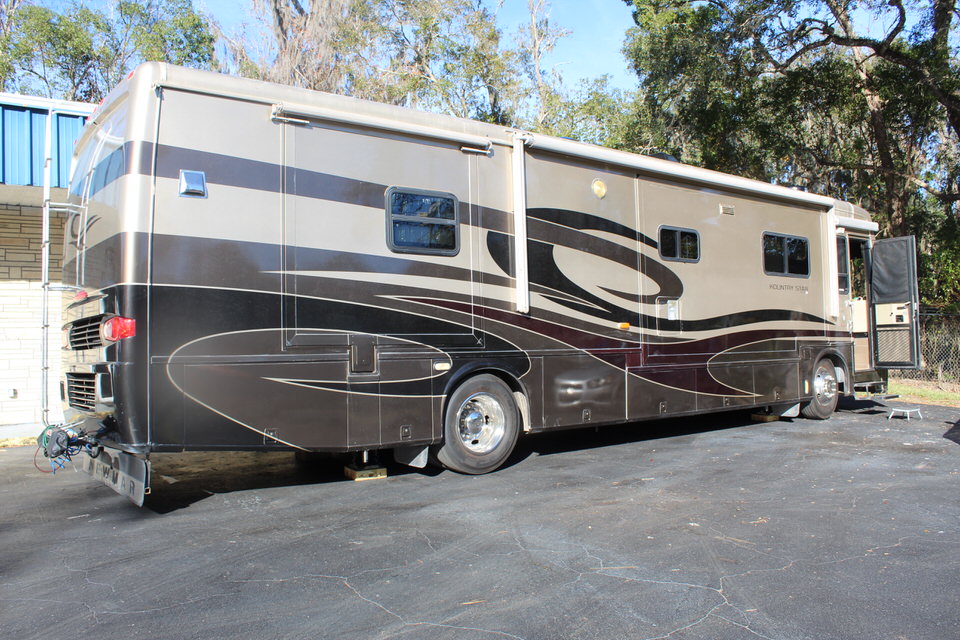 It was an easy trip with no traffic.  Right on schedule we pulled into their parking lot.  They can work on two coaches at a time.  There is a 45 foot class A to our rear.  Both of the coaches are parallel to the office and we both have electric but no waterr nor sewer.  Unforunately, we drew the short straw and only have 30 amp.  We’ll make due.

Well, I was definitely excited and looking forward to all the new toppers and awnings, especially the new patio awning.  Our tech came out to scope things out and that’s when it all went south. 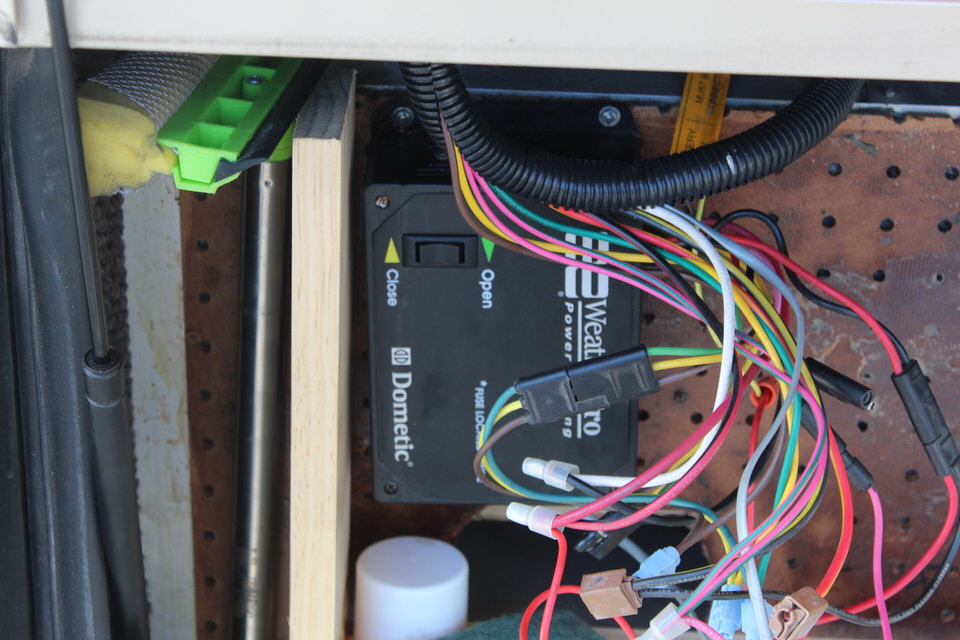 This little box became the source of a major problem.  The bottom line being that there was no way to install a Carefee awning in place of our existing A&E awning.   This little box is wired in such a way that the only way to be able to replace one with the other would have required major rewiring.  Of course with the major cost associated with it.  Talk about a ballon that had just lost all its air.  I was in a funk.

But wait.  They said give us some time and lets see what we can do.  In due time they came back and admitted that the mistake was their’s and the issue should have been caught when the order was put in.  OK, I felt a little better but what were we going to do.  They gave us two options:

a.  no matter the cost, most of which they would absorb, go ahead and try to rewire our rig.  However, there was no guarantee that they would be able to do this in a timely fashion

b.  use the existing A&E mechanism and just replace the awning fabric.  Our tech who has been doing this for over 15 years stated that the mechanism we had was actually stronger than that on the new Carefree.  He also said that parts can still easily be obtained for it, namely the electric motor.  Finally,  he stated that should I ever have to manually retract the A&E awning it was far easier to do than the Carefee.  Than the owner jumped in and let us know that everything forward would be done at their cost even if it meant they lost money.

Yup, we went with option b.  And so even though it appeard we had been dealt a barrel of lemons in the end we came out with a beautiful pitcher of lemonade. 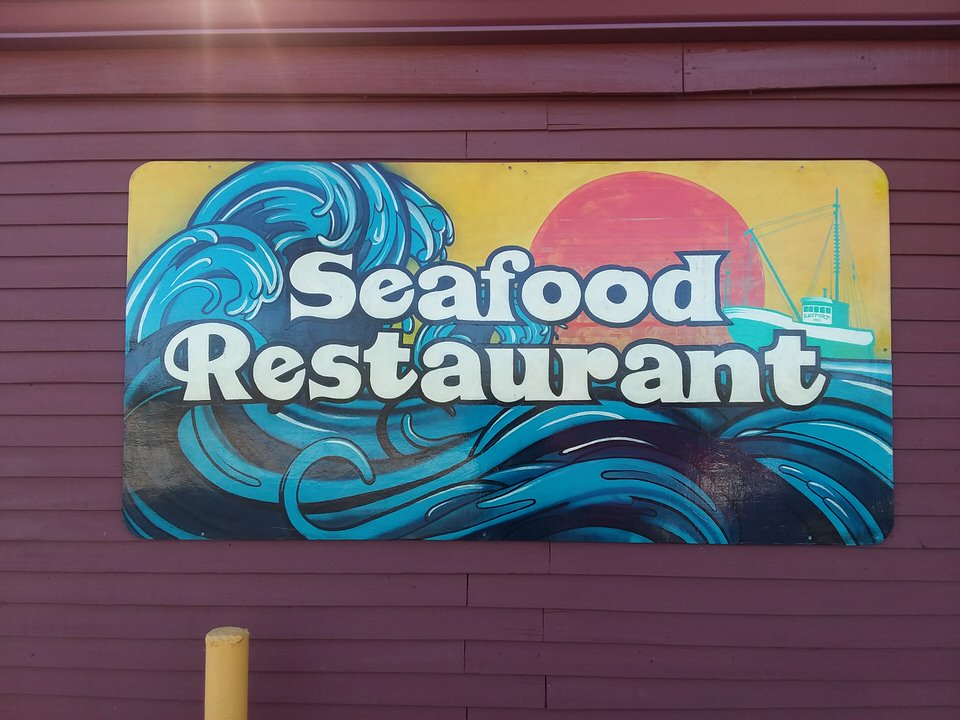 And what better way to do that than with a delicious seafood supper (our supper is a mid-day meal).  This restaurant was recommended by the employees at Talin.

I had a broiled seafood platter consisting of scallops, shrimp and a fish fillet.  It was oh so good and not that expensive.  I definitely became a member again of the clean plate club.  Ms Barbara had what she had been wanting for a long time, a big, juicy cheeseburger with all the fixins.  She too joined the clean plate club.

Some pictures from inside the restaurant.

Time to head back to Talin. 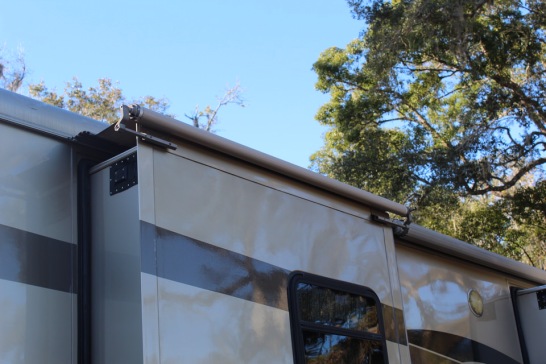 The back slide toppers had already been installed.  I’ll try to get a better picture of the last one before it is installed so you can see the color.

They then turned their attention to the window awning.

They haven’t finished installing this one yet I just wanted to try and take a shot that would show the color.  This awning as well as the door and patio awning are brown tweed with black trim.  We both agreed we really like the color we had picked.  Much more to do tomorrow.

That was our day on The Road of Retirement.  It started on a high, took a big dip, then we rebounded and came out on top of the mountain.  Oh yes, we are two of the most blessed and fortunate people on the face of the earth.

Thanks for checking in with us today.  We always appreciate your company, your comments, and your suggestions. Keep safe, keep healthy, live to the fullest the days that God gives you.