Tonight we’re going to Hope Cemetery.  Now I know what you are probably thinking going where?  Why?  Stick with me.

Hope Cemetery in Barre, Vermont is like no cemetery we have every visited.  Located on a small hillside just outside of Barre, Vermont, the Granite Capital of the World, the Hope Cemetery stands as a magnificent tribute to the stone cutters and artisans peacefully interred among their very own creations.

Hope Cemetery was established in 1895. Originally, it contained 53 acres. Since then, it has expanded to a total of 65 acres. Edward P. Adams, a nationally known landscape architect, created the original plan for the cemetery. There are over 10,000 monuments made of Barre Gray granite.

As we entered the front gate we passed by two granite 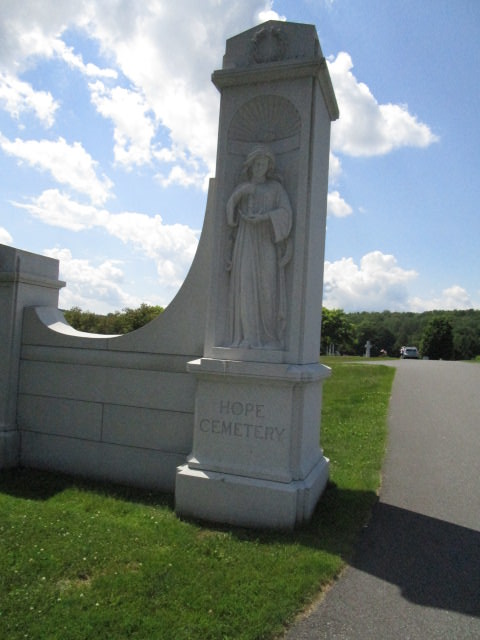 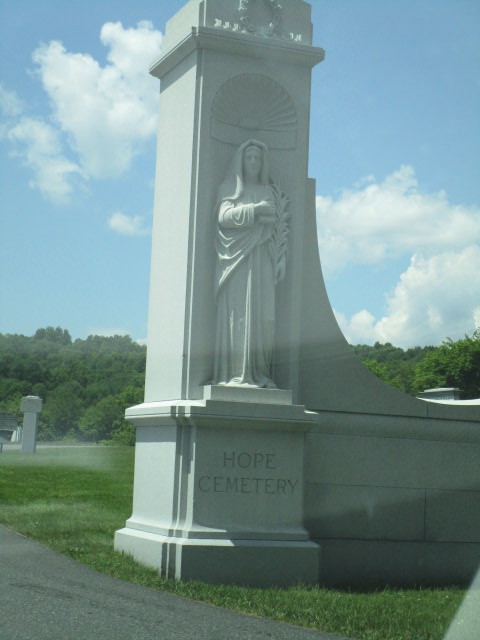 sentries, forever watchful over their abode. From the moment we arrived it was obvious to us that this is no typical resting place for loved ones gone by.  It is truly a gallery of splendid artwork, in the most unusual of settings. Within the cemetery are really awesome works of art.  Each a credit and monument to the artistry of the people who created them, as much a memorial to the people who buried within or under them.

So, let’s begin our tour.   We begin with the Biplane.   Both Leo and his wife, Caroline, were civil air patrol pilots; the headstone, which took three months to create, was carved by Leo’s brother-in-law, noted Barre granite artist Giuliano Cecchinelli.  The bi-plane has broken through the clouds. The American flag rests in a stand available only for veterans of the US military. 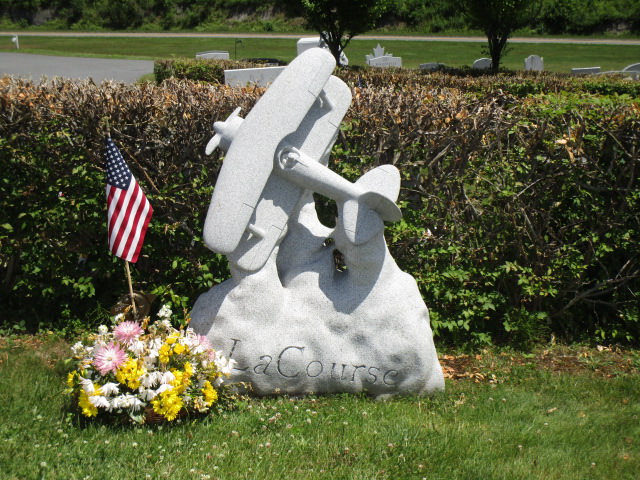 Next is Joey Laquerre Jr.’s No. 61 racecar.   (the 1:4 scale-model monument even has a carved axle underneath.)  The young man was an enthusiast of fast cars.. He died at 28 years of age. 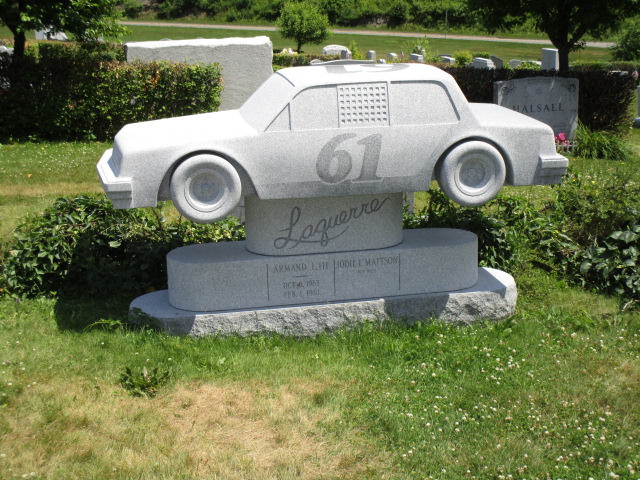 Here is the elegant and creative monument for the Bernasconi family: Two rectangular pillars are connected by eight chain links in an arch, each link carved with a name of a child. We learned that it was no easy task to carve those links from a single piece of granite — a perilous process, since a mistake or crack would ruin the whole chain. We also learned of the chain’s lovely symbolism: two close families and their children are linked together forever by marriage. 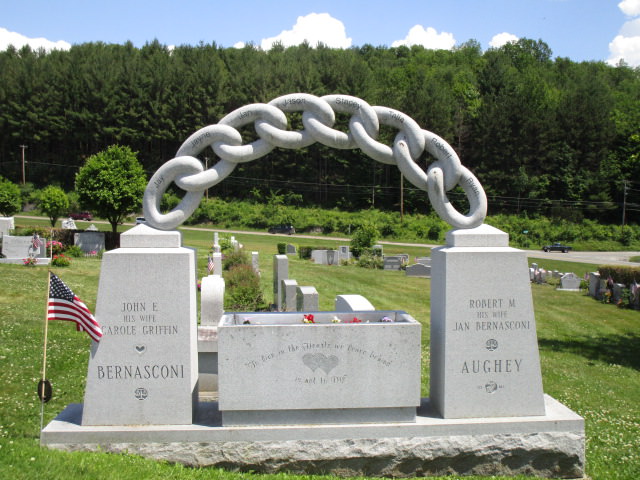 Continuing, here is one of the cemetery’s most engaging figures done by the gifted Italian sculptor Louis Brusa.  It is that of a youthful, sitting angel whose head, adorned with curly, flowing hair, rests on an open palm; her elbow perches on casually crossed legs. Is she pondering life and death? Is there a hint of a smile? Was she a wife, a mistress, a friend? Her face is beguiling, and her eyes seem to return the gaze of a captivated visitor. 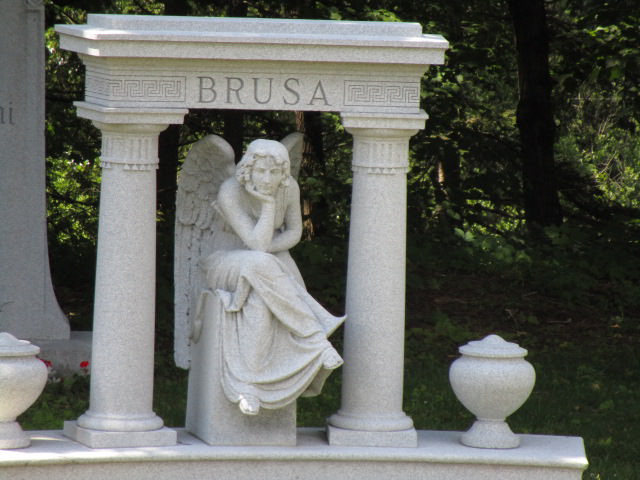 Then there’s the tragic story of gifted Italian sculptor Louis Brusa and the controversy his monument incited. Brusa fought to force the granite sheds to install dust exhaust systems, even as he was dying of silicosis. The Vermont Legislature passed a law mandating the safety measure in 1937 — too late to help Brusa, who expired the same year. The monument, which he partially carved himself to honor victims of silicosis, caused its own tension in Barre. It depicts a dying Brusa in the arms of an unnamed 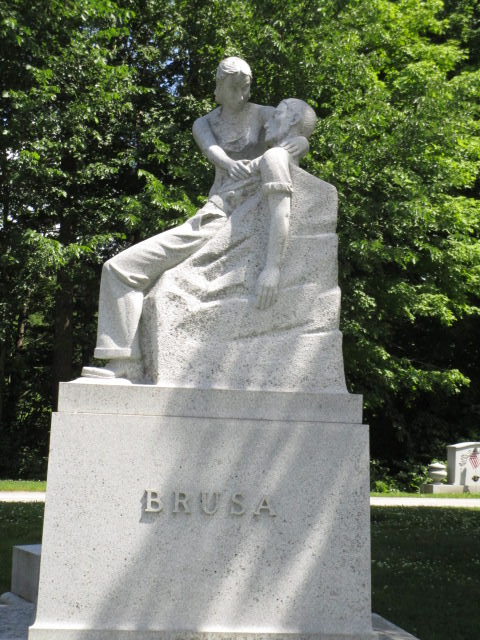 standing woman, whose shapely backside was apparently too much for some prim and proper Vermonters! A prominent doctor had his own (future) gravesite moved so he wouldn’t have to stare at the blatantly pornographic statue for eternity.  Observing the figure’s slender granite form with 21st-century eyes, however, you can only marvel at how times have changed.

We move on now to the grave of Elia Corti.  This gentleman died after a political meeting got out of hand and he was fatally shot in the stomach.  The marker for Elia Corti was crafted from a single block of granite by the brother of the deceased. The outstanding hand carved life-size figure sits quietly contemplative for an eternity to come. The detail of the clothing almost bring this figure to life. 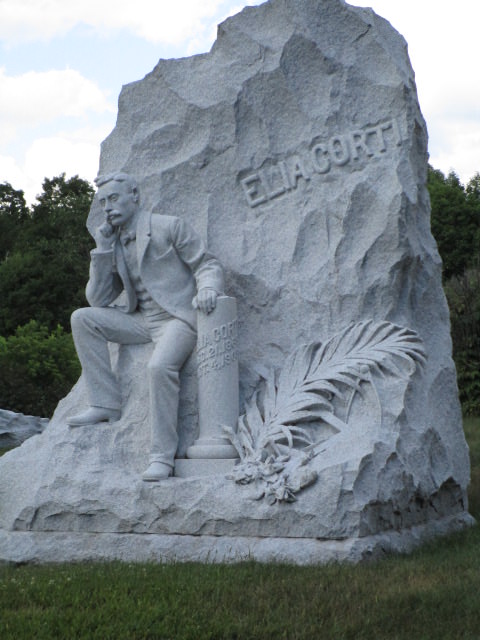 Next is the Soccer monument .  The Davis grave contains the body of a young man believed to be a soccer enthusiast. The monument includes the names of his parents. 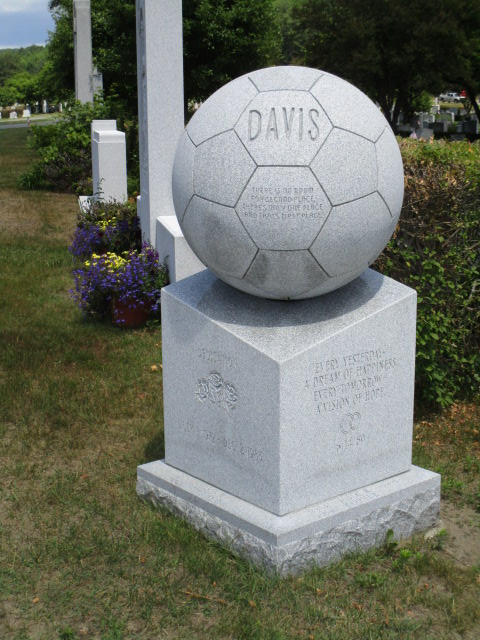 One of several remarkably eerie but emotionally touching tombs we found was shaped like a bed.  William and Gwendolyn Halvosa are shown sitting up in pajamas, holding hands, their tombs stretched out before them. No doubt, preparing for what will be a very long night of sleep.

We also have the Virgin Mary holding the dead body of Christ after his crucifixion, death, and removal from the cross, but before he was placed in the tomb.  This is a replica of Michangelo’s Pieta. 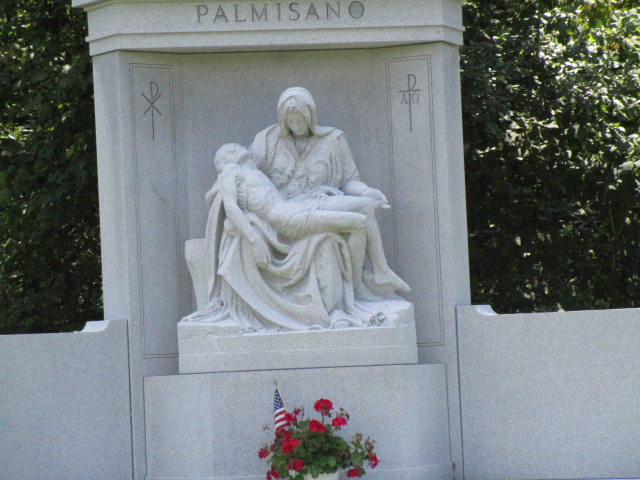 This next was rather unusual to say the least.  It is the graves of T. Paul Martel and Janet M. Martel.  Not only unusual in its style, but by the fact that there are inscriptions on each side of the cube. 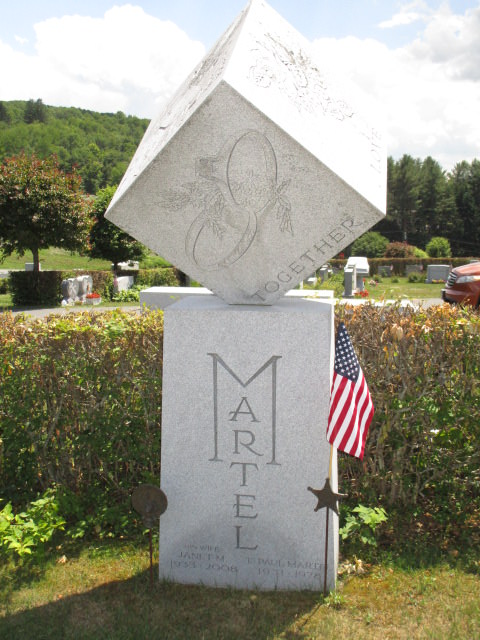 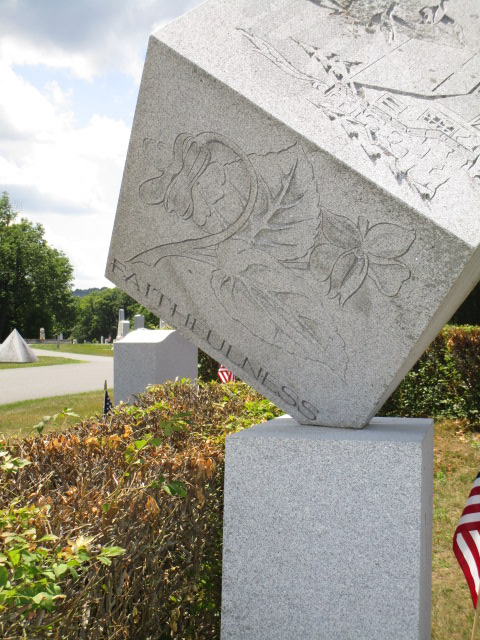 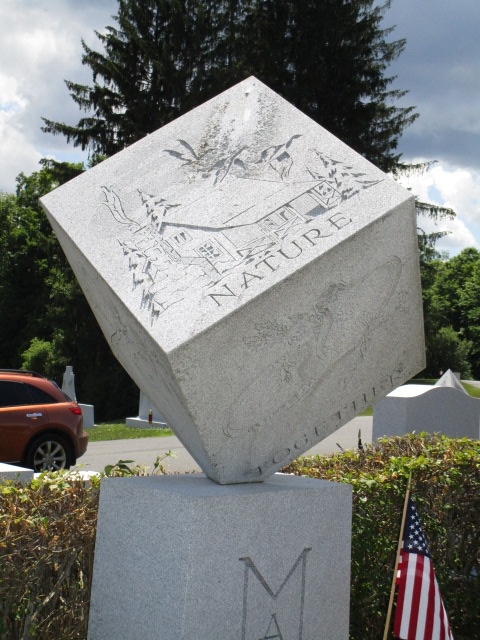 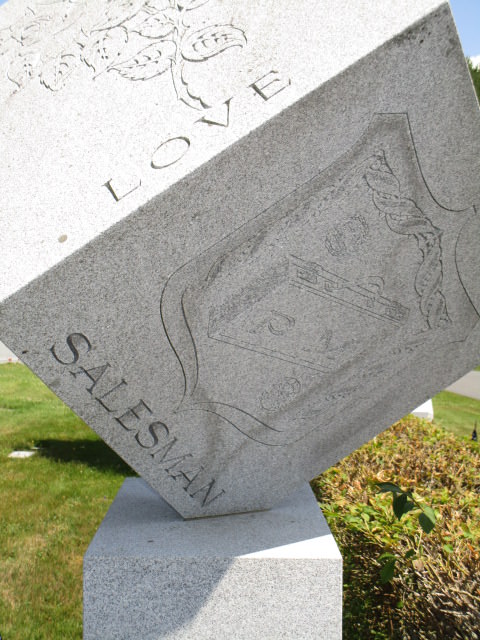 We have Giuseppe Donati’s stone, a raised relief depiction of a soldier smoking a cigarette, while the face of his wife or person close to him floats in a wisp of smoke. 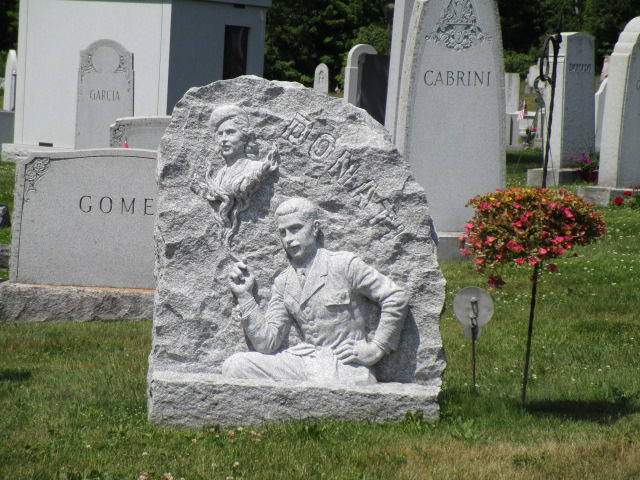 There we have the graves of Daniel Morrell Vrooman and Jane Elinor Vrooman in which they caution one and all about the risks of ignoring the spiritual nature of humanity.  These markers are engraved on all sides with messages from the Vroomans and passages from the Bible. 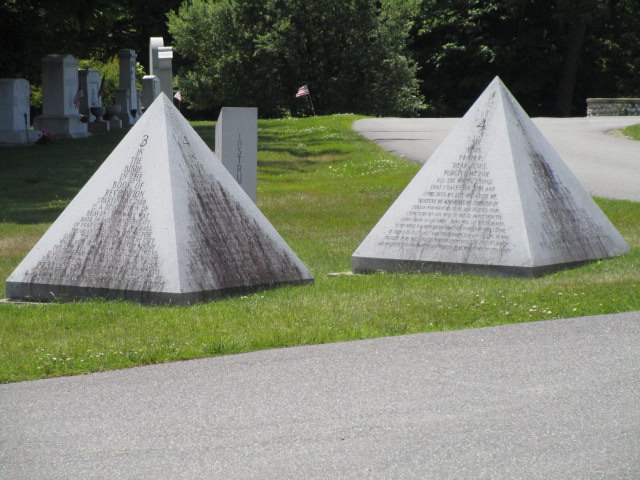 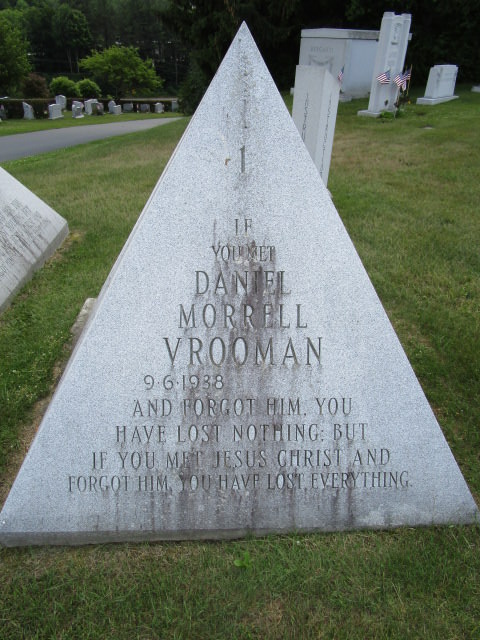 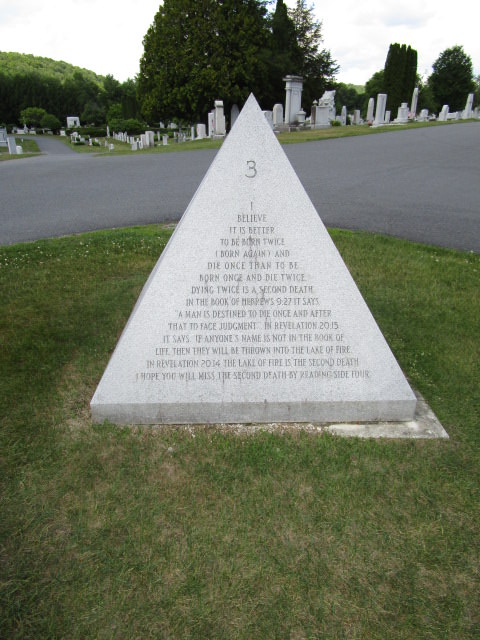 Then there are several others for which I could find no information but which I found absolutely fascinating.   Take this one depicting a large bass fiddle. 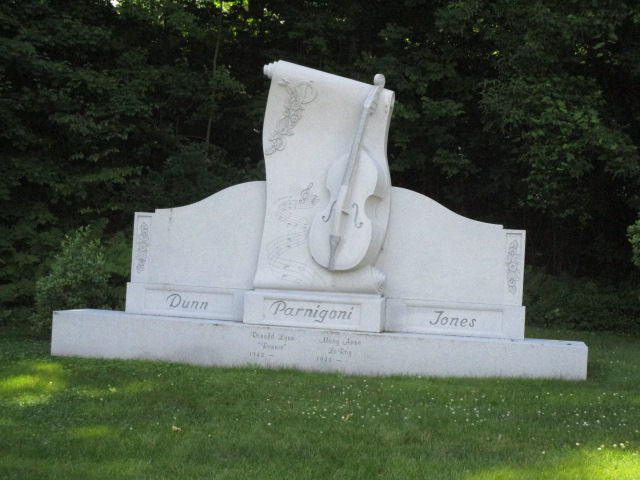 Man on a motorcycle while his wife/mother watches him go 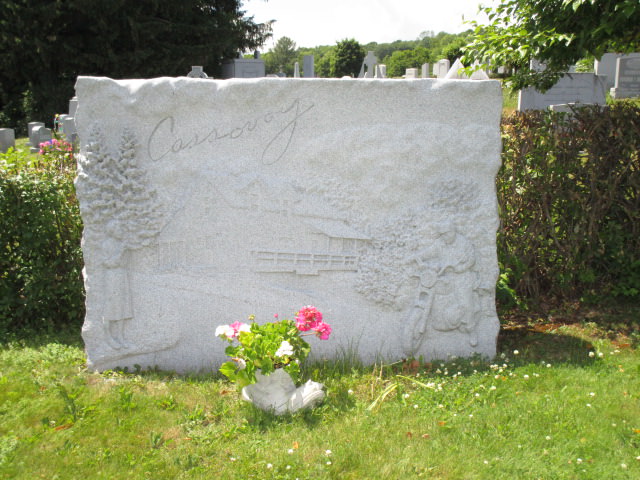 This one of Jesus praying 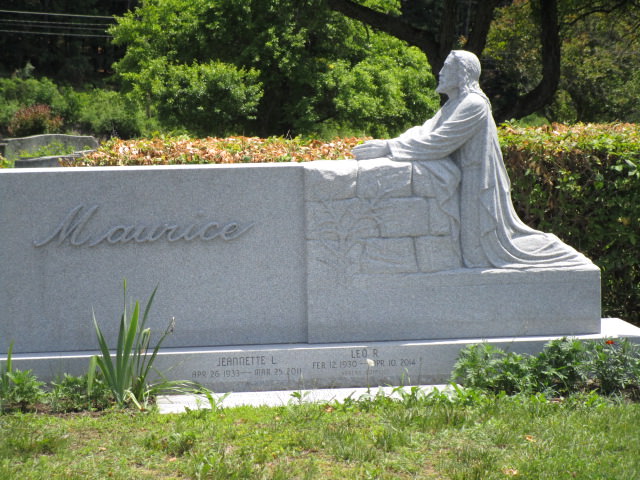 Finally the grave of a child. 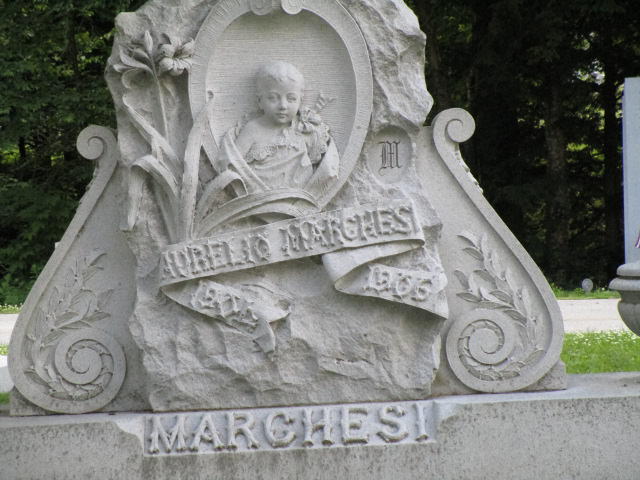 I believe you will agree with me by now that this is no ordinary cemetery.  What an unusual place to find such beautiful and fascinating works of art.  We are so glad that Dr. Pam, the chiropractor, had told us about this cemetery.  Tomorrow, we’ll bring you the place where most of these works of art were sculptured which is the Rock of Ages.  Using stone from their own quarries, their in-house artisans are the ones behind these awe-inspiring handcrafted monuments.

Till then, day is gone and night is once more upon us.  We had an absolutely fascinating day of discovery.  As always, made better by the fact that we did it together, traveling along, singing our song, side by side.  We thank you for taking the time to come along with us.  We also hope that your day was a truly great one as well.  Now, in closing, a thought for each of us to ponder: