Before I get into our day, this being Veterans Day let’s take a moment to remember all those who have and are serving our country in our Armed Forces.  Let’s remember those who have given their all and the loved ones and families they left behind.  Let’s remember the families of all who are separated from those they love as their loved ones serve in places around the world.  And let us never forget freedom is never free.

This was a Sunday we had been looking forward to for many months.  This morning we would be worshiping in what we now fondly call our Home Church, The First Presbyterian Church of Inverness.  Steve is the worship leader at the contemporary 9:30 am service and it was so refreshing to him sing and play the piano.  I haven’t met many

who are his equal.  As soon as he begins you just feel your spirit and your heart begin to soar.  Pastor Ron, the pastor truly knows how to deliver a thoughtful and inspiring message.  I always look forward to what he has to say.  Today was no different.  This was stewardship Sunday and his message had nothing really to do with how much one should give, not even if one should make a pledge to the church.  His message rather was about our gratitude to God and finding ways to express it in meaningful and tangible ways.  All in all it was a really fantastic way to start our morning.

Next stop after church was one of our favorite places for breakfast.  It’s name is simple enough, The Diner.  The food is always delicious and ample.  Most often we end up 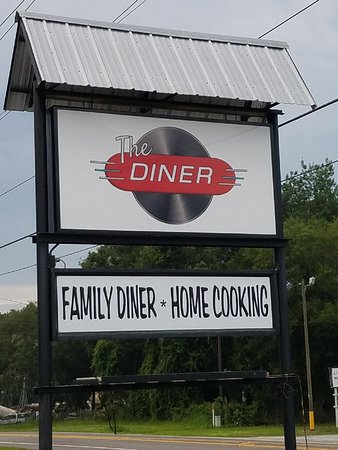 bringing part of it home in a box.  This morning was no different.  We both had breakfast burritos and while I did finish mine this time, Barbara brought half of her’s home.  Add in a few cups of coffee each and we were good to go.

Home again and it was time to do what I had been putting off for too long.  It was time to install the last awning over the bedroom window.  My neighbor Sherwood had just the ladder I needed, an eight foot step ladder and he was kind enough to let me borrow it.  With Barbara’s help the awning was up and in place.  Oops, forgot to take a picture.  Well, it looks just like the other two.

That finished it was time to settle in and watch some football.  Gertrude (Barbara named the antenna not me!) has locked on to her satellite and has not let go so we have TV channels aplenty.  I have to admit it is really nice to watch what you want when you want.  Only one disappointment, Velocity  which is a car nuts channel that I love to watch, but would you believe a lot of the shows now airing are repeats that I already saw over two years ago!  Go figure.

Our day was far from over though.  We had tickets for an evening concert in The Villages at The New Covenant United Methodist Church and so late afternoon we were off to the church.  Walking in one of the first things that caught my eye was this beautiful stained

glass window.  The next item that I noticed was this mural at the entrance to the hall.

And this was the concert we had tickets for.

And this was the program for the evening. 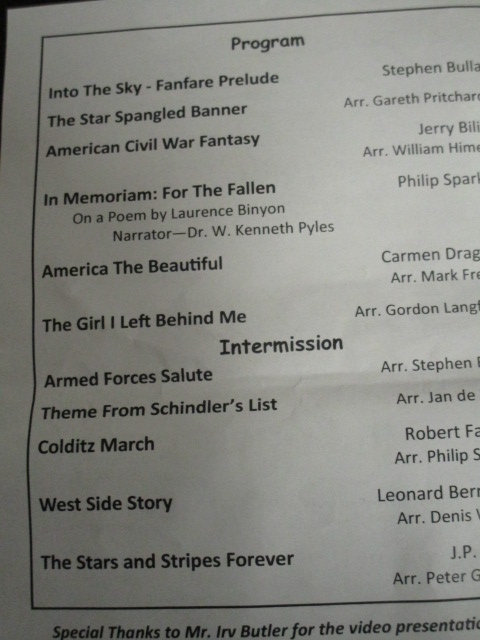 I absolutely love a brass band and this one did not disappoint.  The music was a little bit of everything.  Three pieces in particular really spoke to me and they were, The Star Spangled Banner, Armed Forces Salute, and The Stars and Stripes Forever.  I wish I could have included an audio clip but since I can’t take it from me the music literally made your heart soar.  It was powerful and thrilling and first class all the way.  I would love to hear this band in concert again.

Now back home we settled in for – are you ready for this – the Sunday night football game.  Of course this time with a glass of wine or two to help us unwind from our hectic day.  Hey, we haven’t done this much in one day in quite some time!

That was our day on The Road of Retirement.  A first class day in every way.  We absolutely enjoyed it from beginning to end.  Thanks for coming along with us.   As I say goodnight a though for all of us to ponder: