Home Is Where We Park It:   Red Barn RV Park, Alamogordo, New Mexico

Time to move out this morning.  We were only going to a park in Alamogordo so that we could visit White Sands National Monument.  With that in mind we pushed a bit and we were on the road by 9 am heading further south.

Once again we continued to climb.  Then a spotted a sign on the side of the road that stated that the elevation was 6300 feet which I though meant we were done going up.  Not on your life!  Up we went mile after mile.  Yes, we finally did start down as we got closer to Alamogordo which was just as interesting as going up.

Here are some pictures from our journey today.  The first of many mountains that we would see.

Down we go but look off in the distance soon we’ll be going back up.

See the white off in the distance?  That’s White Sands National Monument.

Look at these incredible mountains.  Thankfully, we did not have to go up and over them.

It was built in honor of PistachioLand’s founder, Thomas McGinn. After his passing in 2008, his son, Timothy McGinn erected this 30 foot sculpture in memory of his father. Tim wanted everyone who passed by PistachioLand to take note of what his dad created, a 111 acre pistachio orchard and vineyard, started from bare desert land in 1980. From the first trees planted to today, PistachioLand now is home to over 12,000 pistachio trees and 14 acres of wine grapes. 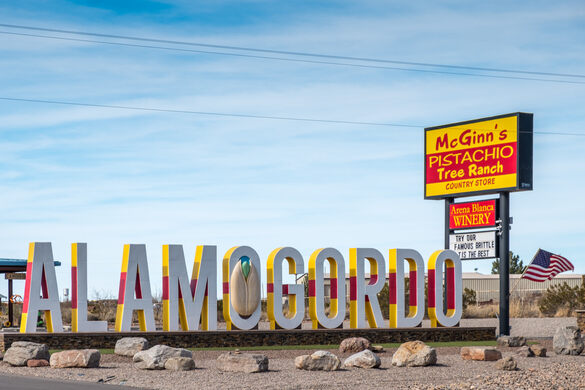 Then we were there, Desert Paradise RV Park.

We have a pull-through site, reasonably level, with FHU.  We chose a park rather than a Harvest Host location so that we had electric to run the AC.  Given it was 96 degrees when we got here today we believe it was a smart decision.  Tomorrow, we’ll be out of here in less than 30 minutes.

We’re also crossing our fingers that we make it with no issues to Deming.  Graybeard has become a wounded duck.  Today a strange noise started coming from under the shower section of Graybeard why we were driving.  It’s hard to put my finger on what it is.  It sounds metallic but I’m not sure.  It comes and goes.  Never consistent.  It’s not a clunk.  I’ve crawled underneath and can not find anything amiss so I’m confident we’ll be alright.  Once in Deming I’ll take it to a truck shop in order to figure out exactly what is going on.

That was our day on The Road of Retirement.  It was an easy trip but because of that weird noise I just can’t relax while driving.  Tomorrow before we start I will as always say a prayer for safe travels.  Ah well, it’s always something isn’t it.  We’ll take it as it comes and deal with it as it happens.