A Whirlwind Two Days – My Head Is Spinning

We Have A New LV (Living Vehicle)

You know that feeling you get when you try and cram too much into one day?  That was me until just a few hours ago when I finally got to just sit with my feet up.

Yesterday we left at the crack of dawn and headed for Apache Junction.  We had three rigs we wanted to check out and just a day and a half to do it.

Early afternoon we checked into

the only park that would accept day reservations.  Suffice to say, one day was way too many days for this park.  Way overpriced but we had no other choice.  No water pressure.  Top it all off with the most inhospitable people around.  I greeted a few and they simply turned their heads away and never said a word in return.

Once on site and hooked up so that we could get the refrigerator working we were off and running to check out two possible replacements for Graybeard.

The first one was a complete disappointment. 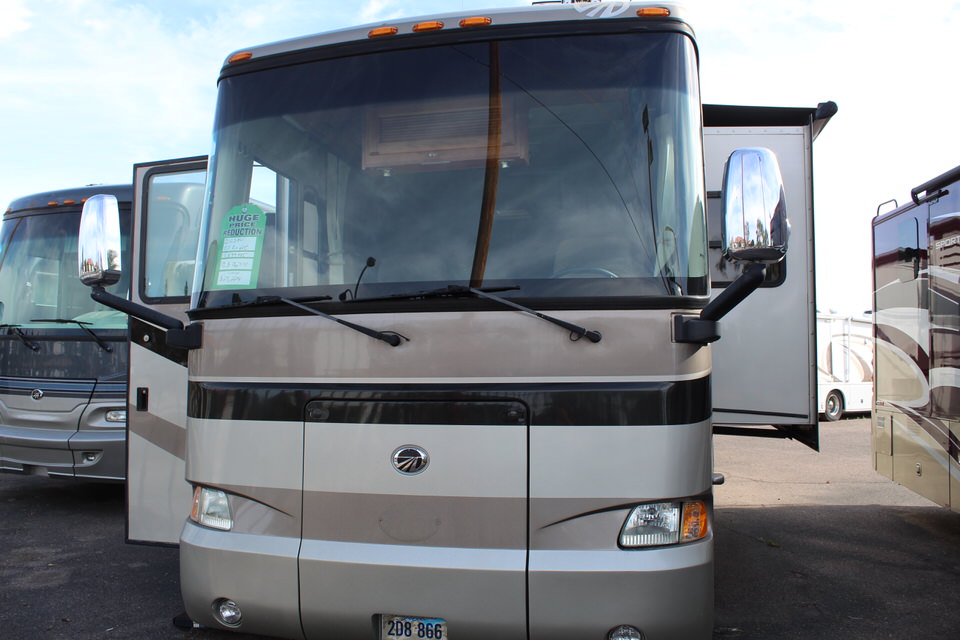 This is a 2007 Monaco Knight.  Monaco used to build a great coach so we were hoping it would ring the bell.  It had a great layout and at first appeared to be worthy of consideration.  Once again, though, when we started looking closer what we saw were broken cabinet hinges which left doors hanging half off; crown molding that had fallen off; blistered paint outside, and the list went on.  Don’t worry they said, we can fix anything for a modest price.  Really?  Scratch this one off the list.

Now we had to run because the next rig was an hour away and we were already late.  We almost missed our appointment and what a shame it would have been had we.  More about this one later.

When we finally got back to Graybeard the hour was late and we still  had another rig to check out the following morning.  Not to mention we were also due in Tucson Saturday afternoon for a NOMADS project.

Saturday morning and the third and last rig to check out. 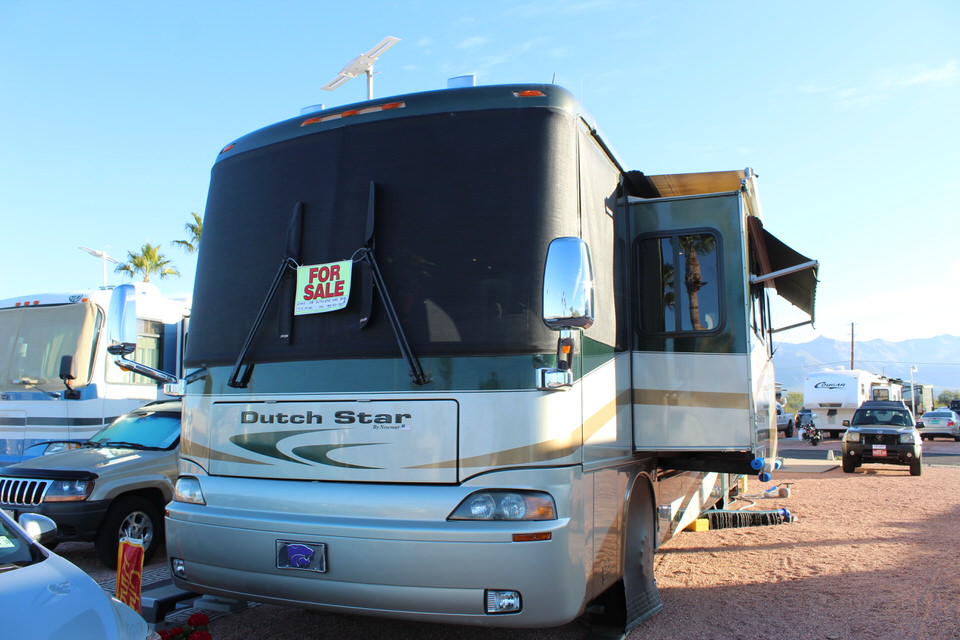 This was a Newmar Dutch Star a rig I have wanted for a long time.  But try to find one for a reasonable price that is in good condition at a price that doesn’t break the bank.  This rig appeared to be a real find.  Alas, once again it was just not meant to be.  The floor plan was only so-so, especially the bathroom area.  It was too cramped and way too small.  And did I mention the tires are ten years old?  The price was also a bit high and the owner refused to budge even a bit.  My guess, he still has a loan outstanding that he wants someone to pay off for him.  Not me.  So we walked away.  I wanted to cry.

Time to head for our NOMDS project in Tucson.

That’s where we are now, parked behind the New Hope United Methodist Church in Tucson (the third blip on our 2020 route plan).

The gang is all here and we are the only Class A.  Also, being the last one in we provided the afternoon’s entertainment.  Everyone pulled up a chair to watch me park and get set up.  I guess I did alright since not a disparaging word was said!  I will say, though, a lot of help was offered which is usually the way with the NOMAD family.

OK, back to that second rig we checked out late Friday afternoon.   That appointment we almost missed because we got stuck in traffic.  Thank goodness it’s owner waited the 45 minutes it took us to fight our way through the traffic nightmare.

It has four slides with slide toppers on each.

The floor plan is one we absolutely love.  With the two opposing slides in the front it gives us a whale of a lot of room when parked.  Yes, when the slides are in you can still pass easily front front to back.  The wood work is light and airy, and in excellent condition.

There is a new Porcelain title floor from the front through the bathroom to the bedroom.  There is new carpet on the slides and in the bedroom.  Throw rugs needed for those cold mornings or one’s toes are going to go into shock!

It has two couches that convert to beds.  This one also has a pull out storage tray in the bottom.  The one in the other slide will come out and go in Graybeard and we will install our recliners in its place.

It has a freestanding dining room table with a computer desk and slide out tray for our printer on the left side.  The table has two more leafs and two more chairs.  The couch you see in this picture is the one coming out. 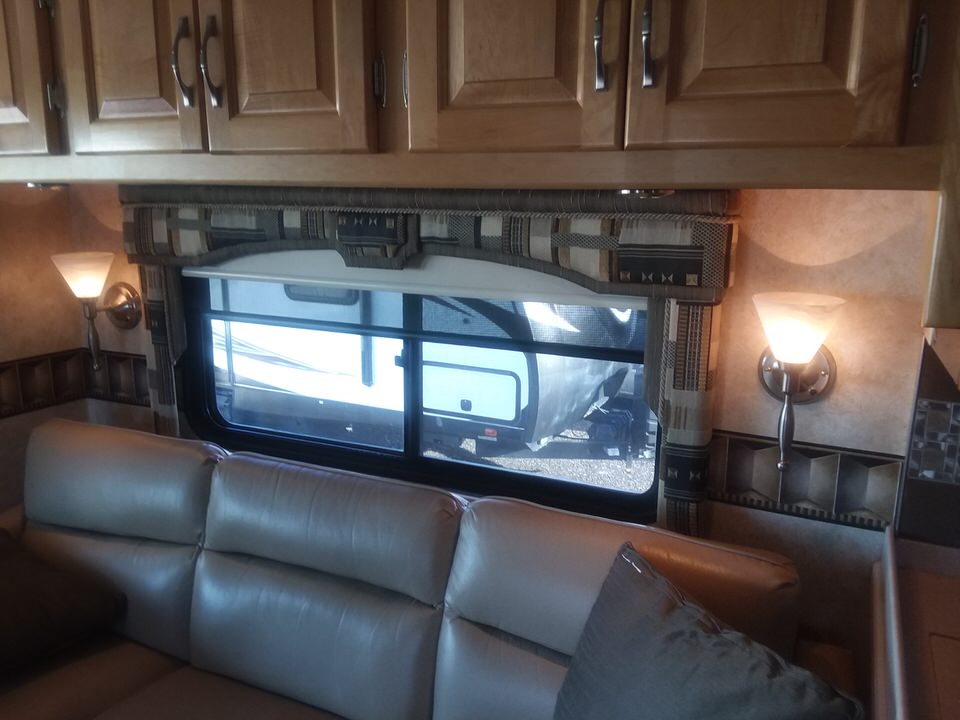 It has all new accent lights with halogen bulbs.  Yes,  those are custom day/night shades and are installed in all windows.  There are also new handles and hinges installed on all the cabinets.  We love the valances and the trim work

Look at that counter space!  All faucets, kitchen, bathroom and shower are new. 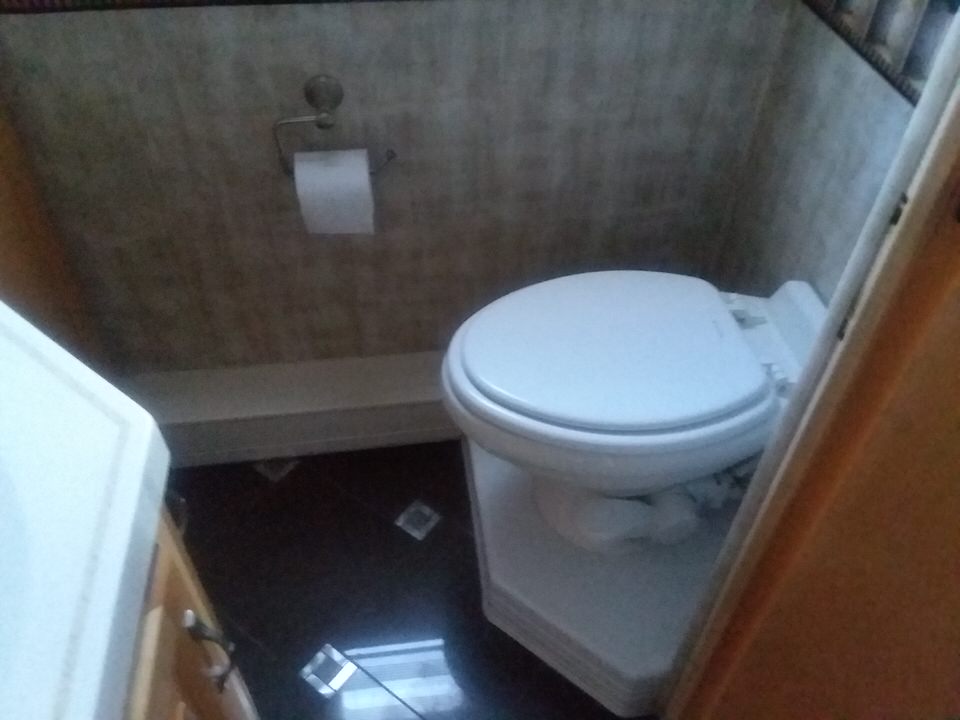 Just a small lip to get into the shower.  The shower sets back from the main hallway which we both agreed was really nice.  The shower is also a good size.

That’s a brand new washer/dryer that has never been used.

Brand new tires (less than 100 miles), and  new batteries for house and chassis.

Satellite dish on the roof that can be reprogrammed for DISH.

Updated TV’s front and back, even outside.

We took it for a test run yesterday and no issues were discovered.  It just seems to float down the highway.

Is it perfect?  Of course not after all it is a 2005.  The diamond shield needs to be removed from the front.  As with all rigs this age there is also some crazing in the darker painted parts.  It needs to have a surge protector installed.  Add to that a new patio awning.    But that’s about it.

We will do two other upgrades immediately.

We will install a fire suppression system in the engine bay. 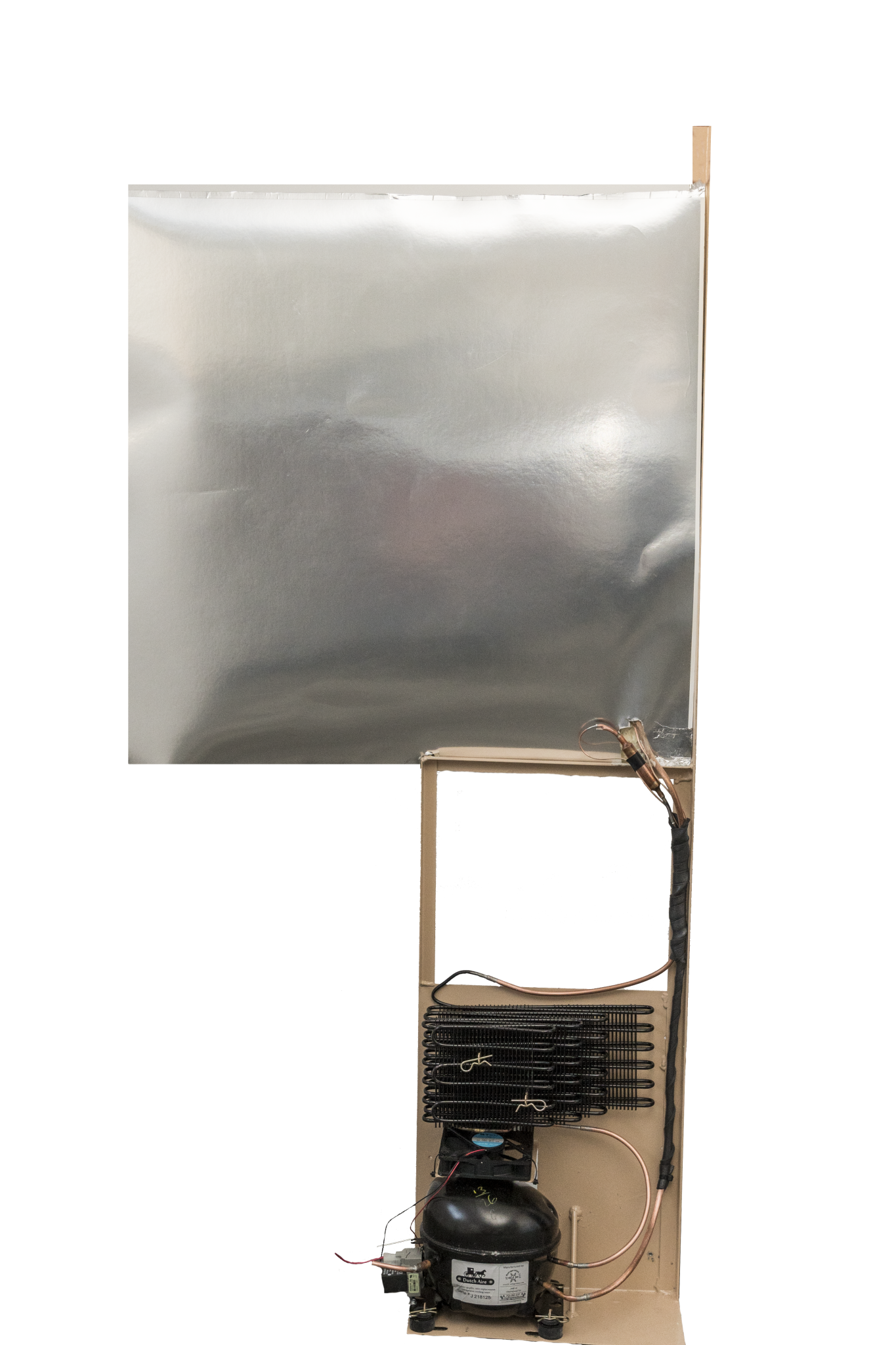 Oops, forgot one upgrade that I will do immediately.  I will convert all the fluorescent lights to LED.

I’ll also have a comprehensive examination of the RV, performed by a qualified vehicle inspector.  I’ll also take it to the mechanic who has serviced it on a regular basis for the last several years and have him give the chassis and engine a complete examination.

We also have to switch everything form Graybeard to the new rig.  Then we’ll need to transfer our plates.  Of course we need to find a place to store Graybeard until my son can pick him up.  Oh boy, there is a lot to do and so little time to do it.  Yup, as my sister reminded me, take it one step at a time.

That has been the whirlwind we have been on for the last two days on The Road of Retirement.  Thankfully, it is now over.  Time now to get ready to go back to work on Monday.

Thanks for tagging along with us the last two days.  We always enjoy sharing our journey with you and look forward to your comments, questions and suggestions.  Till tomorrow.