Well, we went exploring again and what we discovered about the secret city of Tennessee we want to share part of with you now.  We visited the Y 12 National Security Complex, we went on a three hour DOE bus tour, and we visited the Manhattan Project National Historical Park.

Today everyone knows it as Oak Ridge, Tennessee.  During WW II it was the fifth largest city in Tennessee.  By 1945 75,000 people lived here.  There were 8,000 students in the school system.  It had the third largest bus system in the U.S.  It utilized over 13 percent of the nation’s electricity.  Then it was known only as the Clinton Engineer Works.  Yet, unless you had a need to know, you had no idea that it even existed.  Even the Governor of Tennessee at that time had no knowledge of this city.

Originally some 3,000 people resided in the area in approximately 1,000 homes scattered throughout the communities of Scarboro, Wheat, Elza and Robertsville.  These were close knit communities of hardworking farmers descended from pioneers of the region.  Few automobiles could be found in the area.  There were schools, churches, stores, and a post office.  Most everyone traveled either on foot or by horseback.  Little did they know how their lives were going to be turned upside down.

The catalyst that helped to bring about the transformation of this peaceful part of the state of Tennessee into a major secret city was in a word WAR. 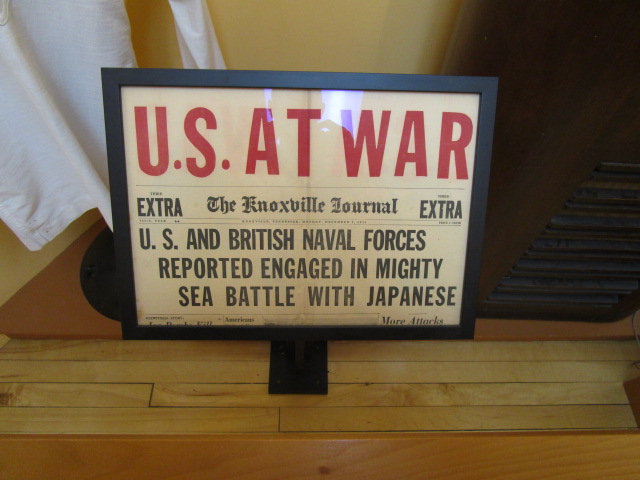 But there was more.  While war was raging around the world President Roosevelt was soon faced with a difficult decision.  Should he approve the Manhattan Project to build the first atomic bomb.  There was doubt as to whether it could be done.  The project would cost billions of dollars.  The top secret, three-year plan to build an atomic bomb was a calculated risk.  A warning, though, that Germany was already working on such a bomb convinced the President to approve the project.

Now the question became Where to build the facilities for the Manhattan Project?  After surveying several sites in different states, the Army Corps of Engineers, under the direction of General Lesile R Groves, finally selected 60,000 acres in East Tennessee. 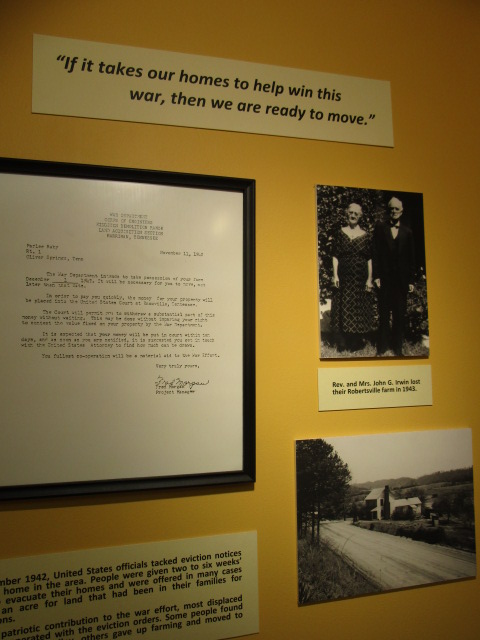 The area was selected for several reasons:

In September of 1942 the United States tacked eviction notices on every home in the area.  People were given two to six weeks to leave their homes.  All they were told was that their land was needed for a project to end the war. 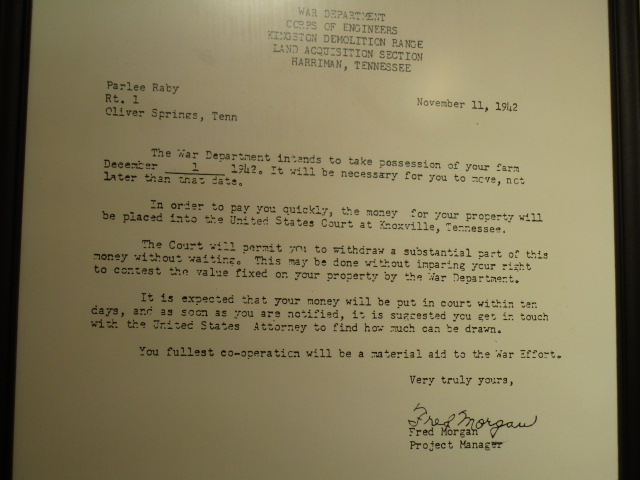 As their patriotic contribution to the war effort, most displaced families moved without a fuss.  Some took jobs in Knoxville, Clinton and other regional towns.  Some found land nearby on which to continue their lives as farmers.  Almost overnight the four small farming communities that had been there disappeared.

One of the interesting stories of this era is that of the Bethel Church.  Believing that their beloved church was going to be destroyed like so many other structures they erected a monument in loving memory of the church. 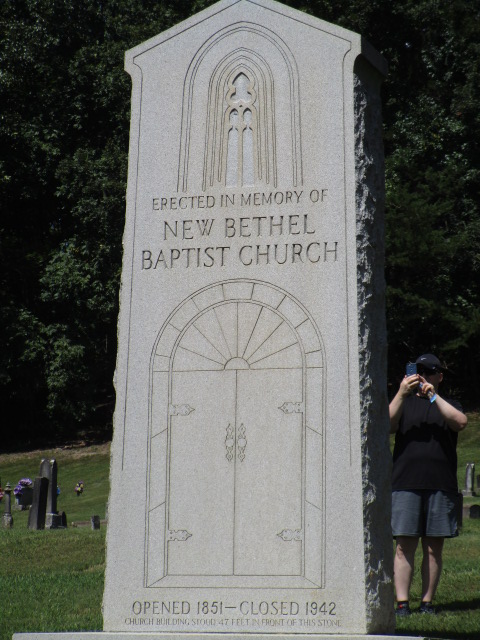 However, the church is still standing today.  The government decided that 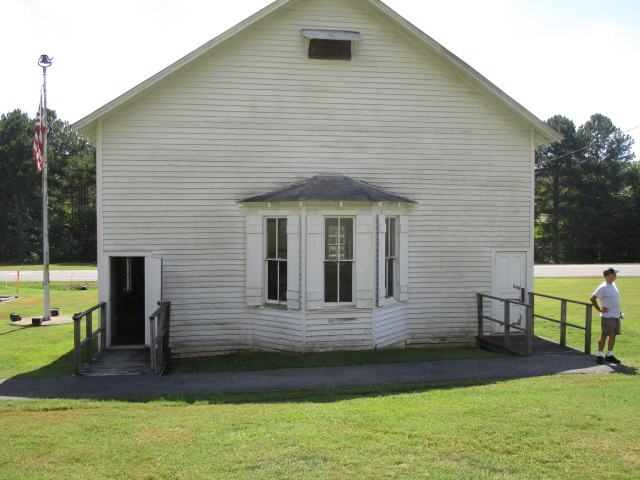 it could use the church to their advantage.  Though the congregation was no longer allowed to meet in the church, the building was spared to serve as a work place for engineers who were developing plans for the Graphic Reactor.  The church was also used for other important experiments during the Manhattan project.  Because it was large inside and had no metal structure it was ideal for these experiments. 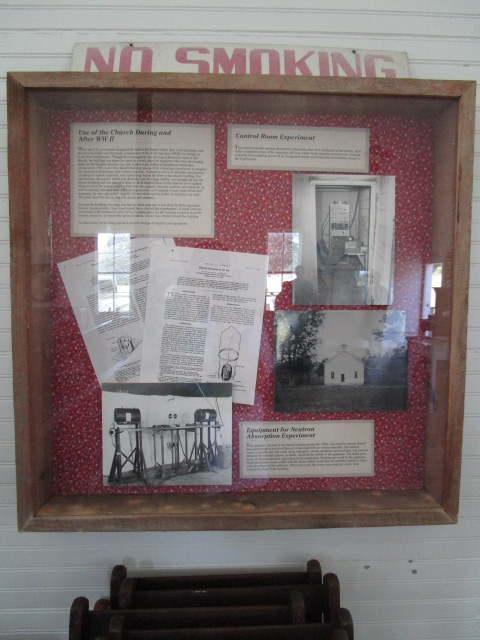 The race was now on to create an atomic bomb within three years.  Because of this even before everyone was gone and the land was completely cleared the building of the largest and most expensive secret city in the Manhattan Project had begun. 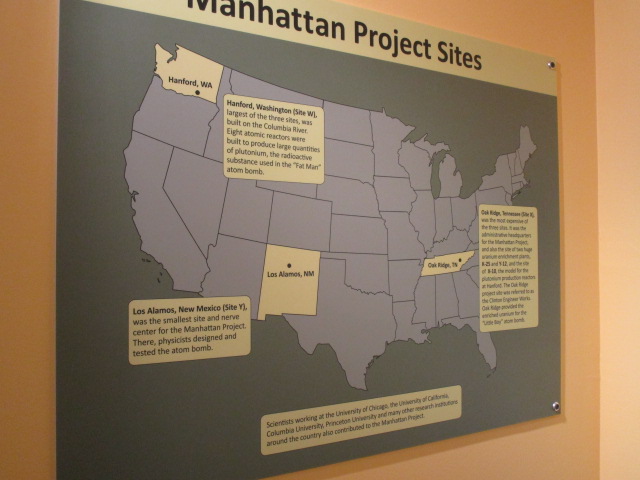 The reason that Oak Ridge existed but did not exist was of course the Manhattan Project.  The Manhattan Project was involved in collecting uranium 235 for the first atomic bomb.  Below is a map of Oak Ridge and the location of the three facilities which were there at the time.

K-25 Gaseous Diffusion Plant.  Worked on perfecting a process for the enrichment of U-235.  This plant has been torn down but the National Park Service is working on a plan to build an interpretive facility and museum on the original site. 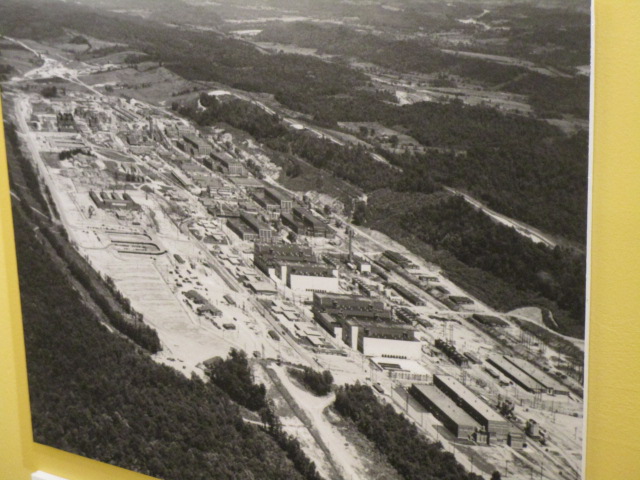 X-10 Graphite Reactor.  Worked on perfecting a process for producing plutonium from uranium. I’ll have more about this plant in a later blog. 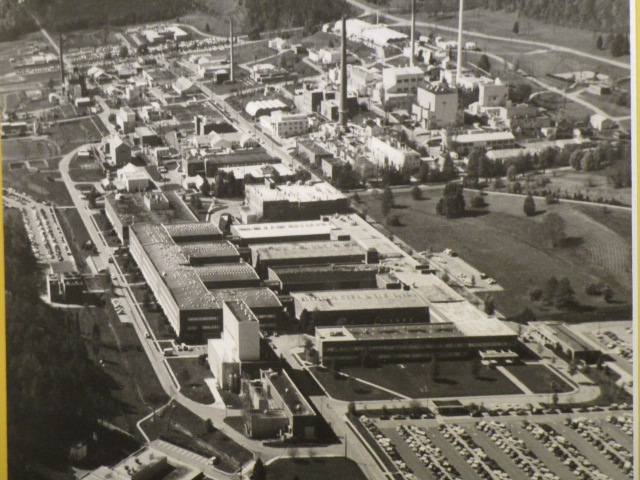 So, thousands of top scientists, engineers and military personnel were ordered to Oak Ridge.  Construction workers, secretaries, educators, and others decided to come for many reasons:  the promise of high-paying jobs, and the chance to help end the war. 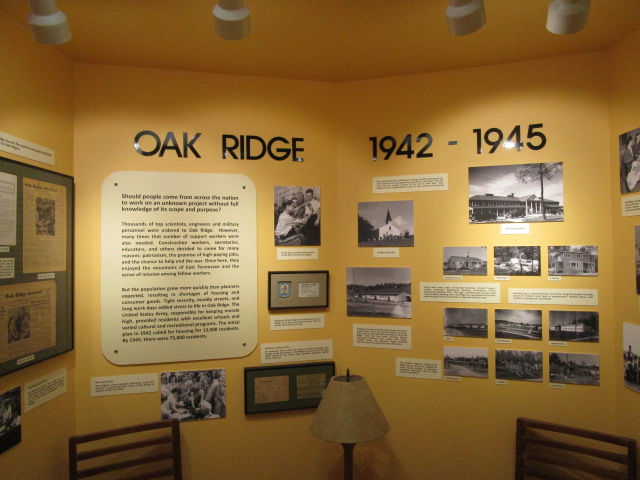 The initial plan in 1942 called for housing 13,000 residents.  By 1945, there were 75,000 residents.  It’s no wonder then that houses were constructed every 30 minutes at the height of the Manhattan Project.  There were many types of housing including:  cemesto houses (cement and asbestos homes often considered the most desirable because they were extremely well insulated), trailers, apartments, barracks, dormitories, flat tops (which were prefabricated houses) and other multiple dwellings. 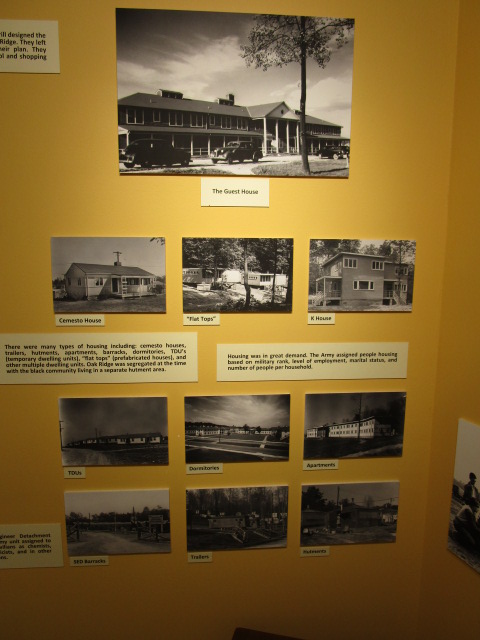 Housing was assigned based on military rank, level of employment, marital status and number of people per household. The largest family that lived at Oak Ridge was that of Mr. and Mrs. Melvin Otto Sportsman from Little Rock, Arkansas.  The family of 12 inhabited an expandable trailer at 615 Detroit Way, Gamble Valley Trailer Camp.

Singles also came to Oak Ridge.  Fresh out of colleges and universities they were recruited to travel to Oak Ridge and work at the plants (X-10, Y-12, K-25) or in other vital positions for the Manhattan Project. 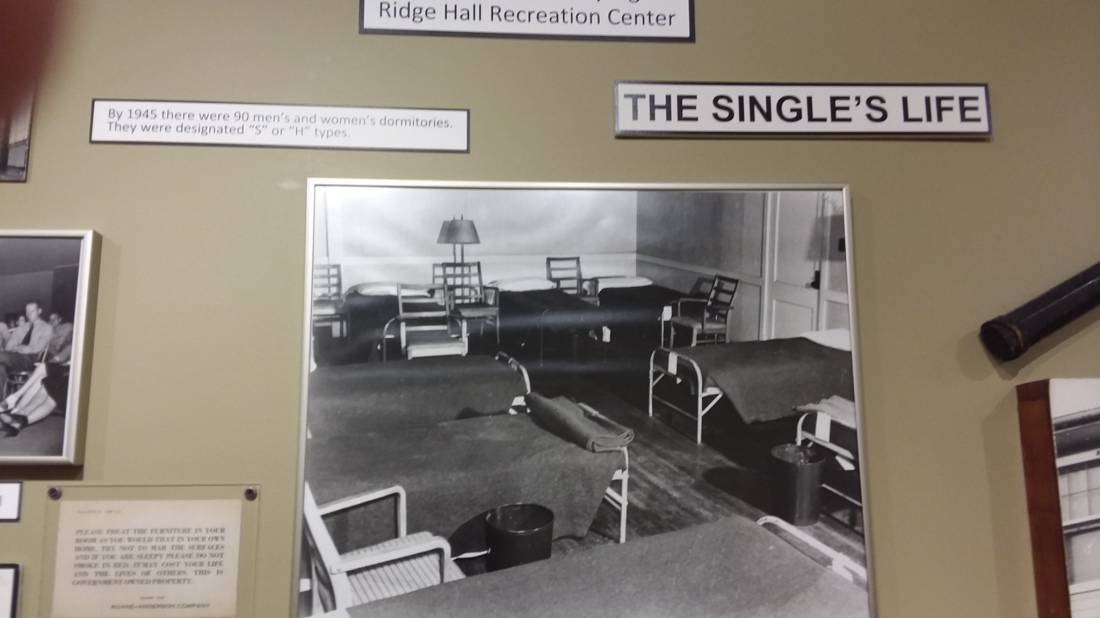 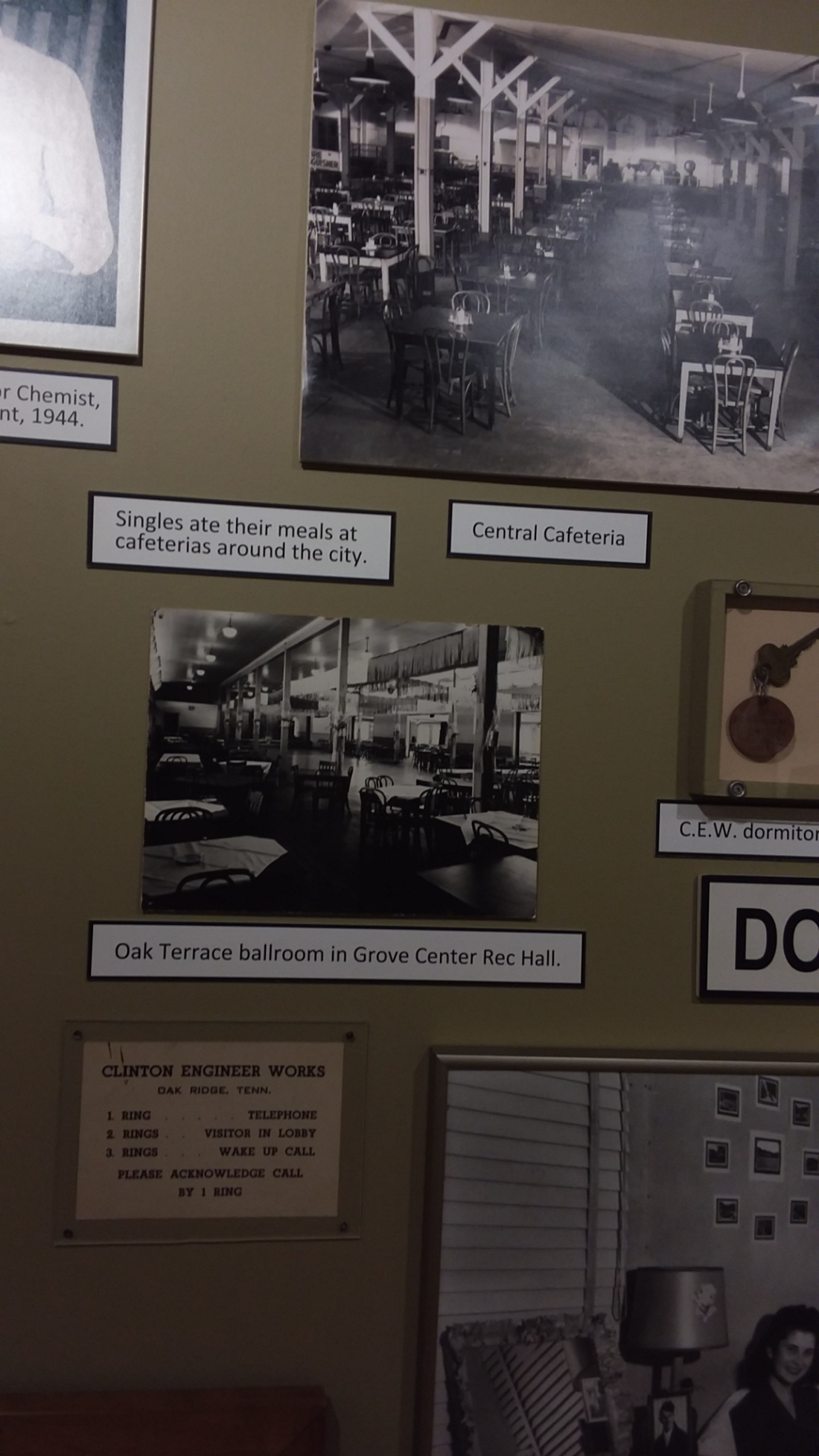 The architectural firm of Skidmore, Ownings and Merrill designed the city to attract and keep personnel in Oak Ridge.  They left trees and the natural contour of the land in their plan.

They designed each neighborhood to have its own school and shopping centers.  There were bowling alleys, movie theaters, recreational centers and the town even had its own symphony orchestra.

Security as one would guess was extremely tight at Oak Ridge.  Once the perimeters of Oak Ridge were set a 90 mile long fence was built around it.  The fence was constantly patrolled by soldiers on foot or horseback.  Guard towers were also located at strategic locations.  The Oak Ridge guard force grew to number about 1,000 men.

From 1943 to 1949 anyone coming into Oak Ridge had to pass through one of seven entry gates (the gates are still standing but no longer used) guarded by military police.  People and vehicles would be searched.

All residents of Oak Ridge over the age of 12 were required to wear ID badges at all times and they had to present them to guards upon entering the city. 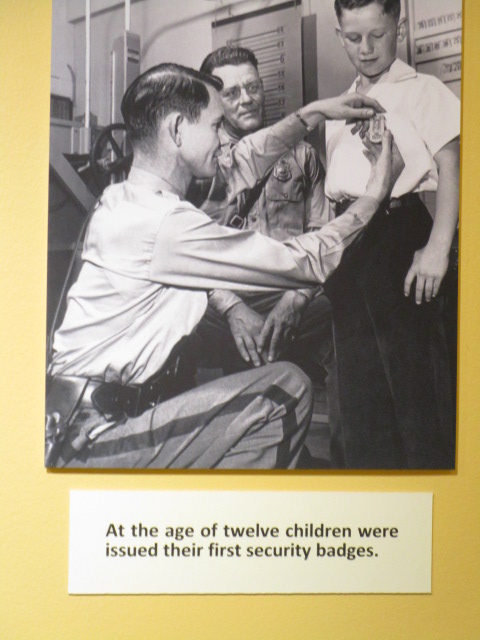 There were several other ways in the which the secret was kept.  I met and talked with a daughter whose mother worked at Y-12 during the Manhattan Project.  She stated the following: 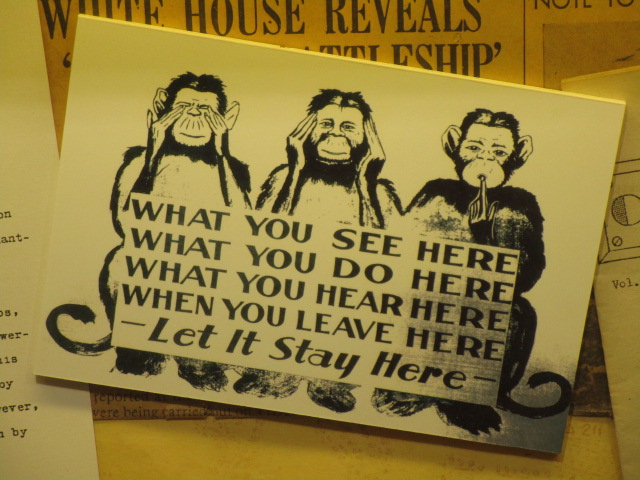 Finally, as we all know people found out about Oak Ridge.  They found out almost immediately after the first atom bomb was dropped. The secret was now out for the whole world to know.  Residents of Oak Ridge were elated.

Today Oak Ridge is an incorporated community of about 30,000 residents.  In 1953 they voted down incorporation because they feared higher taxes and the loss of benefits such as free home repair and free heating oil. In 1955, however, President Eisenhower signed the Community Disposal Bill  that provided the city with a decade of financing.  One again the vote to

Incorporate came up in 1959 and on May 5th the residents voted overwhelmingly for incorporation.  Many of the homes that they were renting they now bought.  A lot of these houses are still standing today but almost everyone has changed in some way – an addition, a garage, siding, etc.

In the end even with maximum security, enforced secrecy, and wartime rationing, many who lived in Oak Ridge during WW II will tell you that it was the best time of their life.

Why?  Because each worker, each family member had a purpose:  to win the war.  In addition, because Oak Ridge had been put together so hastily there were few social traditions or confining customs to hinder communication and community participation.  Finally, it became a campus-like environment of enthusiasm and friendship.

Well, the secret is out, the secret city of Tennessee known as Oak Ridge.  Thanks for joining us our journey of discovery.  We learned so much and came away with a new appreciation for the sacrifices that so many made in order to bring the war to an end.  The story of Oak Ridge is truly a remarkable story that needs to be told to one and all.

Time to sign off and wish everyone a great weekend.  Whatever you may be doing or wherever you may be going we hope you enjoy.  In closing let me leave you with this: 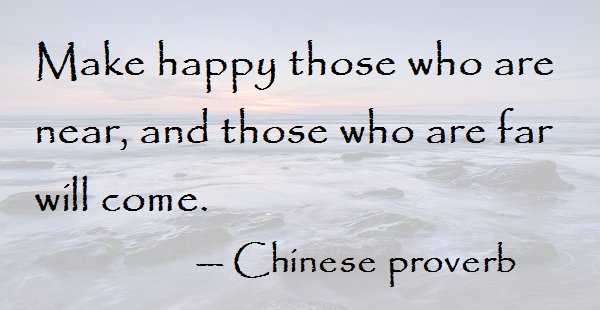